The HTC Magic is the second EVER Android Phone and first launched on Vodafone in Europe on May 1st. With a sexy, slim form factor, 3.2 inch touchscreen and beautiful HVGA resolution, the Magic greatly increased the physical attraction to Android.

The 3.2 Megapixel camera works wonders for picture happy phone fans and NEW with the HTC Magic at the time of launch is the introduction of Video Recording on the Android platform.

Another feature brand new to Android that is ushered in with the HTC Magic is the software keyboard. The Magic satisfies touchscreen lovers by being Android's first touchscreen only device and therefore requires a software keyboard, something which was absent from the first Android phone. The HTC Magic also has a trackball for precision navigating when browsing the web and other applications.

The HTC Magic is destined to dazzle the mobile world by pulling off the type of tricks that only Android can... congratulations to HTC on coming in at #1 and #2 with the first Android phones on the market! 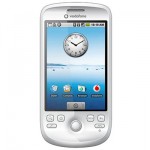 A few of you have raced to your computers and made no delay in letting us know that your HTC Magic has pulled down an update and it wasn’t just for maintenance: you got Froyo! Those on Vodafone might be late to the party, but the saying goes that you’re better late than never. It …

HTC Magic on Rogers Gets Update to Android 2.1

There is no denying the people what they want, and when they get vocal about it chances are they will get their way. At least that is the case with Rogers and Android 2.1 for the HTC Magic. A small but vocal community cropped up to fight for their right for updates on the handset …

It was once believed that the T-Mobile G1 (aka Android Dev Phone 1 in the developer circuit and HTC Dream in other parts of the world) could never die: it was, after all, the first Android device ever created that brought about a ridiculous amount of support from nearly every major player in every part …

HTC Magic to Receive Android 2.2 According to SFR

Second-ranked French carrier SFR has announced that the HTC Magic will receive an update to Android 2.2 (Froyo) later this summer along with another of their Android phones, the Nexus One. This shouldn’t come as too much of a shocker considering the Magic’s US counterpart, the T-Mobile myTouch 3G, has also been pegged as a …

Mary Pretotto – a Twitter-based support rep from Rogers – has confirmed that the HTC Magic and the Sony Ericsson Xperia X10 will both be receiving upgrades to Andorid 2.1 at different points this year.She’s stated that HTC will be delivering their 2.1 update for the Magic for testing at the end of the June …

Before you read the rest of this post, watch the video: the music will make you happy. Anyway, Android-France has a video showing an unofficial port of Froyo on the HTC Magic. We knew the XDA scene was hard at work on SDK image-based ports for the Magic/T-Mobile MyTouch 3G already (as well as the T-Mobile …

Rogers has officially launched its Social View line of Android phones, pooling the social-networking powers of several handsets that use consolidated info streams from the likes of Twitter and Facebook. The phones being promoted are the Sony Ericsson Xperia X10, the oft-forgotten LG Eve, HTC Magic+, the Motorola Quench (better known as the CLIQ XT), …

Unfortunate news for some in the UK: Vodafone has decided to drop the HTC Magic from it’s range of Android devices, leaving only the HTC Tattoo for now.A moderator from the Vodafone eForum said:I just wanted to pop on and say the Magic hasn’t officially been discontinued yet, but is coming towards the end of …

Good news for everyone rocking a Vodafone HTC Magic – it has been confirmed by Vodafone that there will be an update to Android 2.0. YAY! Although an exact launch date has not yet been officially announced, I would speculate that it will be at some point during Q1.. as there are several other long …

So for you HTC Magic users out there that have been operating without any Sense, HTC Sense UI that is, today’s the day that HTC finally released ROM Version:3.05.401.3.  Hit up HTC’s download page for all the necessary instructions and downloads.Anyone either already update their Magic or about to? Let us know how it goes …
See All