The HTC ChaCha - announced alongside the HTC Salsa at MWC 2011 - became one of the first high profile "Facebook Phones". Adorned with a blue hardware button sporting the Facebook "F", it glows whenever the user can easily transform their current mobile activity into a Facebook update of some sort to share with friends.

With a 2.6-inch screen, portrait QWERTY keyboard, 5MP rear camera and front camera for video chat, the ChaCha is an affordable social media device aimed at giving the Facebook nation a phone they'll love for its convenience and ability to easily share content.

There was a time when Android phones were coming out so often that companies were using anything and everything for names. Rocks, stones, metals, liquids, animals, weather conditions, an even emoticons were used as inspiration.

HTC’s on a roll with their bootloader unlock program as they have added support for six new devices today. Those devices include the  HTC Desire Z, ChaCha, Aria, DROID Incredible, Status, and T-Mobile G2. While some of these devices already have community-developed methods it’s always good to see official support from the OEMs. Head to …

Looks like that huge campaign against HTC regarding unreleased kernel source worked – a lot of goods just popped up on their developer site today. We have the EVO 3D, HTC Sensation 4G, the HTC EVO 4G’s Gingerbread update and the DROID Incredible 2’s Gingerbread update. The HTC ChaCha and Salsa have also received some … 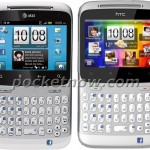 Though it still hasn’t been “officially” announced, it has been no secret that AT&T plans to carry their own version of the HTC ChaCha. We learned that fact concurrently with the unveiling of the phone at Mobile World Congress in February. A recent FCC filing helped solidify that fact, but a newly leaked image shows …

When the HTC ChaCha first showed up at Mobile World Congress back in February, it was accompanied by a spec sheet that promised a 600MHz processor. Fast-forward to the present day with the ChaCha set to launch this month, and HTC has updated their product page for the Facebook-laden handset to list a chip bumped … 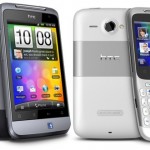 The HTC ChaCha and Salsa — those unique new Android handsets sporting a physical Facebook button for one touch access to the social networking giant — are poised for launch at the end of June, but a leak of the final software build for each handset is giving us an early look at what we …

T-Mobile UK already tipped us off to the June release of the HTC ChaCha, but according to a new Amazon UK pre-order, HTC’s second Facebook-laden phone will launch in the same timeframe. Both the HTC Salsa and ChaCha are listed for a June 26th release date, Facebook button and all. The keyboarded ChaCha is priced …

HTC ChaCha Poised for June Launch in the UK

The announcement of HTC’s “Facebook” phones at Mobile World Congress came with a preview of two not-ready-for-prime-time devices and a promise of a Q2 release. While that seemed unlikely, T-Mobile UK now hosts a coming soon page for at least one of those devices, the HTC ChaCha, with a release timeframe of June. So far, …

HTC ChaCha Will be ChaChaCha in Spain

As if the name ChaCha wasn’t bad enough, a revelation dawning on the HTC marketing staff has forced their hand on renaming the handset in Spain. No, it isn’t totally thanks to the recent lawsuit levied against the handset manufacturer regarding the name, either. It would be the fact that ChaCha happens to be a … 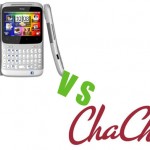 It’s nothing new to hear about patent and trademark infringements in the Android market. Whether it be OEMs or developers, someone’s registered patent or trademark is always being infringed upon. Even Google “stole” Android at some point. That’s been settled with some ridiculous amount of money, of course.And now HTC and Motorola find themselves in …
See All