The Dell Aero will prove to be AT&T's second Android powered handset and while it isn't technically Dell's first Android phone, it is nearly identical to the Dell Mini 3i which WAS the manufacturer's first Android Phone (previously launched in China). Now Dell is bringing their Android wares to America, and they've significantly customized the UI on what AT&T is calling "the lightest Android Phone" upon launch:

With a 3.5-inch screen, 5MP camera, Flash Lite and simplistically enjoyable design, the Dell Aero stands to be an attractive option for AT&T customers.

We’ve been waiting for this device to launch for a long while and AT&T’s been extremely quiet regarding its availability. It also hasn’t gotten the leak love we come to expect, but the Dell Aero’s finally available starting today for $99.99 on a two-year contract ($299.99 without). The device has a 3.5-inch capacitive display with … 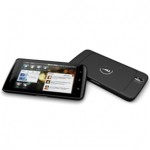 The window on pre-registration for the Dell Streak pre-sale is closing today, July 27th, and while an actual street date remains absent from the list of things we know about the Dell Streak’s US release, we can now check off on and off-contract pricing. Those that signed up to be part of the pre-sale will …

The Dell Aero had already gotten a tentative release date alongside its bigger tablet brothers: its landing date was originally believed to be June 2010 for AT&T. Now, the device has been approved by the FCC just in time to meet that unofficial deadline. Its name has been confirmed to be the Aero by the …

Probably the entity to make the smallest splash of the huge Dell leaks we were treated to yesterday, the Dell Aero will still get its chance to wow and impress you. While it definitely doesn’t achieve either of those things, we’re still happy that some of its specs are finally beginning to come together.It has …

Look what just came rolling through the pipeline: Dell could be bringing us even more tablets in 7-inch and 10-inch flavors! The Streak line looks to extend far past what they’re doing with the Dell Mini 5 (now known as the Dell Streak 5) and I am not one to argue. According to Engadget’s sources, …

Epic tech fiend Joshua Topolsky from Engadget got his mittens on the Dell Aero and the outcome wasn’t good. He immediately noticed the software keyboard was one of the worst ever and his analysis continued down that slippery path. AT&T bloatware, lack of Google applications, weird home/back button, medium speed UI… he simply wasn’t digging …
See All