The altek Leo was announced in the summer of 2010 with little info available. While there is still not much available about exact release date and specs, we know it should be coming around Q1 of 2011.

The altek Leo is an Android device with a 3.2 inch touchscreen. Perhaps the most fascinating thing about it, however, is that it comes with a 14 MP camera with Xenon flash. It isn't slated for release in the states as of yet, but this is definitely a phone for photography enthusiasts everywhere. Photos have never looked better on a phone. 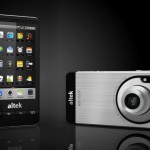 Altek Leo Bringing its 14MP Camera to Europe in Early 2011

We have been hearing about the Altek Leo off and on for the past few months, and even though the phone will carry Android 2.1 and a screen on the smaller size at 3.2-inches any possible hardware and software shortcomings you could think of are immediately forgotten in light of the phones epic 14MP camera …

Remember that Altek phone that popped up looking prepped for Android and featuring a huge honking piece of camera glass? The Altek Leo camera-phone was shown off at CommunicAsia 2010, just as was promised. Revelations include Android 2.1 with a Froyo update in the pipeline, a 1/2.3-inch CCD image sensor rated at 14MP, and a …

Will this 14MP Monster Come with Android On Board?

Now if this isn’t the biggest lens I’ve ever seen on a cell phone, well then I probably haven’t seen enough cell phones, but the Altek Leo boasts a 14MP camera with 3X zoom. And a real big lens. At first I thought this was simply a digital camera, but sure enough it’s a smartphone. …
See All