Smartphone maker Alcatel announced a new addition to their ONETOUCH smartphone lineup during CES 2015. The Alcatel PIXI 3 series is an affordable set of smartphones ranging from a pocket-friendly 3.5-inch display, to a larger 5-inch display.

They offer varying price points and connectivity (the 3.5-inch doesn't include 4G LTE) but the real kicker here is that the PIXI 3 is "OS-agnostic," allowing the user to choose whether they'd like the phone to run Firefox OS, Windows, or Android. 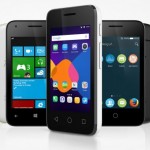 Alcatel doesn’t exactly excite the pants off us whenever they announce a new phone, but there are three good reasons to take notice of their latest lineup of affordable smartphones. The company has also announced a new smartwatch.
See All