Poco Watch review: a basic smartwatch at an affordable price

Poco is a company best-known for their smartphones, especially with devices like the Poco F1 which was a true flagship killer. Recently, the company started to expand its product offerings and has finally dipped its toes in the smartwatch game by launching the Poco Watch.

It’s a very simple smartwatch and has all the basic features you might expect, and it also comes in at a very affordable price, so the question is, is this a smartwatch for you? Read the rest of our review to find out. 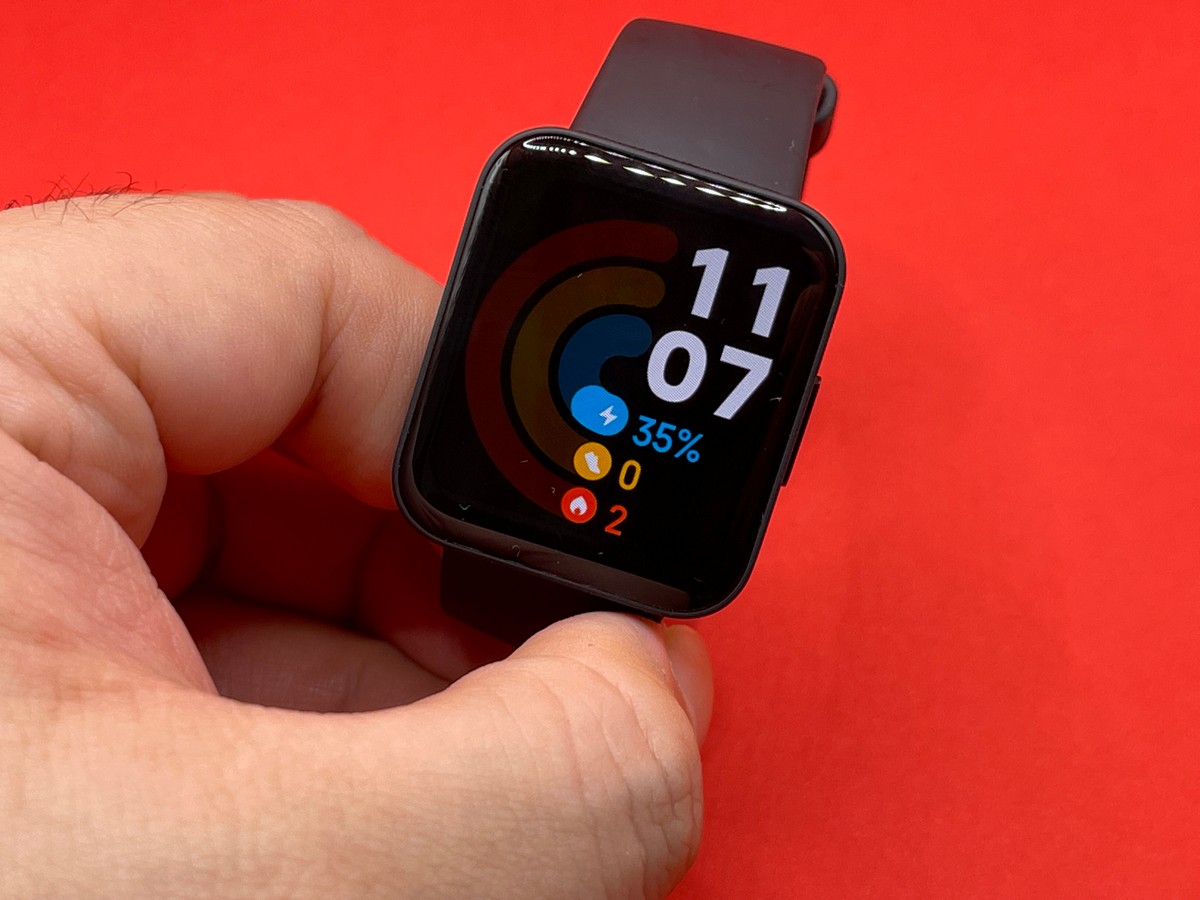 Poco has kept the design of the Poco Watch extremely simple. It features a square chassis and a 1.6-inch (320×360) AMOLED display that’s slightly curved on all sides, but the chassis is raised ever so slightly that you can feel a lip around the display, so it isn’t as seamless compared to other wearables like the Apple Watch.

The display itself is nice and bright and springs to life when you raise the watch to your wrist. There is one thing that we didn’t really like and that is there is no tap-to-wake function. There is a double-tap-to-wake but it isn’t as convenient as a single-tap, and it is disabled by default. There is an option to enable the always-on display but it will come at the expense of battery life. 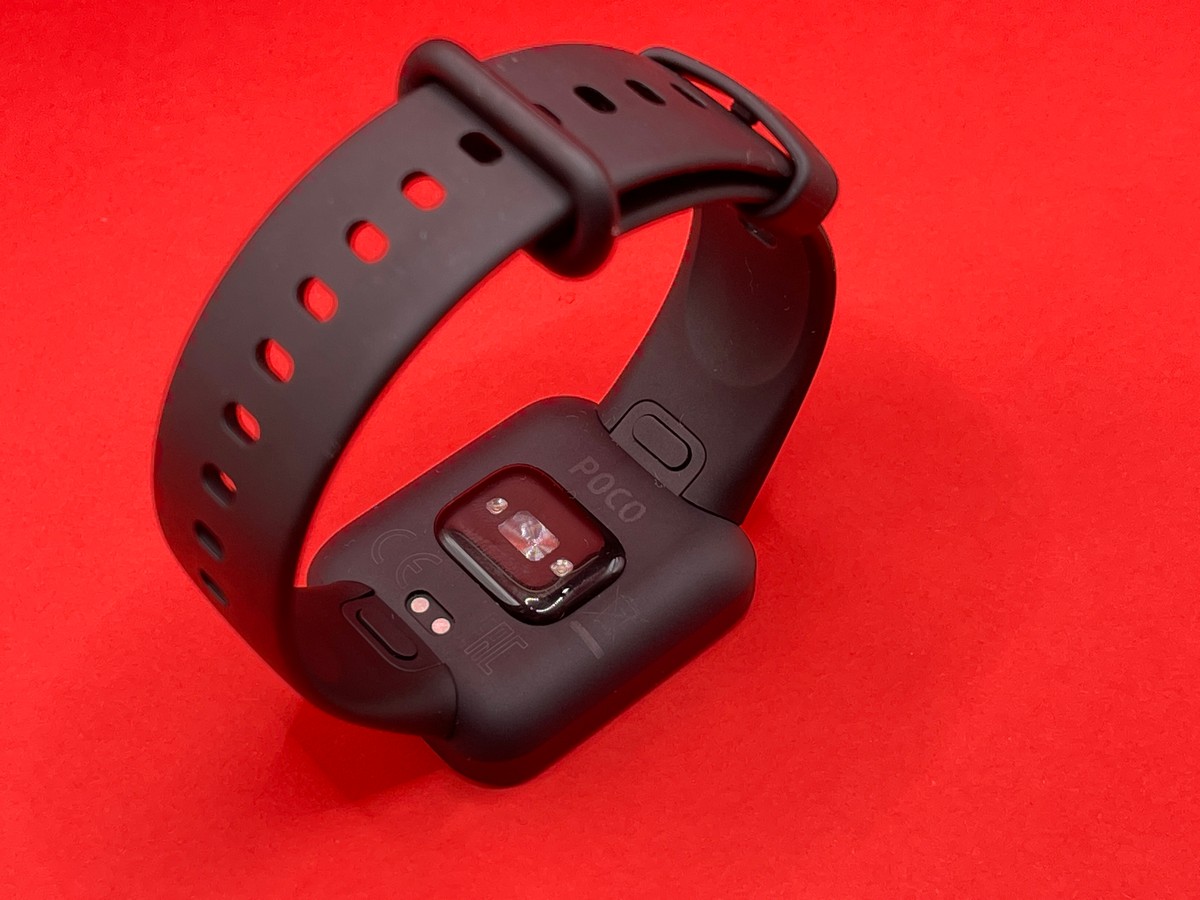 While it might not be a big deal for some, it’s one of those small quality-of-life features that we feel would have made the watch a lot better to use. We wish the watch would have been offered in different display sizes because if you have relatively big hands or big wrists, it does look a little awkward, but it would be hard to fault Poco for that since if I were shopping for a smartwatch, I would have picked something a little larger.

The strap is made from what I can only assume is silicone and feels pretty thin. There is a small plastic buckle that holds the watch together. It doesn’t exactly scream high quality or luxury, but then again, that’s probably not what Poco was intending. All in all, it’s serviceable and it gets the job done. 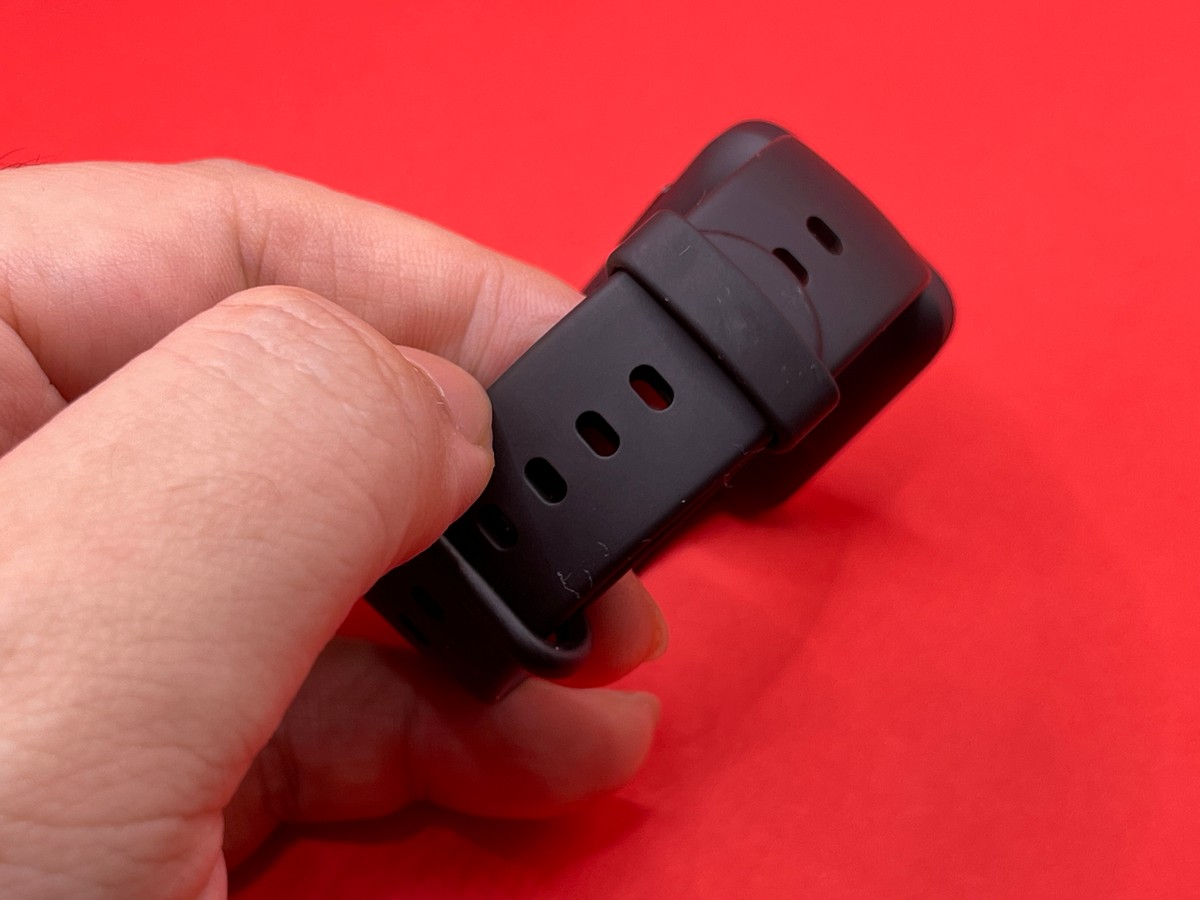 The watch itself together with the strap is extremely light and pretty thin and weighs just 31 grams, so if a low-profile smartwatch is something you’re interested in, this could be worth your consideration. 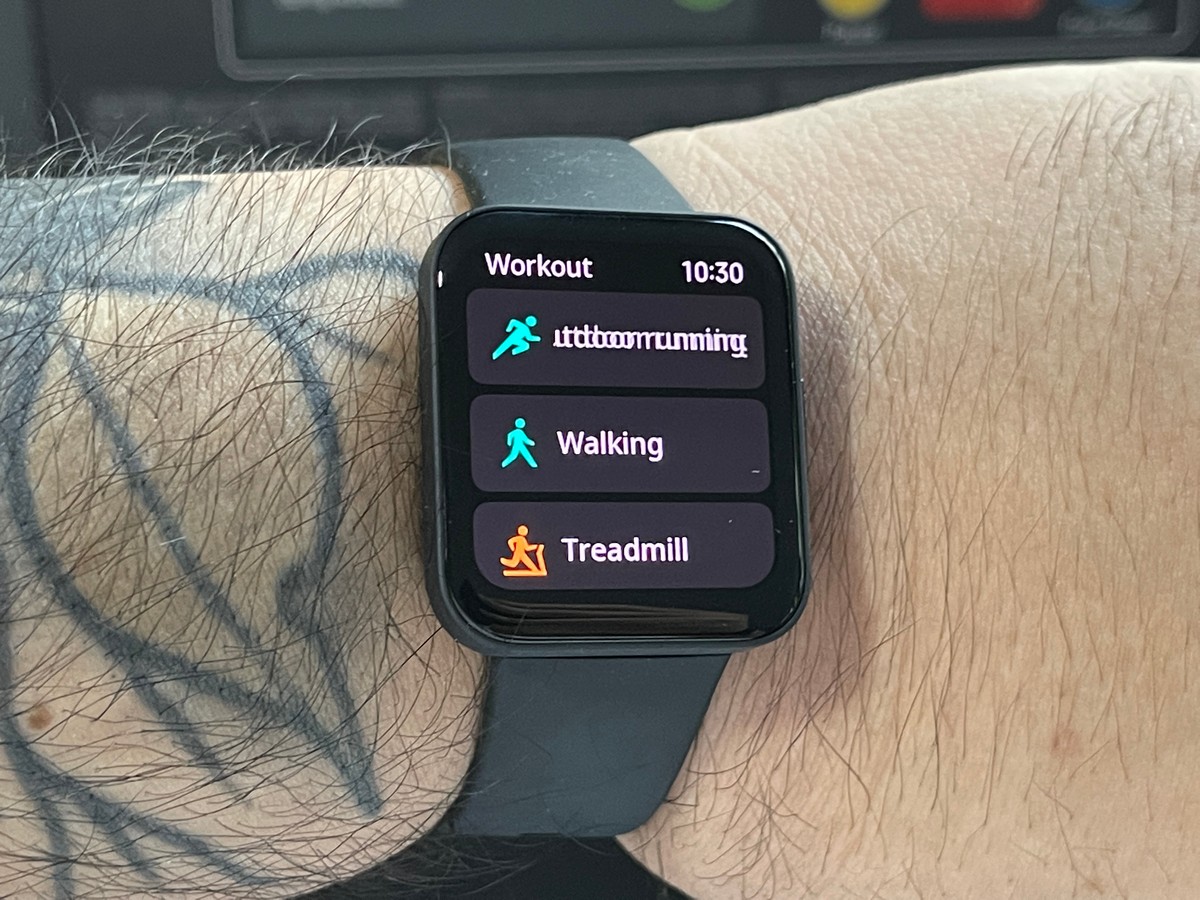 One of the primary draws of a smartwatch is that it can track your workouts, and the Poco Watch does it just fine. There are a bunch of your more common workouts that are readily available to choose from, but you can go deeper into the menus to find less common workouts. If you can’t find what you’re looking for, there is an open workout option.

The Poco Watch uses the Xiaomi Mi Fitness app (which you’ll have to pair with the watch during the setup process) to help track and log your workouts so you can refer to it later if you wish. It tracks pretty much all the data you might expect from a smartwatch, like your heart rate during a workout where it marks the highs and lows and average; your calories; time spent during the workout; standing time; steps taken, and so on. 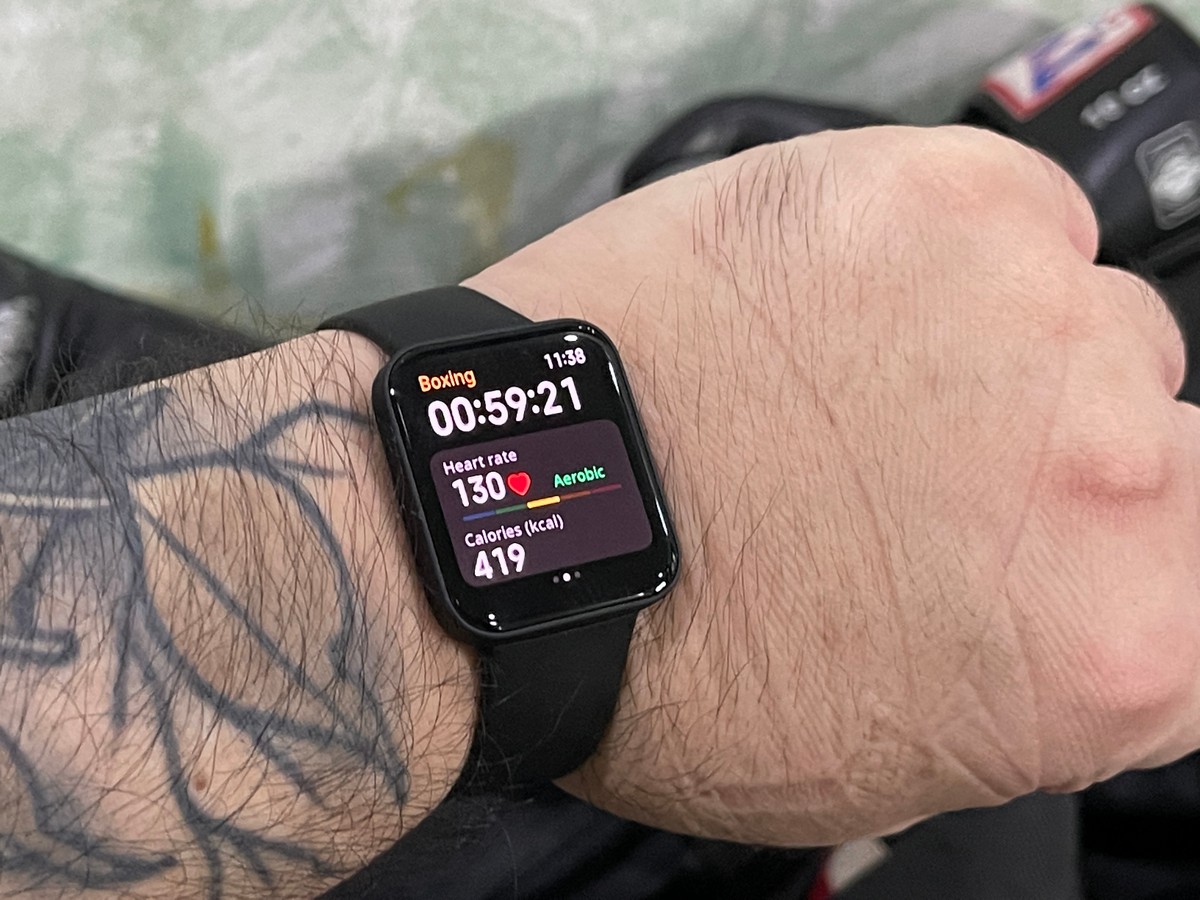 I wore the Poco Watch during a workout alongside my Apple Watch just to see how it fares side-by-side. While I wouldn’t necessarily say the Apple Watch is more accurate, based on the couple of workout sessions I had with both watches tracking my exercise, I was pleasantly surprised to find that both devices were pretty close within a margin of error to each other.

This might be reassuring for some users who might be coming from a different brand or model to know that despite the Poco Watch’s price, its sensors and tracking of your workouts is pretty consistent across the board.

The Poco Watch also comes with a built-in SpO2 sensor that is used to track your blood oxygen levels, pretty cool given its price. There is no ECG so if you want better tracking and monitoring of your heart, you’ll have to look elsewhere.

Another surprising feature that we wouldn’t have expected from such a budget wearable is a multi-system standalone GPS system that can tap into GLONASS, Galileo, and Beidou, perfect for hikers or those who prefer to run outdoors.

Battery life on the Poco Watch is amazing and there’s no denying it. Poco advertises that the watch can get up to 14 days of battery life and to help maintain that, the company does offer up some cautionary messages when enabling certain features.

For example, opting to use the double-tap-to-wake feature will result in more battery drain, along with enabling the always-on display, but if you use the watch as Poco had intended, battery life is most definitely not an issue.

I charged the watch fully when I first received it and left it idle for a couple of days before taking it on my first workout. I expected to see a drop in battery life after the first workout but to my surprise, it remained at 100%, so I honestly wouldn’t be surprised if the watch’s battery life can live up to Poco’s claims, or at least come pretty close.

The watch features a 225mAh battery and is bundled with a proprietary magnetic charger that’s nothing to write home about, but it gets the job done. 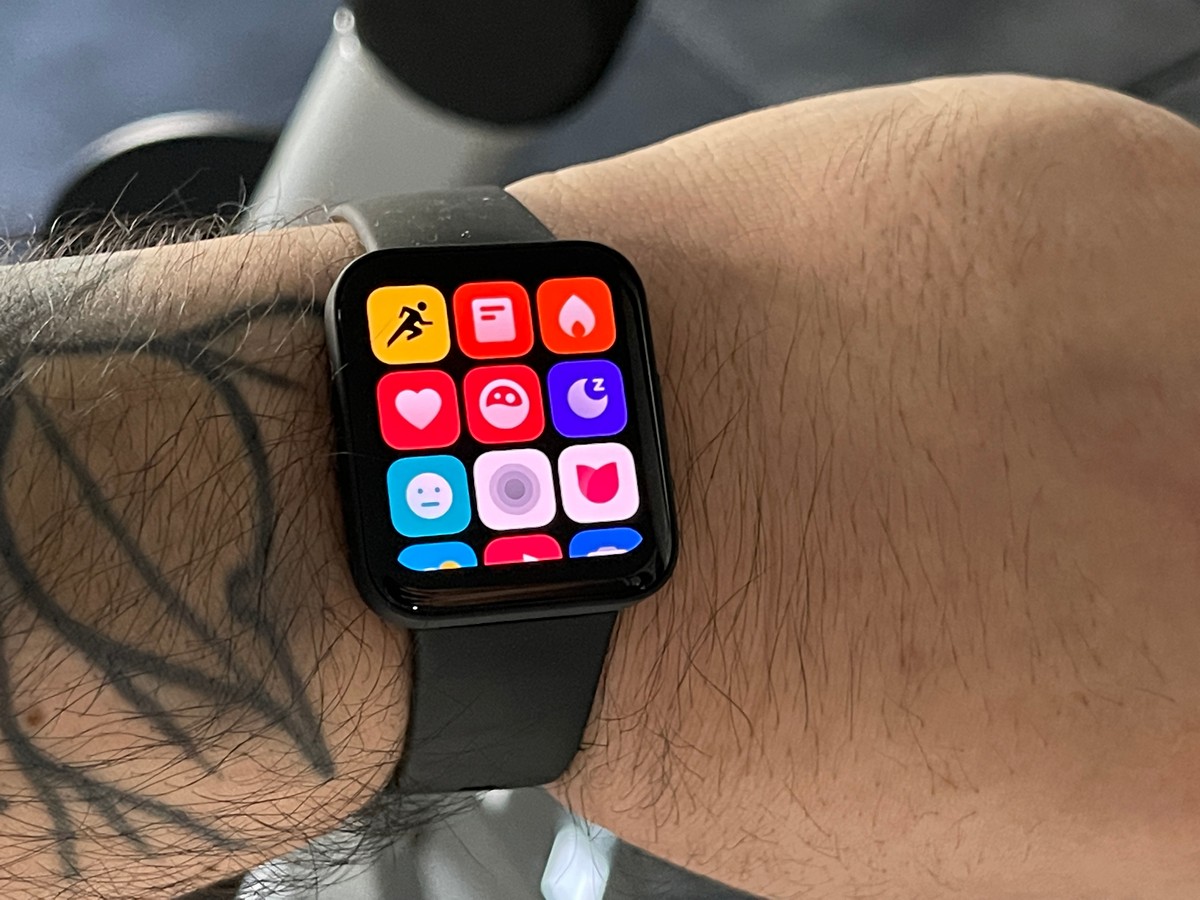 The Poco Watch runs a proprietary operating system developed by Xiaomi. This means that if you were hoping to tap into a larger ecosystem like Google’s Wear OS, you might be a bit disappointed on that front.

The software itself is functional and has all the apps and basic features you might need. It has a stress tracker and sleep tracker if those things are important to you, along with all the other features you might expect to see from a smartwatch.

This includes timers, alarms, a breathing app, a compass, music, a weather app, and there’s even an app designed with women in mind to help track their cycles. There’s also a camera remote app that lets you use the watch as a camera remote when paired with your smartphone so you can take pictures without being behind the camera.

Poco has also included a bunch of watch faces that you can choose from and customize to your liking by uploading your own photographs.

One thing to note though is that the software felt a bit sluggish during our use. You can see a bit of stutter when launching apps or scrolling through the menu. We’re not sure if it’s a hardware or software issue, but it’s something to keep in mind.

The Poco Watch is clearly not designed to compete against higher-end smartwatches like the Apple Watch or Samsung’s Galaxy Watch series. With a price tag of around $80, it is being targeted at consumers who are on a budget but want a smartwatch, but don’t let the price tag trick you into thinking it’s nothing but a cheap watch.

It is an extremely functional smartwatch that comes with features that you would expect to find in a high-end smartwatch, so if you’re not that fussy about design and other fancy features and want a smartwatch that can get the job done and then some, the Poco Watch might be the watch for you.