Gaming on Android smartphones is a bit of a mixed bag these days. While your average midrange smartphone is more than capable of playing Candy Crush and can deliver a smooth experience when playing Call of Duty Mobile, it’s incredibly difficult to find a smartphone that can max out the settings on a game like Genshin Impact without taking a performance hit.

Enter the Redmagic 7 Pro – an $800 gaming-centric smartphone that outperforms even the most expensive Android competitors. 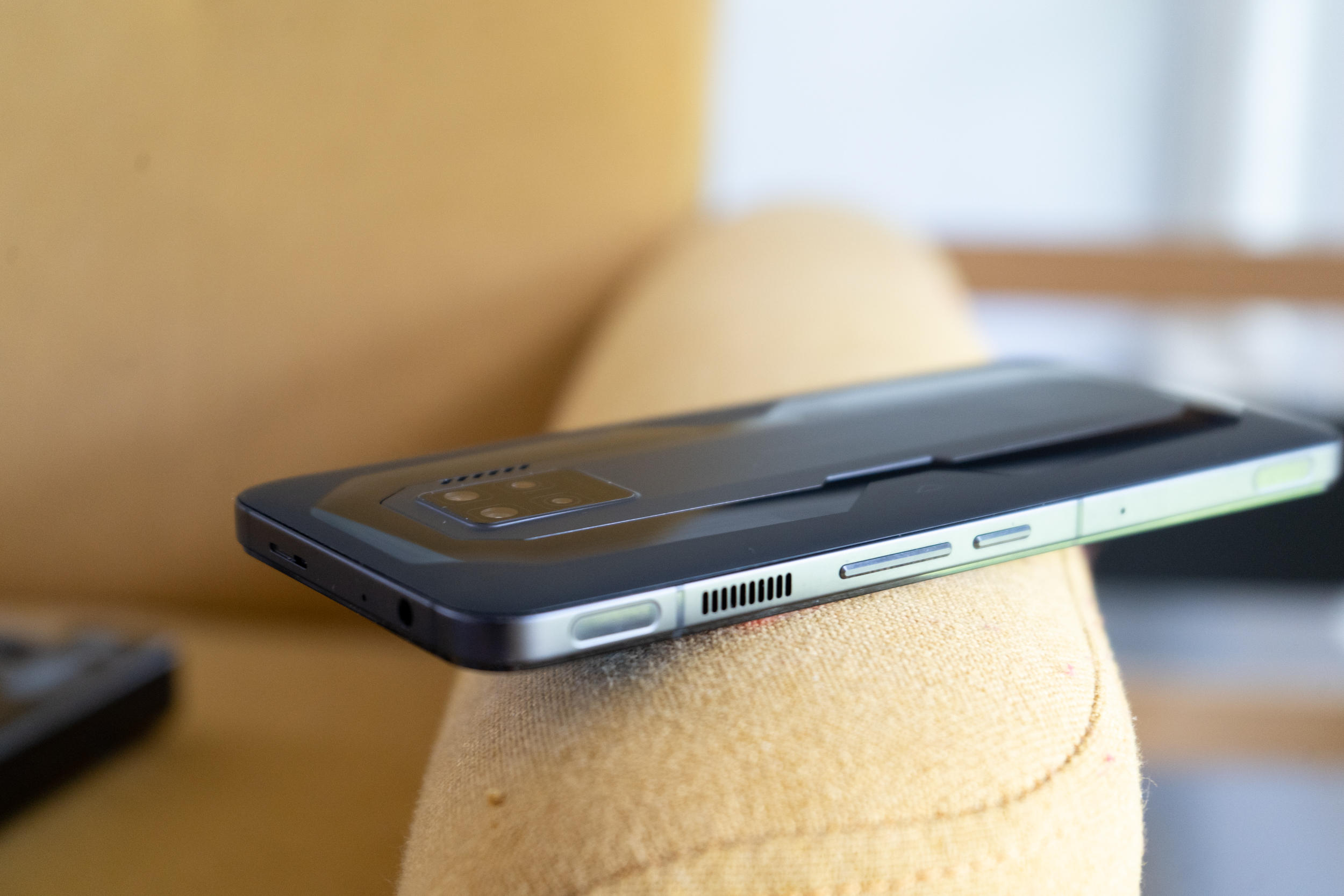 To be clear, the Redmagic 7 Pro isn’t your typical smartphone. It’s bigger and heavier than you might expect with a thick metal frame to help dissipate the internal heat and a multi-textured glass panel on the back that invokes the phone’s gaming roots. On its left edge, the device sports a dedicated switch that’s used to enable unique gaming features while it also features capacitive triggers on its right edge that can be custom-mapped to specific in-game buttons to ensure you have the fastest response time possible while gaming.

But the most important design element of the Redmagic 7 Pro is its unique cooling system that uses a 20,000 RPM fan and it coupled with a massive vapor chamber and heat-dissipation aluminum panel on the back. Working in tandem, the different cooling components allow the Qualcomm Snapdragon 8 Gen 1 chipset to deliver performance numbers that exceed anything we’ve seen on competing devices. To show off the incredible internal engineering work for the cooling system, Redmagic offers a Supernova variant of the phone with a semi-transparent glass panel on the back to highlight the LED-lit internal fan. 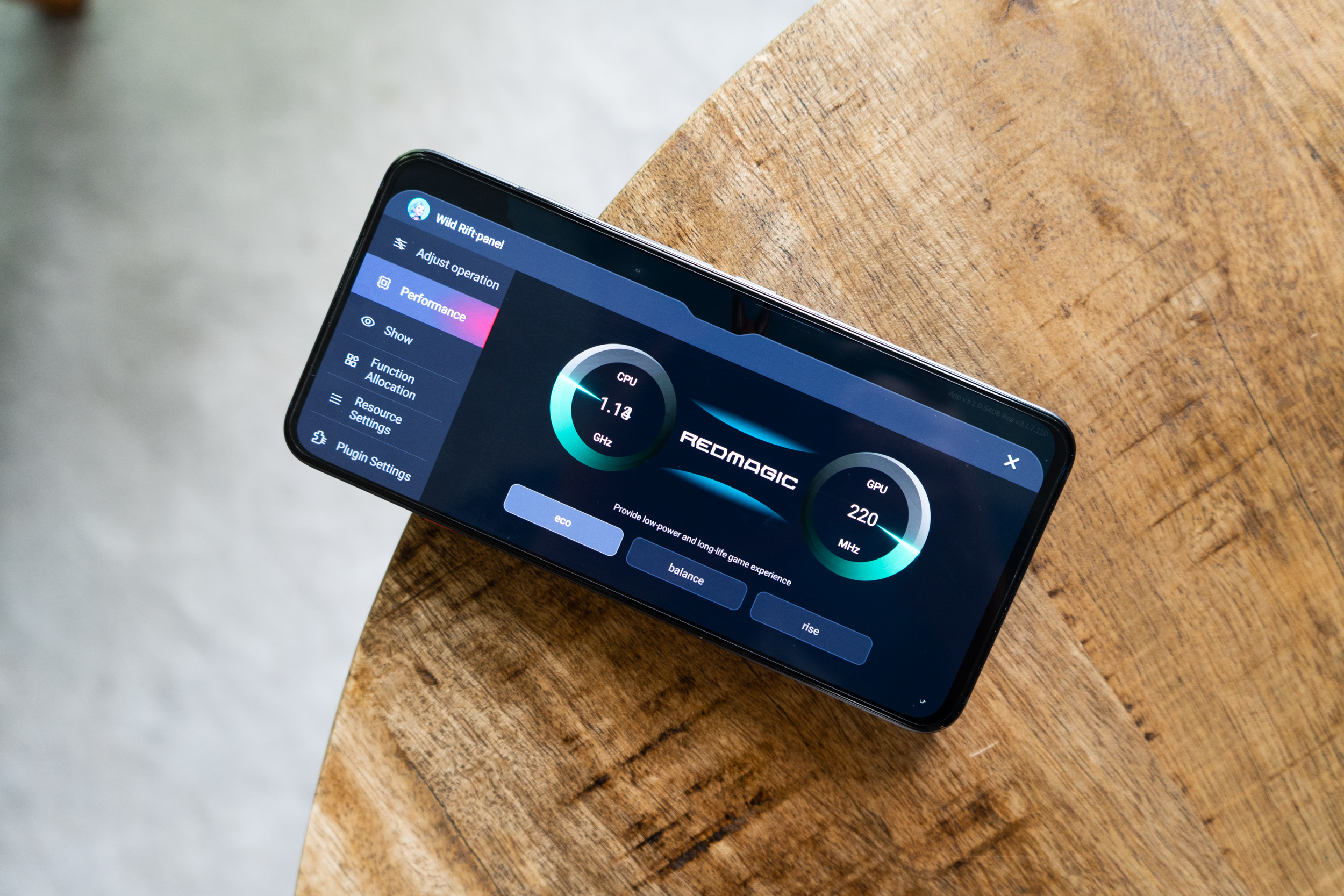 Running multiple benchmark tests, the Redmagic 7 Pro delivered incredible results on its first pass, but the endurance benchmarks are what’s truly impressive. The first round of 3DMark Wildlife delivered a score of 10,121, but the phone only throttled by 15.3% after 20 rounds, gracefully giving us a final score of 8,569. That number is significantly higher than the 6,191 we saw from the OnePlus 10 Pro which was our previous winner when running the 3DMark Wildlife stress test.

While benchmark numbers don’t always translate well in the real world, the Redmagic 7 Pro certainly doesn’t disappoint when playing some of the most taxing games on Android. To put it to the test, I loaded up Genshin Impact, the new Ni no Kuni and PUBG Mobile. Needless to say, I was able to max out the settings in each game without any performance issues. When compared to the OnePlus 10 Pro and Samsung’s Galaxy A22 Ultra, frame rates were typically the same when starting the games, but the 7 Pro’s internal cooling system is what made the biggest difference in the long run. After 5-10 minutes, frame rates on the Redmagic only dropped by 10-15% while the Samsung and OnePlus devices struggled significantly more with drops ranging from 25-40%. 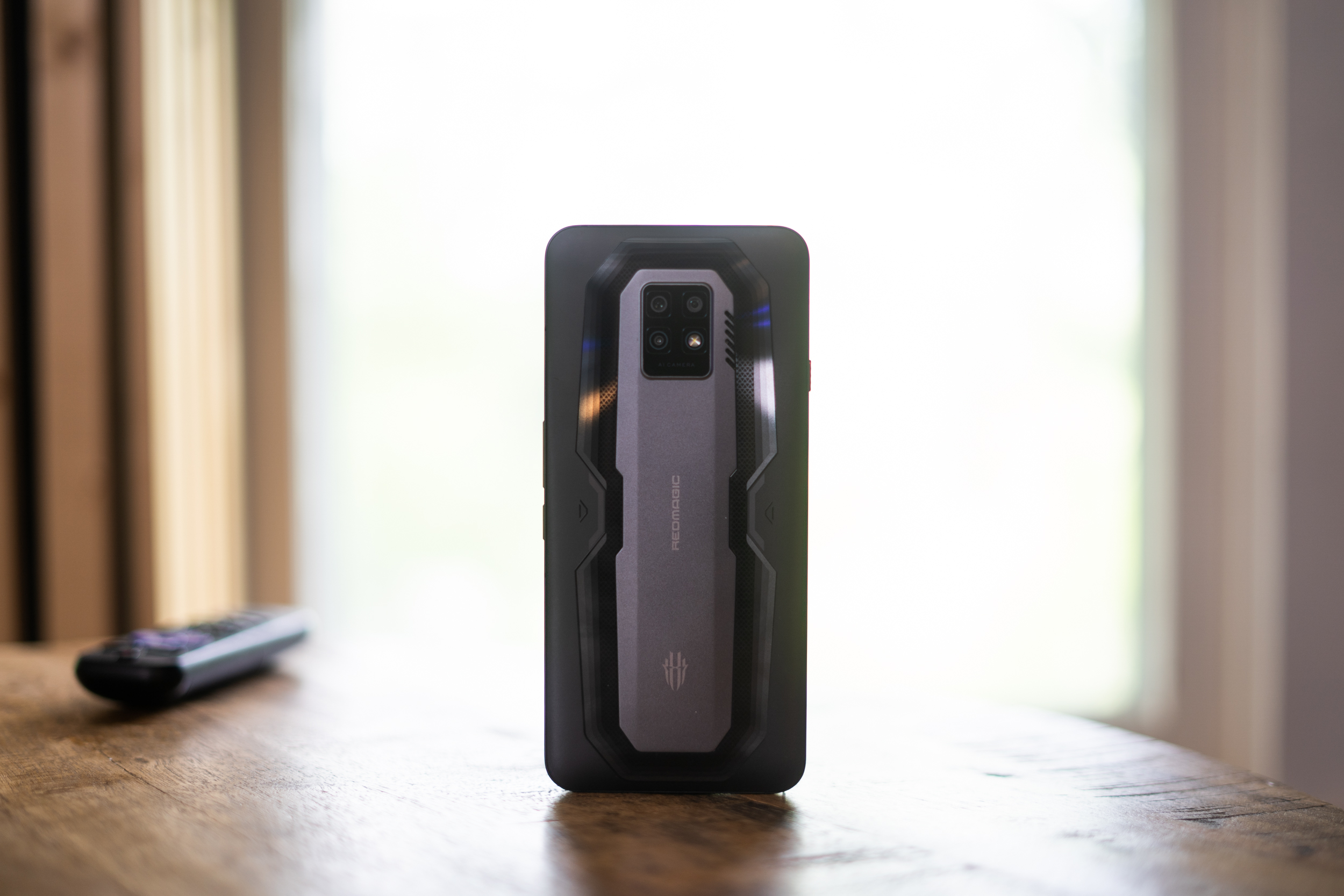 That being said, the Redmagic 7 Pro can get quite a bit hotter to the touch and can be a bit uncomfortable to hold when playing games that push the phone to its limits for 20-30 minutes.

While the overall performance numbers are impressive, the 7 Pro offers quite a few other enhancements to ensure the phone delivers the best gaming experience possible. The 6.8-inch AMOLED panel may only sport a FHD+ resolution, it’s it also has a 120Hz refresh rate and 960Hz multi-finger touch sampling. The device also comes with 256GB or 512GB storage options to ensure you can install as many games as you want and has 16GB of RAM for optimal multi-tasking performance.

It also comes with a Red Core 1 dedicated gaming chip which offloads the processing needed for audio, RGB lighting, and haptic feedback so that the Snapdragong 8 Gen 1 can be used as efficiently as possible while gaming. 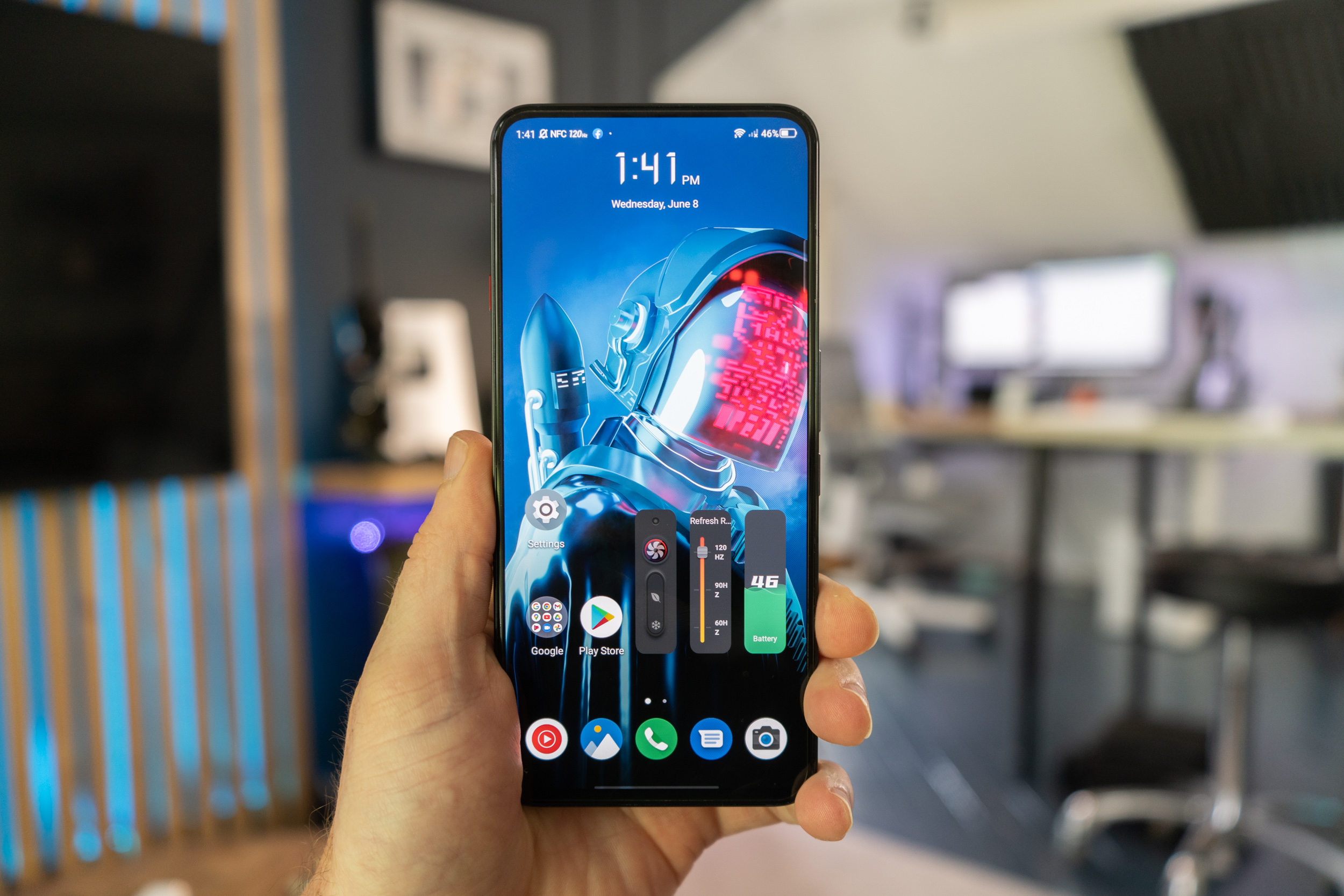 As for the software, the phone runs on Android 12 with a pretty minimal skin that carries over the gamer vibe to the user interface as well. Redmagic has also done a pretty good job with its unique homescreen widgets that show the battery percentage, give you control of the cooling system fan and the display’s refresh rate as well. As mentioned before, there’s a dedicated gaming mode that you can turn on with the Gaming Slider on the side of the phone. This will enable a dedicated gaming launcher screen with quick access to the installed games on the phone. 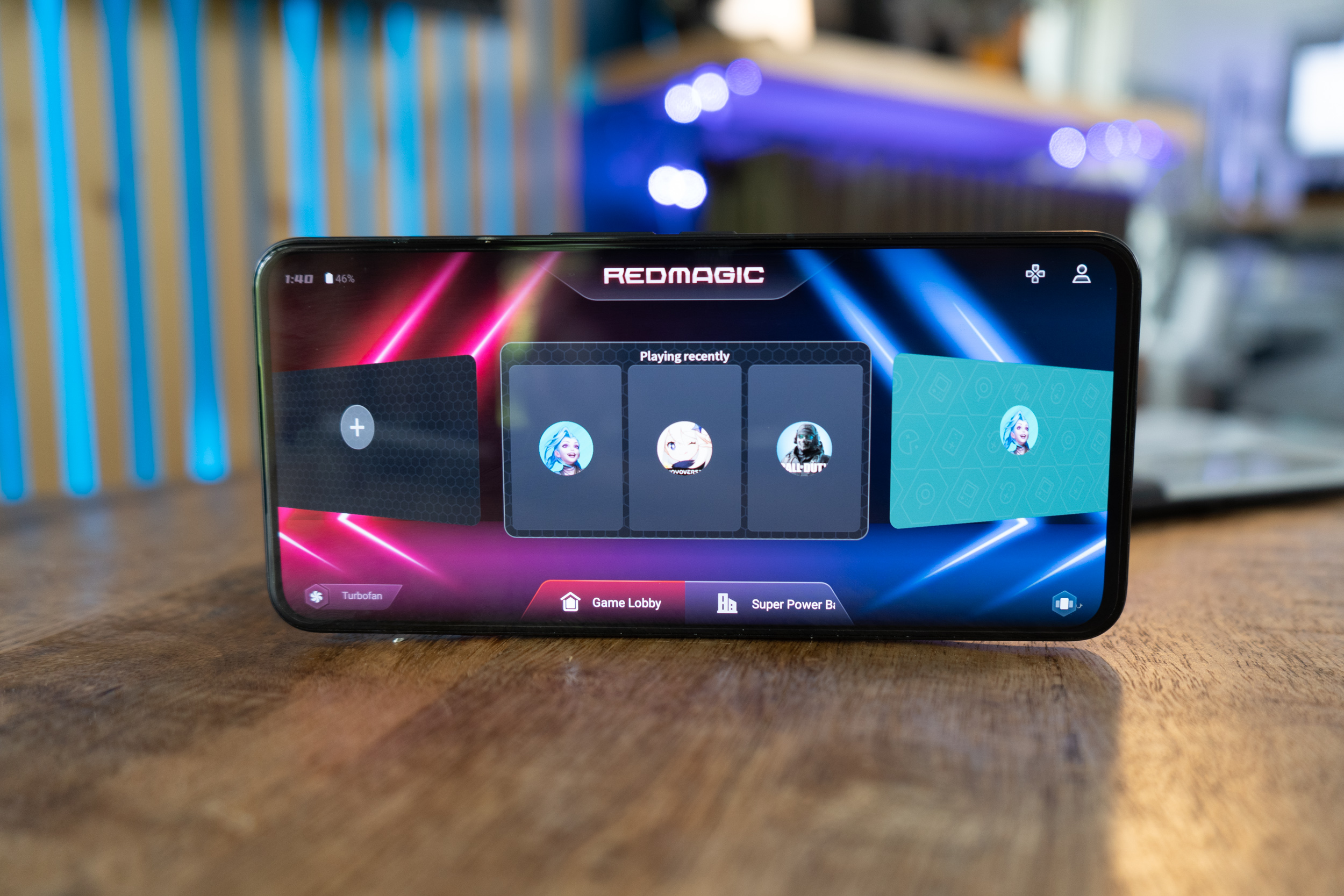 And then there’s the Game Assist overlay that you can access by swiping in from the edge of a phone’s screen when a game is being played. Here you can tweak the performance settings of the phone, map the shoulder buttons specifically for the game you’re playing, adjust the display’s refresh rate, touch sampling rate, contrast and color tuning and even set accidental touch areas for where your palm might rest o the display. The only thing that’s really missing is an option to stream your gaming sessions, but you can record them. 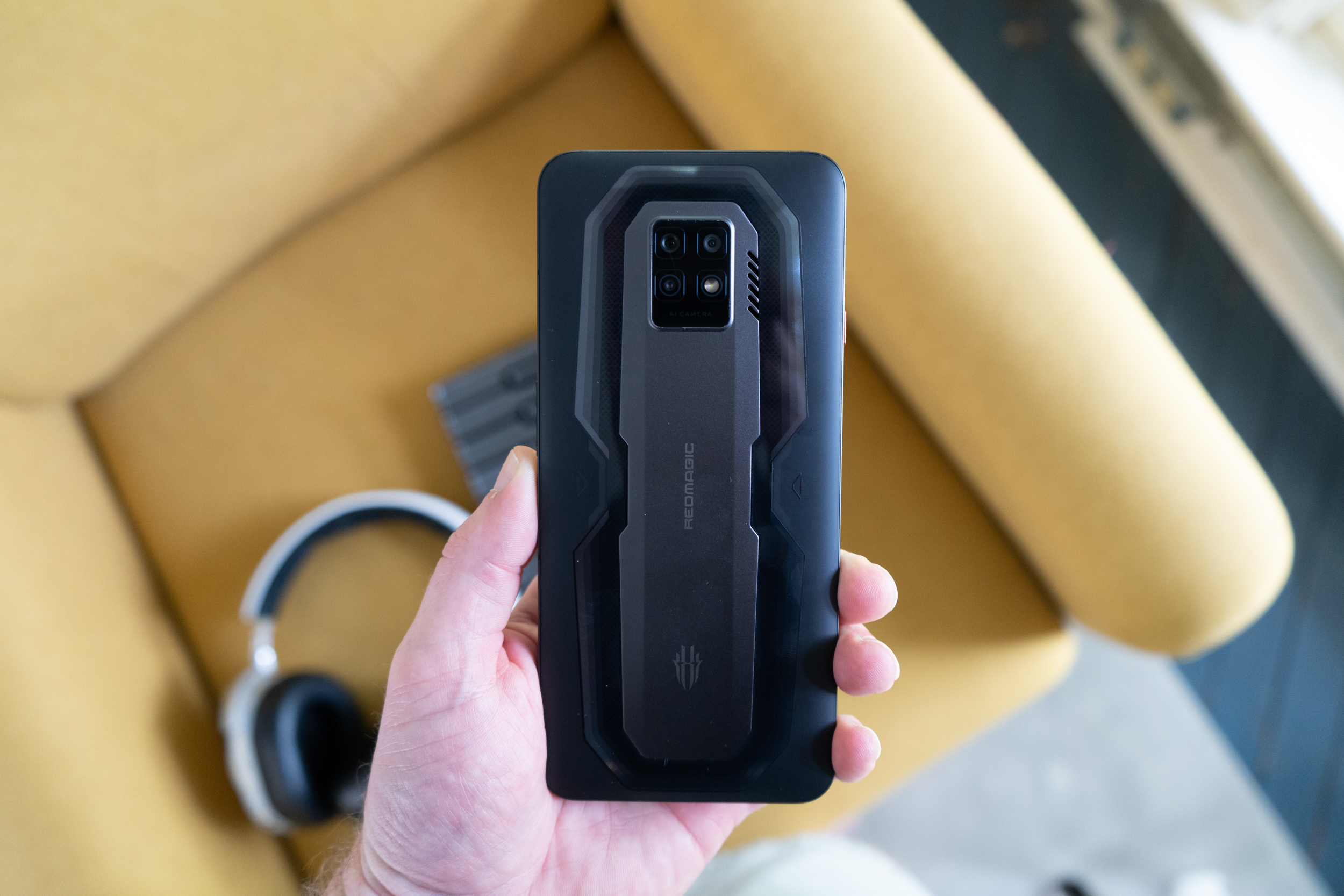 Battery life on the Redmagic 7 Pro can vary greatly, based on how you use the device. As my daily driver, the 5,000 mAh battery lasted a full day with a 25-30% charge remaining when plugging the phone in at night. But if you’re planning on sitting down for some intense gaming sessions, the Redmagic 7 Pro will chew through the battery at about 20% per hour. Fortunately, the phone comes with a 65W charger I the box, that’s capable of delivering a full charge in under an hour.

There’s no denying that the Redmagic 7 Pro isn’t your average smartphone. Its performance is unmatching within the Android space, but it’s not a smartphone I’d use for everyday use unless I was a 14 and spent most of my day gaming. If you’re looking for optimal gaming performance in a mobile device, it definitely won’t disappoint and it’s certainly a lot cheaper than the $1300 it so you’d have to shell out to buy the best smartphones other brands are offering.