Let’s face it, the microphones built into our smartphones don’t sound that great. They’re fine if you happen to be in a quiet room or if you’re on a call, because usually thanks to software, it helps clean up the sound to make you sound clearer. It’s an entirely different story if you’re trying to record yourself speaking into the camera.

This is made worse if you’re outdoors in a noisy environment, like if you’re walking down the street, or if you’re in a cafe or restaurant, or if you’re at the gym. This means that recording audio in these types of locations is pretty terrible when we look at an internal vs external cell phone microphone.

So if you’re looking to take your smartphone videos to the next level with a phone external cell phone microphone, SYNCO is here to help with the SYNCO P1 microphone which is being offered in two variants, one of which is for Android and the other being an iPhone external microphone, but fundamentally and at their core, they are pretty much the same. 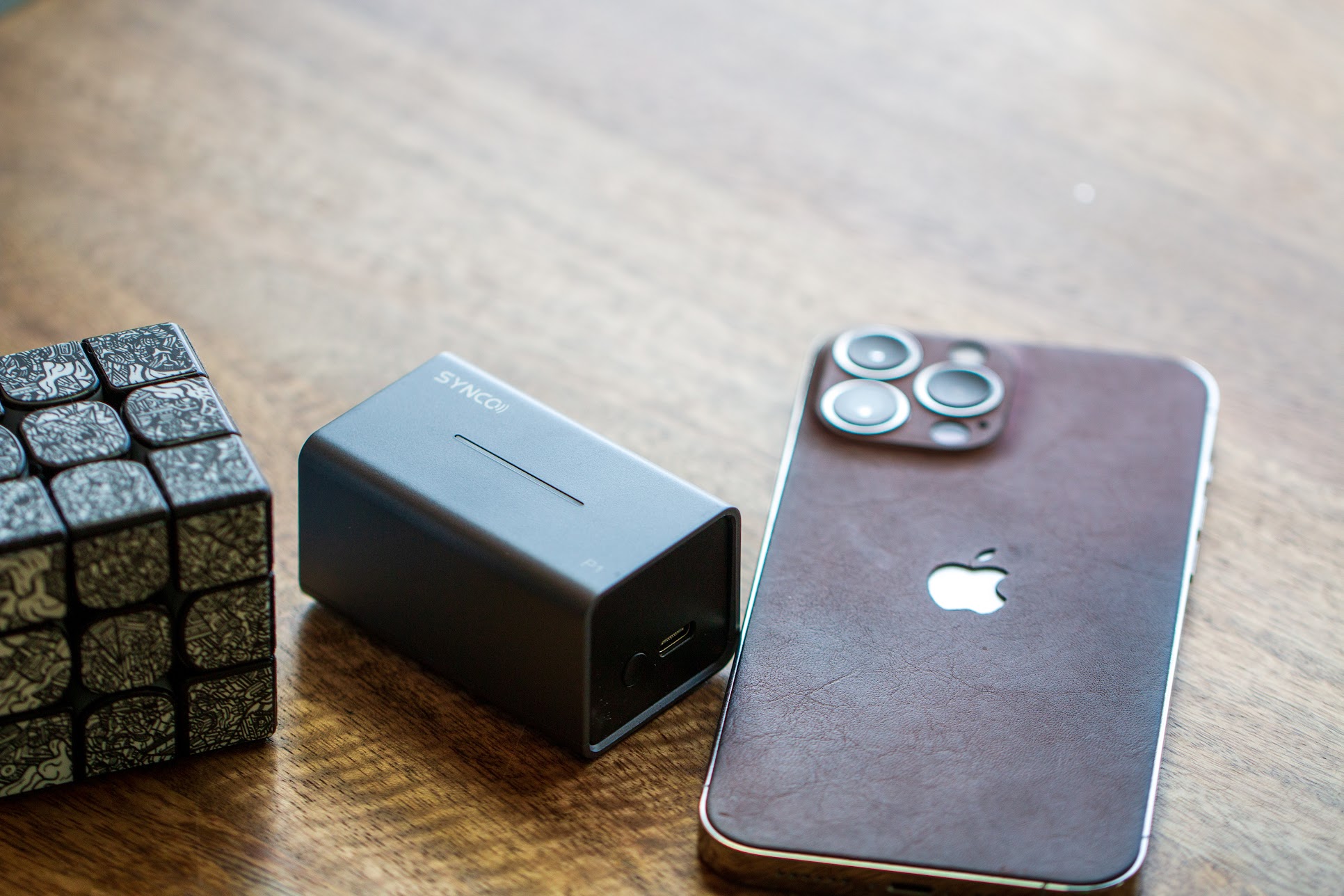 The most important thing about a microphone would obviously be its quality.

SYNCO has opted to use MEMs technology for the microphone of the P1. This plays a part in allowing the microphone to remain small but effective, unlike the more traditional microphones you would see at concerts or events that are of the Electret Condenser Microphones variety.

The microphone offers a frequency response of 20Hz-20KHz, a sampling rate of 48KHz, a bit depth of 16Bit, and -26dB in sensitivity, along with ﹥75dB for its signal-to-noise ratio.

SYNCO has also equipped the P1 with the Syncoder Encrypted Transmission Algorithm 3.0 and an intelligent DSP chip. This allows the microphone to be smart enough to maintain the strongest signal strength possible with a range of up to 50m between obstacles, like a wall, or if it has a clear line of sight, it can even go as far as 150m.

One feature missing that we would have liked to see would be the addition of a windscreen which can help improve the recording quality when outdoors where it could be windy. Some recording samples we’ve heard demonstrate that perfectly where a windscreen could have most definitely helped.

There are many ways to mic up a smartphone using an external cell phone microphone. One of the options is to attach a microphone to your phone itself, but the problem with such setups is that depending on how far away your subject is, you might get mixed results, especially if your focus is on the person’s voice.

With the SYNCO P1, the company has created a small wireless budget external microphone that can be easily clipped onto clothing. This means that if the point of your recording is to capture the person’s voice, whether you’re recording a vlog or an interview, having the microphone as close to the subject as possible will ensure the best possible quality. 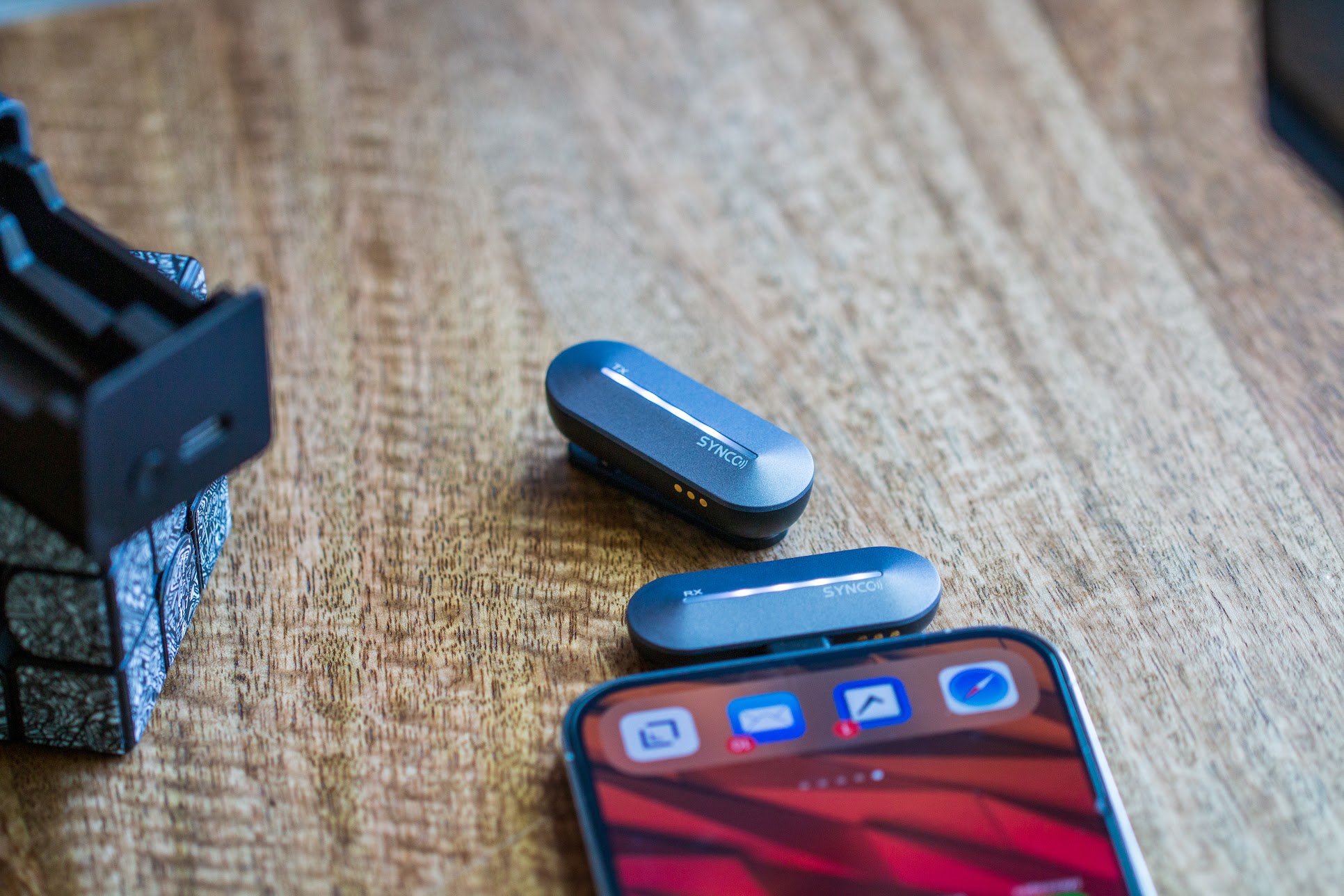 This is because being closer allows it to pick up the person’s voice first and foremost, as opposed to shotgun microphones which depending on the model and quality, might end up picking more background noise than you want.

According to SYNCO, the P1 measures a mere 49x19x19mm and weighs just 10g, so not only does it not get in the way, but it isn’t heavy enough for you or your subject to feel when it’s attached to their shirt’s collar or the lapel of a jacket. There is even a tiny light strip on the transmitter that indicates that the microphone is working, and can also be used to indicate battery life.

Keep in mind that while the P1 is small, there are actually much smaller and more traditional-looking lavalier microphones out there if size is an absolute priority.

Taking cues from wireless earbuds like Apple’s AirPods, the P1 can automatically and quickly pair the microphone and transmitter together in a single tap, thanks to the company’s ActiveSense contact pairing technology. 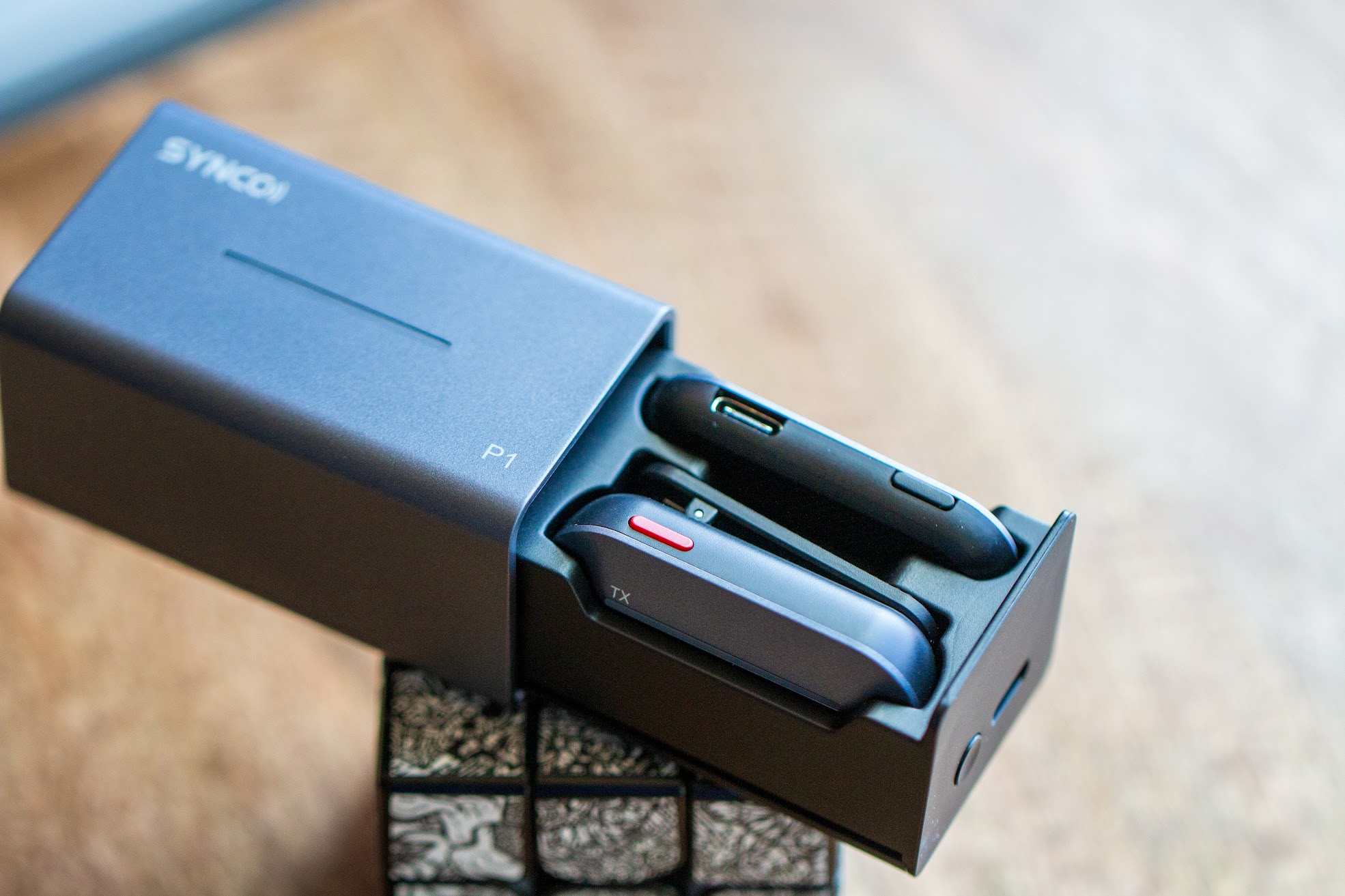 If there is one thing we have to applaud SYNCO for with the design of the P1, is that the company has taken cues from true wireless earbuds. We’re talking about a carrying case for the microphone itself and the transmitter. This carrying case not only stores the microphone and transmitter, but it acts as a charger at the same time.

SYNCO claims that the P1 offers up to 5 hours of recording on a single charge, and the carrying case provides two additional charges, meaning that you can squeeze as much as 15 hours of use in total. If you happen to be recording all day, say you were on holiday, you should be able to get almost a full day’s use out of it.

Something to keep in mind is that based on some reviews we’ve seen, the way the charging case works, there’s a chance it could pop open if it’s placed in your bag which might be annoying. 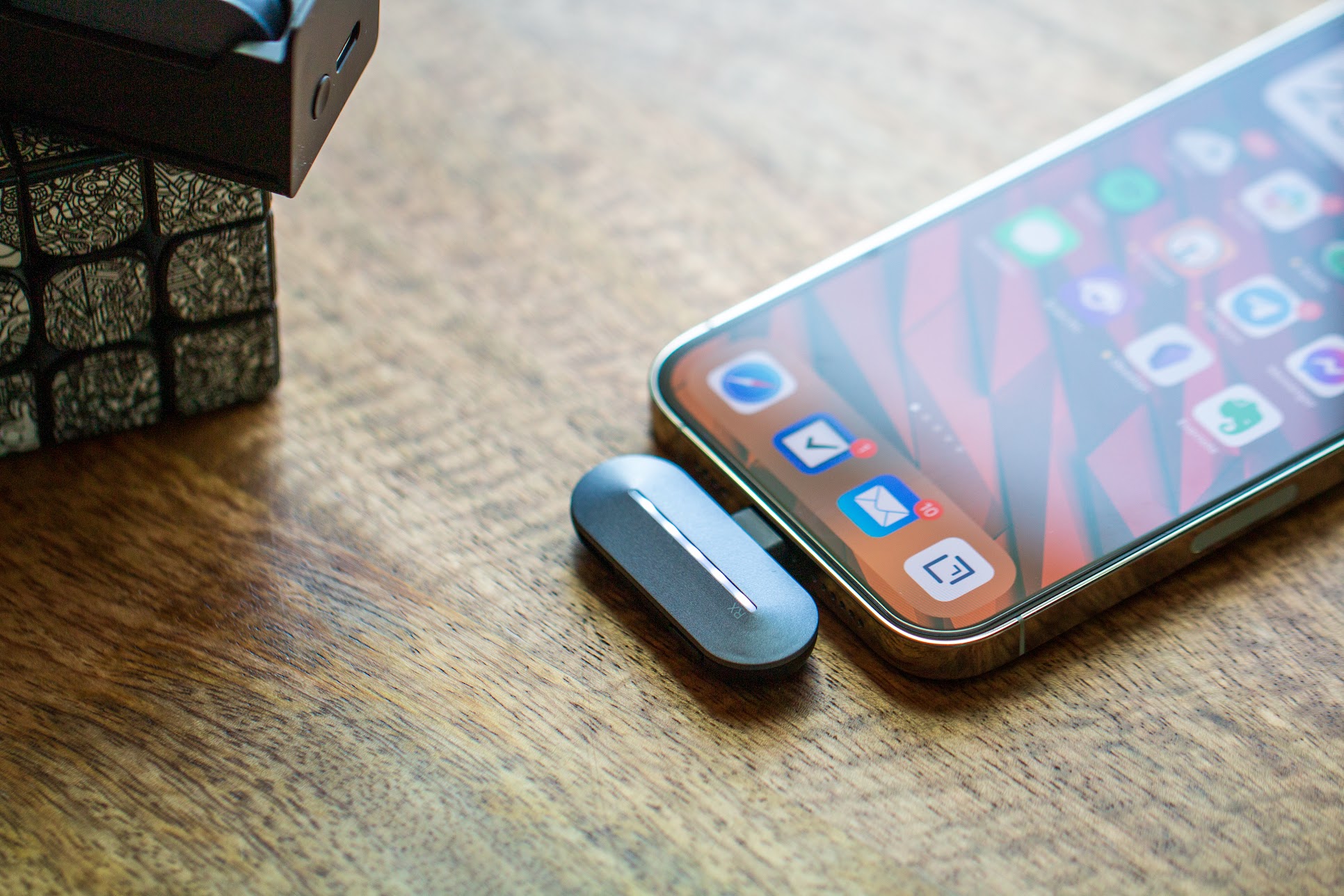 If you’re keen on getting your hands on the SYNCO P1, it will be available in two options – the P1L which is for iPhone users, and the P1T, the external microphone for Android phone.

It is also surprisingly affordable compared to competing brands at $89, making it one of the best external microphone for iPhone video recording if you’re on a budget, so if you want to improve your smartphone audio recordings, the SYNCO P1 is most definitely worth checking out. 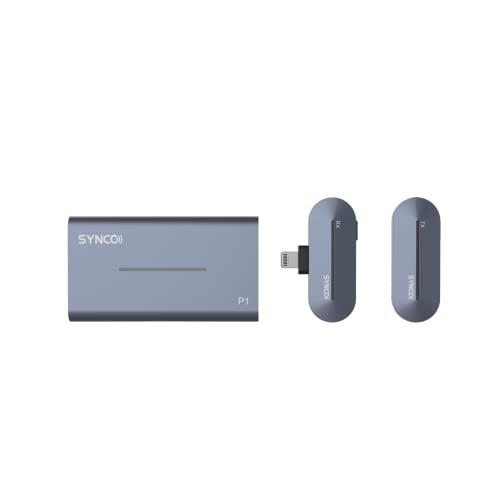 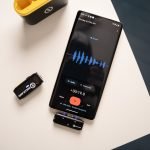 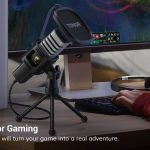 Level up your streams and podcasts with the T 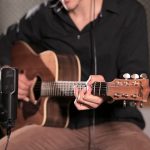 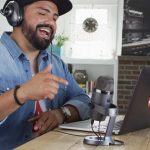