It’s a big day for OnePlus, as the company has officially launched its latest flagship, the OnePlus 10 Pro, in China. Additionally, there’s a new color variant of the OnePlus Buds Pro landing in India, and a major firmware update is arriving for current owners of the Buds Pro.

As is usually the case, this update is rolling out in stages, coming to a limited number of users first, before rolling out to the masses. Once the update arrives, you’ll be able to download and install it by opening the HeyMelody app on your phone, making sure your Buds Pro are connected (with the case open), and scrolling down to the Firmware update section. Then, just follow the on-screen instructions to install the update to your OnePlus Buds Pro.

After version 531.531.410 is installed on your Buds Pro, your earbuds will restart. After they are reconnected, you’ll see a new “Dual connection” section within the HeyMelody app. The feature is not turned on by default, so you’ll need to tap the toggle next to Dual connection and wait for the Buds Pro to restart.

From there, you’ll need to pair your earbuds with another device going through the traditional method of pressing the pairing button inside the case. Once paired, both connected devices will appear within the Dual connection section. This makes it easy for you to switch between the two different devices without needing to go through the pairing and re-pairing process every time. The only other requirement is that when it comes to smartphones, you’ll need to download and install the HeyMelody app on the devices that you plan on using the Buds Pro with. 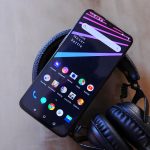