For many, Google Messages is the go-to text messaging app on Android, especially with the integration with RCS and all of the fun that comes with that. But have you ever received a text that you meant to reply to, but forgot too for one reason or another? An APK Teardown by XDA Developers has revealed that the Messages app could “nudge” you to if there’s an unread text messages.

This comes via the latest beta release for the Google Messages app, and the feature would be aptly-named “Nudges”. The way that this would work is pretty much what you would expect. In the code, the description says it will display “messages you might have forgotten to respond to.” Plus, the messages that would be giving you a nudge would be moved to the top of the Messages app automatically.

Technically, this is already possible with the Google Messages app. However, the method requires you to manually set up reminders for the different messages and threads that arrive. With Nudges, this is an automatic reminder based on the threads in your app, which is likely to be a bit more useful since you won’t have to remember to set a reminder to be reminded of a message you missed.

Currently, “Nudges” is not yet available even if you have downloaded the latest beta version of Messages. However, with all of the codebase in place, it’s only a matter of time before Google flips the switch and makes this available for at least those on the beta channel.

If you want to be one of the first users to test out new features coming to Google Messages, you can hit the button below to sign up. In the meantime, let us know what your favorite messaging app is, and if it’s not Google’s option, what do you use instead?

How to automatically delete OTPs in Google Me 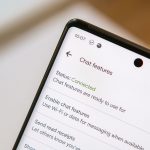 Google shares all of the new features coming to Messages