We know that the majority of Phandroid readers stick to Android, but there are those of us who dual-wield an Android phone and an iPhone. So when Google rolls out a new feature to iPhone users, it tends to be pretty important. One such feature is the arrival of Picture-in-Picture with YouTube on the iPhone.

The feature was announced back in June, with Google providing the following statement:

Picture-in-Picture (PiP) allows users to watch YouTube videos in a small mini player while simultaneously browsing outside of the YouTube app on their mobile device. We’re starting to roll out PiP for YouTube Premium members on iOS and plan to launch PiP for all US iOS users as well.

For years, iOS users have had to try and find workarounds, such as using the app in Safari in order to active PiP. However, that’s no longer the case as YouTube Premium subscribers can now enjoy PiP, at least for the time being. YouTube states that this feature is still in testing, which is why it hasn’t rolled out to more users, along with not being available in any capacity on the iPad just yet. 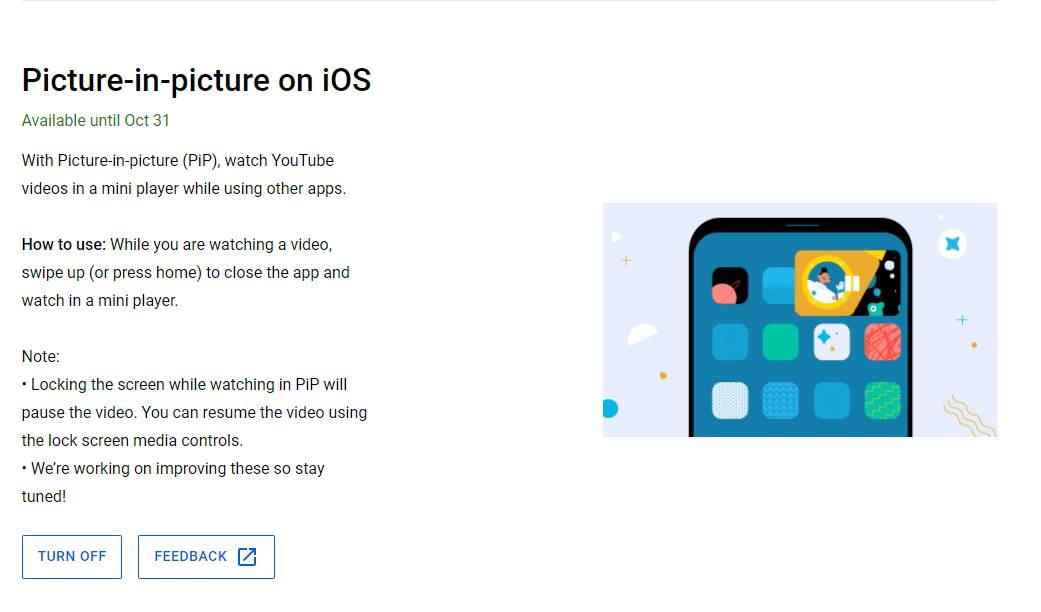 But if you are a current YouTube Premium subscriber, have an iPhone, and want to start using PiP, here’s how you can do so:

That’s it! Whatever YouTube video you selected should appear as a floating window on your Home Screen. After it’s been activated, you can pinch to resize the video, along with dragging it around to place it in different areas on your Home Screen. And when tapping on the video, you’ll find the traditional video controls that you normally find, including an “X” in the top left corner to close out the video, and another button to open the video back in the YouTube app.

There is one potentially frustrating omission at this point, and that’s the inability for the video to continue playing if you lock your iPhone. But the company does state that it’s “working on improving” the experience, so we can expect to see this rectified in the future.

Finally, if you are unable to get PiP working properly with the YouTube app, then we would recommend deleting the YouTube app and re-installing it. Activating PiP didn’t work for us on the first go-’round, but it did after the YouTube app was re-installed and I logged back into my YouTube account.