It’s been almost seven months since Google introduced the all-new Chromecast with Google TV. While the little streaming dongle has been great for some, with its included remote and updated interface, there was one surprising omission. For one reason or another, those who wanted to use this as a way to play Stadia games have been out of luck.

There have been some workarounds, but none of these are reliable, so you’re stuck either using your old Chromecast or just not playing at all. According to 9to5Google, an APK teardown of a recent Stadia app update reveals several strings of code referencing Google TV.

The lines of code read as such:

For Google TVs, use the remote to access the Google Assistant”

Although Google has not officially confirmed when Stadia support would be coming to the new Chromecast, this is a pretty good indication that it’s coming soon.

In addition to this reveal about Stadia support for the new Chromecast, 9to5Google also discovered information regarding bonuses for referrals. Google is preparing to launch a new referral program based on a “three-tiered system”. The original bonus will remain, which provided one month of Stadia Pro for free when inviting a friend. However, there are two new tiers that could be on the way, one of which is for 50% off a Stadia controller from the Google Store, with the other providing an “exclusive avatar” for your account.

Despite the recent reports about Google closing down its in-house game development studio, we’re hoping that Google isn’t going to give up entirely on Stadia. The platform offers the ability to play some of the best AAA games from wherever you are, provided that you have a solid internet connection.

How to pair your PlayStation controller with

How to pair Xbox Controller with Google Stadi 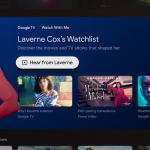