In a market where new options are arriving on a nearly daily basis, it can be tough for a new contender to emerge. Enter the Urbanears Luma, which is sleek, sport a matte finish, and may surprise you on multiple fronts.

These headphones were announced back in May, and we’ve had some time to put them through its paces. Our findings may surprise some, but it’s important to temper expectations as these won’t compete against the big-hitters on the market. 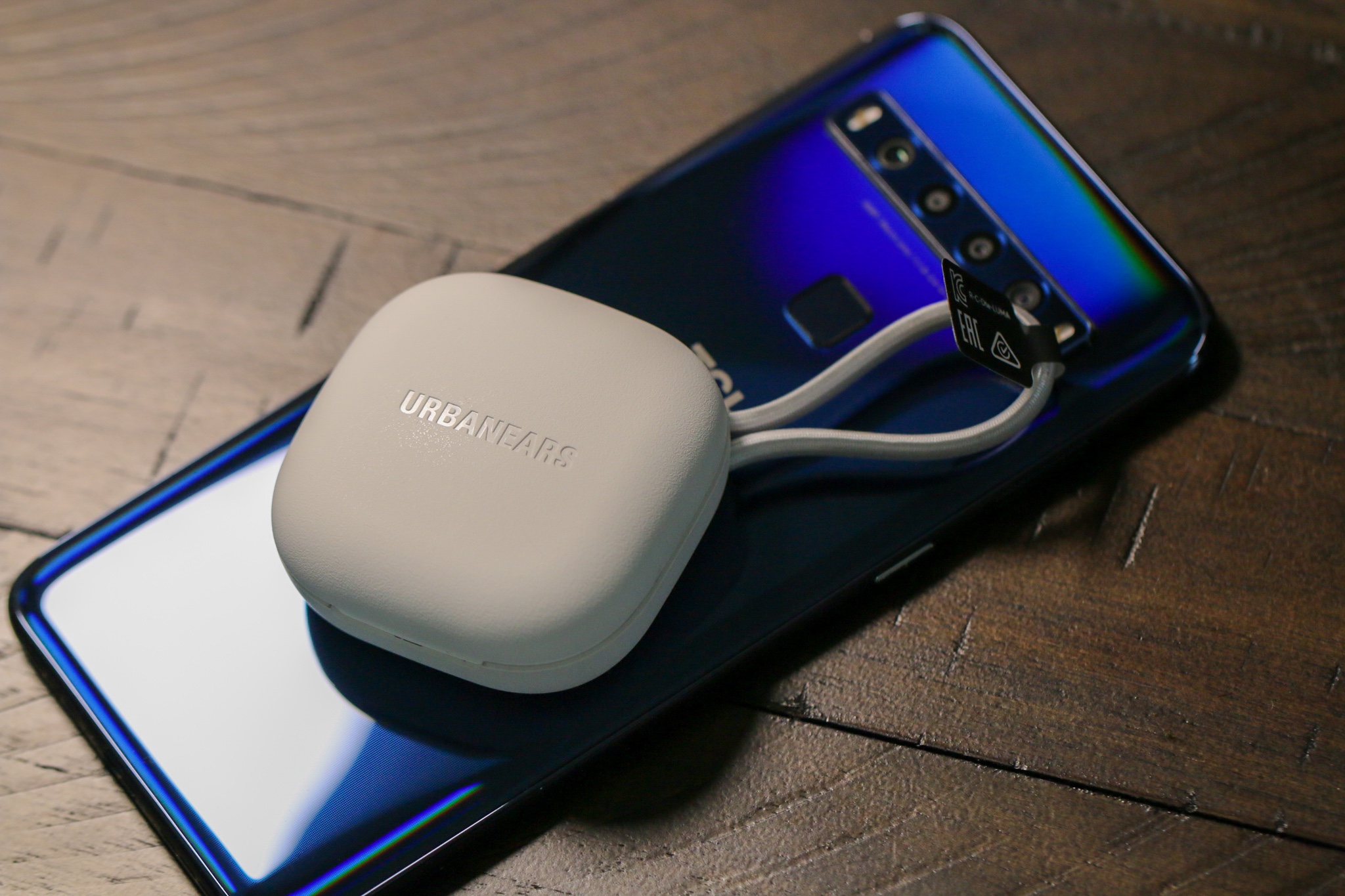 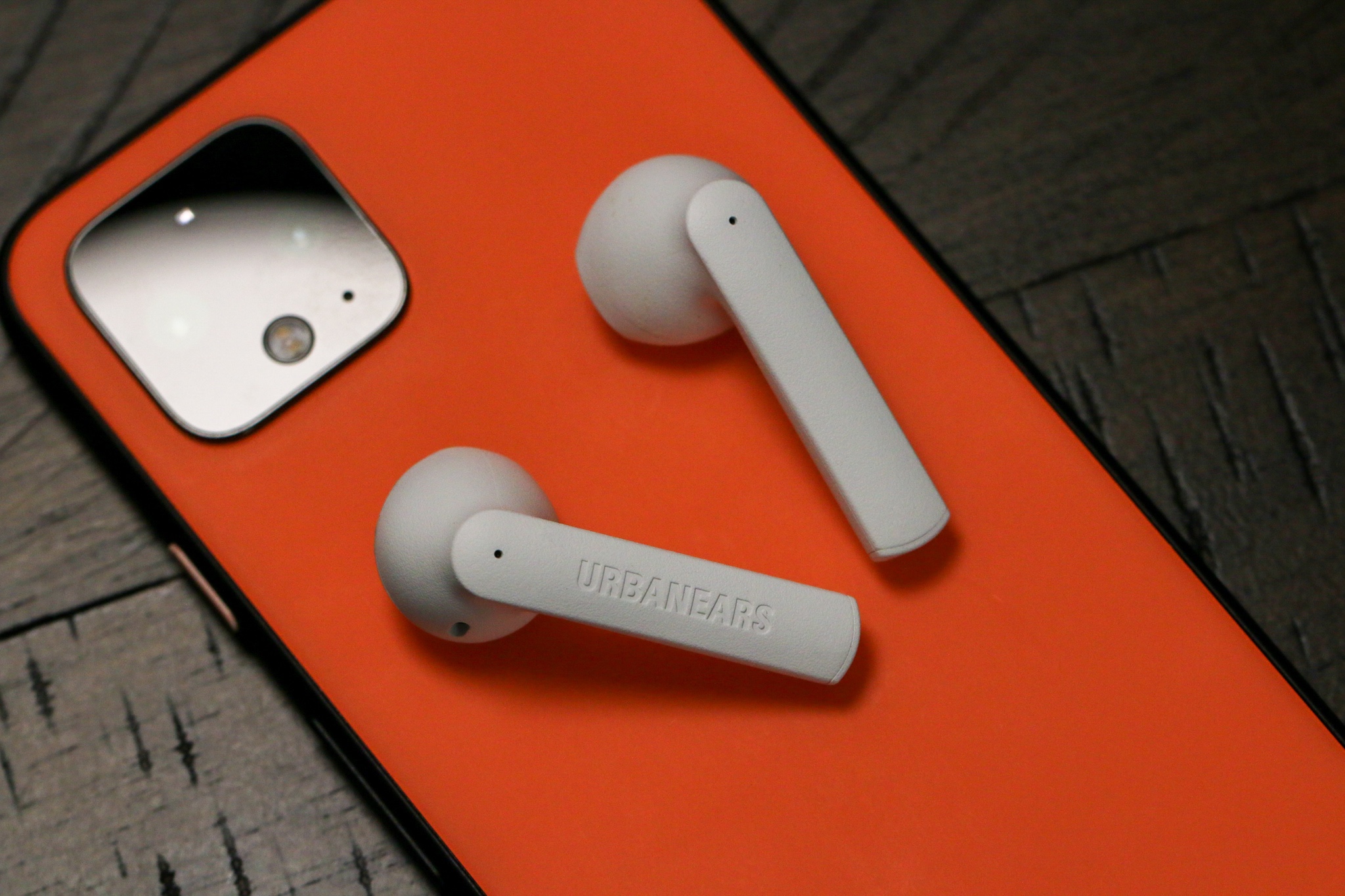 We weren’t lucky enough to get that gorgeous Teal Green color for the Luma. Instead, we reviewed the Dusty White version, which looks really, really sleek alongside the Oh So Orange Pixel 4. The case and headphones both sport the same matte finish, which is soft to the touch.

The matte finish is a refreshing inclusion, considering how many headphones are launched that are nothing but fingerprint magnets. Speaking of magnets, that brings us to the charging case, as the inside of the Luma earbuds sports the charging pins that match up with the receiver pins on the inside of the case.

Back to the case for a moment, there is an embossed Urbanears logo across the top, along with a surprising addition of a built-in handle. The same branding can be found on both of the earbuds. Urbanears knows that these small headphone cases can easily be forgotten or lost, and this handle aims to combat that. Finally, there’s a USB-C charging port on the back, for some quick-charging when you need it. 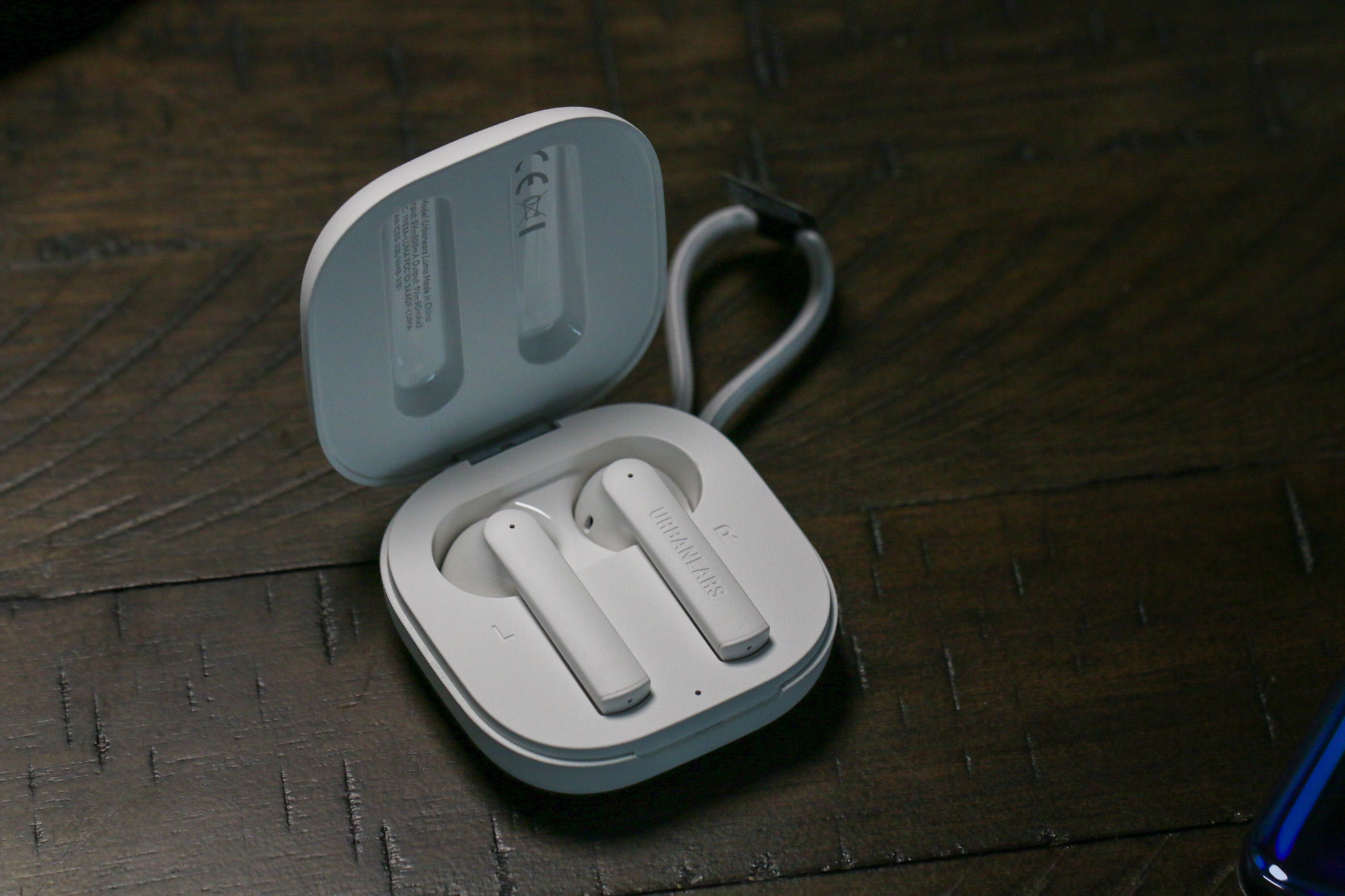 Urbanears advertises the Luma as having battery life up to 25 hours, including the case, with up to 5 hours of playtime per charge. The first time pairing these up was a mistake, as we used the Pixel 4 running the Android 11 Beta, which is going to cause some weirdness.

After unboxing the Luma, charging them up to 100% via the charging case, and pairing them up, we were ready to go. Even with times of just having the music on pause, or pulling one of the headphones out of my ear, the first go-round was pretty solid. Finishing out around 4 hours of listening time. Not the advertised 5-hours, but close enough.

There was one odd moment where the Luma played a noise to indicate the battery was getting low. Sure enough, checking the Bluetooth battery indicator showed that there was 30% left. Then 10 minutes later, the Luma had shut off completely.

The second go-round for a full listening session was a bit different, as the Luma was paired up to the OnePlus 7T. This device is not running any beta software, so our hope was that we would get some better results. Here’s what we found:

This is far from the five hours of listening time that is promised, so we aren’t sure if something is up with the headphones or what. 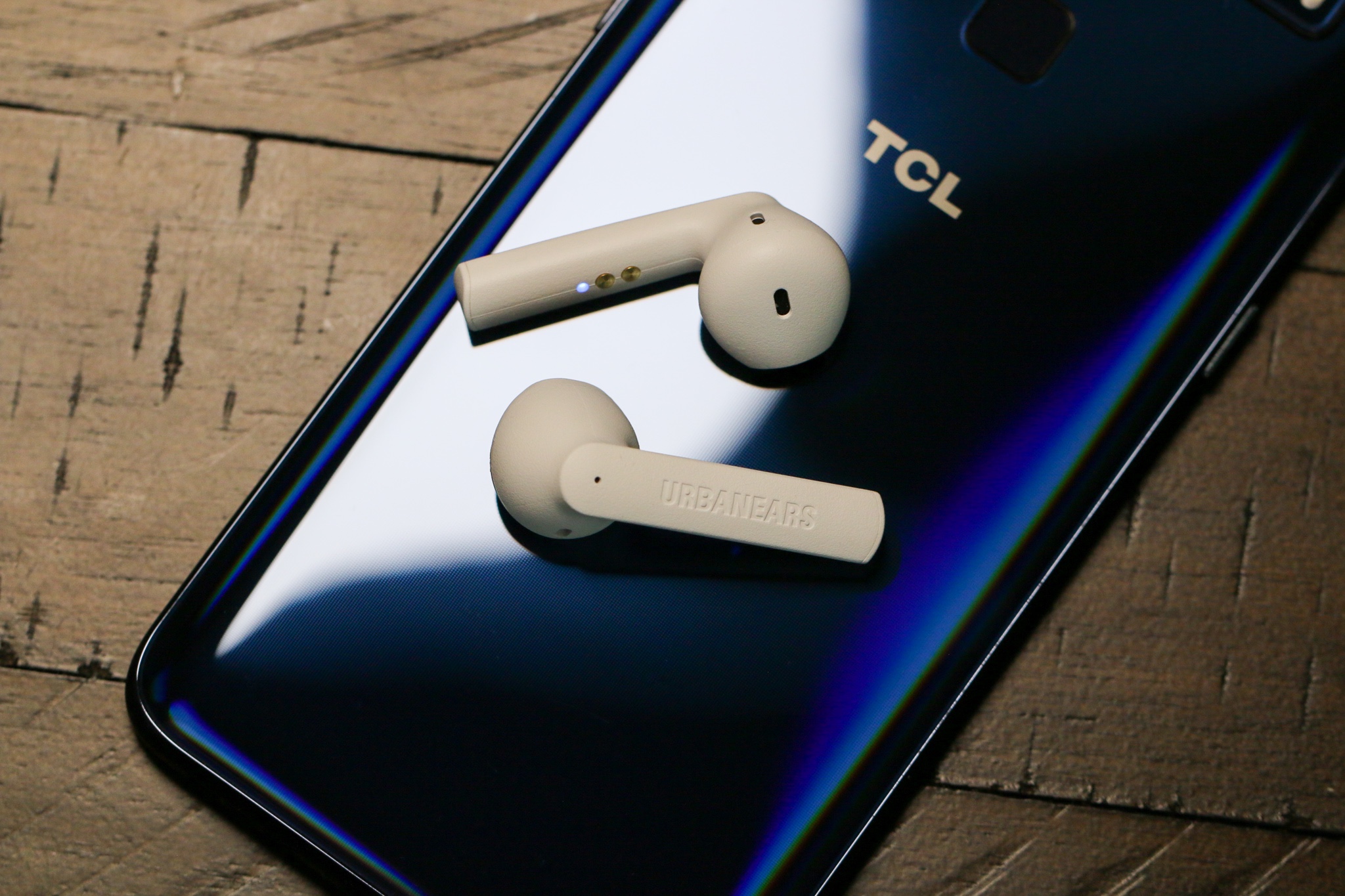 As I stated in my Pixel Buds review, I’m by no means an audiophile. I have less-than-optimal hearing, but love using and having new headphones to play around with. When it comes to the Luma, these just sit in your ears, don’t have any additional tips to fiddle around with, and leave enough space for you to hear your surroundings.

That gives you a pretty standard set of EQ levels, that cannot be customized because there is no accompanying app. Sure, you could try a third-party option, or something built into your music app of choice, but things may sound a bit off.

One thing to take note of is that if you start noticing that the sound quality has changed, make sure that the Luma earbuds are seated properly. Walking around and doing chores around the house may end up moving them around and “unseating” them from your ear lobe. 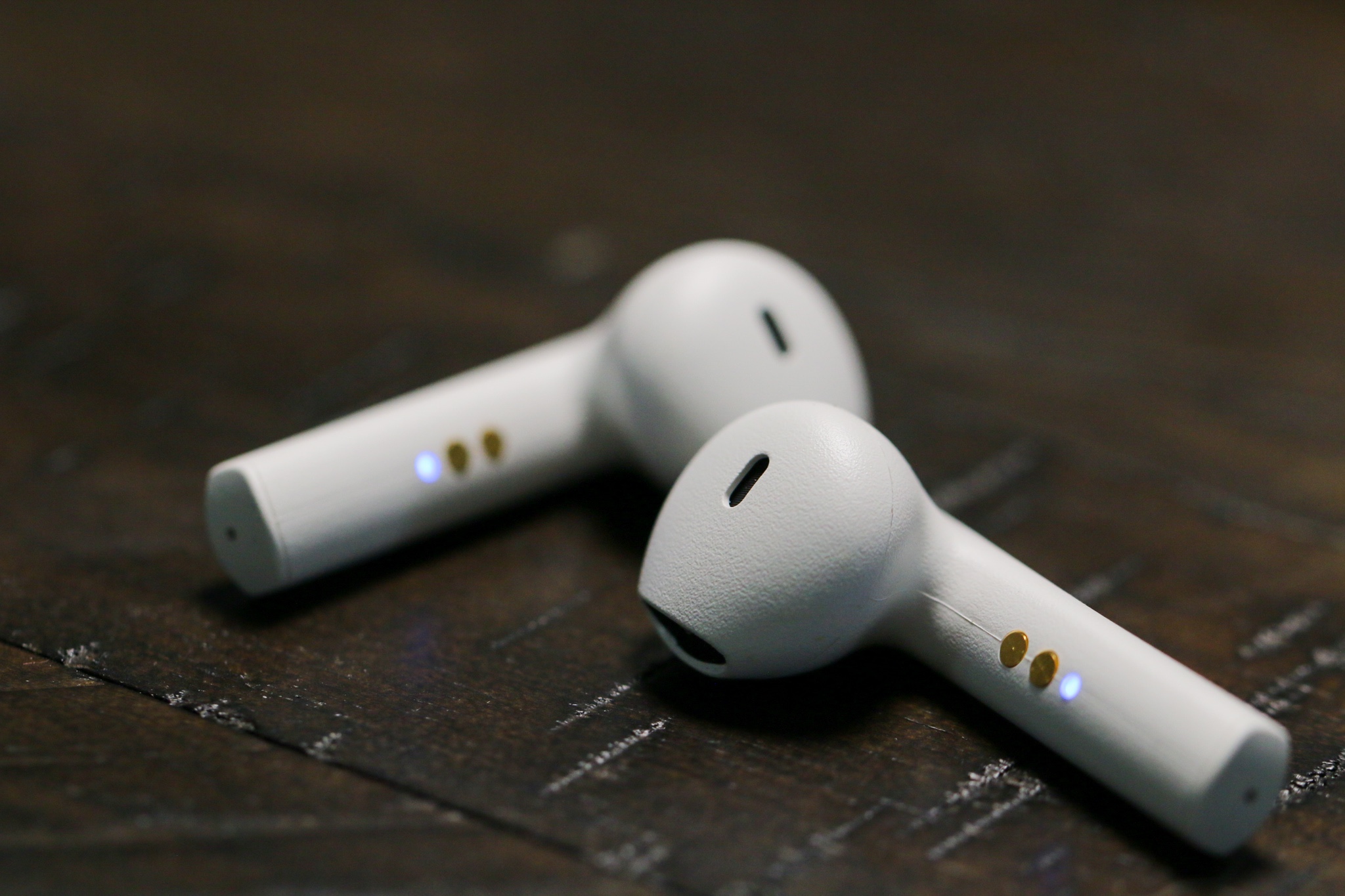 The real value of the Urbanears Luma comes in with the various features packed into a set of headphones priced at less than $100. More and more headphones are starting to feature the wear-detection sensors and its extremely useful, especially if someone starts to talk to you and you need the music to pause.

“Gestures” is a loose phrase here, and we often found the Luma not responding to touch or swipes. In a pinch, you expect the headphones to work as advertised, so when these didn’t, it was frustrating.

Phone calls were surprisingly good, with the call quality on both ends being solid, even as someone with a beard that covers up the microphones. In fact, they performed better for calls than other headphones that are priced much higher.

USB-C and wireless charging are nice perks that should not be overlooked, even though more and more headphone cases are including this. But when the $180 Jabra Elite 75t requires an additional purchase just to get wireless charging, the Luma takes the cake here. 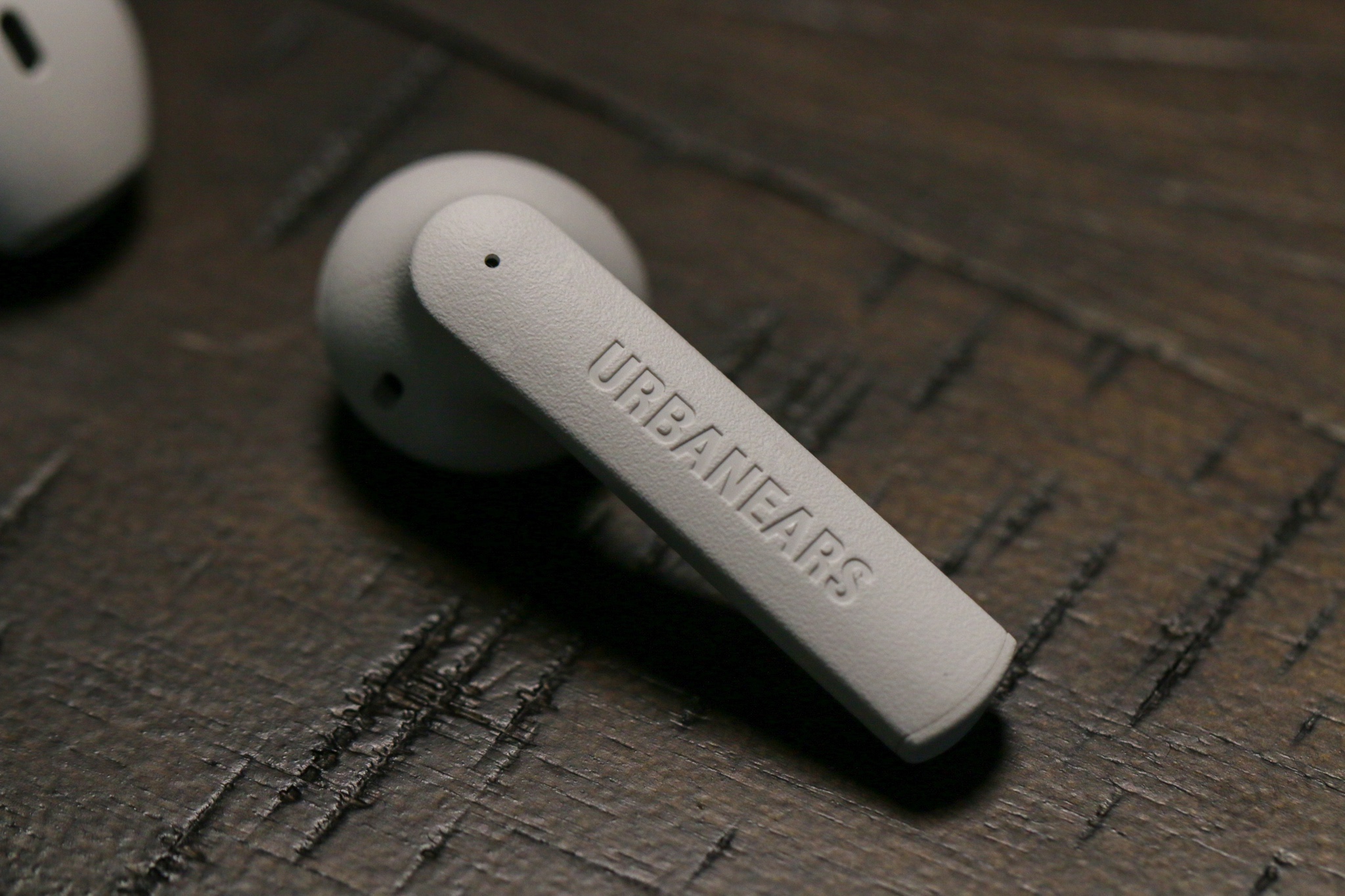 Without sugar-coating anything, the Luma is an impressive set of headphones priced at just $99. This gives you up to 25 hours of advertised battery life, along with wired or wireless charging, and features that you won’t find in headphones priced much more.

All-in-all, the Urbanears Luma is a solid set of headphones, with more features than headphones that are available at twice the price. Out of all of the headphones that I’ve tried in recent years, these come the closest to mimicking the original AirPods that started this trend of truly-wireless headphones. If you have the chance, pick these up for yourself, but definitely try and get that Teal Green color option.

For less than $100 you get a solid and sleek set of truly wireless earbuds that have more features than you’d expect.