A smartphone’s life can be measured by many things, but in the case of foldable phones, there is one more thing that needs to be taken into consideration: its display. This is because due to the nature of foldable phones and the stress that it puts on the display, it makes sense that this might be one of the first areas to give.

Now, as some of you know, Motorola recently dipped their toes into the foldable phone waters with the launch of the Motorola Razr. According to Motorola, the phone is said to sport a newly-designed hinge that is supposed to make it more durable, but is it?

According to a recent test conducted by CNET, that does not appear to be the case.

In the video above (the test starts around the 15 minute mark), the folks over at CNET decided to put the Razr through its paces by making it fold and unfold multiple times until it failed. As it turns out, based on their test, the Razr managed to withstand 27,000 folds before it “broke”. While the phone remained functional, basically at this point, the phone was no longer able to fold back correctly.

Now to be fair, we doubt that many of us would fold and unfold a phone with the same frequency and intensity as the machine did, but we should note that in CNET’s previous test with the Samsung Galaxy Fold, the handset managed 120,000 folds before failure, meaning that the Razr is very, very far behind the competition in terms of overall durability.

Does this mean that you should avoid the Motorola Razr? Hardly, but if you do buy it, you might want to keep it in mind that maybe the phone might not necessarily last you quite as long as a more traditional smartphone. 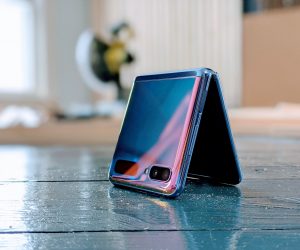