These days when it comes to displays on our smartphones, there seems to be less emphasis placed on the resolution. This is because at a certain point, our eyes probably can’t tell the difference between 4K and QHD, so really, what’s the point, other than another marketing talking point.

Instead, manufacturers are starting to focus more on refresh rates, where we’re seeing more phones move up from the 60Hz default refresh rate. In fact, there was a rumor from back in August suggesting that one of the upgrades the Google Pixel 4 could come with is a 90Hz display. It turns out that those rumors were right.

According to the folks at XDA, they have found a comment within the Android 10 source code that suggests that the rumors of the 90Hz display could be real. The code, according to XDA, is to enable/disable a flag within Android 10 that will toggle the 90Hz display. It also makes reference to a “P19” device, which they speculate is most likely in reference to the 2019 Pixel phones.

Now, 90Hz is a modest upgrade over the 60Hz display found on most phones these days. It puts it on par with other handsets like the OnePlus 7 Pro which also comes with a 90Hz display, although it probably won’t look as smooth as phones like Razer Phone 2 or the ASUS ROG Phone II, both of which offer screens with 120Hz refresh rates.

Take it with a grain of salt for now, but hopefully we’ll hear something official from Google soon.

How to install Nest Thermostat 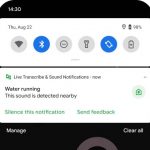