Receiving spam or robocalls can be very annoying and disruptive to one’s day, but unfortunately, this is the reality of the world that we live in. The good news is that if you are a new AT&T customer, it seems that the carrier will be looking out for you because they have announced that they will now block all robocalls by default.

This is the carrier taking advantage of a recent FCC ruling in which they have allowed carriers to block robocalls by default. What this means is that prior to this, carriers would allow robocalls to go through, and if customers wanted to block them, they’d have to signup for anti-robocall services (although this was later made free).

By blocking robocalls by default, it means that customers will not have to worry about dealing it with themselves, because in theory, the system should help filter out most robocalls. We expect that there could be times when a robocall or two might slip through, but then again, no system is perfect.

As for existing AT&T customers, this does not mean that the carrier will not be giving you anti-robocalling protection. They can either wait where the feature will eventually be enabled for them in the coming months, or alternatively, they can enable it right now for themselves through the AT&T Call Protect app or through their myAT&T account settings.

No word on when the other carriers will start enabling the feature for their customers, but they probably won’t be too far behind.

AT&T’s in hot waters as customers 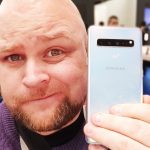 Samsung Galaxy S10 5G will be coming to AT