After years of waiting, Samsung showed off its foldable smartphone at its developer conference today with its new Infinity Flex Display. The device in question was shown off inside a dummy case, allowing its two displays to be shows off without revealing the actual design of the phone. Samsung’s foldable smartphone will work as a regular smartphone with a “cover display” on the front of the device. Unfolding the phone reveals the 7.3-inch foldable display on the inside of the device which appears to offer a 4:3 form factor.

While Samsung has been producing flexible displays for quite some time, building a smartphone with a foldable display required a lot of innovation around how to protect the panel and deliver something that is durable to stand up to day-to-day use. Samsung had to create a new protective layer that’s flexible and tough with a new adhesive which allows the Infinity Flex Display to be flex hundreds of thousands of times without losing its bond. The display itself is actually the thinnest Samsung has ever made. It includes a polarizer layer that’s 40% thinner than before. 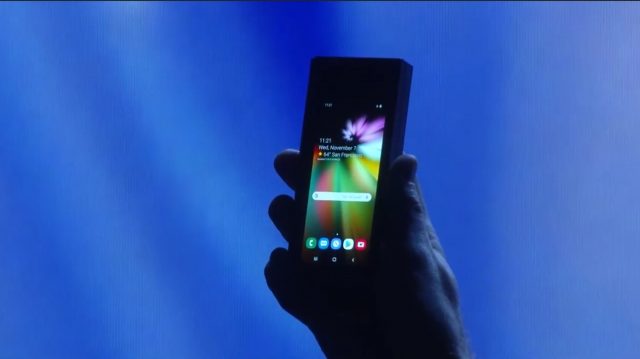 Samsung foldable smartphone will also have a few new software tricks that take advantage of its two displays. App continuity will allow apps to migrate seamlessly between the cover and foldable displays when the phone is unfolded and a new Multi-Active Window feature will allow users to use three apps side-by-side.

Rather than developing these new features within Android on its own, Samsung is partnering with Google to do so. Glen Murphy, head of Android UX at Google, was invited on stage to announce that Android is officially building in support for foldable smartphones with App Continuity and Multi-Active Window being integrated into the operating system.

As we all expected, Samsung didn’t reveal the name its foldable smartphone, its key specs or when it will be released, but it did say that mass production of its new Infinity Flex Display will commence in the coming month. If Samsung is able to keep things on track, we could see the first Infinity Flex Display foldable smartphone hit the market right alongside the Samsung Galaxy S10 in Q1 of 2019.

You can watch Samsung showing off its foldable smartphone at its developer conference in the video below. Just skip to the last 20 minutes. 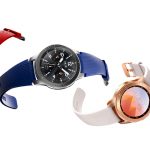 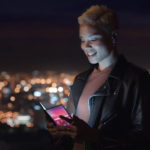 Samsung teases the launch of its foldable-dis

Samsung’s foldable smartphone could pack a