The Huawei Watch 2 was recently unveiled at MWC 2017, and by many accounts, the wearable is a step backward. The original Huawei watch was largely seen as the best Android Wear smartwatch once it was released in 2015, a title that carried itself through 2016.

However, one reason for the recent let down of the Huawei Watch’s successor may be tied to the fact that Huawei’s CEO doesn’t see a future for wearables. At the Huawei Global Analyst Summit 2017, Huawei’s rotating CEO, Eric Xu stated the following:

“I’m not a man who wears watches, and I’ve never been optimistic about this market. In fact, I’ve never figured out why we need to wear smartwatches when everything we need is on our phones.”

This is an interesting, and refreshing, take on the smartwatch market which has notably been on the decline recently. More manufacturers are focusing on fitness products, or baking features such as standalone GPS and heart rate monitors into their wearables.

None of this is to say that Huawei will be definitely looking to exit the wearable market which is already dominated by the likes of Apple, Samsung, and Fitbit. However, Xu raises a good point as wearing a smartwatch is definitely a bit redundant as all you’ll need to do to fetch that notification is reach into your pocket.

As a general fan of wearables, I can see the counter-argument, but it’s not one that really holds much water. Wearables are just an extension of our smartphones, and do make it easy to check notifications at a glance to decide whether we should do something with them, or just keep moving along.

It will be interesting to see how this plays out for Huawei going forward, especially if the Huawei Watch 2 flops. Let us know what you think and whether you would rather see a fully geared out smartwatch, stick with a regular fitness tracker, or go back to a “traditional” watch. 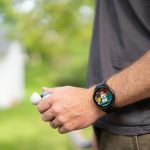