Say it ain’t so: Pokémon Go usage is reportedly on the decline

It was almost inevitable, but after 2 months since it officially launched — where it quickly became the most download game in various app stores — interest in Pokemon Go could finally be waning. This is according to a report from Axiom Capital Management who compiled data from multiple app tracking sources like Sensor Tower, SurveyMonkey, and Apptopia, and found the same story: Pokemon Go’s daily active users, downloads, engagement, and time spent in the app per day are all on the decline. 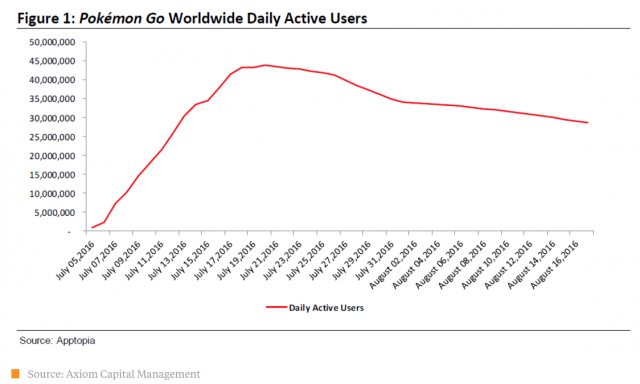 While it’s easy to blame Pokemon Go’s bugs and constant battle with cheaters that’s sending gamers packing, it’s possible this could have more to do with the fact that summer is finally dwindling down and kids are finally heading back to school. Of course, it’s also not outside the realm of possibility to assume that some of the more dedicated players have already hit a wall, finding themselves in a place where they’ve mostly “caught them all.”

It’s many of these hardcore players who have shifted their focus to not not just completing their Pokedex, but catching the very best by using 3rd party software to uncover hidden stats the game itself doesn’t make public accessible. It’s this kind of software Niantic, the game’s developer, says is a violation of their terms of service, causing developers to shut down their apps, or users to stop using them cold turkey in fear of losing their accounts — and all the long hours they’ve invested into them — to a sudden ban.

If nothing else, it seems Niantic may have underestimated the game’s popularity from the get-go and by overlooking constant usage from players, didn’t plan for the game to be “beaten” in such a short amount of time. Of course, numbers like these aren’t going to spell doom for the company. Simply drop a new generation of Pokemon into the game and watch as all those hardcore players — and their wallets — come crawling back. With a seemingly endless supply of Pokemon to pull from, there certainly wont be a shortage anytime soon.