SleepBot helps you “track” your sleep, promising a better morning

While preparing for a developer event that I’m organizing, I was hunting for an inspirational opening video. I remembered the one above from Google I/O in May, and while watching it again I started trying out each of the apps featured one by one.

My favorite of the lot, except the ones I had already used, is SleepBot. Right from my college days, I have had a horrible sleep pattern typically going to sleep just as the sun comes up the next morning, and waking up around lunch. Additionally, I’ve had reasons to worry that I might have a couple of sleep disorders, including sleep apnea. Or at least that’s what WebMD would have me believe.

Since SleepBot helps you “track” your sleep, in terms of movement and/or sound, I decided to give it a shot. If nothing else, the app would try to wake me up at the appropriate time based on my sleep cycles and movement. 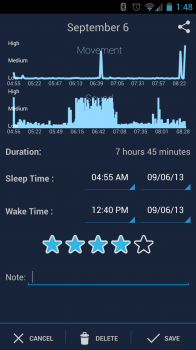 The setup itself is pretty straightforward: head into the app, set an appropriate time for an alarm, choose to activate from the three modes of SleepBot (Smart Alarm, Track Motion and Record Sound, I chose all three) and then punch in when you go to bed. One very important recommendation is to connect your charger, and keep the phone near your pillow.

As you switch off your alarm, you can “punch out”, when ends the tracking. The app asks you to rate your sleep and shows a nice summary of what it tracked. You can always edit this data later on, which turned out particularly useful as I went back to bed right after punching out, waking up several hours later.

Clicking on the graph opens up a bigger view, from where you can click on portions of the sound graph to hear what it recorded at the time. I was kind of worried because of the portion right in between, but it turned out to be coming from the fan in my room.

On the whole, my WebMD diagnosis proved to be nothing more than what you’d expect: paranoia. I’m still tracking myself just in case though, probably because I’m one of those nuts who likes to track each and everything I do (confession: I even check my Klout score once in a month or so).

Having said that, SleepBot IS good at waking you up at the right time. I found their Smart Alarm to be pretty effective, just not sufficiently lazy-proof for guys like me (for whom I’d recommend this). It also syncs your data to their server if you want to have a look on your PCs, provides quite a bit of information regarding sleep (I had never previously heard of sleep debt), and allows you to set auto-alarms as well as reminders to go to sleep.

To give SleepBot a try, use this link. 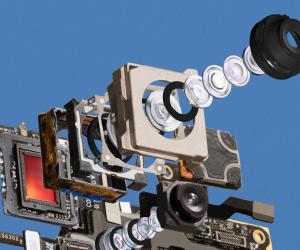 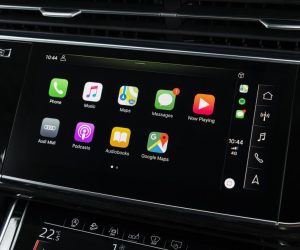