Most of MWC’s major announcements have already been had, but tucked in the Fujitsu booth we found an Android prototype that made quite the impression on us thanks to an obnoxiously sick set up specs: Quad-Core NVIDIA Tegra 3 Processor, Android 4.0 ICS, 4G LTE connectivity, 13.1MP camera, and oh yeah- it’s waterproof.

We didn’t get to test out it’s waterproof endurance, but as witnessed in our Fujitsu Arrows videos from CES, the company is making all their devices waterproof. It does indeed work well and I completely commend the waterproofing effort on behalf of clumsy consumers (like me) around the world. Take a look at these pics I snapped with the 13.1 MP camera of the “Fujitsu F12 Arc” as it’s named in the Android system settings (click to enlarge): 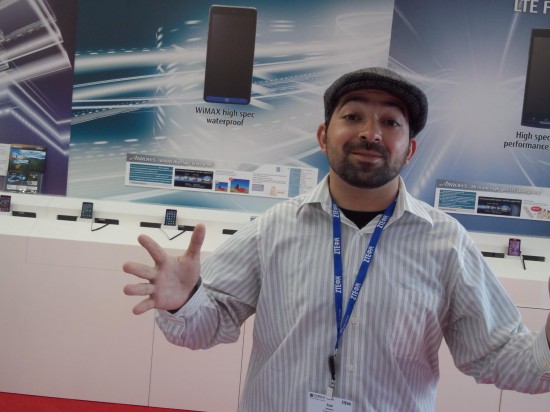 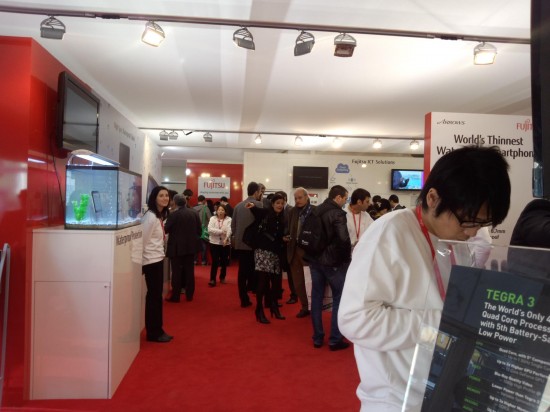 Hmmm… I wonder if that girl is smiling at me or Quentyn? Either way, the photos turned out pretty good, but appear a bit suspicious. We snapped the pictures, transferred them to Quentyn’s Galaxy Nexus via Bluetooth, and they’re only 2048px by 1536px in resolution. Doing a little Pixel to resolution math, we learn that’s the resolution of a 3.1MP and not a 13.1MP camera.

Typo? Prototype mistake? Or maybe we didn’t set up the camera for optimal photo quality? The rear of the phone clearly states it’s a 13.1MP device on the outer lens of the camera, so we’ll look into this and let you know. Check this article in a few hours and we’ll have an update.

UPDATE: Fujitsu said the prototype had not been configured to allow the 13.1MP sensor to work with Android 4.0 so was limited to 3MP output until further development. They did have other Android devices with 13.1MP cameras and the same sensors and we’ve provided a photo sample below (click to enlarge) for reference purposes: 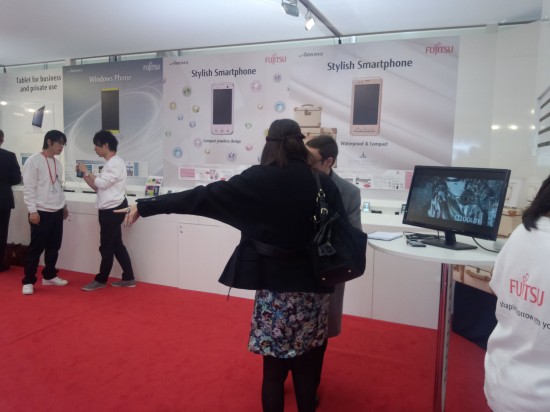 The “prototype” status was definitely affecting several features. We attempted to take video, but the display appeared to freeze and the recording played back was merely a green box. Below the camera is a fingerprint sensor, used to lock and unlock your device by reading your fingerprint so that nobody else can access your phone should you choose. Unfortunately, this is another feature that was found on the hardware yet not working on the software.

Perhaps most notable and noticeable on this Fujitsu phone was the beautiful 4.7-inch screen working in harmony with the Quad-core interior and Android 4.0 exterior. It’s a beautiful thing to see all these manufacturers embracing quad-core android 4.0 gear… now if they’d just follow Fujitsu’s lead and waterproof everything, we’d be in much better shape.