We already knew that O2 in the UK would be launching the Galaxy Nexus on November 17th, but retailers throwing their own dates into the mix sparked confusion. O2 killed that confusion over the weekend by publishing a picture of the Galaxy Nexus on G+ and then answering a launch date question with, well:

Meanwhile, Virgin Mobile (Canada) has announced to it’s customers – and everyone else’s customers craving Ice Cream Sandwich – that they’ll be able to get the Galaxy Nexus in early December. They’ve even got a signup page on their website:

Here is the quote directly from Virgin Mobile:

“Samsung’s ongoing collaboration with Google has resulted in a next generation smartphone that has both superior functionality and a stunning user-experience,” said Paul Brannen, Vice President, Mobile Communications at Samsung Electronics Canada. “The large, responsive HD SuperAMOLED screen offers users full 720p video playback on the device, and accommodates the new Android 4.0 user interface that is based on soft keys.”

UPDATE: Bell didn’t want to miss out on the action and has offered their promise and sign-up page too. 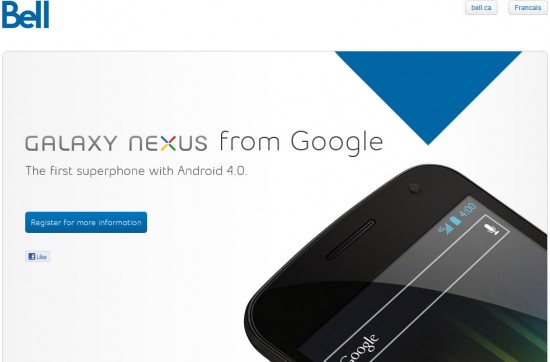 Don’t you wish American carriers were as forthcoming? Looking back on the Nexus One disaster that promised the device would be “Coming Soon” to Verizon but saw it get lost in the wilderness and left to perish, I won’t be satisfied until I hear a date cemented into a press release.

Lastly, a Notion Ink support thread indicates that Android 4.0 Source Code, aka Ice Cream Sandwich, will be published on November 17th. This makes sense since it would coincide with the date of the first ICS device launches.