Samsung and Google cancelled their Nexus Prime announcement but we’re not letting that spoil our CTIA trip. After pouring out some of our Ice Cream Sandwich, Chris and I promptly got hands-on video with another of Samsung’s highly anticipated devices: the Samsung Stratosphere.

Launching October 13th on Verizon Wireless for $149.99 after a mail-in rebate, the Stratosphere offeres a solid combination of features that will get it’s fair share of devoted users. The 4-inch Super AMOLED screen, 5-Row QWERTY keyboard that slides out, 5MP camera on the rear, 1.3MP camera on the front offer a pretty great start. 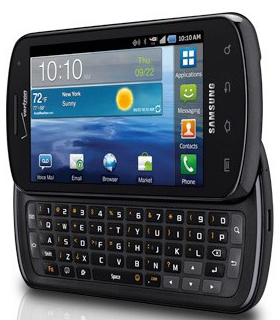 The texture of the back plastic cover was rather interesting and likeable. It felt almost like it was coated in a fabric, very different from the glossy exterior of many Samsung devices. I really liked it, but it’s an obvious matter of personal preference. On the flip side, I wasn’t psyched about seeing hardware buttons for the Home/Back/Menu/Search key on the slideout keyboard. They’re already easily accessible as capacitive buttons when the keyboard is both open and closed. I’d much rather have that keyboard real estate for larger buttons, more space, or something else.

Another key feature of the Stratosphere is that it connects to Verizon’s 4G LTE network, giving you top speeds in 100+ cities and essentially future proofing your phone. It also comes with a 1GHz processor running Android 2.3.4.

I think the Samsung Stratosphere will serve Verizon’s lineup well, offering a solid slideout QWERTY device. The specs aren’t overwhelmingly beastly, but they’re more than good enough for most to get the job done and the price is competitive. I’ve been extremely impressed with Samsung’s cameras so don’t be fooled by the 5MP camera; I’d be willing to bet it’s better than the 8MP camera of many competitors.

Stay tuned for our full review of the Samsung Stratosphere and more coverage from CTIA!