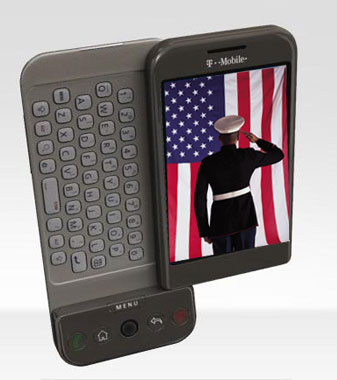 Deutsche Telekom’s stock has tumbled in recent days and much of that was tied to a public announcment which downgraded their estimated financial outlook for the remaineder of 2009. The company, who trades with stock ticker (DT), owns the T-Mobile and inherently are responsible for our beloved G1. And when I say “our” I mean all 1,000,000+ of us. That’s right, included in that Press Release was mention that T-Mobile USA has sold over 1 million G1s!

In addition, the advance costs in the first quarter of 2009 resulting from the 3G roll-out contributed to the decline in results. The sale of more than 1 million G1 handsets since the market launch in October 2008 alone, and a total of over 1.5 million 3G-capable handsets sold in the United States, clearly shows, however, that customers are demanding products and ser-vices based on these increased bandwidths and that the provision of these products and services is an important selling point in competition. T-Mobile USA will therefore increase the number of POPs covered by the 3G net-work this year from 107 million to 205 million.

For those inevitable iFanboys out there yes who have probably already scrolled straight down to the comments to tell us how much more the iPhone sold in a compareable amount of time I want to throw 3 quick words at you: I don’t care.

While T-Mobile is one of the “Big 4” carriers in the United States, some would say it is a distant 4th. When the G1 launched in September it was only sold in markets with 3G connectivity and there were only 21 of those. Since then T-Mobile has made the G1 accessible to all and their 3G footprint now covers 107 million potential customers. To illustrate how new the TMO 3G network is we bring you another statistic: 66% of all 3G enabled phones used on the carrier are… G1s.

TelephonyOnline says this is dangerous:

But the dominance of the G1 on T-Mobile’s network could make it vulnerable. If the G1 loses its momentum, T-Mobile doesn’t have much to fall back on.

Ummm… how about the G2. Or the G3. Or maybe the G4, G5 or G6? Or how about a completely new line of Android handsets from a carrier besides HTC? Plus all of the other non-Android devices T-Mo acquires. And didn’t the T-Mobile Sidekick LX 2009 just get announced? Great article but I disagree strongly with the above quote.

The fact is that there aren’t that many game changing devices out there. AT&T has the iPhone and has been criticized for their dependence on the device for the company’s overall success. Verizon has the BlackBerry Storm which has mixed reviews and Sprint has the Palm Pre which some thing will be a savior for the company and others think it will lead to the company’s demise.

T-Mobile is in great shape and as long as they continue to support the further development and adoption of Android, things are only going to get better.