Verizon's Sony Xperia Z4v is a bit more beefy internally than the regular Xperia Z4, notably in its use of the Snapdragon 810 chipset. It's a 64-bit piece of silicon that has gotten flak for apparent overheating issues, but it's still a pretty powerful beast.

Their device also sports 2560 x 1440 resolution for its 5.2-inch display, as well as a roomy 32GB of internal storage (with microSD for expansion, if you need). You can also expect a 3,000mAh battery with built-in wireless charging (both Qi and PMA standards) and Quick Charge 2.0. Finally, you'll get a 20.7 megapixel Sony sensor on the rear and a 5 megapixel camera on the front for your photo and video taking needs.

It'll be available in Black or White in Summer 2015. 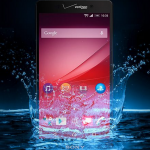 Sony Xperia Z4v for Verizon has officially been cancelled

After missing its scheduled summer release, things weren’t looking to hot for the Sony Xperia Z4v launch on Verizon. A souped up version of the Sony Xperia Z3+, Verizon had apparently planned on launching the phone sometime in August. Looks like that’s no longer happening.

Sony has revealed that Verizon’s Sony Xperia Z4v will launch August 13th. The device, if you don’t remember, is a souped of version of the Sony Xperia Z3+.

Verizon has announced that they’ll be carrying the Sony Xperia Z4v later this summer. Their variant is a bit more beefy internally than the regular Xperia Z4, notably in its use of the Snapdragon 810 chipset.
See All