The Samsung Droid Charge was the 2nd phone released in a lineup of 4G LTE enabled smartphones for Verizon's network.

It comes with a 4.3-inch Super AMOLED Plus screen (no more Pentile Matrix), physical buttons just beneath the screen, 8MP rear camera/ 1.3MP front-facing camera, HDMI-out, and 1GHz Hummingbird processor. It launched with Android 2.2 and came with a 16GB micro sd card.

The Samsung Droid Charge will definitely have a hard time flying under the radar. It could, however, fly past competition with Verizon's lightning fast 4G LTE speeds. 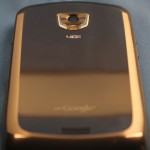 The Samsung DROID Charge is the second 4G LTE capable phone for Verizon Wireless which immediately makes it a must-consider device. Although 4G network problems caused a delay in the April 28th launch date, Samsung’s first 4G phone for Verizon will be arriving sooner rather than later. The questions is – when it arrives – … 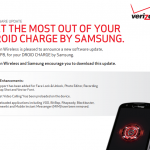 Yes, you read that correctly. The Samsung Droid Charge has a new update waiting in the wings at Verizon. The carrier just posted the changelog for the new software, an overall minor upgrade to the Droid Charge’s firmware. The software brings the phone’s build to i510.FP8 but stays put at Android Gingerbread.Included in the update, … 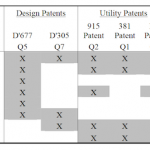 Apple files to have 8 Samsung phones banned in the US, including most of the Galaxy S2 line

Another exciting development (well, exciting for us spectators anyway) has taken place in the ongoing post-trial happenings between Samsung and Apple. The latter has filed to have 8 of Samsung’s devices banned from the market.These include the Samsung Galaxy S2 for T-Mobile, AT&T, the Epic 4G Touch, the Skyrocket, the Galaxy S Showcase, Galaxy S … 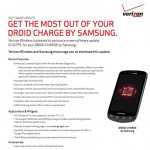 Verizon has been teasing us a bit on an upcoming update for the Samsung Droid Charge. They posted information about the update last week only to pull it with no actual rollout of new software occurring. Now Big Red has posted the full changelog for software version FP5, one that largely mirrors the log for … 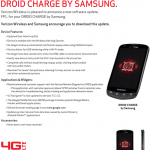 DROID Charge owners are next in line to receive an upgrade for their phones, but this isn’t Ice Cream Sandwich. In fact, I wouldn’t count on Ice Cream Sandwich unless you’re using a custom ROM. No, this update bring the build to FP1 and the biggest change is the addition of the Verizon Remote Diagnostics … 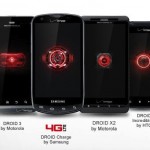 Verizon Wireless is having a few sales over on their site for the next couple of days. In what could be seen as an attempt to clear out their existing stock of their 3G smartphones, the Motorola Droid 3, Motorola Droid X2, HTC Droid Incredible 2 and Samsung Droid Charge are all being offered up … 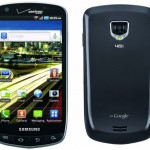 We’ve gotten enough reports in the past 10 or so minutes to believe that Samsung and Verizon are finally issuing the upgrade to Android 2.3 Gingerbread to the DROID Charge. It’s an over-the-air process and it may be staggered, meaning if you can’t get it right this moment you’ll be able to get it sometime …

Some evidence has cropped up showing that the Samsung DROID Charge, Verizon’s first Samsung LTE phone, will be getting an upgrade to Android 2.3 this Tuesday, November 29th. Alongside the gingery features we know Gingerbread brings, we’re also expected to see the following changes, improvements and additions: Updated Download Manager app – from where you … 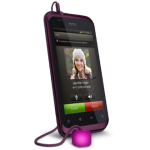 Verizon Has Security Update on the Way for the HTC Rhyme, Gingerbread for the Droid Charge

Verizon has a couple of updates queued up as we head into the Thanksgiving holiday. Both the HTC Rhyme and Samsung Droid Charge are in line for updates, as revealed by recent changelog postings to Verizon’s support site. For the Rhyme, an 8.89MB update moves the handset’s softwrae to build number 1.26.605.11, which brings several … 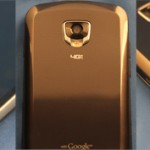 On the quest to receiving an official Gingerbread OTA update for the DROID Charge, MyDroidWorld has received another leaked build for the device. It’s EP4P, but there are likely only bug fixes and other behind-the-scenes optimizations. Still, we love an updated build just as much as the next guy. This one is problem free, apparently, …

Verizon has dropped the price of the Samsung Droid Charge to a more reasonable $199.99 on a new two-year contract, a move most noticeable for what it implies rather than the savings it provides. That is because it is widely assumed that the Charge will give way for the upcoming Samsung Galaxy Nexus (Nexus Prime), …
See All