The HTC Inspire 4G was released as the first phone to run on AT&T's 4G HSPA+ network. The device features a large, 4.3-inch display, 8MP camera capable of 720p HD video capture, and a 1GHz Snapdragon processor. The name of the game here is performance, and HTC has done it again with a phone that looks as good as it performs.

The phone is a veritable media powerhouse, with Dolby + SRS Surround with noise cancellation and DLNA support for streaming contect to a big screen TV. 4G data speeds come in handy for steaming video and audio with little effort. The HTC Inspire 4G also features HTC Sense for complete integration of your contacts, messages, and social networks into the Android interface. 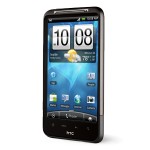 HTC has posted the details of an update that should be headed out to owners of AT&T’s Inspire 4G. The move to software version 3.20.502.2 brings the Inspire to HTC sense 3.0 and includes call optimizations, improved security, and background data enhancements. While HTC’s support site says the update will being rolling out to users … 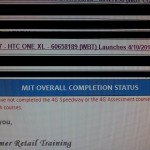 As of yesterday AT&T has kicked off their web-based training (WBT) for the HTC One XL. The above photo comes courtesy of xda-developers forum member EGBTMagus and was accompanied by another screenshot that could shed some light on when the latest flagship from HTC will be available in the States. We see an “end of life” … 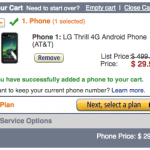 The LG Thrill 4G has been available for just a little while and Amazon has already got a good deal on it waiting for you. They’re willing to part ways with the device for $30 as long as you sign a new two-year contract. Both new and existing users can get in on this for … 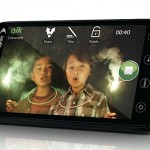 According to NPD Group, the best selling smartphones from April through June (Q2), all happened to be devices that launched last year and not this year. So, even though we saw some great devices like the Motorola Atrix, HTC Thunderbolt and LG G2X — none of these managed take the top spot from last year’s … 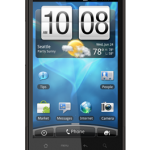 Gingerbread Now Rolling Out for the HTC Inspire 4G

After a bit of confusion surrounding the initial rollout of the Android 2.3 update for AT&T’s HTC Inspire 4G, users are reporting that the update has begun in earnest. The over-the-air update has begun rolling out to handsets, and HTC has updated their Inspire 4G support page with the new OS changelog and a manual …

AT&T: All 2011 Androids Will Get Gingerbread, Confirms LG Thrill 4G Will Be $100 at Launch

A bit more news from AT&T today. First up, if you’ve bought an Android phone from them this year expect to get a Gingerbread upgrade if you haven’t already. Phones like the Inspire 4G and Infuse 4G have yet to get 2.3, though AT&T says those users will see it in a matter of weeks. … 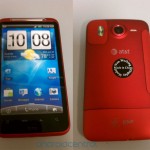 Remember that image of the red HTC Inspire that was leaked out a few days ago? Well, it looks like el caliente version of HTC’s popular Inspire 4G could be possibly launching this week on AT&T. But that’s not all, if this leaked Radio Shack price tag is any indication, they may be one of …

If you’re looking for something a little more colorful than your standard grey/black smartphone, check out this version of the HTC Inspire 4G headed to RadioShack. The red color scheme looks mighty poppin’ on this 4G handset from AT&T. Release details are scant, meaning there are none. Also without a price or date is a … 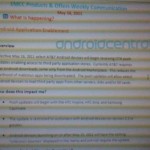 It’s time. Time for AT&T to give you a bit more freedom over your Android smartphone, that is. It’s been leaked that they’ll begin issuing updates to select Android handsets – including the HTC Aria and Inspire 4G and the Samsung Captivate – that’ll allow users to sideload applications. (IE, install applications from sources outside … 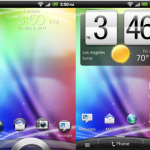 While the HTC EVO 4G was the first device to get some Sense 3.0 port love from the folks at XDA, it wasn’t perfect and was just barely usable as a daily driver.Many of you have flashed it and reverted back to your previous ROMs. The only way you’re going to get a fully-working Sense …
See All