How to bypass Google account verification after resetting your smartphone 2022

In the past, it was pretty common to see smartphones stolen and resold. This is because the thief would just need to factory reset your smartphone and it would be almost like brand new again. These days, smartphone theft still exists, but companies have wisened up and introduced security features to discourage theft.

One of those features for Android is Factory Reset Protection. This is designed so that in the event your phone is stolen and someone tries to wipe it, they can’t unless they have proven themselves to be the owner of the phone, usually by verifying who they say they are by logging into their account.

Thankfully, there are FRP bypass tool that will help you get around that problem and unlock Android phone, so if you are in such a situation, then here’s how to bypass Google account verification after reset using tools such as iToolab UnlockGo for Android.

Why use iToolab’s UnlockGo for Android?

There’s a good chance if you search for factory reset protection software that quite a number will popup, so why would you and why should you choose to use iToolab’s UnlockGo?

Samsung is one of the most popular brand of smartphone right now so there is a good chance that you might own one of their devices. iToolab’s UnlockGo will work great with Samsung devices and will play nicely with Android versions dating back as Android 5.0 and all the way up to Android 12 if you need to unlock Samsung phone.

With Android UnlockGo, you won’t require a Samsung account, you won’t need Alliance Shield, you won’t need to use a secondary device, and there are no requirements for additional APKs. In fact, the entire process is so simple and straightforward to use that even if you’re not particularly tech savvy, you will have no issues navigating the software’s interface.

One of the ways that you can remove a screen lock on your Samsung phone would be to wipe it. Obviously that’s not ideal if you haven’t backed up your data or don’t want to wipe your phone, but iToolab’s UnlockGo actually works with older Samsung devices, up to the Galaxy S7, where it can remove the phone’s screen lock while preserving your phone’s data.

This will work with devices like the Galaxy S3, S4, S5, S6, the Galaxy Note 2, 3, 4, and 8, and also the Galaxy Tab if you have a Samsung tablet that requires similar treatment. So if you ever find yourself in this kind of predicament, then UnlockGo might be the best way to go about it.

Now, bypassing factory reset protection is one of the features of iToolab’s UnlockGo, but it can actually do more. It will be able to allow users to bypass other forms of security such as PIN, Pattern unlocks, passwords, and even fingerprints!

This might be especially useful for users who might be forgetful, like your grandparents or elderly parents who might have forgotten their PIN or pattern to unlock their phone. Instead of rendering their phone into a brick with multiple repeated and failed attempts, iToolab’s UnlockGo will help these users bypass those issues and unlock their devices quickly and easily.

While UnlockGo seems to be catered more towards Samsung devices, due to them being a more popular option, those who use non-Samsung phones won’t need to feel left out. This is because iToolab claims that in addition to Samsung phones, their UnlockGo app will play nicely with over 2,000 different brands and models of Android phones.

We’re talking about brands such as Huawei, Google, Motorola, LG, Vivo, ASUS, ZTE, Lenovo, Honor, Infinix, Sony, Xiaomi, and more! This means that regardless of the brand or model of phone you’re using, as long as you’re using any version of Android up to Android 12, iToolab’s UnlockGo will be able to provide you with all the bypass tools you’ll need.

So if you’ve decided that UnlockGo is something you think you could use to bypass FRP, then here’s what you need to know on how to go about using the software to unlock Samsung phone. 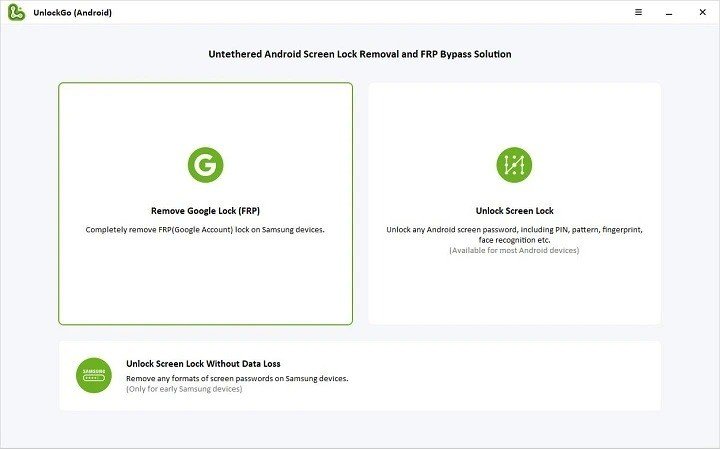