Back in 2021, Twitter announced that they would be getting into the subscription business by launching Twitter Blue. The service started out at $2.99 a month, which honestly isn’t too bad if you’re a hardcore Twitter user. Unfortunately, that’s about to change.

In a tweet by Matt Navarra, he has shared screenshots of an email he received regarding Twitter Blue in which Twitter has announced in the email that a price hike will be coming to Twitter Blue. Now instead of $2.99 a month, it will cost $4.99 a month, which is a jump of $2 from before.

Twitter does mention in the email that those who had subscribed ahead of the price hike will be able to maintain the $2.99 subscription until October, which means that this new price will only affect users who sign up now. We can’t say we’re surprised given the rising costs no thanks to inflation, but at $4.99, it does make it a harder pill to swallow for casual users.

For those unfamiliar with Twitter Blue, it basically offers users access to features not available to non-subscribers. We’re talking about ad-free articles, custom app icons, themes, an undo feature, access to features that are still being tested, and so on. Like we said, it probably appeals more to hardcore users and fans rather than the average user, but now at $4.99, we wouldn’t be surprised if some of those fans are now reconsidering their subscription. 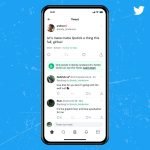