It would be easy to dismiss the new Galaxy S22 and the S22 Plus as just another iteration of the Samsung formula we’re seen for the past few years. The defacto-standard that all other Android phones are measured up against and the only flagship smartphones on the Android side worth considering if you’re trying to decide between an iPhone and everything else.

To be fair, that’s exactly what these two phones deliver, but they’re also so a bit more.

It’s been 5 years since Samsung has been giving us this big and little brother combo. In that time, we have seen a few different formulas with the larger device being called the Edge or the smaller one getting stripped of premium build materials or given lesser cameras. But this year, Samsung’s keeping things simple by only changing the display, batteries, and charging speeds on these two phones while keeping everything else the same. That’s right, it doesn’t matter which one you choose, you’ll be getting the same chipset, storage, RAM, cameras, and even build material, which makes me pretty happy since I have a soft spot for smaller devices. 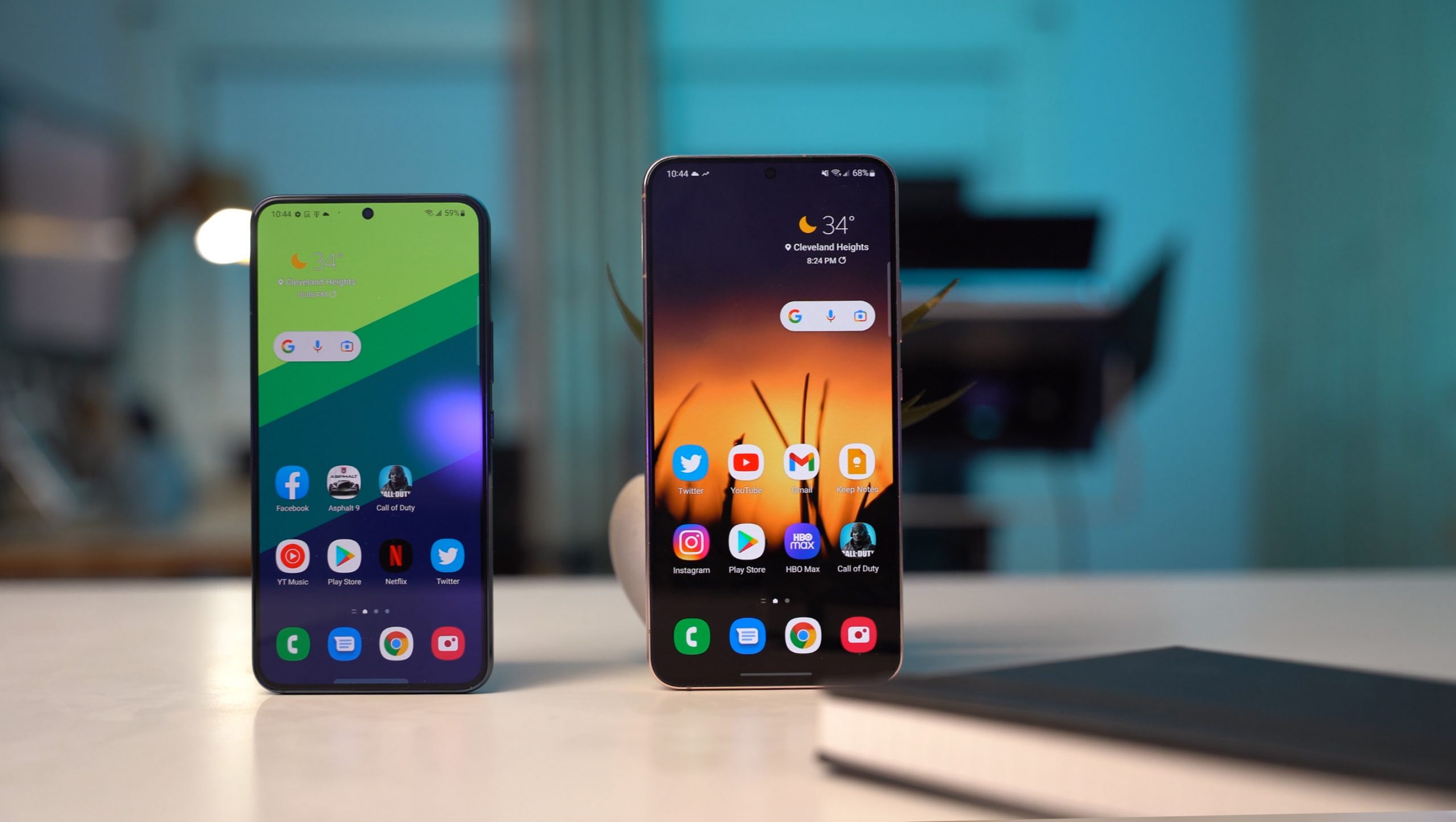 Don’t get me wrong, the regular Galaxy S22 isn’t exactly small with its 6.1-inch display, but it’s quite a bit more manageable than the 6.6-inches you get on the Galaxy S22+, at least for me.

If you were hoping for an LTPO display on either of these phones, you’ll be disappointed to hear that Samsung is only using the new display tech on the Galaxy S22 Ultra, but you still get a variable refresh rate that maxes out at 120Hz. Other than that, there’s really nothing to complain about with the displays used on both phones and I definitely have to commend Samsung for going with flat panels and glass on both of these whereas the S22 Ultra sports a curved display. Yes, a flat panel can make the phone feel a bit larger, but it’s a lot easier to type on, and not having to deal with the extra glare that the curved display adds is a huge positive in my book. Samsung’s also upped the brightness of the panel to 1750 Nits on the Plus and 1300 Nits on the regular S22, giving both phones incredible outdoor visibility, something I’m sure we can all appreciate. 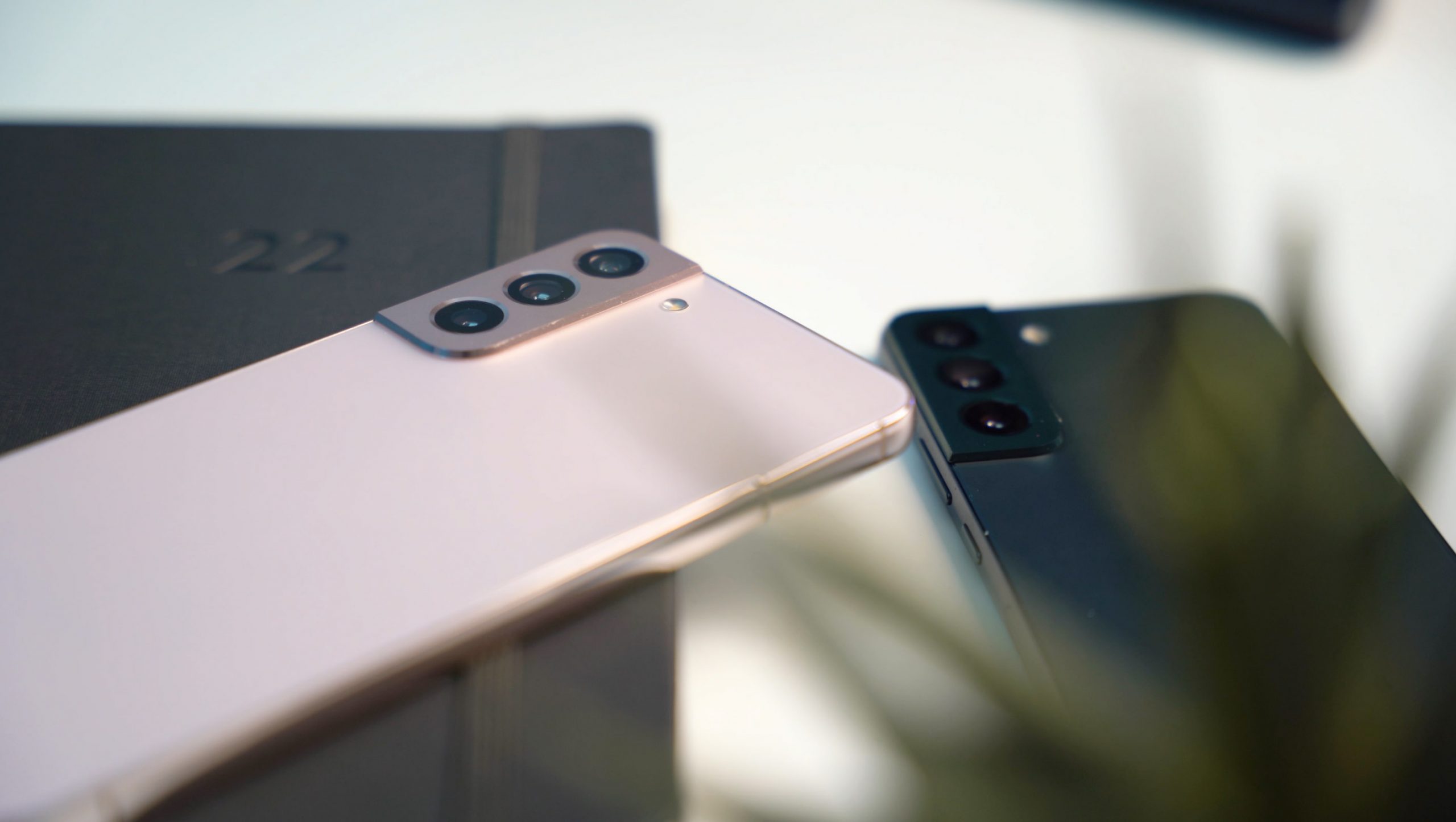 To finish off the outside build of the phone, the S22 and the Plus both feature Gorilla Glass Victus+ on the front and back with a metal frame along the edges which have been rounded out so that it doesn’t cut into the palm of your hand. I do have to note that it’s nice to see the glass panel on the back of the regular S22 after Samsung swapped it out last year for plastic.

If you’re like me and keep your phone naked to appreciate the work the Samsung’s engineering team put in to make this phone look and feel as good as it goes, you’ll definitely appreciate the overall fit and finish of both of these phones. 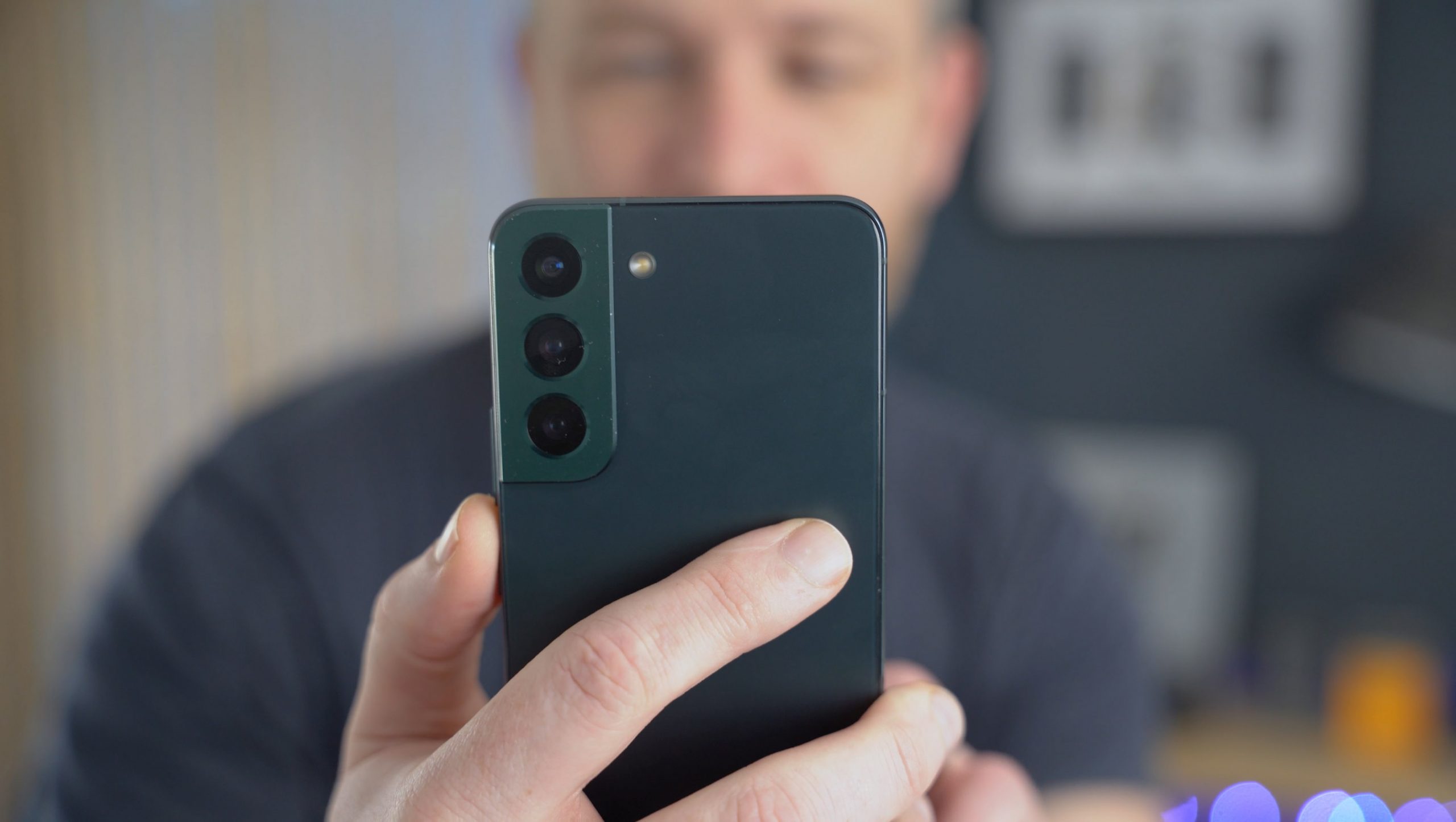 Anyone looking for a powerful phone will be pleased with the performance of the S22 and its larger sibling. Both devices use the same Snapdragon 8 Gen 1 with 8GB of RAM configuration which delivers stellar benchmark numbers and an incredibly smooth user experience when it comes to gaming and day-to-day tasks. Like the Snapdragon 888, this new chipset has a tendency to run hot when pushed to its limits, but its throttled performance is higher than the peak performance of its predecessor which is something every mobile gamer will love.

It would have been nice if Samsung gave us the option to upgrade from 8 to 12GB of RAM with the higher storage options that are available, but I didn’t run into any multi-tasking issues with either device. 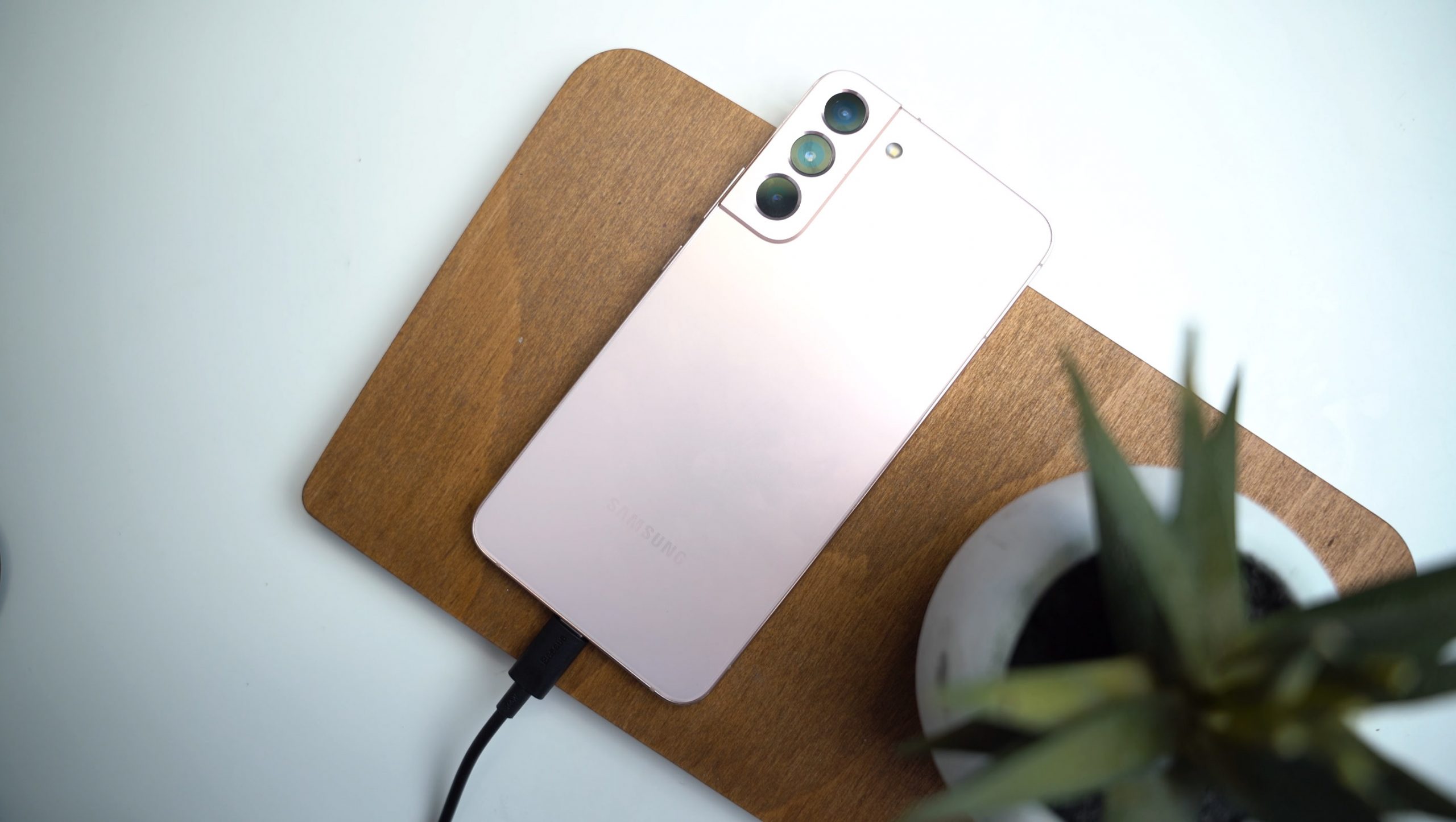 When it comes to battery life, both phones delivered nearly identical results when compared to their predecessors. The S22 has a 3700 mAh battery while the larger S22+ gets a bump to 4500mAh.

In our battery test, the S22 lasted 9 hours and 54 minutes while the Plus held on for 11 hours and 12 minutes. In day-to-day use, the S22 typically had a 12-15% charge after 14 hours while the S22+ finished out the day between 18%-21% and that’s with my typical heavy use which includes playing games, writing emails, scrolling Twitter, Instagram and my news feeds, along with using the cameras as well for at least 5-6 hours per day.

The results aren’t spectacular and you’ll definitely need to top the batteries up of either device if you’re expecting a late night out on the town or plan to use the cameras late in the evening. If you want better battery life, flagship smartphones definitely aren’t the best option. 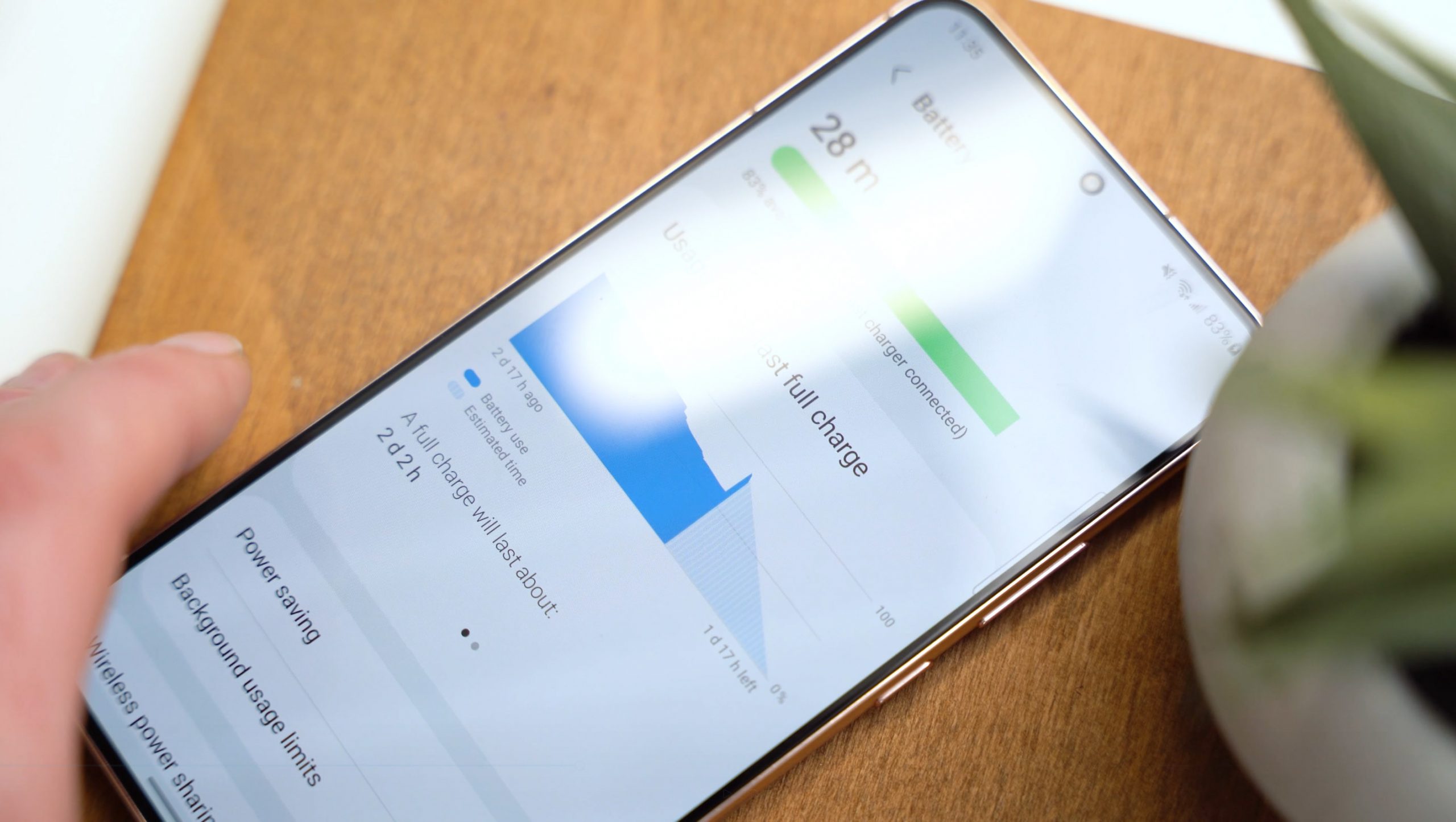 Naturally, I need to mention that the Samsung Galaxy S22 and the S22+ don’t come with power bricks in the box, you get a USB-C cable and that’s it. If you already have a charging brick from your old phone, you should be just fine, but you might need to spend a bit of cash on a faster charger if you want to take full advantage of the new 45W fast charging that the Galaxy S22+ comes equipped with, reducing it charge time by a bit more than 10%. The regular Galaxy S22 still charges at 25W, but with its smaller battery, it still charges from 0-100% in about the same time as the S22+. 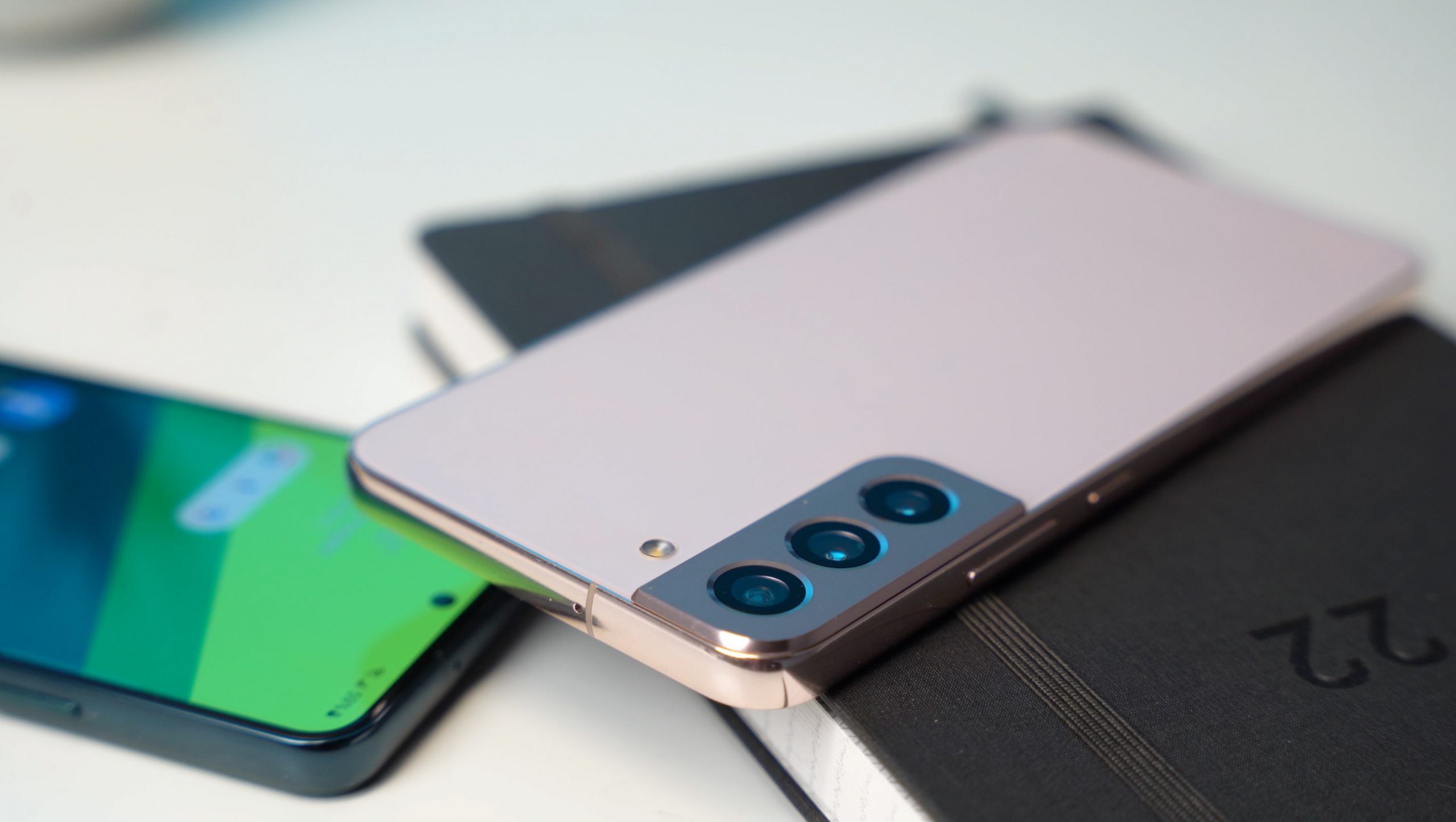 As I’m sure you’re well aware, Samsung’s flagship smartphones are typically well-regarded when it comes to photography. For years, their image processing was a bit over the top, but they’ve toned things down recently and the S22 lineup continues that trend towards more natural-looking shots.

Both phones sport the same exact camera setup with a new 50MP main camera, a 12MP ultrawide, 10MP 3x telephoto, and a 10MP selfie camera. But Samsung didn’t just add better hardware and call it a day. They’ve also improved their computation photography for better dynamic range in tricky lighting situations if your subject is backlit, upped their game with low light photography. However, I’m not a fan of the branded Nightography name they’ve given the low light mode in the camera. But they’ve dramatically improved their subject cutouts in portrait mode, even adding a pet portrait mode to help isolate your furry friend much better, something all pet owners will love.

The overall quality of the images is a noticeable improvement over last year’s S21 lineup, especially with the improved 3x zoom camera and when taking pictures at night. I also have to point out that the selfie cameras on these phones are phenomenal. I’m a big fan of the selfie camera on Google’s Pixel 6 Pro, but I’d say that Samsung’s selfies on the S22 are just as good and might be a half step ahead in certain lighting conditions. 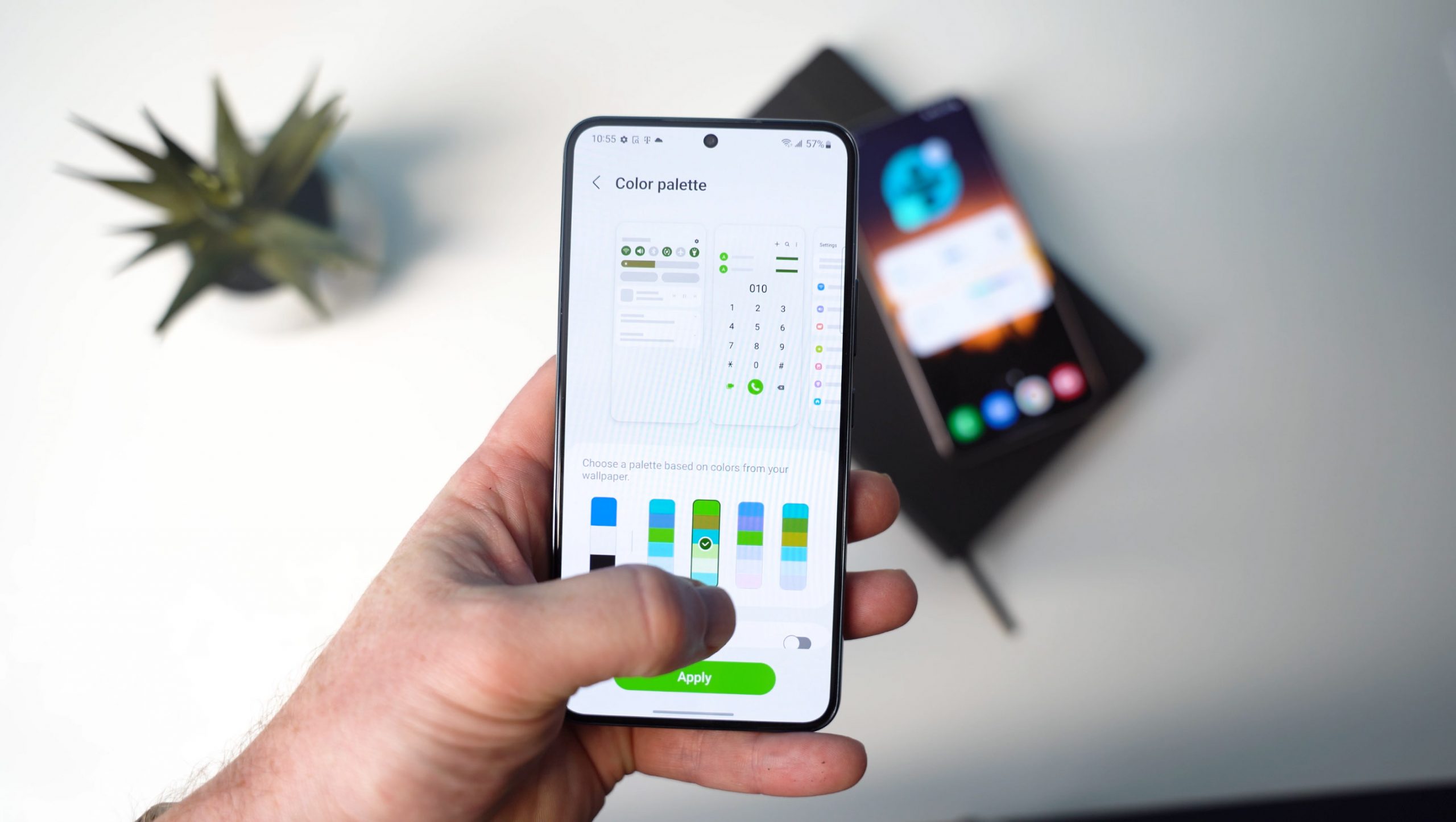 For me, one of the issues I’ve always had with Samsung phones is the software. You get Android 12 with One UI 4.1 which means you get all the new features that Google rolled out with the latest version of the platform, but in Samsung fashion, things really don’t look much different. One UI has a handful of new widgets to spruce up the home screen and a new color palette to help customize system colors which is pretty similar to what Google rolled out to its Pixel smartphones. The new security features are also present, showing you when the microphone and camera are being used from an app and giving you the option to turn them off on the system level if you’re worried about security.

But you still get all of Samsung’s bloatware plus 4-5 apps from Microsoft that you’ll probably never use. Bixby is still the default digital assistant if you long-press the home button. Things are functional, once you remove half of what’s pre-installed, but it all feels a bit dated at this point, especially the side-scrolling app drawer that’s not even alphabetically sorted by default. 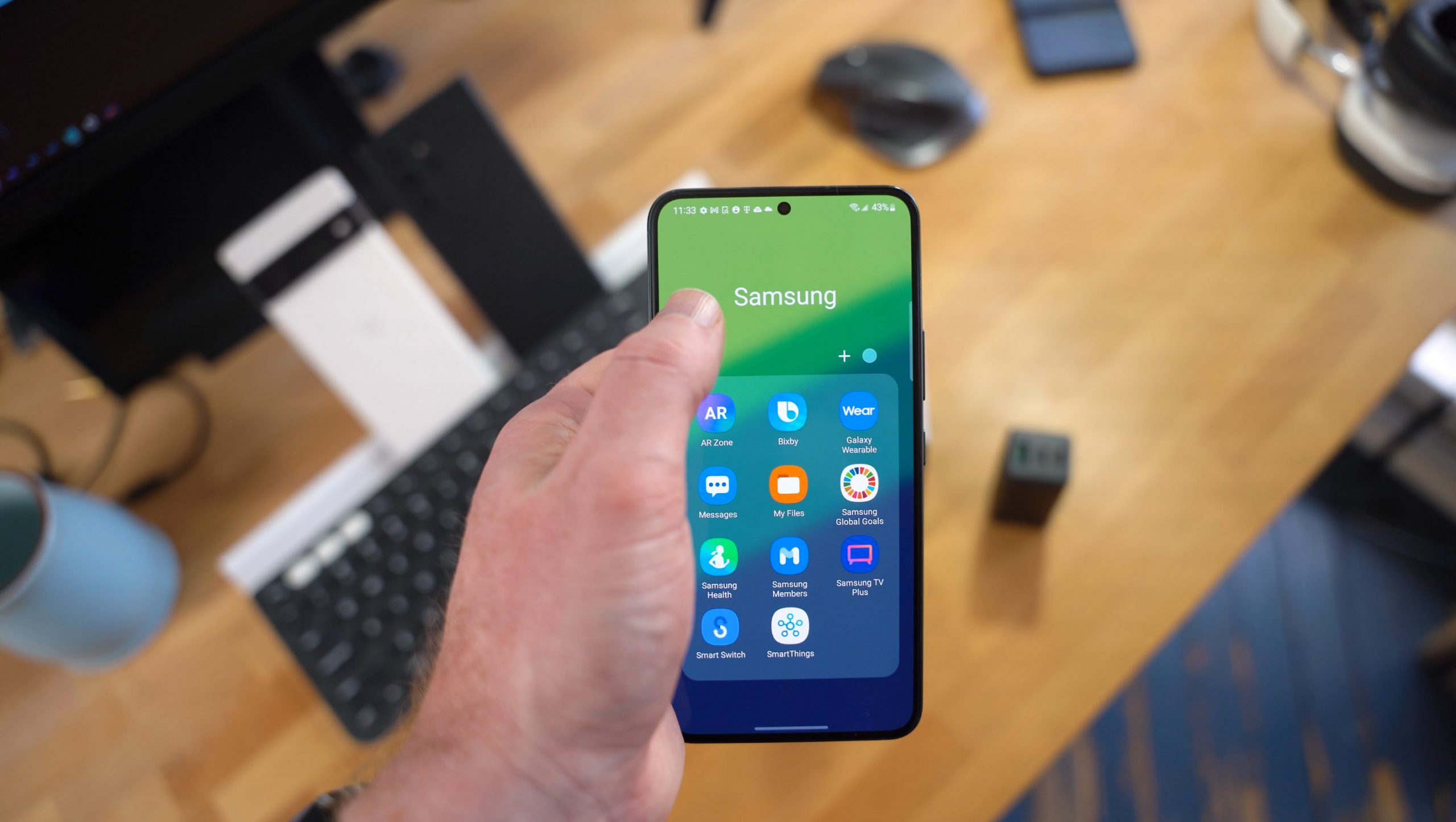 The good news is that both the S22 and the plus will be getting four years of Android version updates and five years of security patches which means these two phones will be getting Android 16 which is expected sometime in 2026. If you haven’t checked, this upgrade policy is even better than the three years of OS updates Google’s promised for its Pixel devices. 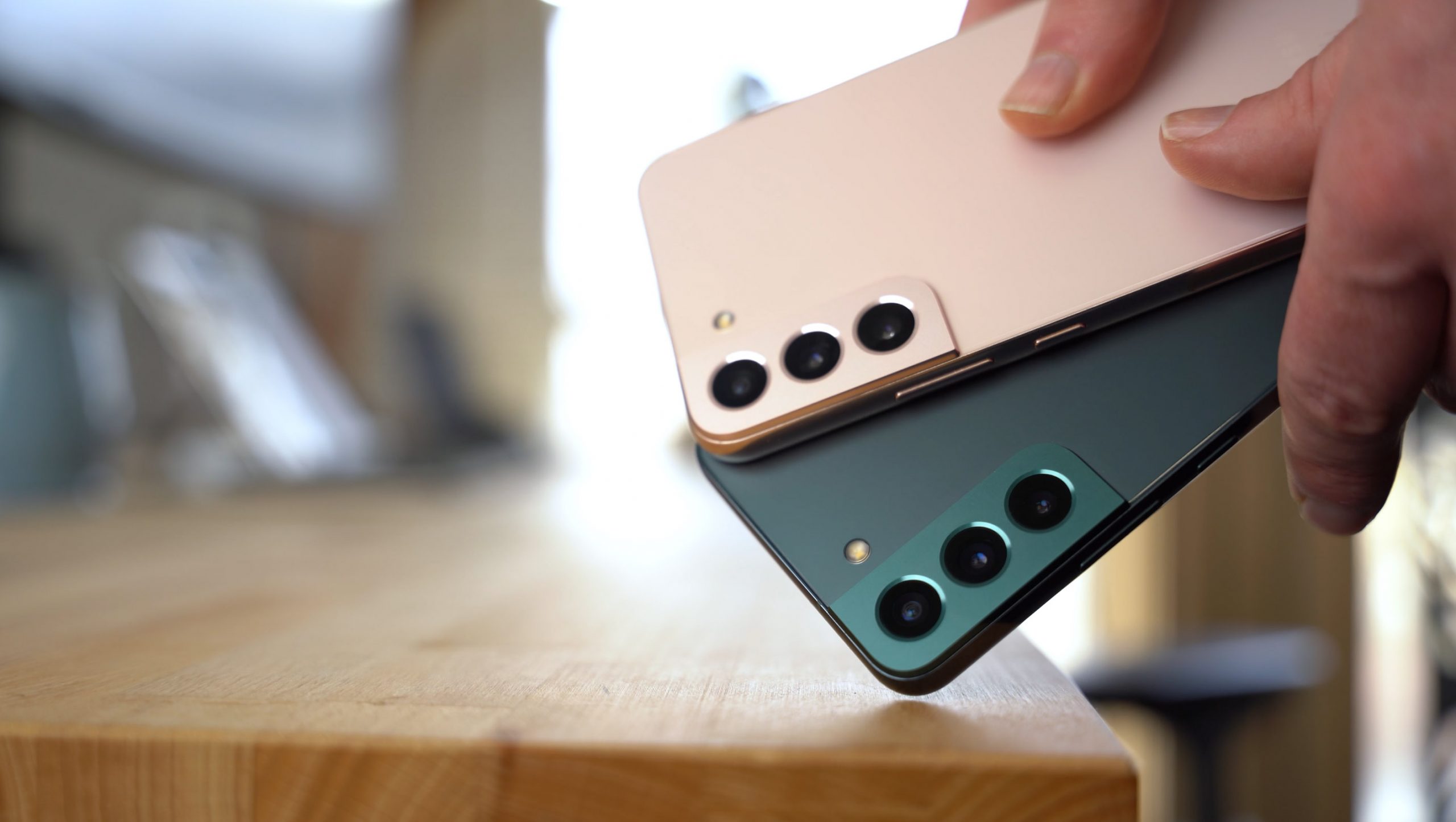 So, after all that, you might be asking yourself if you should actually buy either of these phones. The simple answer is yes. If you don’t mind the $800 and $1000 sticker prices for the S22 and S22+, you should be quite happy with your purchase. You simply have to choose which size phone you want.

There is a decent improvement in overall system performance when compared to last year’s S21 lineup. That being said, if you’re on a Galax yS21 device, my recommendation is to wait things out another year for an upgrade. Just keep in mind that Google’s Pixel 6 is a great alternative to both of these phones, coming in at $200 less than the S22 and the Pixel 6 Pro is also a great alternative to the S22+ at just $900.

If you’re simply looking for a new Samsung smartphone, the Galaxy S22 and S22+ are great options. For those who aren’t sold on the Samsung ecosystem, there are better options out there.