If there’s one thing that Apple got right with the iPhone 12 and 13 series, it’s the re-introduction of MagSafe. While some companies are continuing to push the limits of how fast we can wirelessly charge our devices, there’s still one pretty frustrating problem.

Imagine this scenario, that we’ve all likely been in at some point. You come home from work and you need a bit of juice in your phone or your headphones to get through the rest of the day. You place your smartphone or headphones case on a wireless charger, expecting everything to be hunky-dory. Only to find out an hour or so later, that nothing has changed, and your phone is even closer to meeting its daily demise. 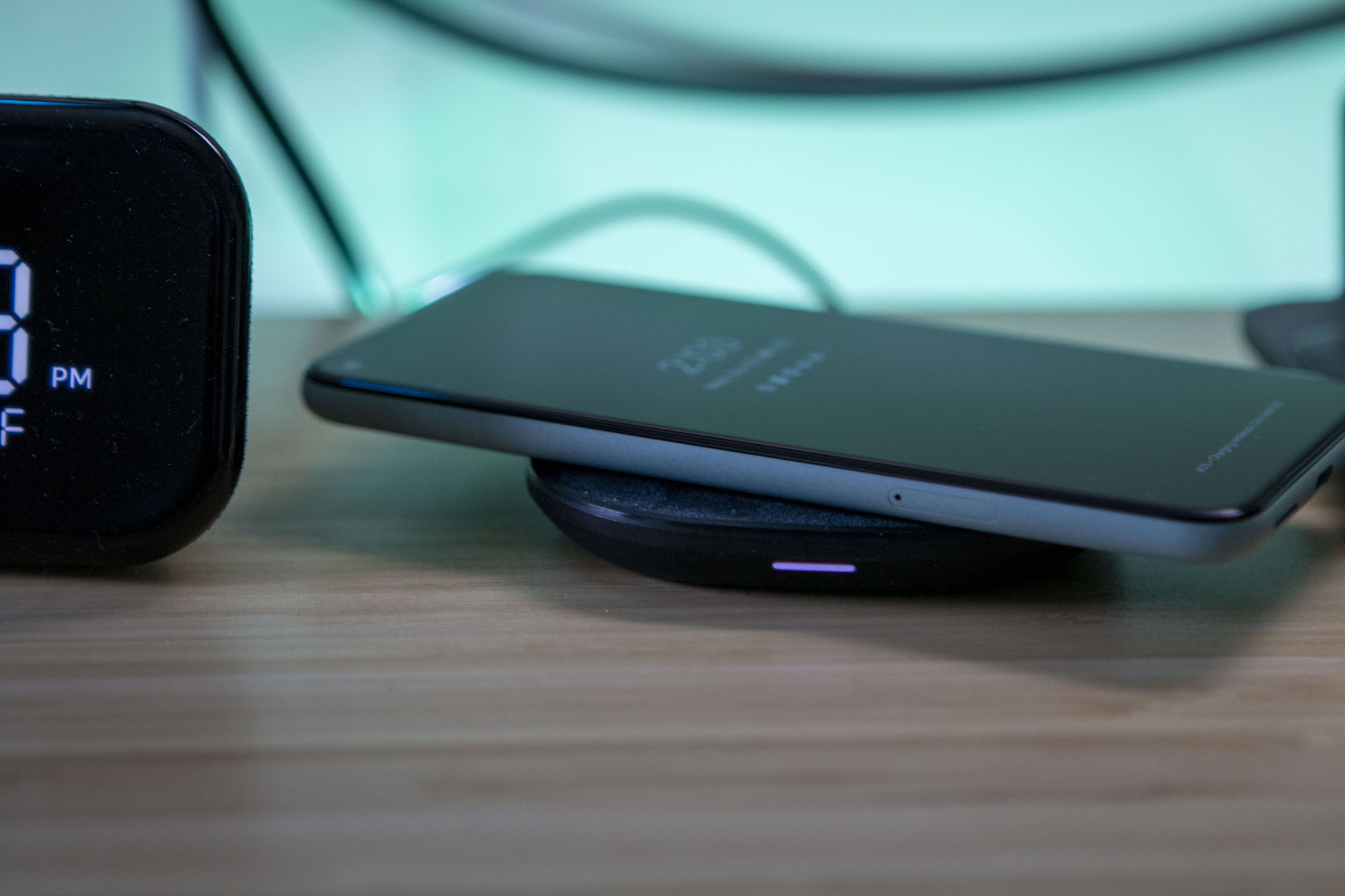 MagSafe solves this problem, as it uses a series of magnets in the iPhone and on the charger itself to snap the phone into place. Apple has even expanded its MagSafe usage into the latest AirPods 3, by implementing support into the charging case.

One of the problems with MagSafe is that the adoption by third-party accessory-makers was a bit too long. Belkin was one of the first companies onto the scene, as the company partnered with Apple. But now, we’re seeing more and more companies jump onboard, including Anker.

Recently, Anker announced its new MagGo lineup of accessories, all focused around making it easier to charge your device from wherever you are. 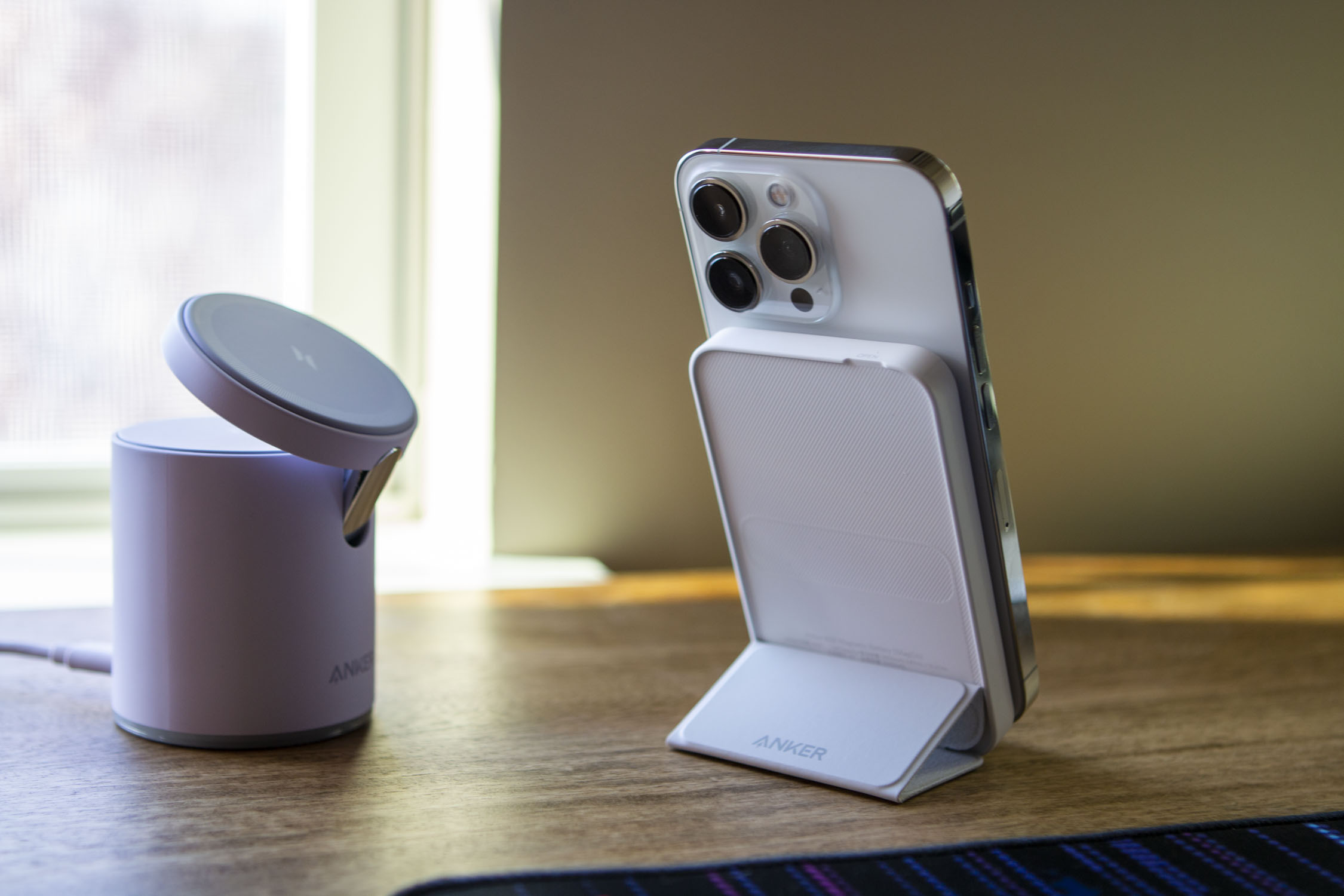 Starting off with the MagGo 622, this is a portable power bank that doubles as a phone stand. And as you might expect, it works with MagSafe, snapping right into place on the back of your phone. The MagGo 622 has worked its way into my daily carry bag, replacing Apple’s own MagSafe wireless charger. It’s not because of the difference in battery sizes, but instead, it’s the ability to use the charger as a phone stand.

Now, when I go to sit down at Starbucks to get some work done, I can prop my phone up, while charging it. This allows me to keep an eye on any incoming notifications, while also ensuring I have enough juice left in the tank even if I’m using my personal hotspot. 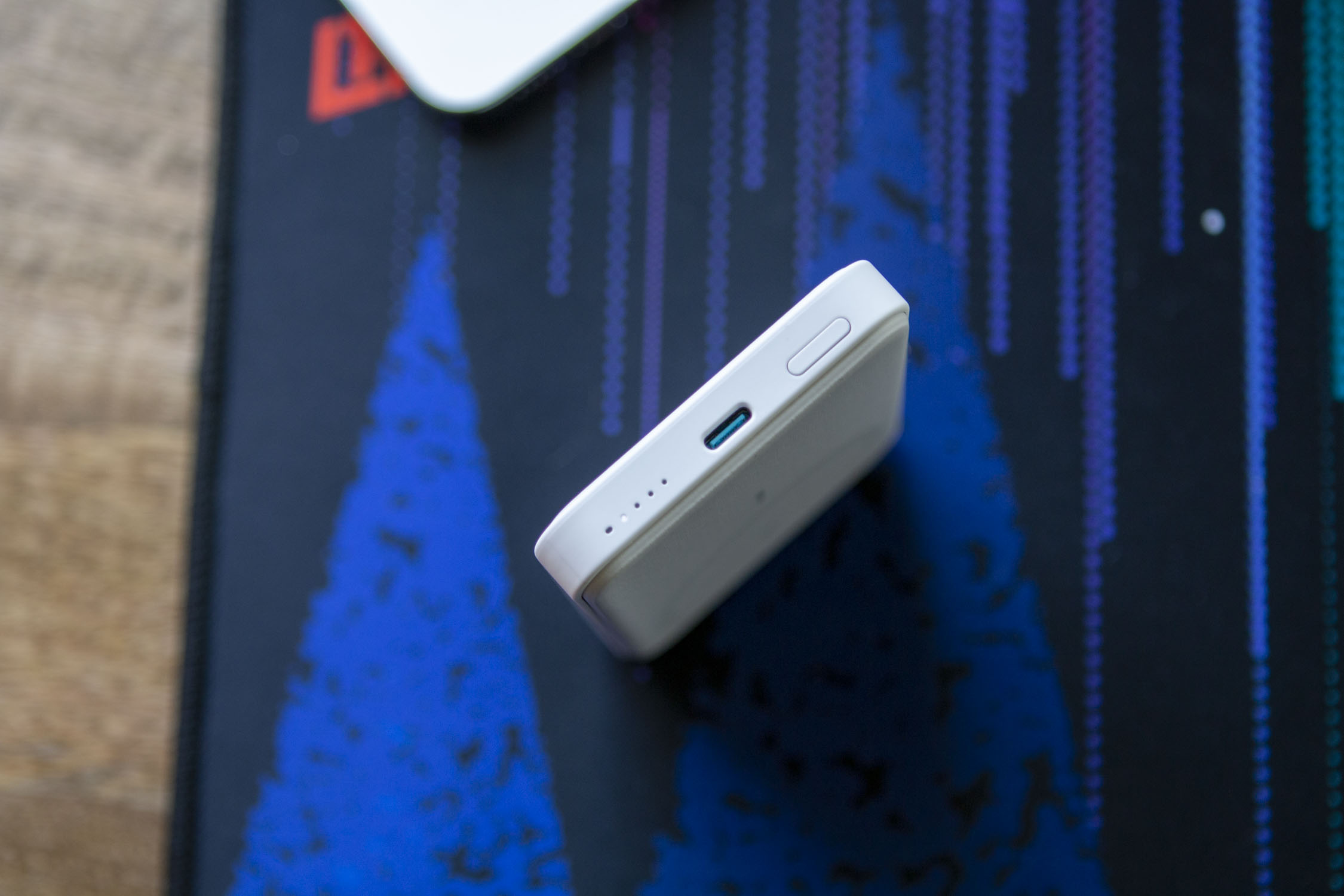 The MagGo 622 features a 5,000mAh battery, which is more than Apple’s own charger. This isn’t enough juice to get my iPhone 13 Pro all the way up to 100%, but it will take up to around 75% before needing to recharge the battery bank.

Keeping track of the remaining battery is a breeze thanks to the five LEDs on the bottom of the 622. Anker also integrated a “power” button, that makes it easy to see how much juice is left in the power bank. And rounding out the bottom, we have a USB-C charging port, which is fantastic considering that Apple’s MagSafe Battery forces you to use Lightning instead. 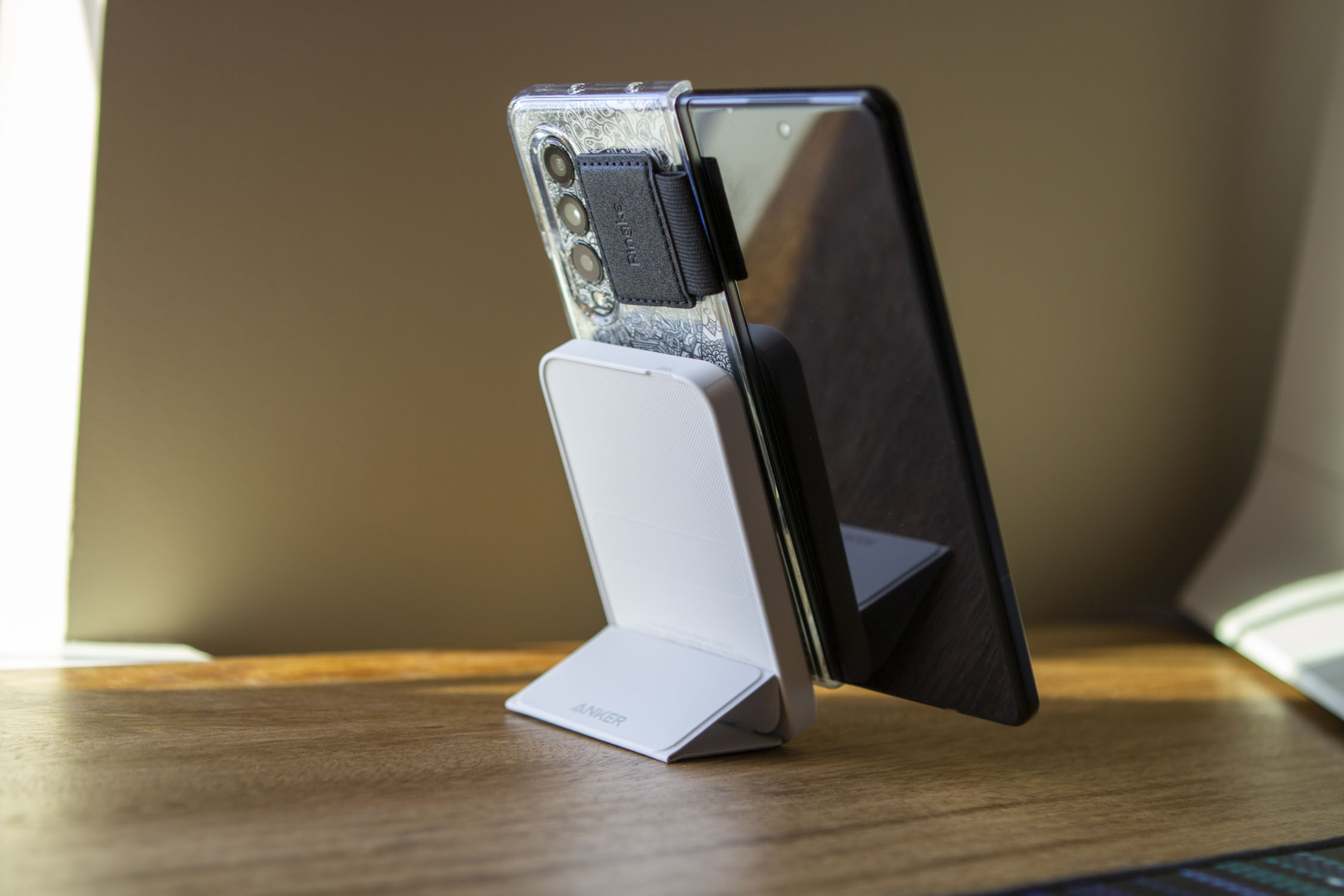 Looking at the design, the front and back feature a soft, matte finish, which is a nice touch (literally and figuratively). On the side you attach to the iPhone, there’s the MagSafe circle with the straight line beneath. On the other side, the Anker branding is slapped in the middle, and there’s a little tab at the top to fold down the charging stand portion.

The Anker MagGo 622 is a wonderful option for those who don’t want to pay “Apple prices” for the OEM MagSafe Battery Pack. It comes in at just $60 and is available in five different colors to choose from. 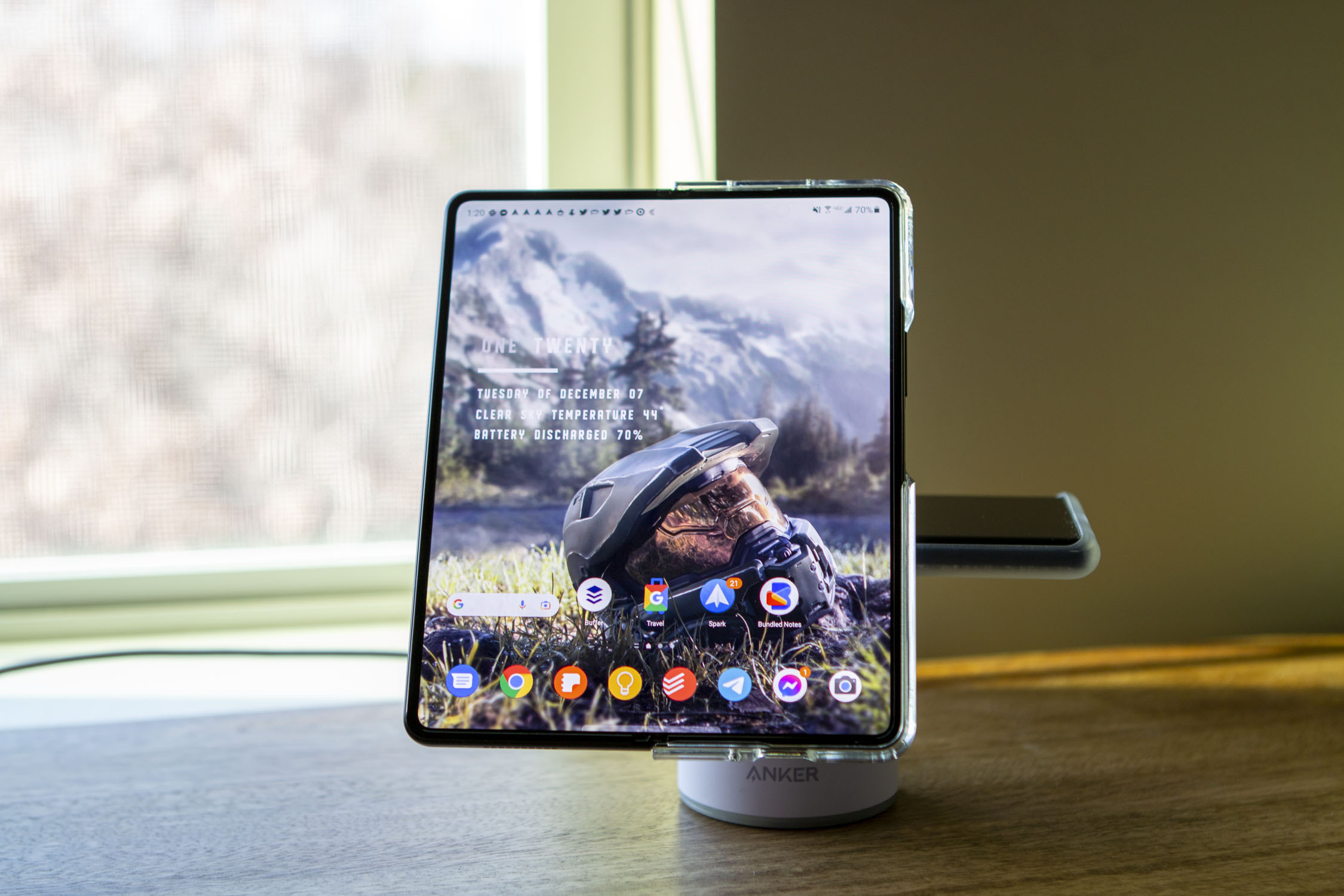 Moving onto something that you might want for a desk or nightstand, the Anker MagGo 623 is another interesting option. Instead of offering two separated charging stands to keep multiple devices juiced up, the Anker 623 takes a different approach.

Taking this out of the box, you’ll get the MagGo 623, USB-C to USB-C charging cable, and an Anker 20W PowerPort III wall plug. This combination provides just enough juice to take advantage of the fast MagSafe charging speeds, while offering a bit of versatility in the process.

The first thing that you might notice is just how compact the MagGo 623 actually is. It’s smaller than a can of your favorite energy drink, but has a few hidden tricks up its sleeve. The first of which is the ability to lift up the top MagSafe “puck” and orient your phone in any way that you want. Having adjustable angles is key, as you’ll want to be able to see what’s going on with your notifications, and if the phone is propped up at the correct angle, Face ID will automatically unlock your phone. 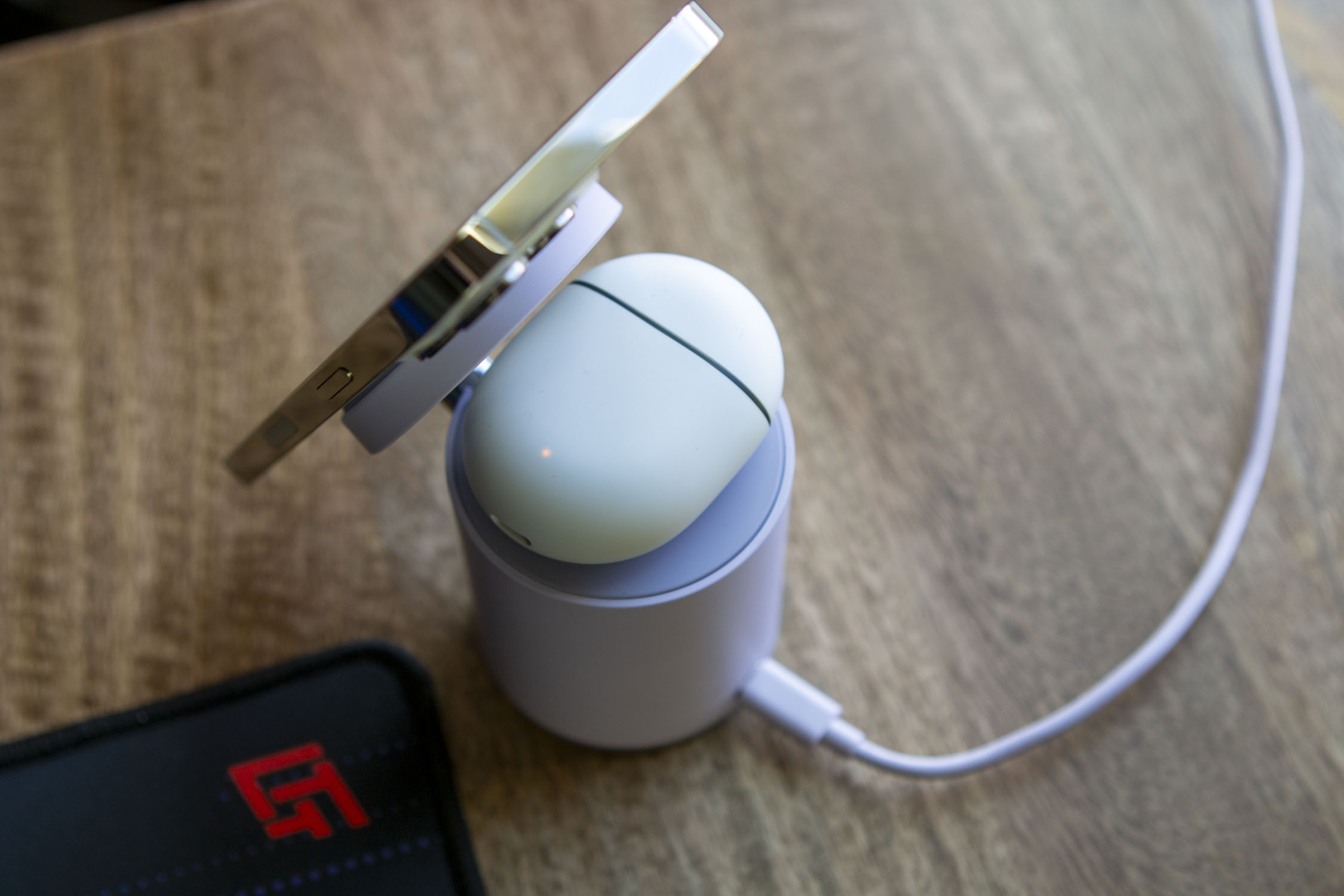 Again, we have a soft matte finish on the top, and your iPhone will snap right into place even if the MagGo 623 isn’t plugged in. But once you plug it in and attach your iPhone, then you’ll see a nice LED ring at the bottom light up. Thankfully, this is something that you could use on the nightstand, as the LED ring turns itself off after just a few seconds.

But Anker has packed one more useful feature into the MagGo 623, and that’s the inclusion of an additional wireless charger. Lift up on the MagSafe puck, and you’ll be able to access and use the secondary wireless charger. Unlike the puck, this is not MagSafe, and provided that you don’t have a behemoth of a phone, you can even use it to charge an iPhone and Android phone at the same time. However, the most common reason to use this is to slap on a pair of AirPods or other Bluetooth headphones along with your iPhone. 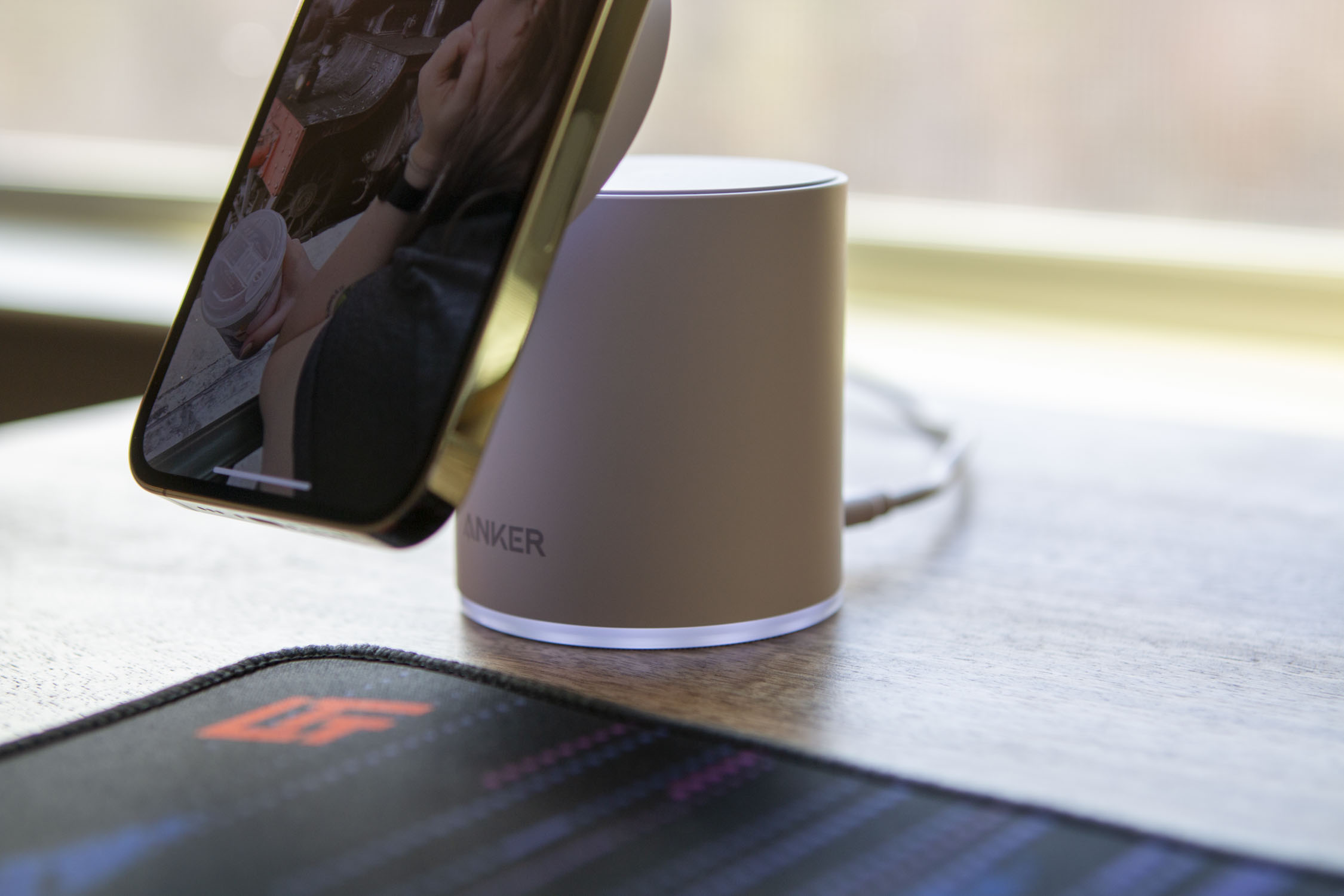 I’m a big fan of MagSafe in general, and now Anker has me re-thinking my everyday carry and my office setup thanks to its new MagGo lineup of accessories. I’m still holding out hope that Samsung will implement something similar into a future Galaxy device, but that’s unlikely to ever become reality. Instead, I’ll just keep using things like Mophie’s Snap+ adapters, Anker’s MagGo 310. These both can make your Android phone MagSafe compatible, and in some instances, you’ll still be able to wirelessly charge them.

The Anker MagGo 623 is normally priced at $80, but for a limited time, you can head over to Amazon and save $10 on the Violet, Misty Blue, or Dolomite White color options.

Anker’s new series of MagSafe accessories are both fun and extremely useful to have on hand. Whether you need a charge while you’re out and about, or want a new MagSafe charger for your nightstand, Anker has you covered.