Moto Edge X30 gets teased again ahead of official launch

Motorola is expected to announce the Moto Edge X30 later this week, as the device aims to arrive as one of the first smartphones powered by Qualcomm’s new Snapdragon 8 Gen 1 flagship processor. Ahead of the announcement, Motorola has been teasing the device, but stopping short of providing any of the fine details.

That’s all beginning to change as two new teaser posts have been shared (via GSMArena), confirming the Edge X30’s 5,000mah battery complete with 68W fast charging speeds. Another teaser poster reveals the camera module, lining up with what we’ve seen in previously-leaked renders. 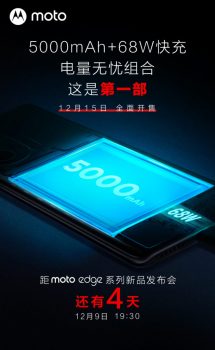 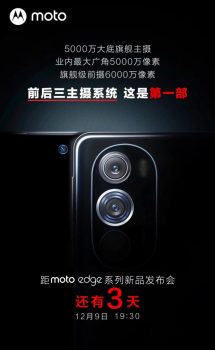 With the triple camera setup, the Moto Edge X30 is equipped with dual 50MP sensors, one for wide-angle shots and the other for ultra-wide pictures. Motorola stops short of revealing what the third lens features, but it’s likely a 2MP depth sensor meant for portrait photos. Meanwhile, the hole-punch selfie camera will sport an impressive 60MP sensor, which would be one of the largest selfie sensors we’ve seen in a phone.

Previous appearances on the likes of Geekbench seem to confirm that Motorola will pair the Snapdragon 8 Gen 1 chipset with at least one configuration with 12GB of RAM. Motorola has already confirmed some of the other specs, as the Edge X30’s display will sport a 144Hz refresh rate along with support for HDR10+ and 10-bit colors.

Other rumors claim that we’ll see configurations including up to 16GB of RAM and 512GB of storage. The Edge X30 is said to launch running Android 11, along with a side-mounted fingerprint scanner. Unfortunately, we don’t know where Android 12 rests in Motorola’s future plans for its devices.

Finally, the Moto Edge X30 is expected to launch in China on December 15th, following the announcement later this week. As for global availability, we could see the Edge X30 rebranded as the Motorola Edge 30 Ultra and launch sometime in early 2022.