With the Summer of 2021 in the rear view mirror, we’ve reached that time of the year where you and some friends might want to get together to roast some marshmallows and just enjoy the wonders of Fall. And while it’s great to huddle around a fire and reminisce, it’s even better to be able to throw on a movie or the game at the same time. That’s where a projector like the XGimi MoGo Pro will come in, as this little projector weighs in at less than 2 pounds, but is the perfect companion for any movie night.

Admittedly, I have not used a projector since I was in High School (over 10 years ago), so it was an interesting idea to use one that fits in the palm of your hand. For quite awhile, I just assumed that projectors were cool toys that weren’t really a necessity. But after spending some time with the MoGo Pro, my mind has definitely been changed for good. 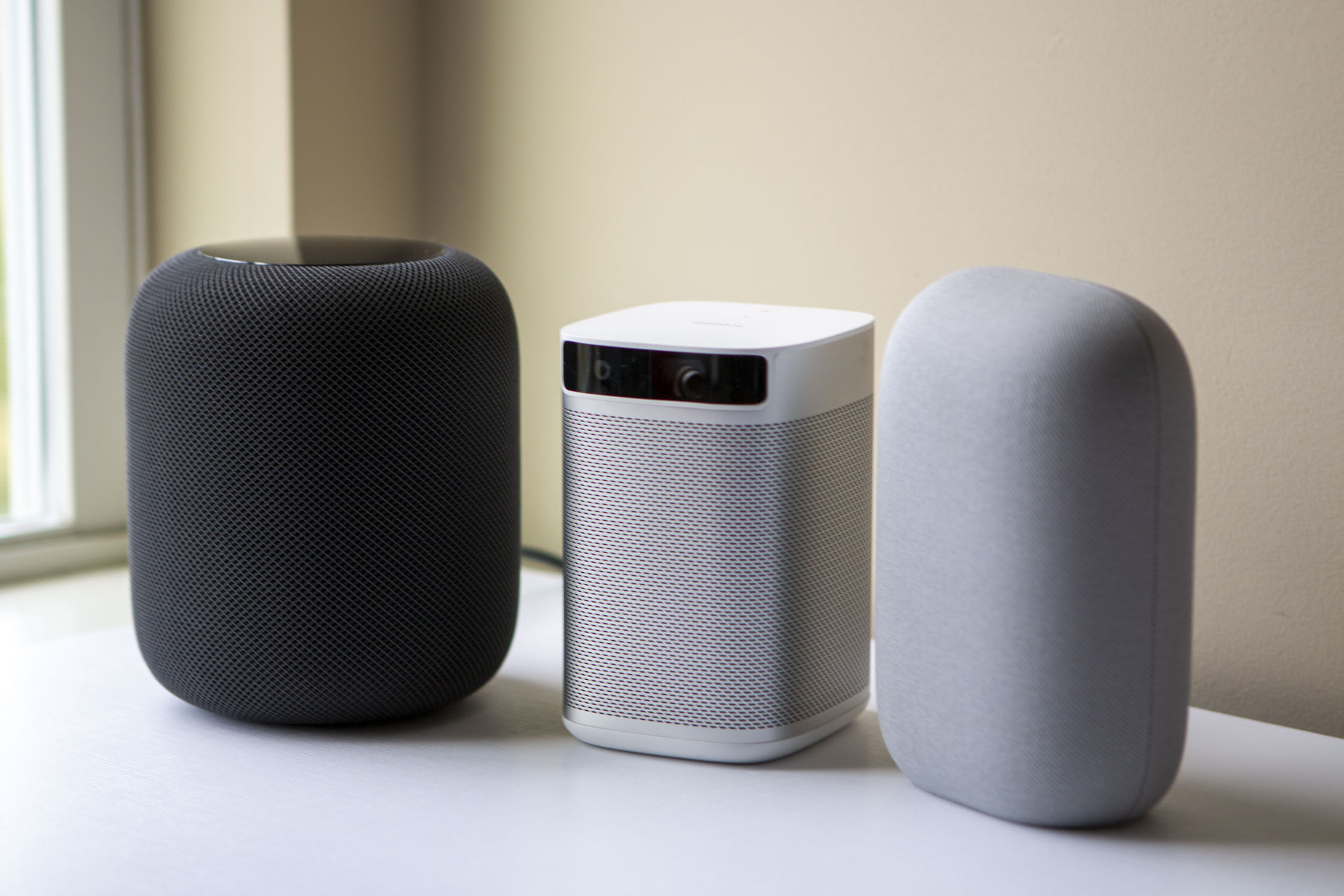 Considering that my idea of a projector were the ones that we used in school, I really was not expecting to unbox the MoGo Pro and see something so small and lightweight. In the box, you get the MoGo Pro itself, along with a DC power cable, power adapter, remote control, and the usual paperwork found in pretty much everything.

Truthfully, I couldn’t help but just look at the MoGo Pro for a little bit, as it’s shorter than my Nest Audio and has a smaller footprint compared to my HomePod. I thought, there’s no way that this can provide a great experience, with built-in speakers, while being able to do what XGimi claims it can do. Notably, provide up to a 100-inch screen, provided that you have the space to use it at that size. 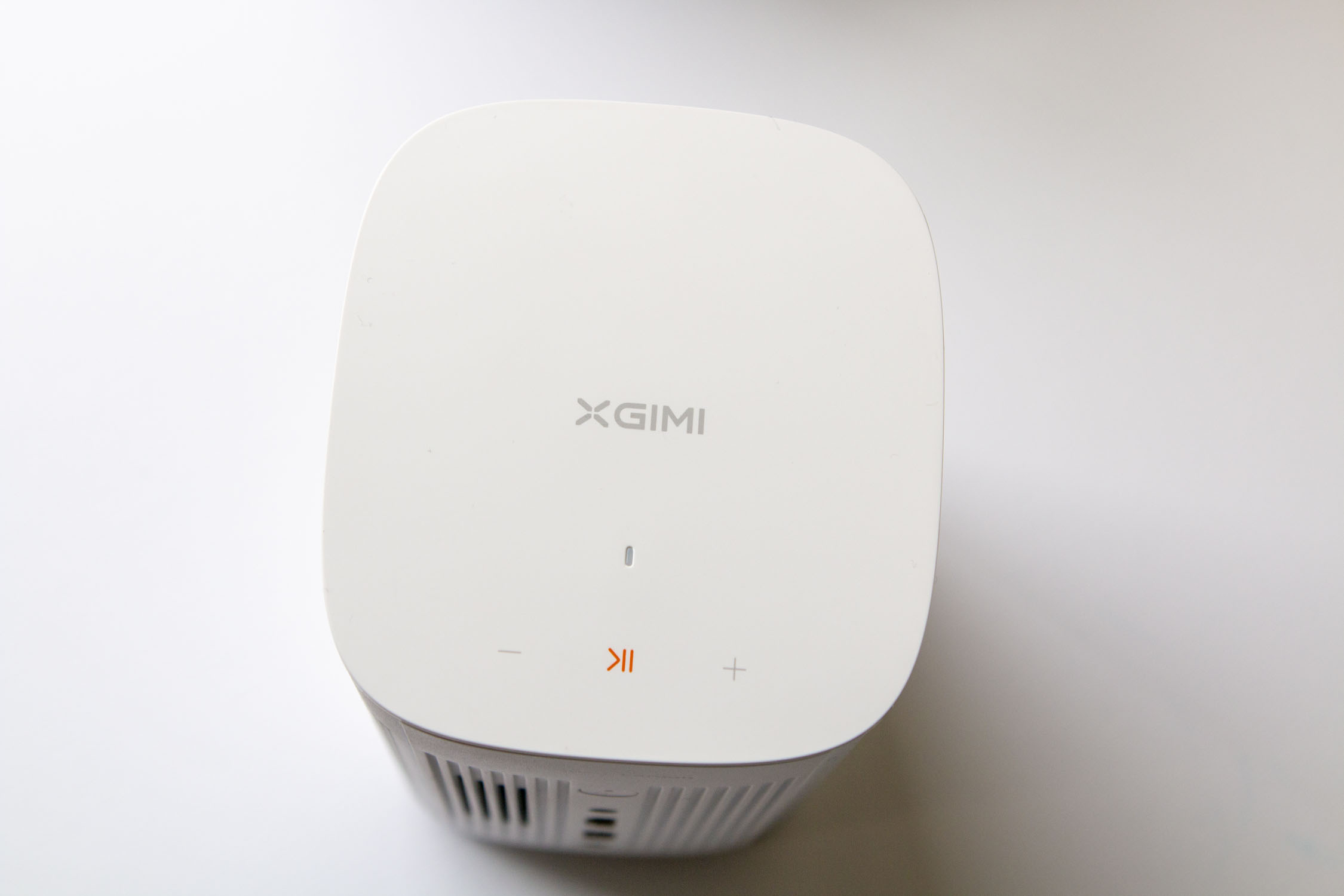 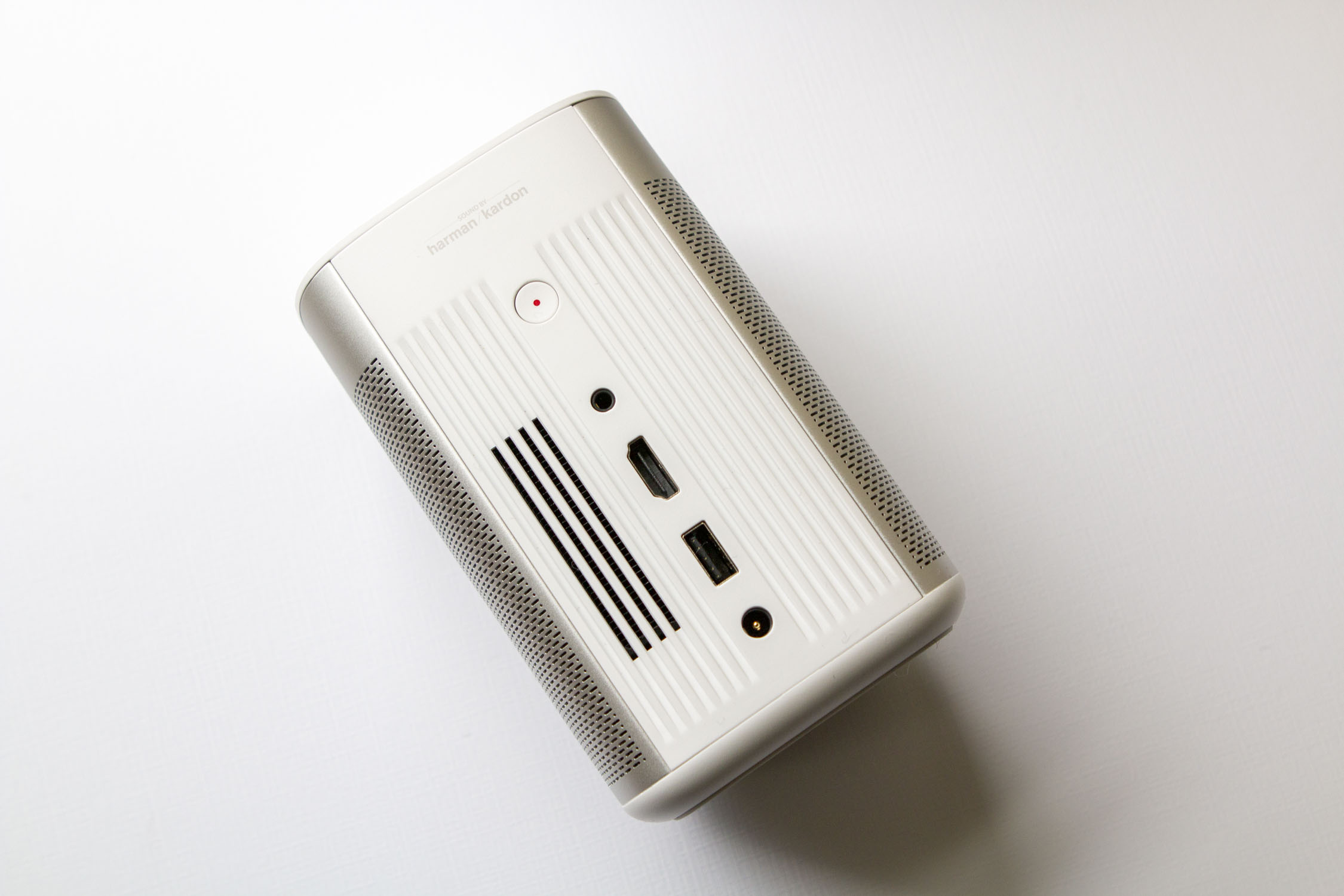 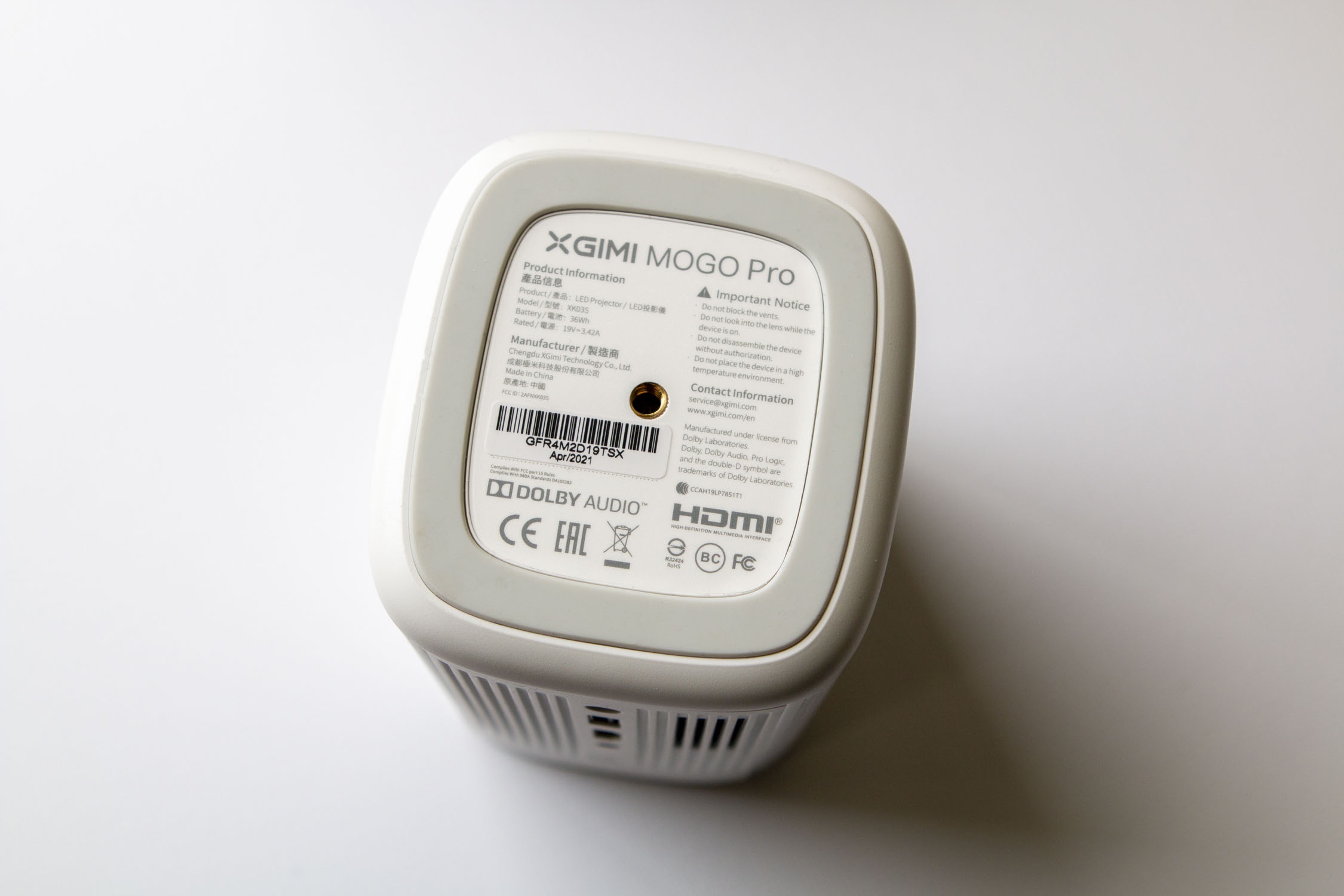 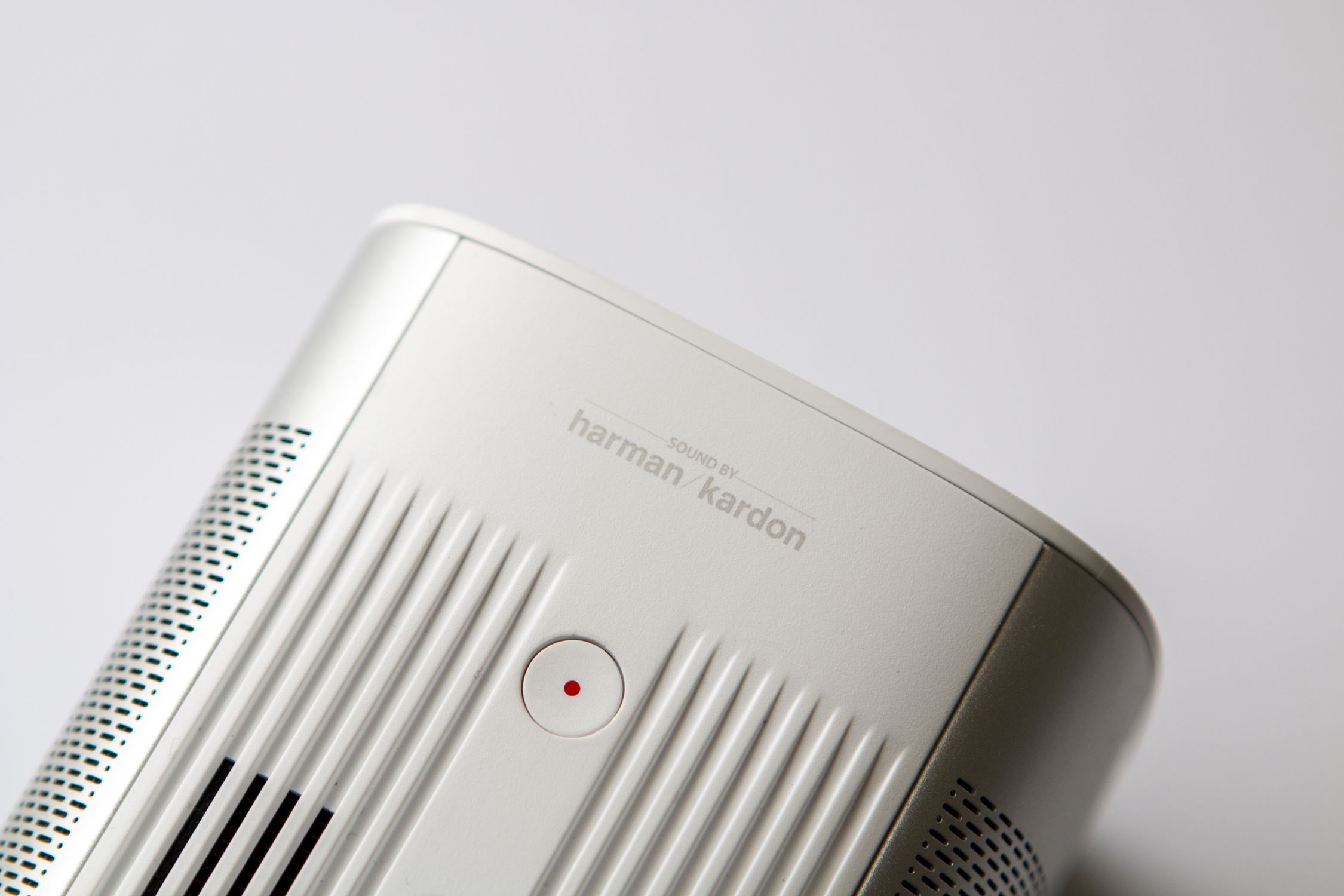 Looking around the MoGo Pro, we have touch-sensitive media controls on the top, along with a status LED and some XGimi branding. Moving to the back, the power button is at the top, followed by the 3.5mm headphone jack, HDMI port, USB-A port, and power. There are dual 3W Harman Kardon-tuned speakers, so you’ll want to be careful just grabbing the projector by the sides, as it will flex a bit. On the bottom, there is a rubber base to help keep your projector in place on a table or surface, but there’s also a tripod screw if that’s something that you want to mess around with.

The remote is really nothing to write home about. It’s made from plastic, and is really light, making me and my over-sized hands feel like I’m going to break it if I press the buttons too hard. This isn’t going to be a problem for many, but it’s just something worth pointing out. On the remote itself, we have all of your traditional controls, including a dedicated Google Assistant button placed above the navigation pad. 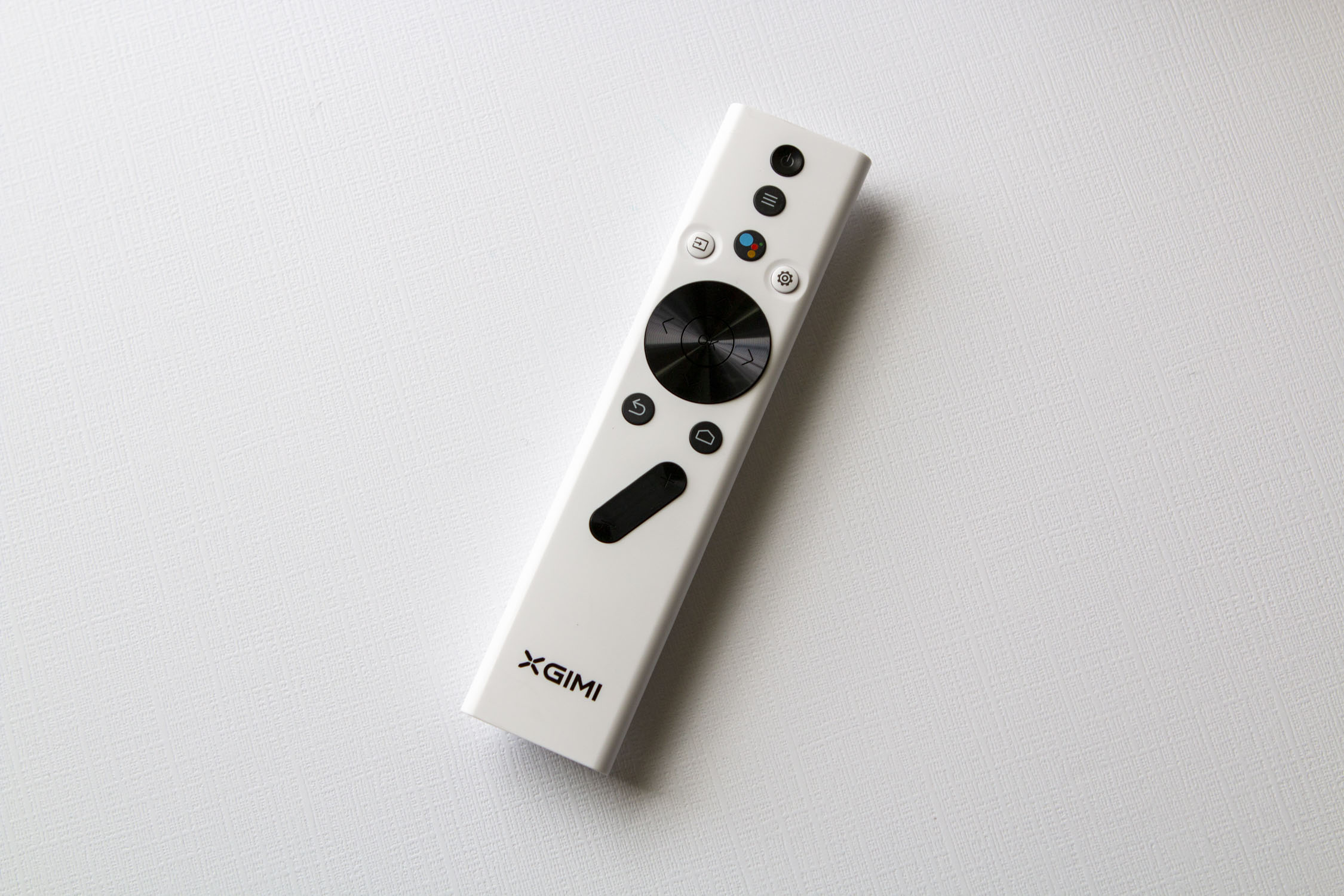 Setting things up was a pretty easy process, for the most part. For some reason, XGimi doesn’t include batteries for the remote in the box, so you’ll have to provide your own. But this is also where I was met with my first source of frustration. The pairing process between the included remote and the MoGo Pro took me about 20 minutes. There’s a button combination that needs to be pressed to put the remote and then you have to wait for the MoGo Pro to pick it up. In order to get things working properly, I had to move the MoGo Pro out of my office and into a larger room, likely because of interference from the endless amount of gadgets in my office.

XGIMI MoGo Pro Review: Putting it to use 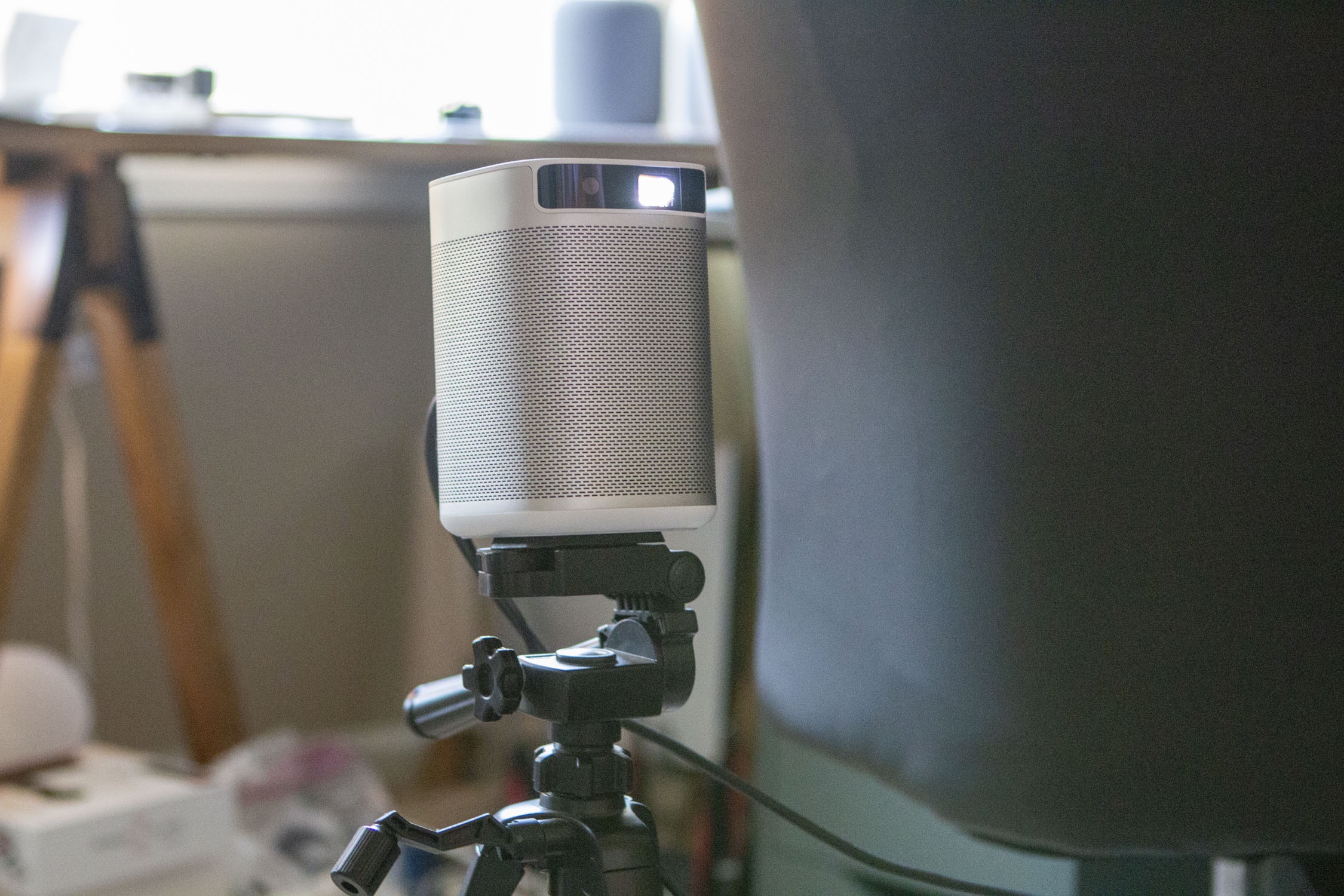 As someone who spends their downtime playing some Xbox, the first thing that came to mind wasn’t to check out the Android TV experience. But let’s touch on that real quick. The MoGo Pro runs Android TV 9.0, and we aren’t 100% sure when the company plans on updating it to something newer. It works just fine, and is no different from what you’ll find on televisions powered by Android TV.

Back to the Xbox. It definitely takes some finagling to get line up the picture just right. Maybe this had more to do with my inexperience using projectors, but you’ll definitely need to move it around in order to fill whatever wall that you are throwing the picture up on. Of course, playing games on the Xbox is as simple as plugging everything in and connecting the Xbox via an HDMI cable. Once that’s done, you can just sit back and relax.

When it comes to picture quality, I knew this wasn’t going to match up with my 75-inch 4K Hisense TV, or even my dual monitor setup in my office. The MoGo Pro offers 1080p native resolution, but the biggest qualm that I have is that you’ll definitely want to make the room or area as dark as possible. XGimi claims the projector provides up to 300 lumens of brightness, but it’s definitely something that you can comfortably use with the blinds open or outside during the day. 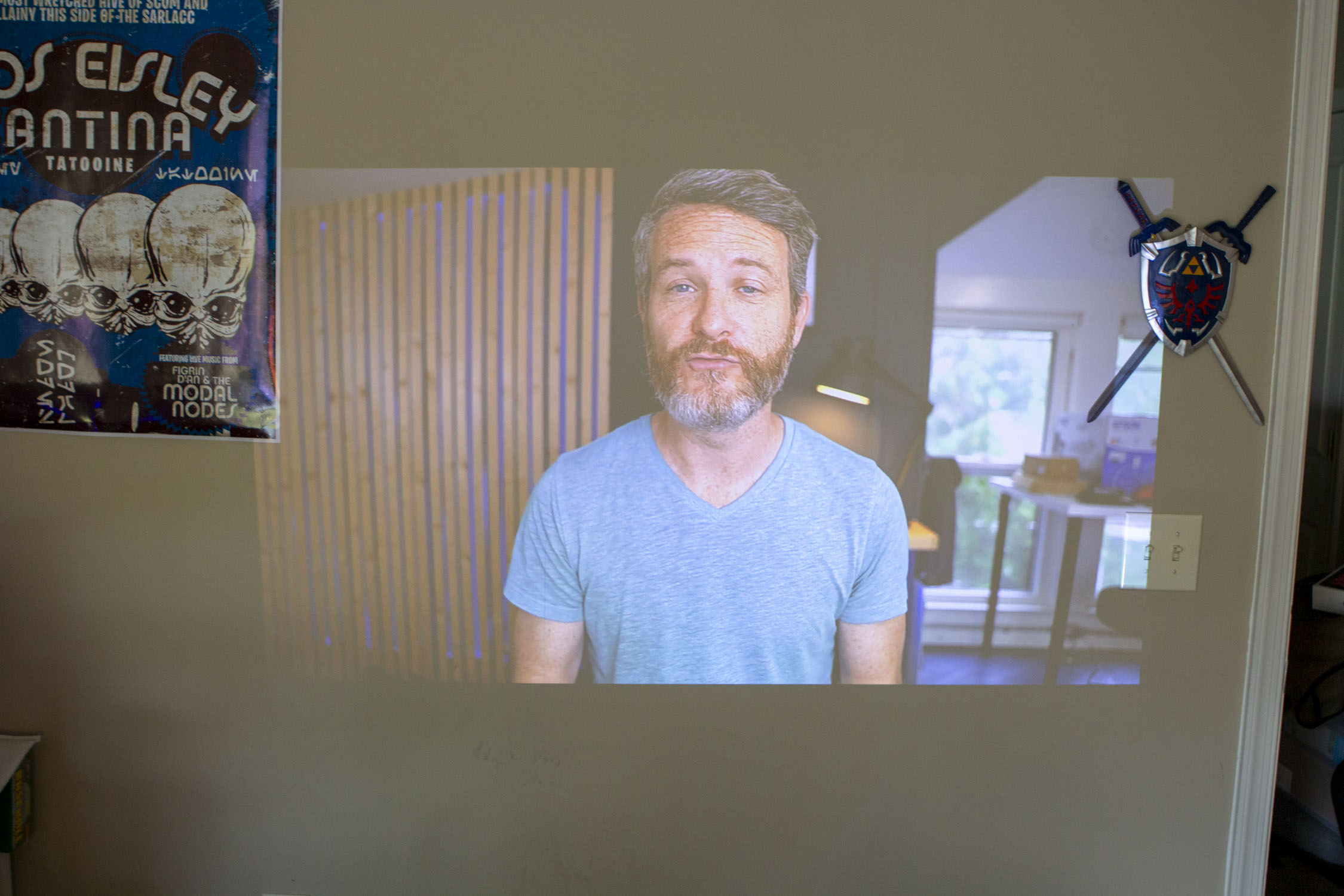 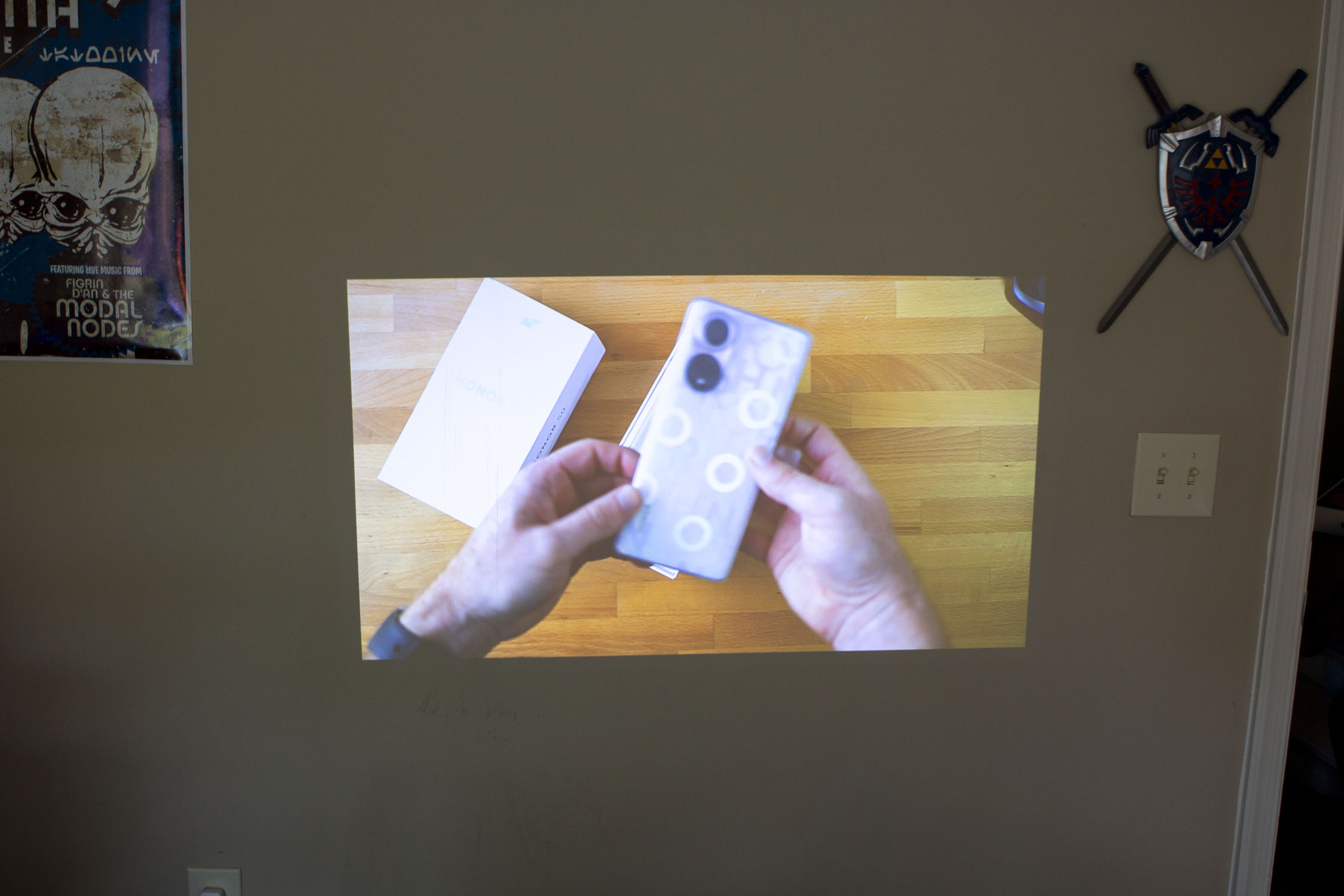 Hopefully, we’ll get to a point where these portable projectors can actually replace our televisions without breaking the bank, but the MoGo Pro isn’t the one for that. One good thing, though, is that the closer the projector gets to the wall, the brighter the picture is. So if you wanted to try and test the 100-inch projection, you might come away a bit disappointed.

Overall, throwing on some YouTube videos and playing Madden on my Series X was an enjoyable experience. This is really a unique device, and one that can even be used without needing to be plugged in. Oh that’s right! You can actually use the MoGo Pro without a power source thanks to the built-in battery. XGimi claims this projector will last between two to four hours, and that’s right around what we found in our testing. It’ll last long enough for a good movie, provided that you aren’t watching one from Quentin Tarantino or you’ll end up needing to grab the power cable.

XGIMI MoGo Pro Review: Should you buy one? 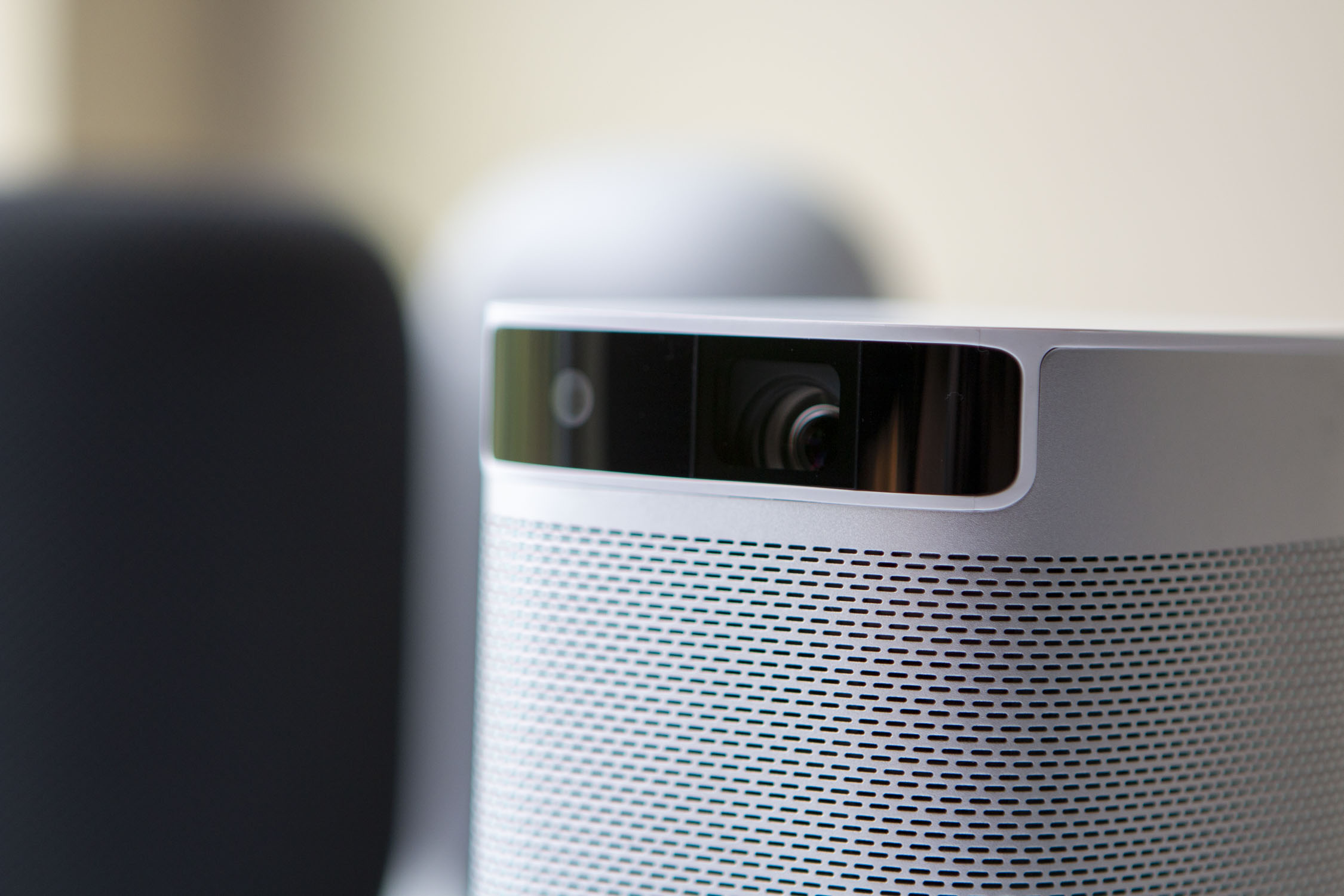 The XGimi MoGo Pro has changed my thoughts about projectors, and while I’m not going to go out and grab a bunch of them to test them out, the MoGo Pro will definitely continue to be used. It’s something I can just throw in my bag and take with me over to a friends house for movie night, or if we want to play some games on a much-bigger screen than what can be found in their home.

Answering the question of whether you should buy one, it’s tough to say. The retail price of the MoGo Pro comes in at $600, but XGimi regularly drops the price down to around the $500 mark. The lowest we’ve ever seen it was around $415 back in 2020, and the closest it’s gotten since then is around $440 earlier this year. Compared to other highly-rated projectors, such as Anker’s Nebula series, it matches up pretty well, so it will just depend on whether you want to try something from XGimi or if you would rather go with Anker’s offering.

All-in-all I had a good experience with the MoGo Pro, and have thoroughly enjoyed messing around with this projector in my time with it. If you’re looking for a small and lightweight projector and this one’s been on your radar, I’d definitely say go for it and you won’t be disappointed.

The XGIMI MoGo Pro is a pretty awesome portable projector that is perfect for the outdoors or if you just want to connect your console to it. We don’t recommend trying to max out the projection, but you’ll be just fine otherwise.