Going into today’s Galaxy Unpacked event, we pretty much already knew everything that Samsung was going to show off to the world. What we didn’t expect was that the event was going to be wrapped up in just about an hour. Samsung unveiled a total of five new devices, headlined by the two new entries to the Galaxy Z lineup. So without further adieu, here’s everything that Samsung announced today. 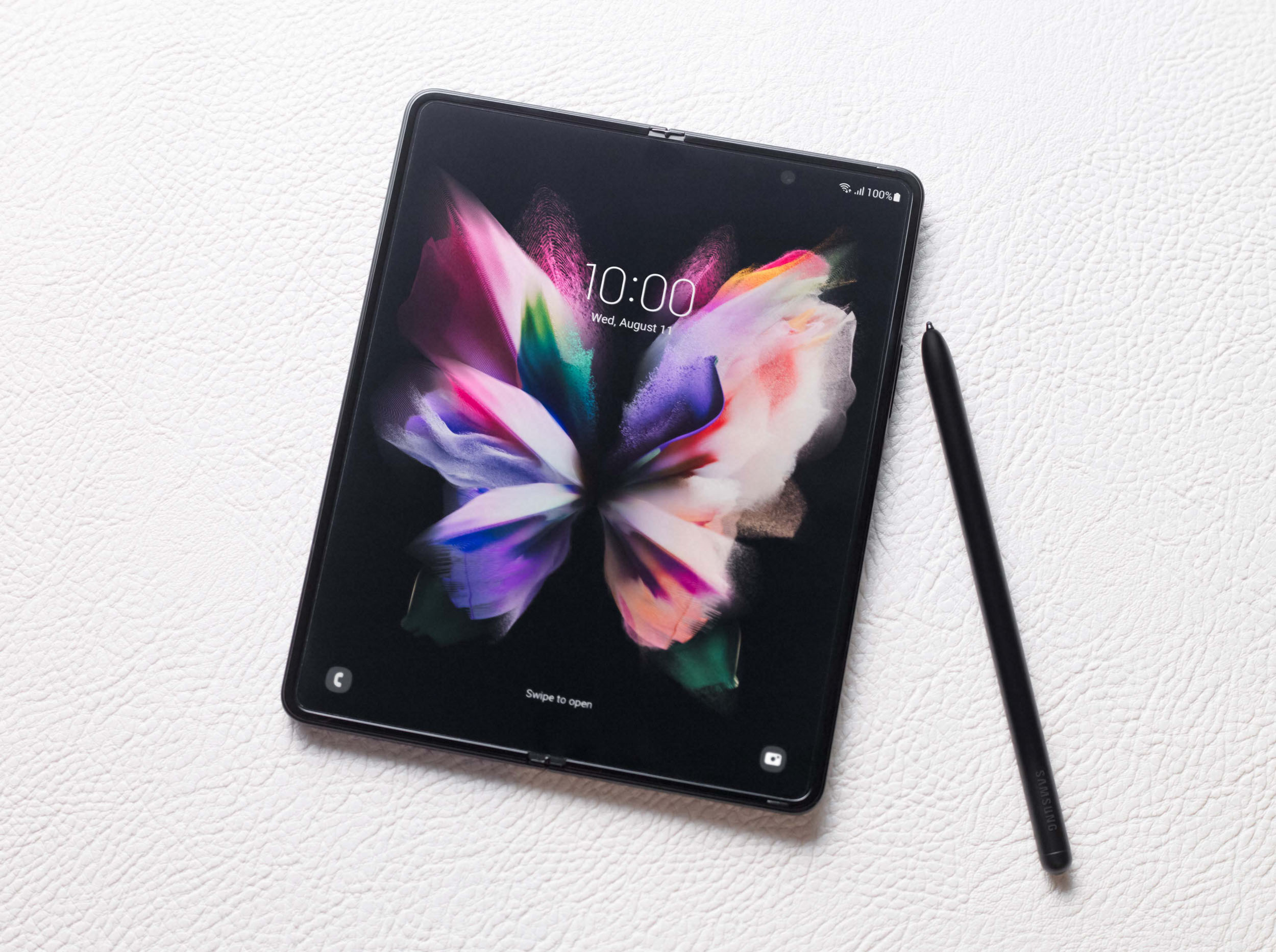 The Galaxy Z Fold 3 was the star of the show, as Samsung made plenty of improvements to turn help take foldable phones into the mainstream. The device sports a 7.6-inch main display that has been improved greatly and is said to be 80% more durable than last year’s Galaxy Z Fold 2. With this new display technology, Samsung was able to make this the latest phone to be compatible with the S Pen. Along with that, the S Pen Fold Edition and S Pen Pro were announced (or re-announced), giving you two options if you want to use a stylus with this foldable phone.

Under the hood, we have the usual suspects, with the Snapdragon 888 providing the juice along with 8GB or RAM and either 256GB or 512GB of non-expandable storage. The rear camera system remains largely unchanged compared to last year, with a triple 12MP array consisting of a wide, ultra wide, and telephoto lens. In terms of the dual selfie cameras, there’s a new 4MP Under Display Camera (UDC) found on the main screen, along with a 10MP traditional selfie camera on the Cover Screen. That Cover Screen has also been slightly improved, as it now features a 120Hz Adaptive refresh rate, matching the inner display.

Going back to durability, the Galaxy Z Fold 3 is the one of the first folding smartphones to offer any type of water resistance thanks to its IPX8 rating. Samsung also made a few tweaks to the software with an improved App Pair and Multi-Active Window experience. Samsung also announced a new Taskbar feature that makes it easier to switch between apps, but is only available via the Galaxy Labs app on the Z Fold 3. 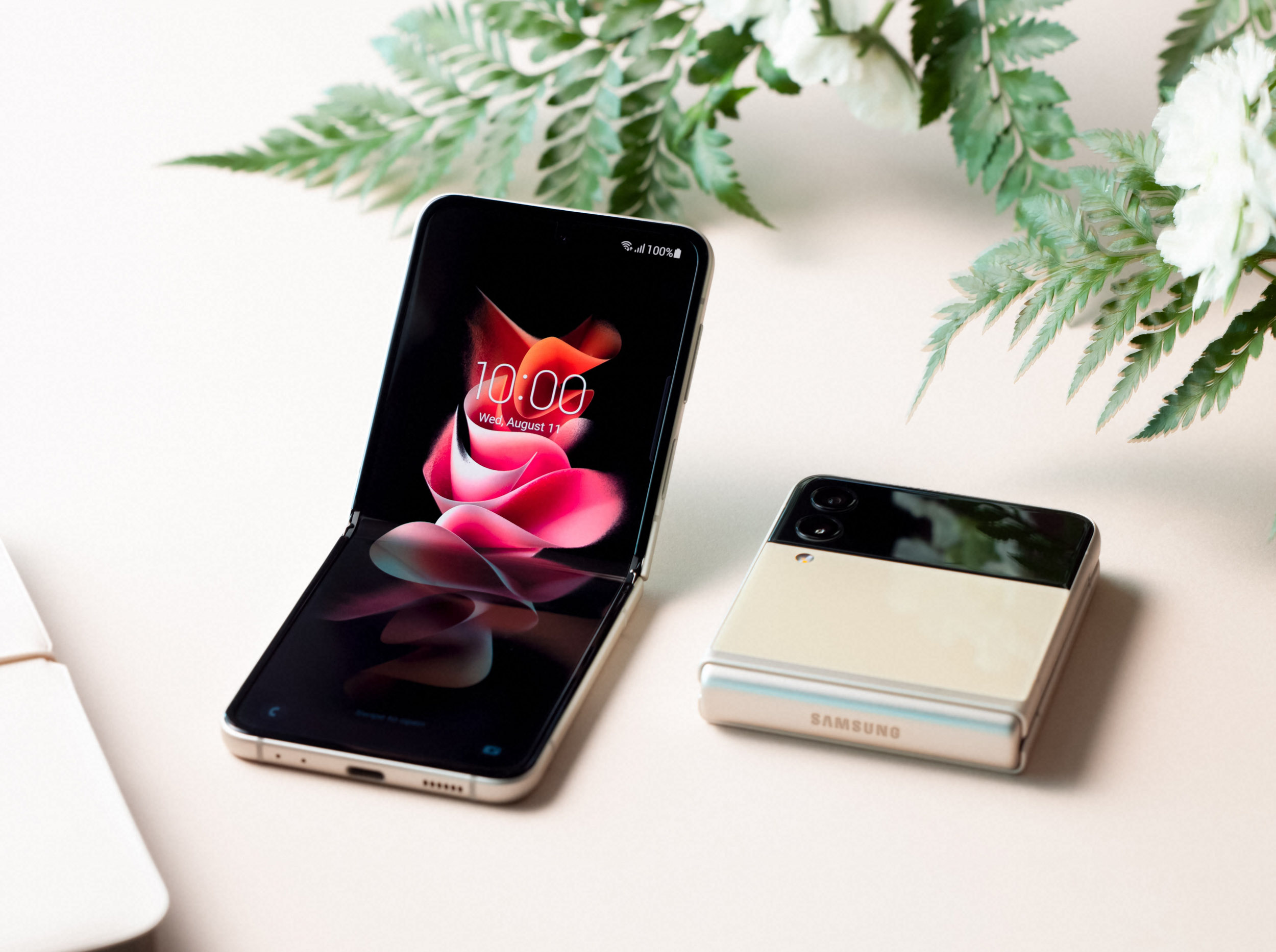 Next up we have the new Galaxy Z Flip 3, which might just be the most intriguing device of the year, at least for those of us here in the States. The phone largely remains unchanged compared to last year’s model, with a few key differences. It sports a 6.7-inch Dynamic AMOLED display with a 120Hz refresh rate. But on the outside, Samsung redesigned the camera and cover screen area, hiding both within a slab of glass that stretches the width of the device. This Cover Screen sees an increase in size up to 1.9-inches and makes it easy to not only view your messages, but it also offers a better camera viewfinder and can be used with Samsung Pay without needing to un-flip your phone.

Again, we see the Snapdragon 888 chipset at the helm, paired with 8GB of RAM and either 128GB or 256GB of non-expandable storage. There’s a 10MP selfie camera on the inner display, along with a dual 12MP camera system that has been changed to a vertical orientation. With these cameras, you’ll have the option of either using the 12MP wide-angle camera which acts as the main camera, or a 12MP ultra wide lens. Battery life matches up with the Galaxy Z Flip 5G, coming in at 3,300mAh. And Samsung included its 25W wired fast charging, 15W wireless fast charging, and 4.5W reverse wireless charging.

Just like the Galaxy Z Fold 3, the Z Flip 3 also sees a fantastic upgrade in terms of durability. Using the same type of screen, we see an 80% increase in durability, along with the IPX8 water resistance rating making the Z Flip 3 the second (or also first?) foldable phone released with this rating. There are a slew of different colors to choose from, with Cream, Green, Lavender, and Phantom Black being made available everywhere. However, the Gray, White, and. Pink models are exclusive to Samsung.com.

The pricing of the Galaxy Z Flip 3 is the most exciting aspect, as this marks the first foldable phone to be released with a sub-$1,000 price tag. Coming in at $999 for the 128GB model or $1,049 for 256GB of storage, Samsung is positioning this as the folding phone for everyone. Like the Z Fold 3, the Flip 3 is available for pre-order starting today, and will be available everywhere starting August 27th. 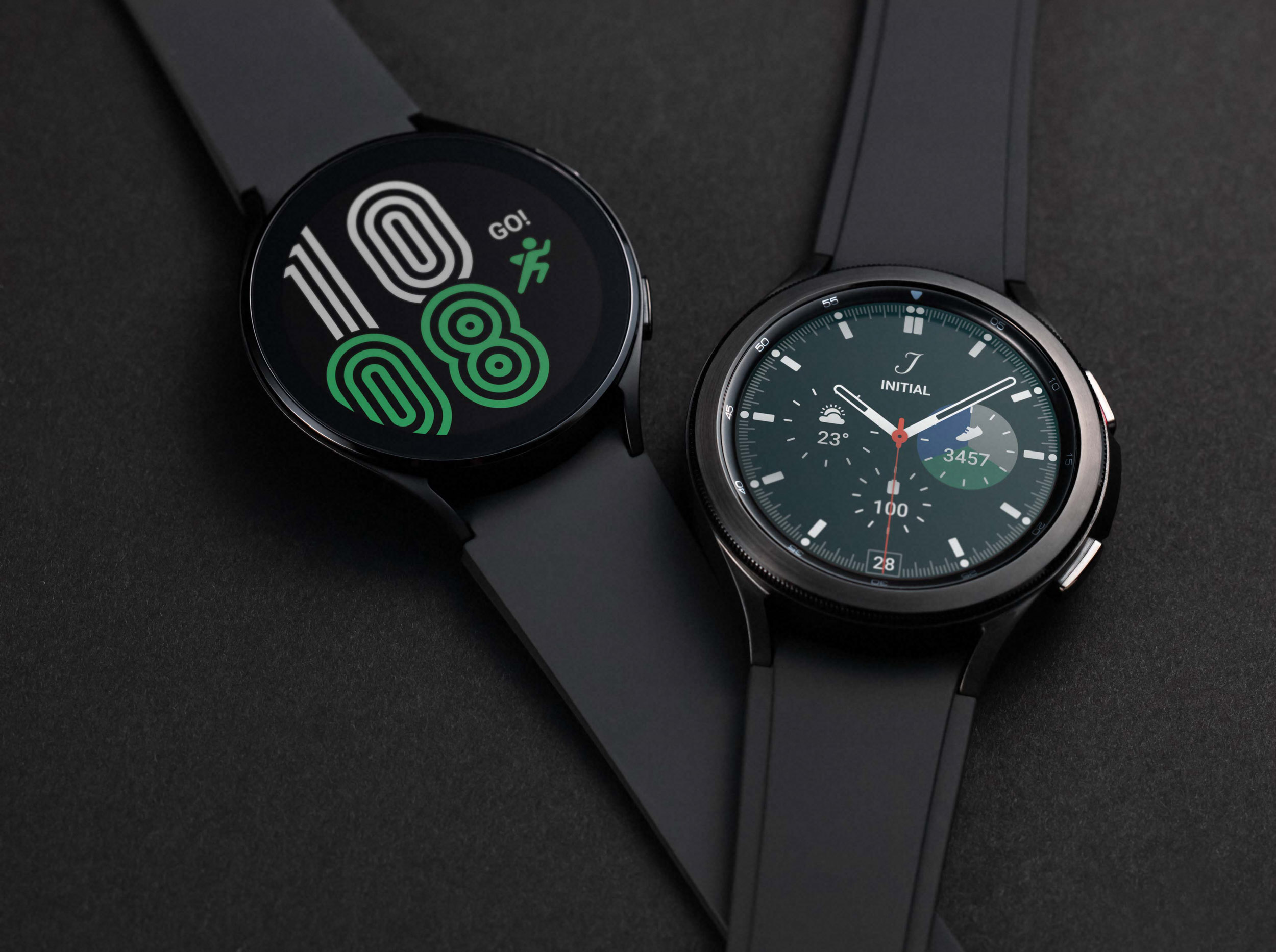 The Galaxy Watch 4 series has been teased by both Samsung and Google for months now, and they are finally here. Samsung is moving away from its “Active” line of smartwatches, replacing it with the extremely-affordable Galaxy Watch 4. This smartwatch comes in either 40mm or 44mm case sizes, while sporting a 1.2-inch or 1.4-inch display based on the case sizing. Battery life should be pretty solid thanks to the 247mAh cell, along with ability to get 10 hours of extra battery when charging for just 30 minutes.

These same numbers apply to the Galaxy Watch 4 Classic, as it is available in either 42mm or 46mm case sizes. You’ll find the same 1.2-inch or 1.4-inch display based on what case size you end up with. However the battery life has been increased to take advantage of the larger design, coming in with a 361mAh battery. Both the Galaxy Watch 4 and Watch 4 Classic share the same Exynos W920 chipset, along with 1.5GB of RAM, 16GB of storage, and 5ATM + IP68 water and dust resistance. Additionally, there are a slew of health sensors built in, including Samsung’s new BioActive sensor which combines optical and electrical heart rate monitoring along with Bioelectrical Impedance Analysis into a single sensor. With this combination, you’ll be able to measure your blood oxygen levels, blood pressure, and even body composition from your wrist.

There are varying colors available depending on which size and version of the Galaxy Watch 4 you decide to go with you. For example, the 40mm Galaxy Watch 4 offers a Pink Gold color, but that is replaced with a simple Green color on the 44mm version. Meanwhile the Watch 4 Classic is only available in either Black or Silver, but includes the oh-so-useful rotating bezel. Finally, both version of the Watch 4 are available in with either Bluetooth or LTE for those who want to get cellular service on their smartwatch. 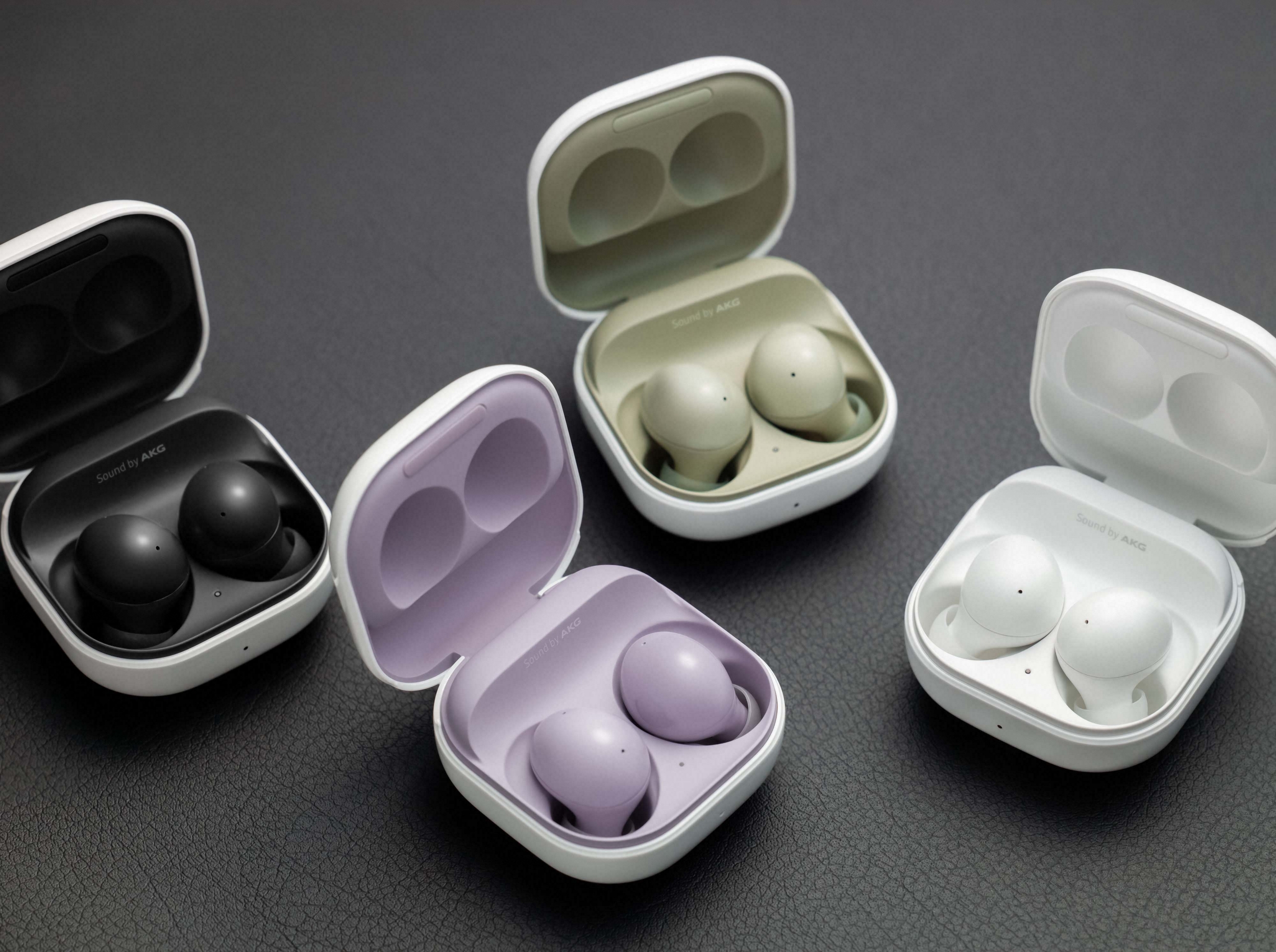 Rounding out today’s announcement was a new set of headphones with the Samsung Galaxy Buds 2. These come in right below the Galaxy Buds Live, and are $50 cheaper than the Galaxy Buds Pro from earlier in the year. It remains to be seen whether the Galaxy Buds+ will stick around, but it wouldn’t come as any surprise if Samsung simply permanently discounted those to just $99 for the sake of having options. Nevertheless, the Galaxy Buds 2 offer both ANC and Natural Ambient Sound modes. This is made possible thanks to the dynamic two-ways speakers, along with the three microphone array with a Voice Pickup Unit.

The Galaxy Buds 2 are available for pre-order starting today and are priced at $149. These new earbuds come in four different colors — Graphite, White, Olive, and Lavender — and will be released on August 27th.