As we’ve recounted numerous times, the Android tablet market is pretty much a wasteland of middling options. There are a few exceptions, namely the Galaxy Tab series and Amazon’s lineup of Fire Tablets. Needless to say, when Amazon came out earlier this year with the updated Fire HD 10 lineup, we were just a little bit excited. 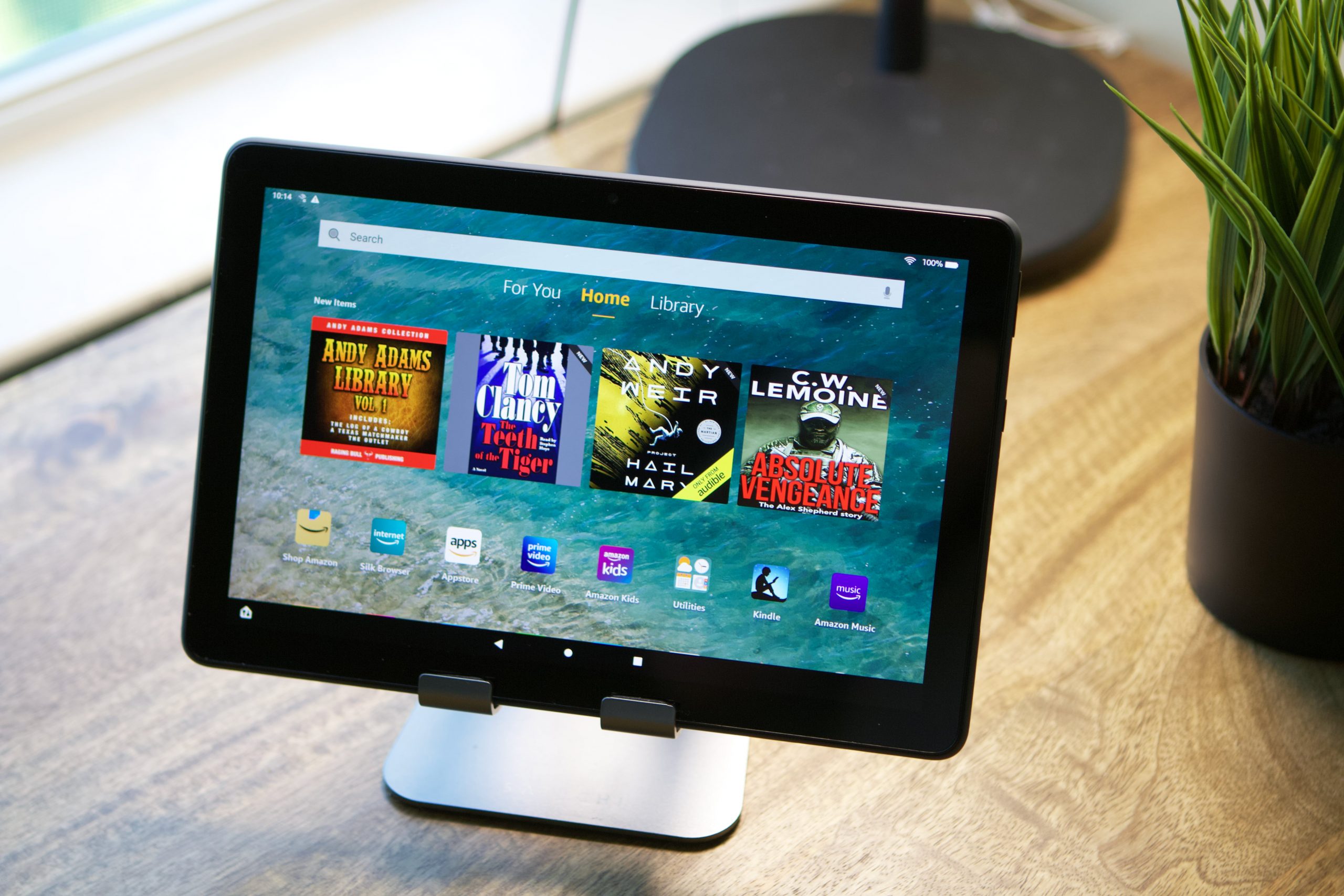 For the most part, you won’t really be able to notice any differences between the Fire HD 10 Plus and the last-generation Fire HD 10. That’s because the display is exactly the same, including the same 1920 x 1080 resolution. You won’t find any faster refresh rates or a UHD display, but that’s not the point here. Instead, Amazon is keeping its focus on affordable tablets for everyone, while giving Amazon subscribers access to their favorite content.

The biggest difference with the HD 10 Plus is the Slate color option, which is the only color you can get. But the Fire HD 10 comes in four different colors, so if you want some spice in your life, you’re better off going with the standard Fire HD 10. The matte finish on the tablet makes it soft to the touch, and paired with the rounded edges, the Fire HD 10 Plus is extremely comfortable to hold.

In its natural orientation (landscape), you’ll find the webcam embedded in the “top” bezel, which continues to be something iPad Pro fans are waiting for. On the right side, you have the volume up and down buttons, along with the power button, USB-C port, and 3.5mm headphone jack.

Admittedly, there’s a lot going on with having everything on one side, but it’s not anything that you can’t get used to. Plus, it’s not like you’ll have to worry about trying to find exactly where to plug in the USB-C cable and the headphone jack is a nice touch. 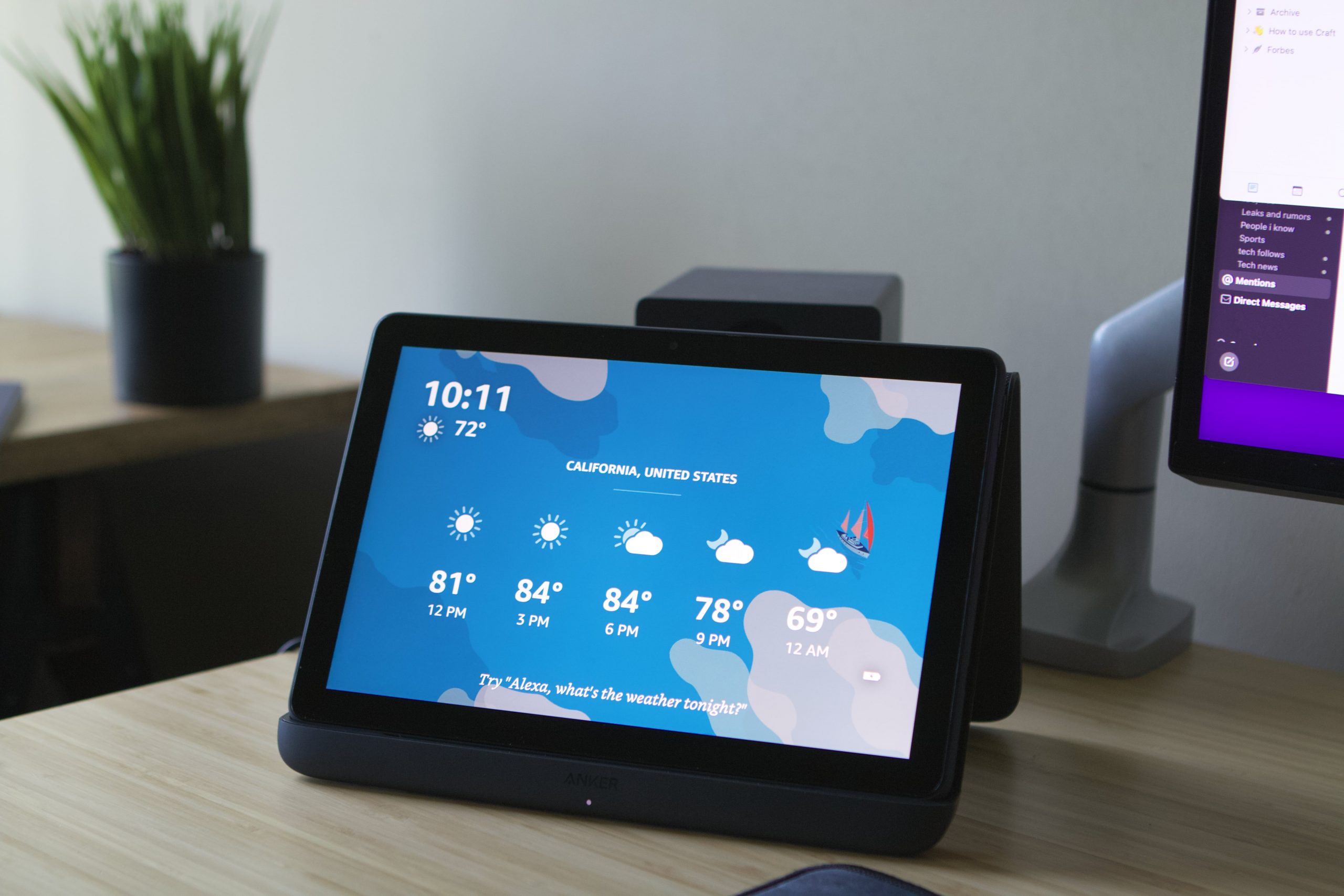 Amazon isn’t trying to re-invent the wheel here with the Fire HD 10 Plus. It’s taking the largest tablet in the lineup, keeping the same coat of paint, but upgrading the engine. All the while, throwing in a few perks, for those who like having options.

There’s a catch when it comes to the “improved” specs with the Fire HD 10 Plus. You’ll get a bump up to 4GB of RAM, which is more than the standard Fire HD 10’s 3GB. This tablet also offers either 32GB or 64GB of expandable storage, and that microSD card slot will definitely come in handy if you want to load this up with movies and TV shows.

In day-to-day use, the Fire HD 10 Plus will be able to handle just about everything that you throw at it. And that includes sitting down to respond to some emails (more on that later), along with playing some of the best games from the Amazon App Store. Just don’t expect it to be able to withstand the rigors of heavy photo editing, or high-end games like Genshin Impact. 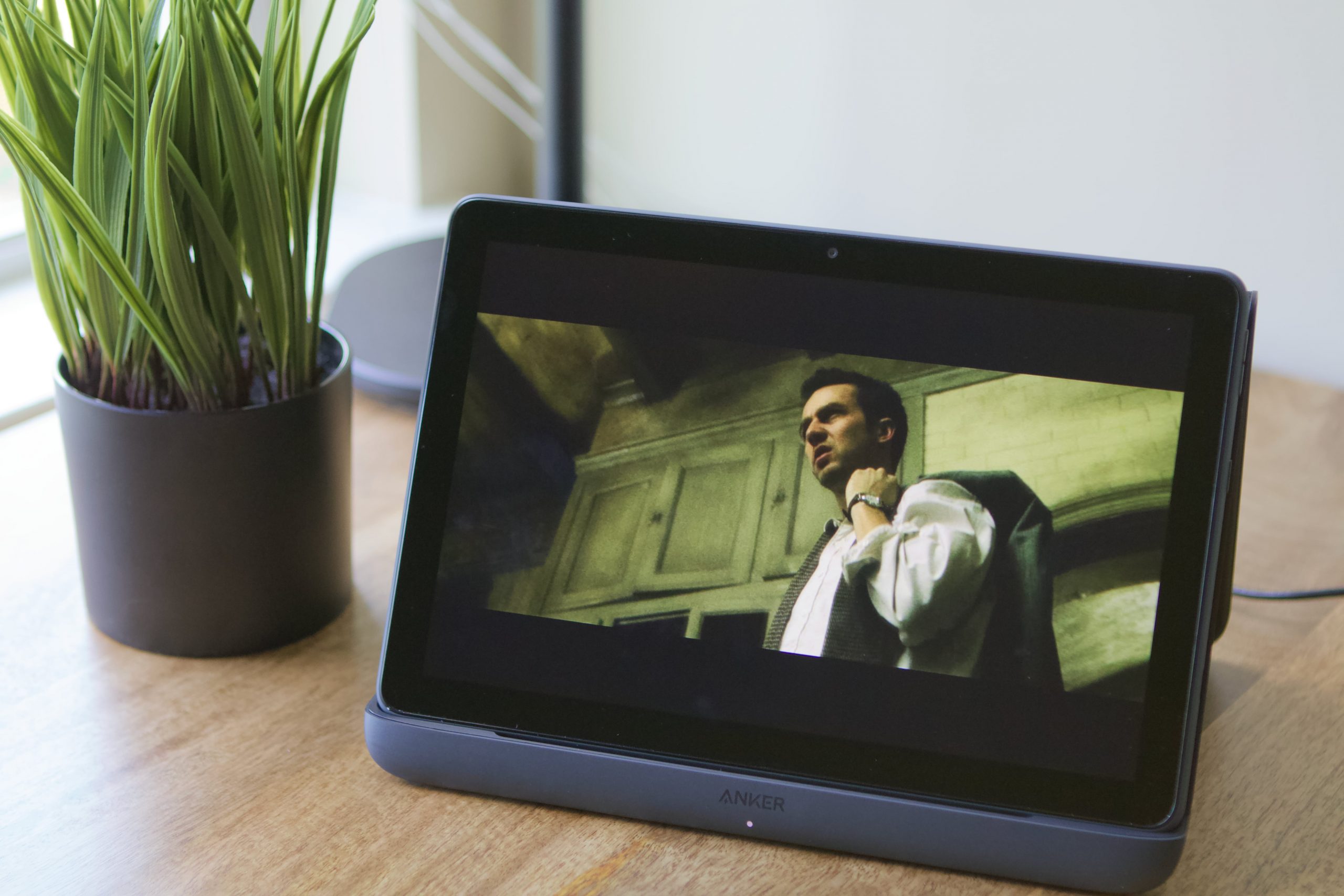 Kicking off the story of compromises, Amazon may not have upgraded the processor this go-’round, but it makes up for it with some nifty features. The first of which is a wireless charger, along with a wireless charging stand that is made by Anker. It’s not super-fast wireless charging, but when docked, your Fire HD 10 Plus will be transformed into an Echo Show of sorts.

Show Mode is activated immediately, providing you with the same interface that you’ll find on an Echo Show. This can be turned off in the notification shade, but if you want to throw your tablet on a wireless charger and turn it into a digital picture frame, this is fantastic.

Pair it with a keyboard 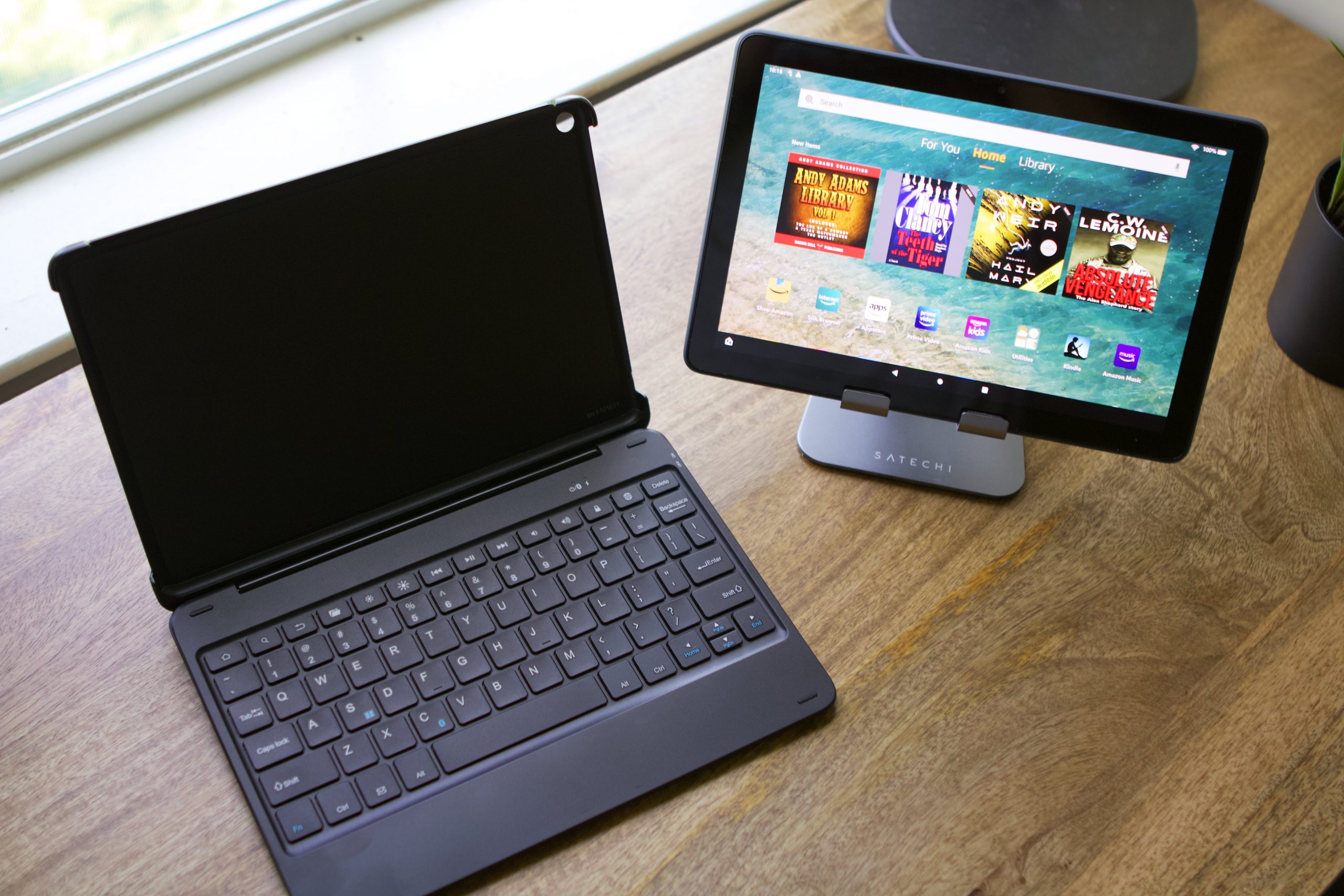 ith the unit that I received, not only have I been using the wireless charger, but this is also the Productivity Bundle. This bundle includes a detachable Bluetooth keyboard, along with a 12-month Microsoft 365 subscription.

You may not think that the Fire HD 10 Plus is really designed for productivity, but since you can download all of Microsoft’s Office apps, it’s a step in that direction. Being able to fire up your emails or get some work done with Word is extremely helpful. Amazon has tapped popular case-maker Fintie to provide the keyboard.

The keyboard itself is a bit cramped for someone who is used to working from either an iPad Pro or Surface Pro X. But it’s still pretty great to have the option to slap on a keyboard and head to a local coffee shop.

If there’s one thing that Amazon knows how to do, it’s making content easy to consume. Just like every other Fire tablet, you can enjoy the fruits of your Prime subscription with Prime Video, Kindle, and Amazon Music.

There’s even a dedicated “Games” app that acts as a hub for all of your downloaded games. And Amazon has done a wonderful job at putting your favorite content right in front of you. 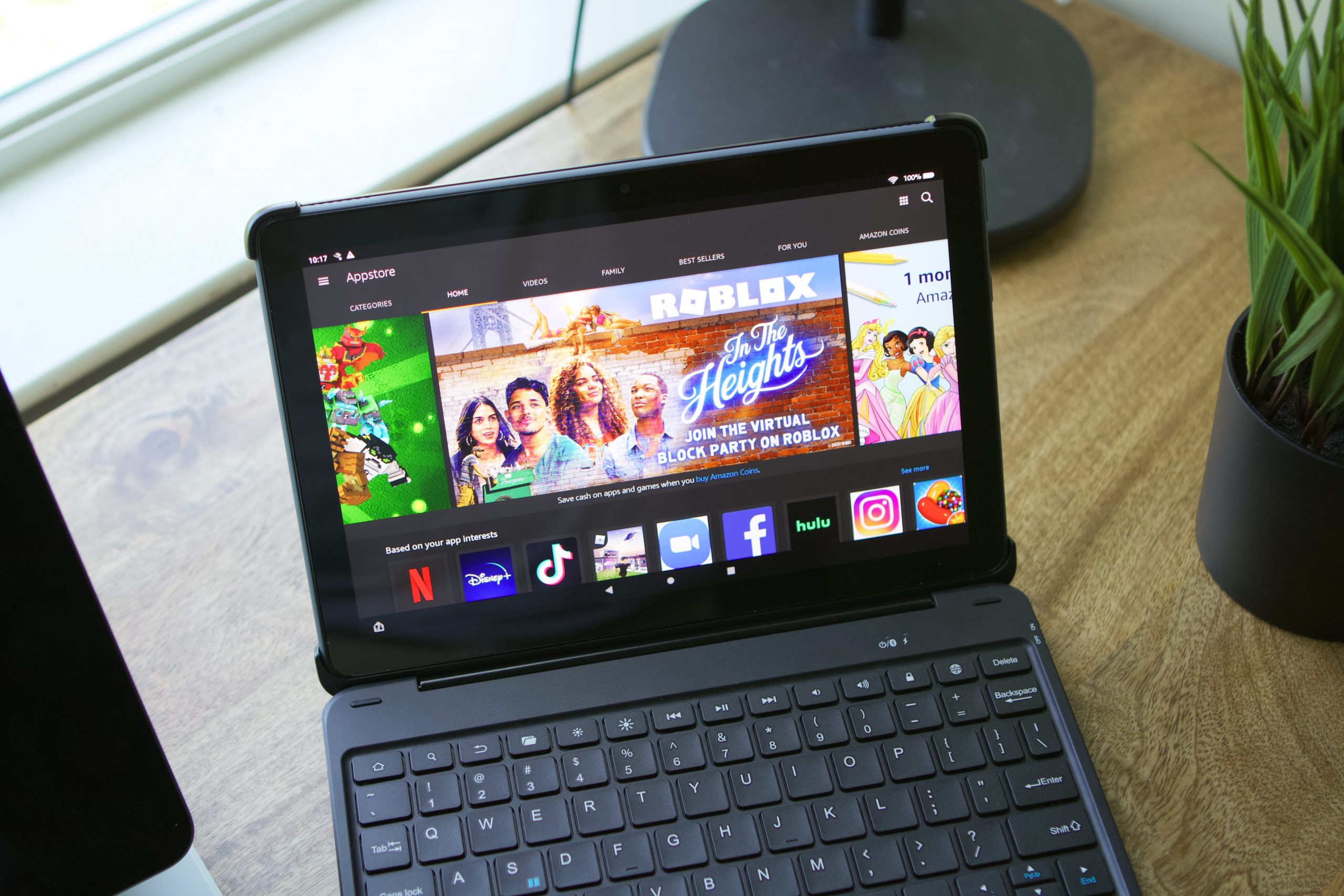 It’s not like I was hoping that the Fire HD 10 Plus would light the world on fire, because this tablet isn’t designed to be a laptop replacement. Instead, it’s just your run-of-the-mill Android tablet with a custom skin slapped on top and more than a few Amazon-only features. But I still have some gripes about the tablet on the whole.

The design is a bit stale

Outside of the soft-touch back and the buttons all placed on one-side, it might be time for a redesign. The Fire HD 10 Plus sports the same design as its predecessor, featuring those thick bezels that are a callback to the old days. Amazon just needs to take a look around and see that bezels have slimmed down a bit and if there is any device that would benefit from a design overhaul, it would be its largest tablet.

Fire OS is just as bad 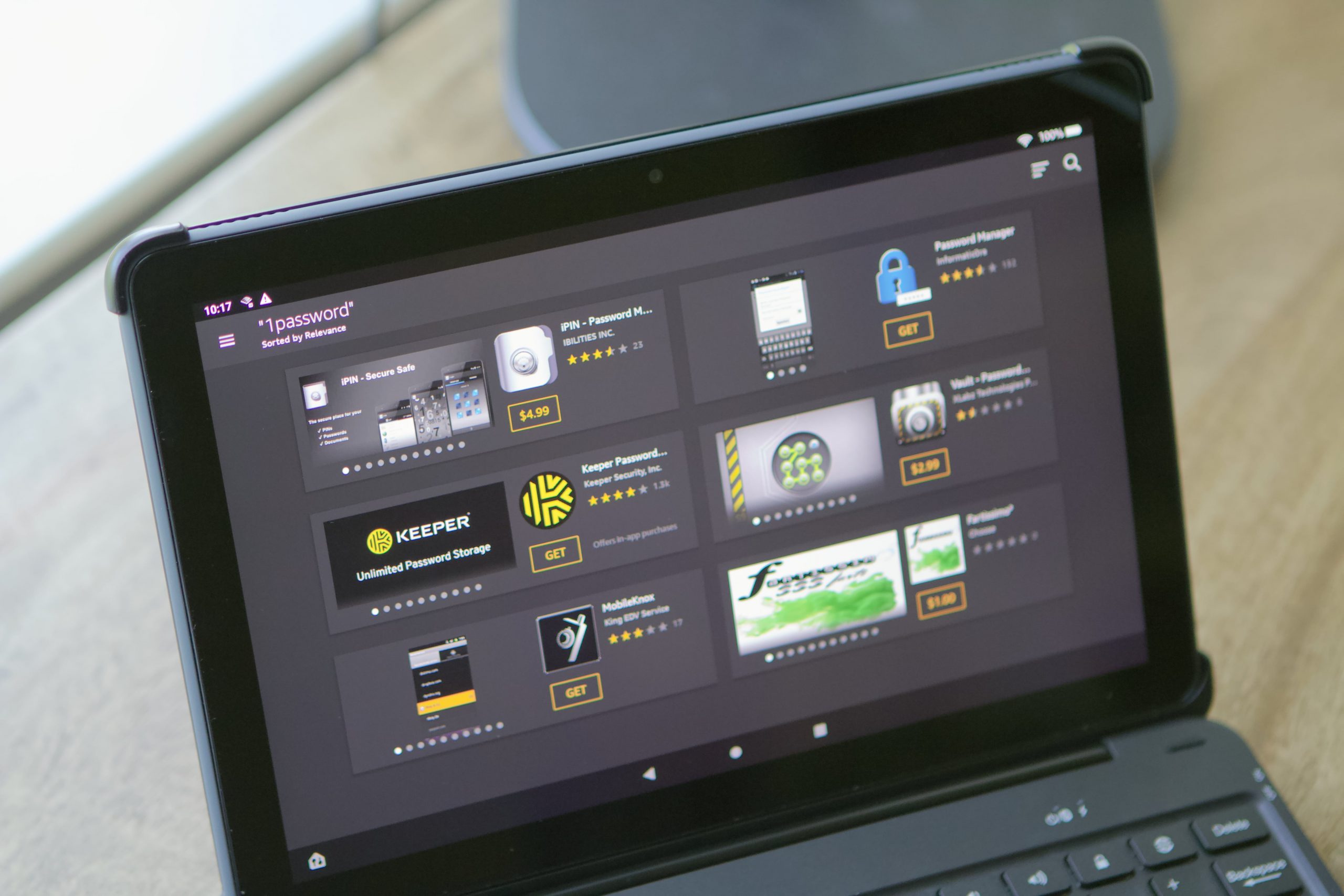 On one hand, Amazon’s operating system is fantastic for those who just want everything laid out for them from the jump. On the other, it can be a frustrating interface to navigate. It’s not impossible, but Fire OS just isn’t the most intuitive mobile OS, and it’s been quite a while since we’ve seen a substantial update.

But this also brings us to the Amazon App Store. It feels as though Amazon has been paying very little attention to its app ecosystem. Not being able to download some of my most-used apps like 1Password is just not acceptable today. Maybe Amazon’s partnership with Microsoft to bring the Amazon App Store to Windows 11 will change things. But I’m not holding my breath.

This one is a bit more of a qualm than anything else. Amazon took the time to upgrade things like the battery life and the RAM. But it’s still using the same MediaTek processor found in the 2019 version of the tablet.

You won’t notice any major lagging or stuttering in day-to-day usage, but once you start trying to multi-task and it becomes apparent. Considering that there’s a new Productivity Bundle, it would have been nice to see even just one model feature an updated processor.

Amazon Fire HD 10 Plus: Should you buy it? 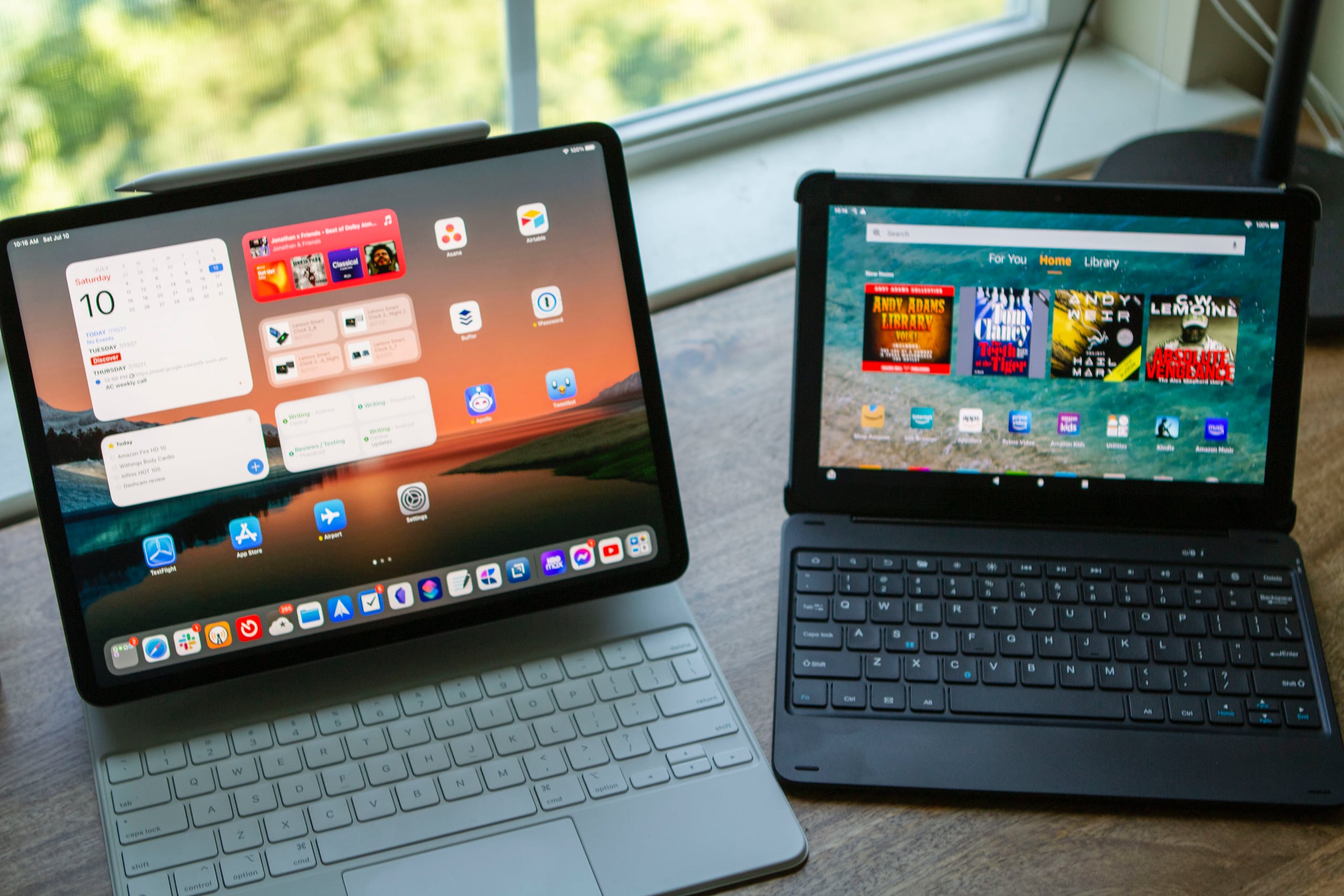 If you don’t want an iPad, don’t want to spend the money on a Samsung Galaxy tablet, but still want an Android tablet, the Fire HD 10 Plus is it. It puts your Amazon content front and center while providing access to most of the popular streaming services. If you add in the optional Anker dock, and this transforms into an Echo Show of sorts that you can take anywhere.

Amazon knows what it’s doing, as the Fire tablets remain some of the most popular options available today. We’re just hoping that the design gets overhauled in the near future, along with improving the app selection in the Amazon App Store.

If you want the best Amazon tablet in terms of specs and size, this is it. You’ll get access to all of your favorite Amazon content, just don’t expect to find all of the same apps that you would on the Play Store.