The floodgates for the Galaxy S21 FE are starting to open, as we are seeing more and more leaks regarding the device expected to land later this year. This time around, the phone has passed through Geekbench (via MySmartPrice), revealing that there could be a few different configurations available when the phone launches.

In the Geekbench listing, we learned that the Snapdragon 888 will be at the helm, while this specific configuration featured 8GB of RAM while sporting Android 11 likely with Samsung’s One UI 3.0. The model number was revealed, as the Galaxy S21 FE will be known as the SM-G990B internally. 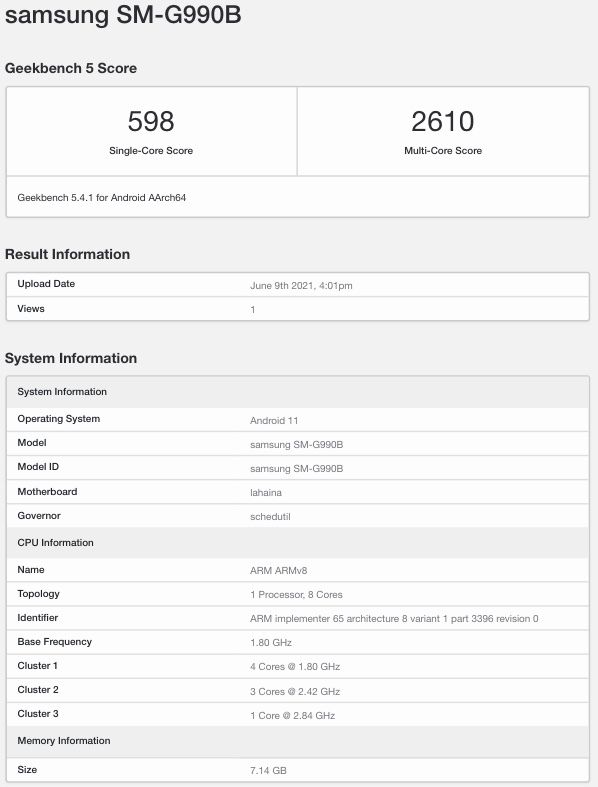 As for the scores, this version of the Galaxy S21 FE sported a 592 single-core score and a 2610 multi-core score. This lines up with what we’ve seen from other Snapdragon 888 chipsets, so there was really no surprise here.

Unfortunately, there’s no mention or indication as to the other internals that Samsung will be including with the Galaxy S21 FE. But other rumors and leaks have suggested that it will sport a design similar to that standard Galaxy S21 with a triple camera array. The display will measure about 6.41-inches while featuring a 120Hz refresh rate, along with either 128GB or 256GB of storage and a 4,500mAh battery.

There’s no specific timetable as to when Samsung will unveil its next Fan Edition device, but we’re expecting to see it sometime this Summer. It could be a quiet announcement made via press release, or the phone could make its appearance alongside the Galaxy Z Fold 3 and Galaxy Z Flip 3 slated to be announced in August or September.