When it comes to technology and new products, there’s something to be said about avoiding the first iteration of the device. It’s a constant trend that we continue to see, as evidenced by the Galaxy Fold to the Galaxy Z Fold 2, and will presumably see when the Surface Duo 2 is launched sometime later this year. But the same guidelines and rules apply to accessories like the Amazon Echo Buds.

The original Echo Buds were Amazon’s entryway into competing with the likes of Samsung’s Galaxy Buds+ and obviously, the Apple AirPods Pro. These featured some interesting noise cancelation courtesy of Bose, along with providing a hands-free Amazon Alexa experience. But for the most part, the original Echo Buds simply fell flat and couldn’t compete against the “big dogs”.

Amazon took notes on its first-generation product and has come back with the Amazon Echo Buds 2nd Gen. This time around, Amazon promises true active noise cancellation, a long-lasting battery, and the same hands-free Alexa experience that you may have enjoyed from the first iteration. 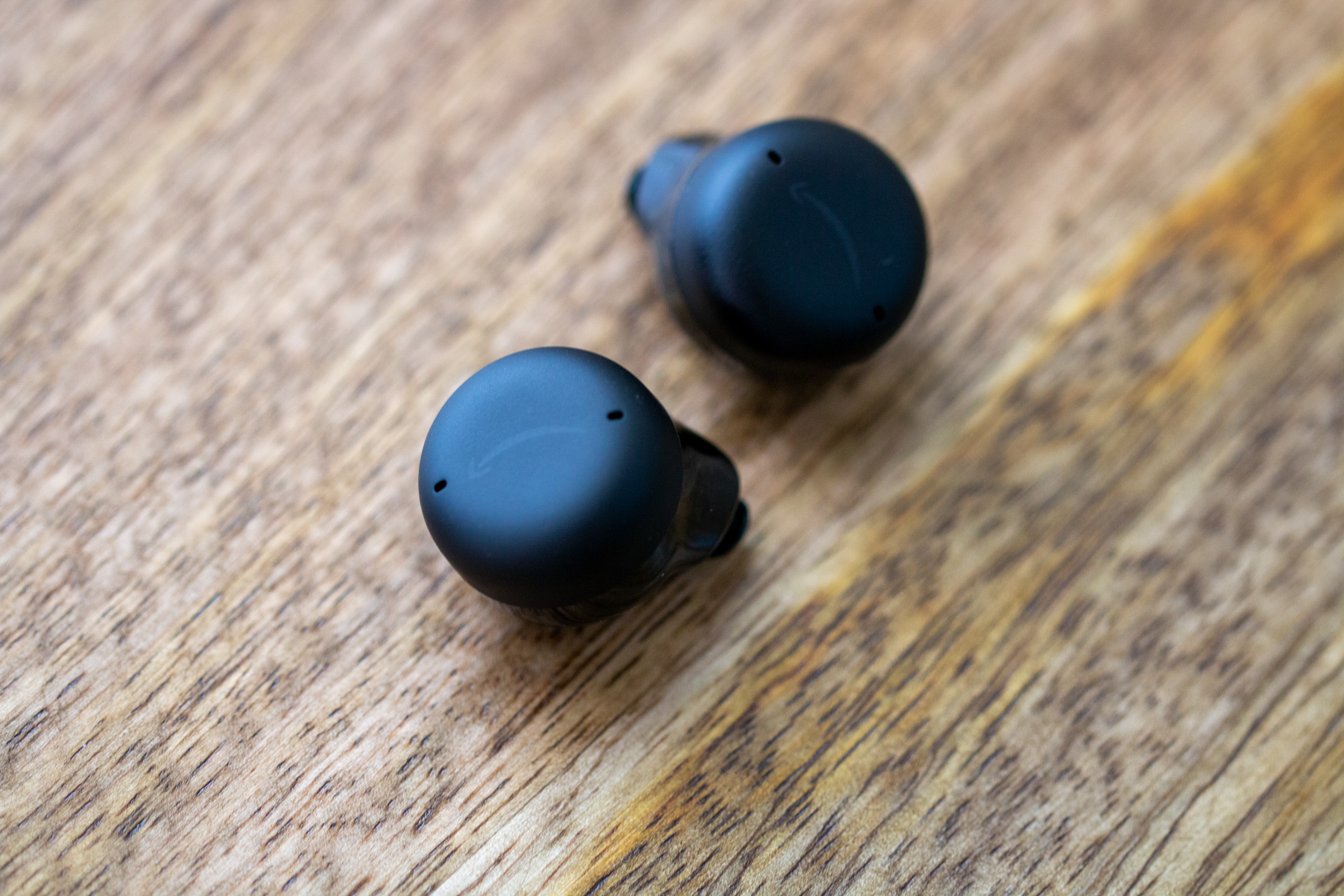 Amazon opted to go with a slightly different design for the new Echo Buds, opting to remove the odd-looking round touchpad on the outside of the earbud in favor of an all-matte finish. This blends into a glossy plastic material the closer you get to the stem, which can be entirely covered up by one of the included wing-tips.

The case itself is smaller and lighter than its predecessor, with no noticeable Amazon branding until you look at the bottom where you’ll be greeted with the Amazon logo. On the back of the case, you’ll find the USB-C charging port and a pairing button, and that’s about it. Well, other than the LED battery status indicator on the front, just below where the lid closes.

As for the Echo Buds themselves, these are much more comfortable to use and don’t stick out nearly as far as the original Echo Buds. It doesn’t matter if you have oddly-shaped ears or not, nobody wants to really deal with earbuds that egregiously stick out and Amazon did a great job at slimming the 2nd-generation Echo Buds. 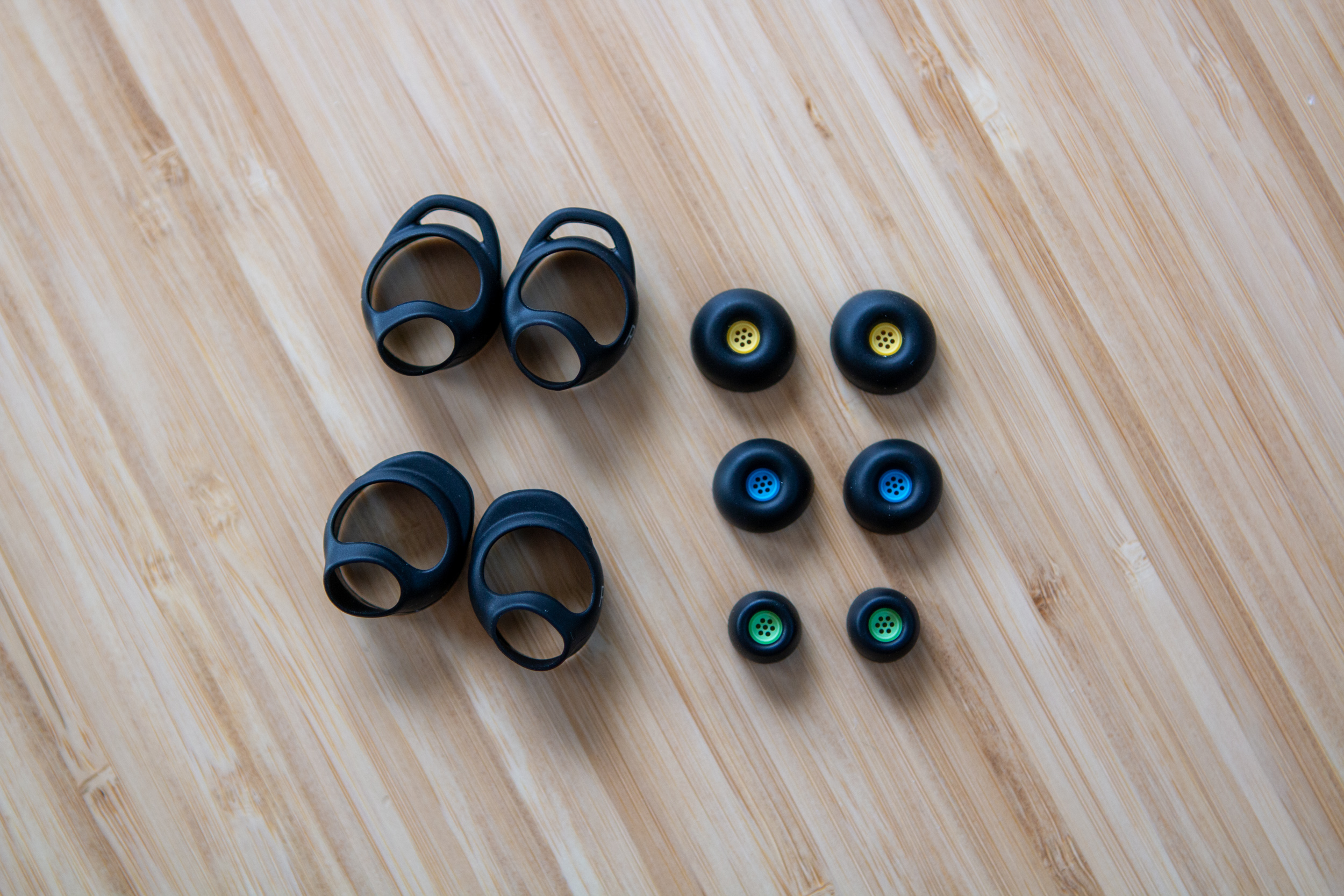 In the box, you’ll find the Echo Buds, charging case, and a plethora of different ear tips and wing-tips to try and get the perfect fit, but more on that later. There’s even a USB-C to USB-A charging cable just in case you didn’t already have a million of those lying around.

With the new Echo Buds, you have a few different options to choose from. One configuration provides the Echo Buds and a USB-C charging case, while the other includes a wireless charging case. Amazon even partnered with Anker to release a new Amazon-branded wireless charging pad, but we’re still waiting for that to arrive. It’s been delayed a few times already, and at the time of this writing, the combination with Echo Buds and charging case still isn’t estimated to ship until August. 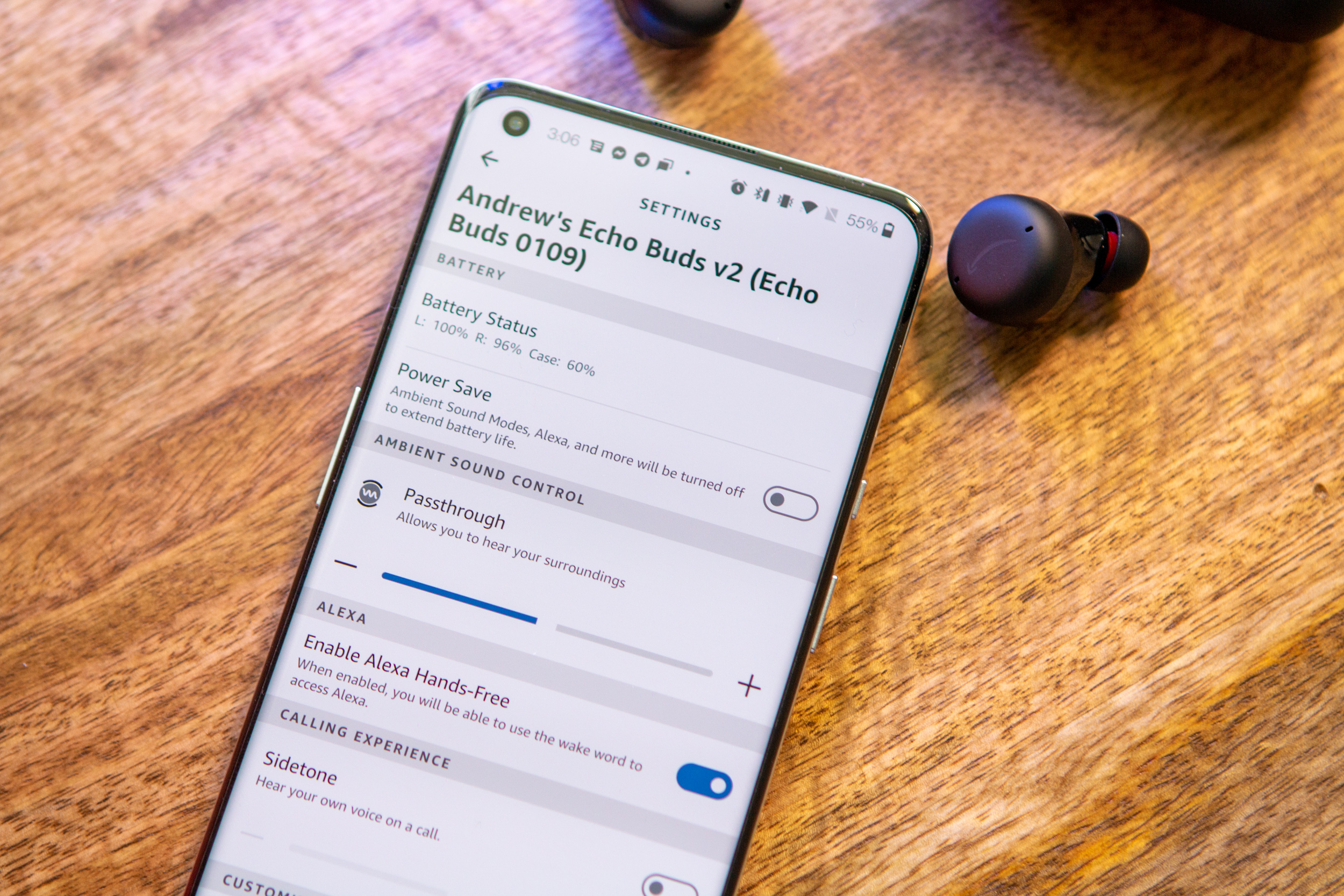 Battery life is always a mixed bag when it comes to truly wireless earbuds, and that’s what you’ll end up with when using the Echo Buds. In our testing, we ran across incorrect battery readings consistently, especially when comparing what the Alexa app displayed and what Alexa would tell you if you asked her how much battery is left. For instance, while writing this review, the Alexa app says that the Left and Right earbuds have 45% remaining, while the battery case is at 100%. Using hands-free Alexa, I asked how much battery is left and was provided with 38% in the left, 51% in the right, and 78% on the case.

The Echo Buds aren’t going to get you through the entire day, but they will get you through at least half the day with ease. We consistently found between four to 4.5 hours of listening time before needing to put them back in the case. This is average at best, but it also doesn’t come as too much of a surprise if you’re using ANC all the time, and/or are constantly asking Alexa to send messages or perform other tasks. 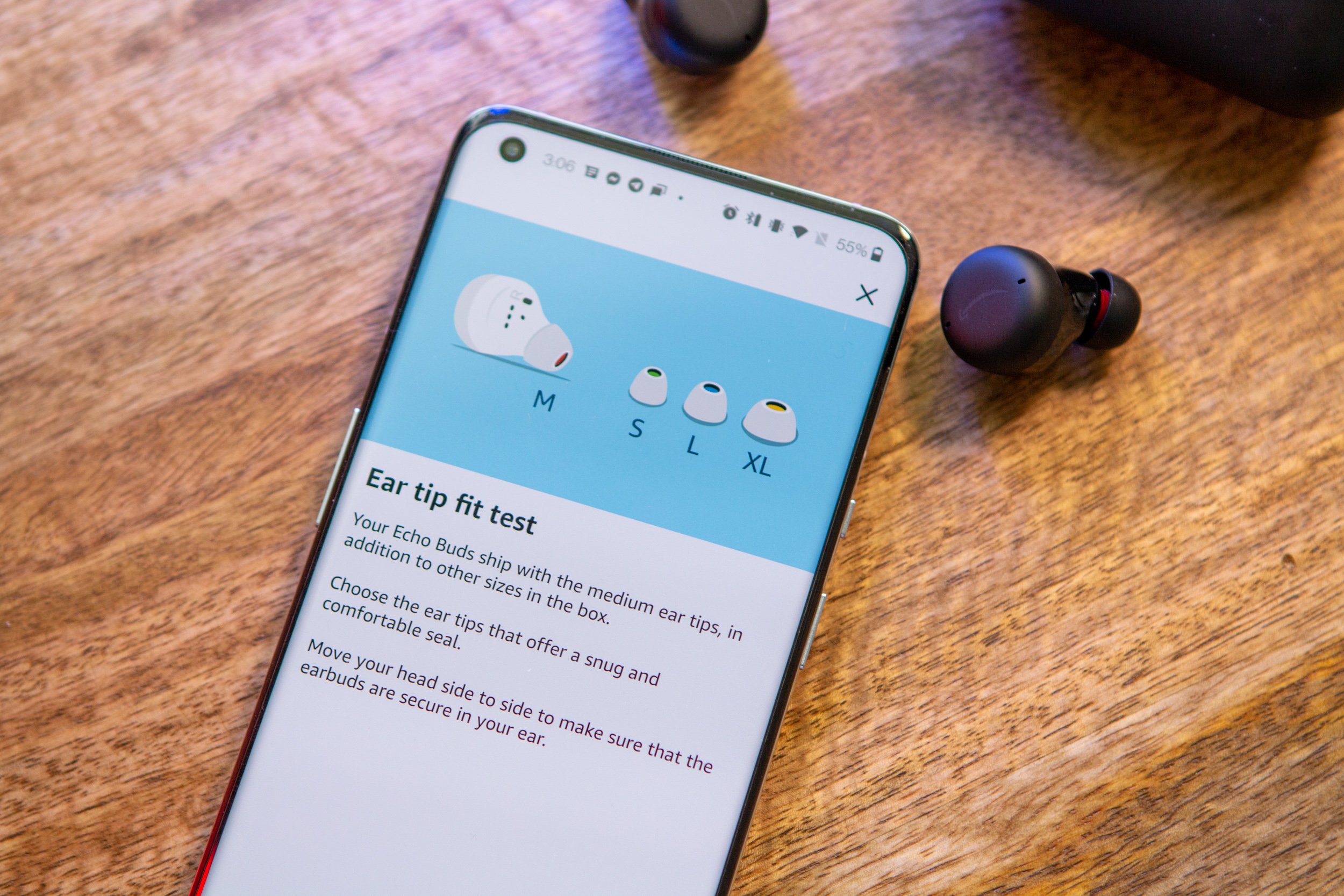 It’s one thing to just grab a new pair of headphones, throw them on the charger and then start using them. But we’re seeing more and more earbud-makers add something that’s called the “Ear Tip Fit Test”. This is a new addition to the Echo Buds (2nd Gen), and is something that we would recommend everyone try out before just throwing on some music. Following the steps in the Amazon Alexa app ensure that you have the best fit, which is important when it comes to providing accurate noise cancellation and better overall sound quality.

Speaking of sound quality, the Echo Buds sounded pretty flat coming out of the box, even after performing the Ear Tip Fit Test for myself. Thankfully, there’s an equalizer built into the Alexa app, that allows a little bit of customization for the bass, treble, and mid-range sounds. Your mileage may vary, but adjusting the equalizer definitely helped my music “punch” a little bit more than what I got out of the box. 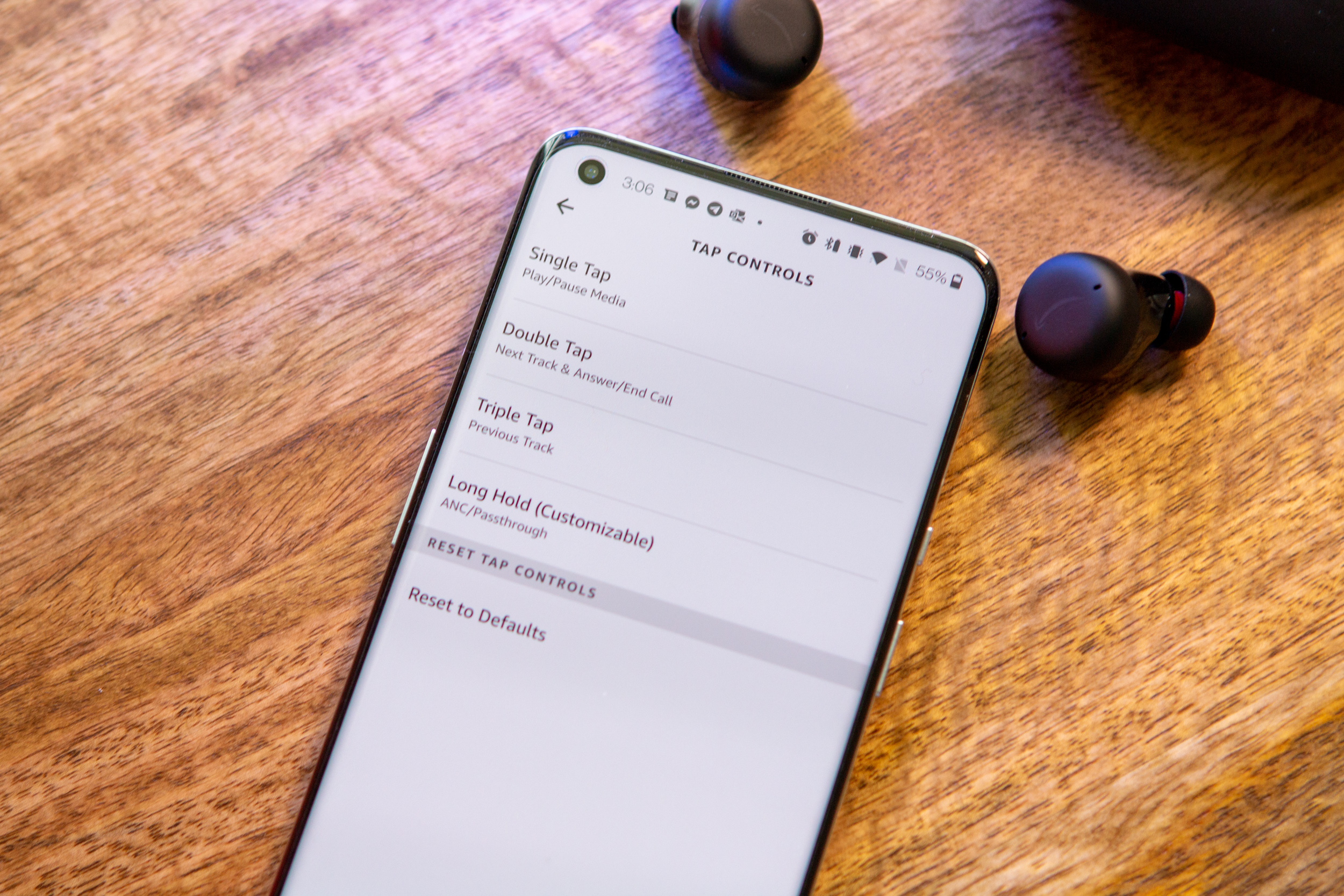 When you’re looking for some new earbuds, chances are one of the defining features is active noise cancelation. Instead of partnering with Bose, Amazon opted for something entirely different this go-’round, and it’s much better than many other truly wireless earbuds out there. Amazon hasn’t exactly found the right combination to truly compete with the likes of the Jabra Elite 85t or Galaxy Buds Pro, but it’s definitely getting close. There’s even a Passthrough mode which is also becoming a staple with other earbuds as a way to have a conversation without constantly needing to take your headphones out. With Passthrough, just press and hold on the touchpad for two seconds and the mode will be activated.

Even when going out for a walk on a semi-busy trail, the Echo Buds held up and actually left me getting scared once or twice by people walking behind and past me. That’s when I switched over to Passthrough mode, which was worth the sacrifice in sound quality just to avoid getting startled. 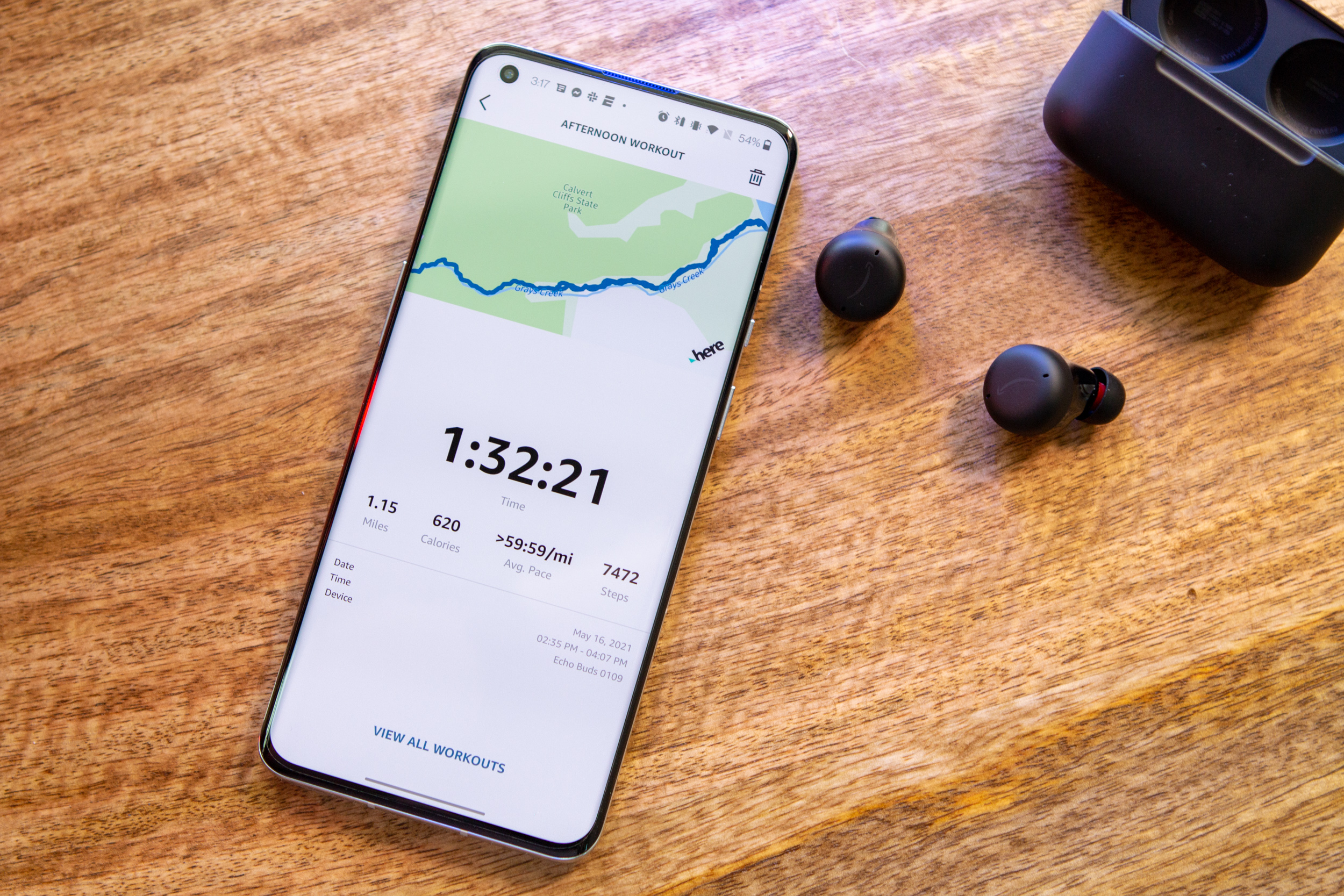 We’ve touched on the wireless charging capabilities, along with the ANC and Passthrough modes. But the new Amazon Echo Buds have another “trick” up its sleeve with “Workout” mode. Using the Echo Buds and the Alexa app, you can tap the Workout button and it will do its damndest to keep track of your workout. There’s even route mapping available through the Alexa app, so you can see your path on the map. Now, this isn’t going to track your weight lifting sessions or anything like that, but if you go on or for a brisk walk and want to keep track of your steps, it’s pretty awesome.

Throughout the workout, Alexa will let you know when you’ve reached certain milestones kind of like putting a mile marker in your ears. You can go hands-free and have Alexa start or stop your workout, or you can just use the Alexa app to manually do it yourself. Then, you’ll be provided with some information including distance, calories, pace, and how many steps you took. This may not be the most accurate solution, but it’s a fantastic option if you don’t want to wear a traditional fitness tracker or smartwatch.

Should you buy the Amazon Echo Buds (2nd Gen)? 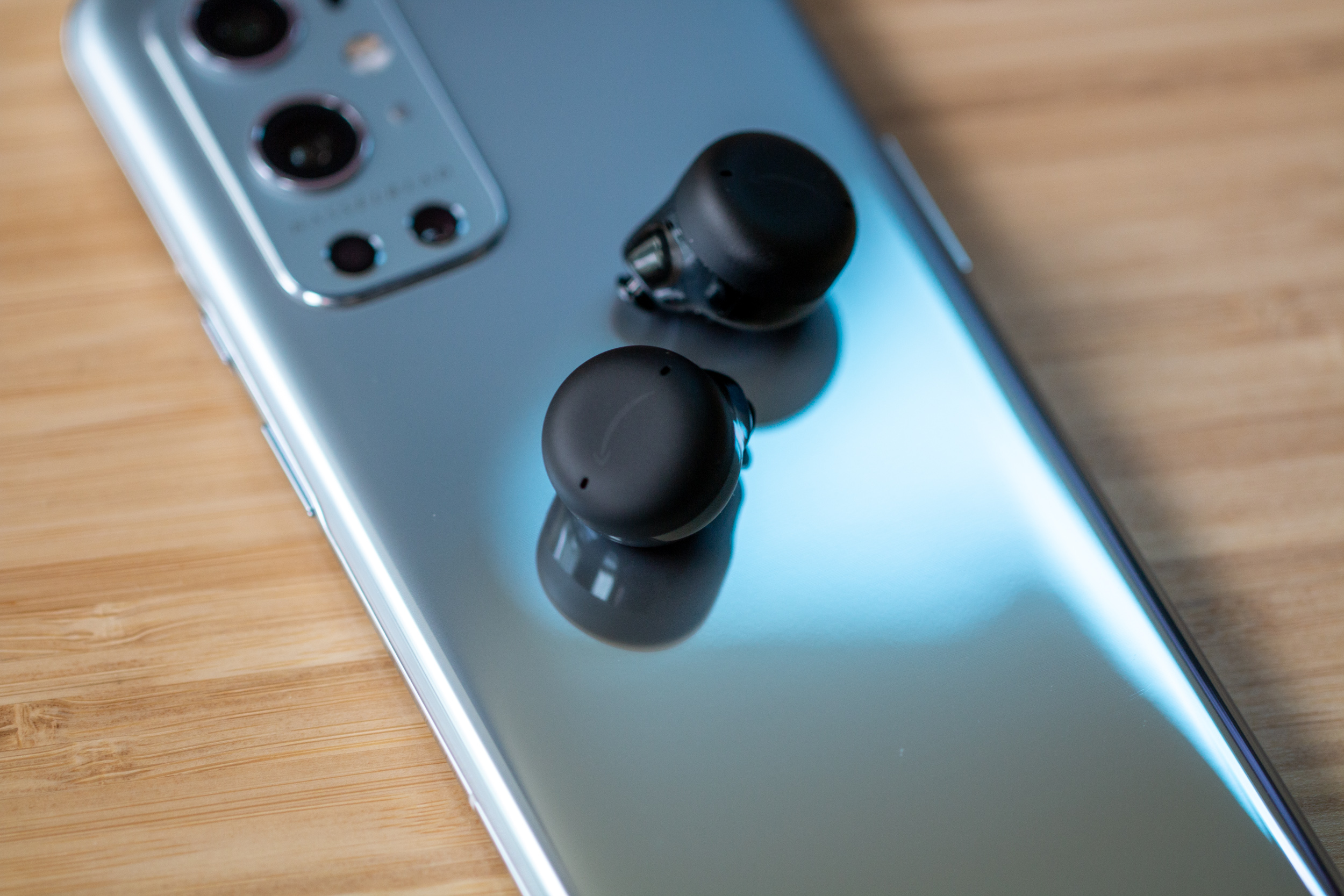 Amazon did a really great job with the 2nd-generation Amazon Echo Buds, and save for a few quirks, these should definitely be in consideration for your next headphones. Between the improved ANC (compared to the first generation), wireless charging capabilities, and built-in fitness tracking, you can’t really go wrong here.

Even if you aren’t a firm believer of the Amazon Alexa ecosystem, you’ll be able to configure these to work with Google Assistant or even Siri for iPhone users. But if you do grab the Echo Buds (2nd Gen) for yourself, make sure you get the wireless charging case and try out that Ear Tip Fit Test to get the most comfortable fit possible.

Amazon took all of the qualms of the first Echo Buds and improved on every single aspect with the new Echo Buds (2nd Gen). These are solid headphones that don’t break the bank and will be great for everyone, even if you aren’t part of the Alexa ecosystem.