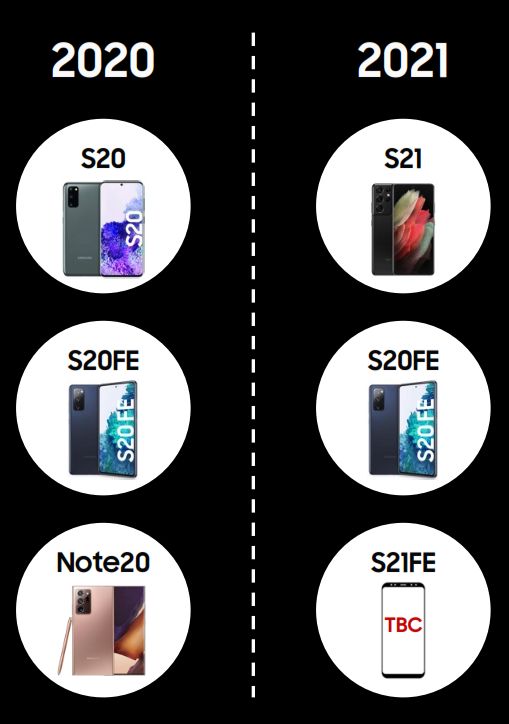 The graphic shared by @evleaks shows how Samsung has positioned its devices so far in 2021, with the S21 supplanting the Galaxy S20, the S20 FE sticking around, and the Galaxy S21 FE to replace the Galaxy Note 20. But what does this actually mean for the S21 FE in terms of capabilities?

With the Galaxy S21 Ultra, it marked the first non-Note smartphone to launch with S Pen support. So does this mean that the Galaxy S21 FE will bring compatibility with Samsung’s ultra-useful stylus? Are we going to see the design of the Galaxy Note 20 re-used with some upgraded specs and an integrated S Pen?

If Samsung were to go this route, it would be an interesting move, to say the least, but it’s not completely out of the question. The normal Galaxy Note 20 was lambasted for being priced at $999 despite sub par specs compared to the Ultra variant, including the use of a plastic body instead of the glass and metal sandwich. This could give Samsung an opportunity to play to the heartstrings of Galaxy Note fans while releasing a new and more budget-friendly Galaxy Note.

There are also considerations to be made in regards to the actual “FE” or Fan Edition moniker. This didn’t start with the Galaxy S20 FE, as Samsung first debuted the FE moniker alongside the Galaxy Note following the Galaxy Note 7 fiasco. After being forced to recall the Note 7, Samsung released “fixed” versions called the Galaxy Note FE. Maybe Samsung wants to pay homage to its past? Or maybe Samsung doesn’t want to disappoint a loyal customer base by forgoing a Galaxy Note in 2021 after all.