These days, it’s pretty easy to find a laptop that fits your exact needs at a price that’s fairly competitive. Head on over to Best Buy’s website or Newegg.com and you’ll have plenty of options to choose from. If you’re not a hardcore gamer or someone who uses their laptop for media production, anything under $1,000 will get the job done and all you really need to worry about is how big of a display you want and how long the battery will last you.

That being said, it’s a bit harder to find the perfect laptop if you need a true workhorse horse – something that has enough power to edit and render video but doesn’t necessarily come with accented RBG lighting and flames on the side like many gaming laptops do these days.

Enter the 15-inch Lenovo Yoga 9i. A serious laptop, built to get serious work done.

On paper, the 10th Gen core i9 with the GTX 1650 can’t even come close to the performance I can get out of my custom PC build featuring an AMD Ryzen 7 3700 with a GTX 3070, but I have to admit that I’ve used the Yoga 9i just as much, if not more than my desktop computer. 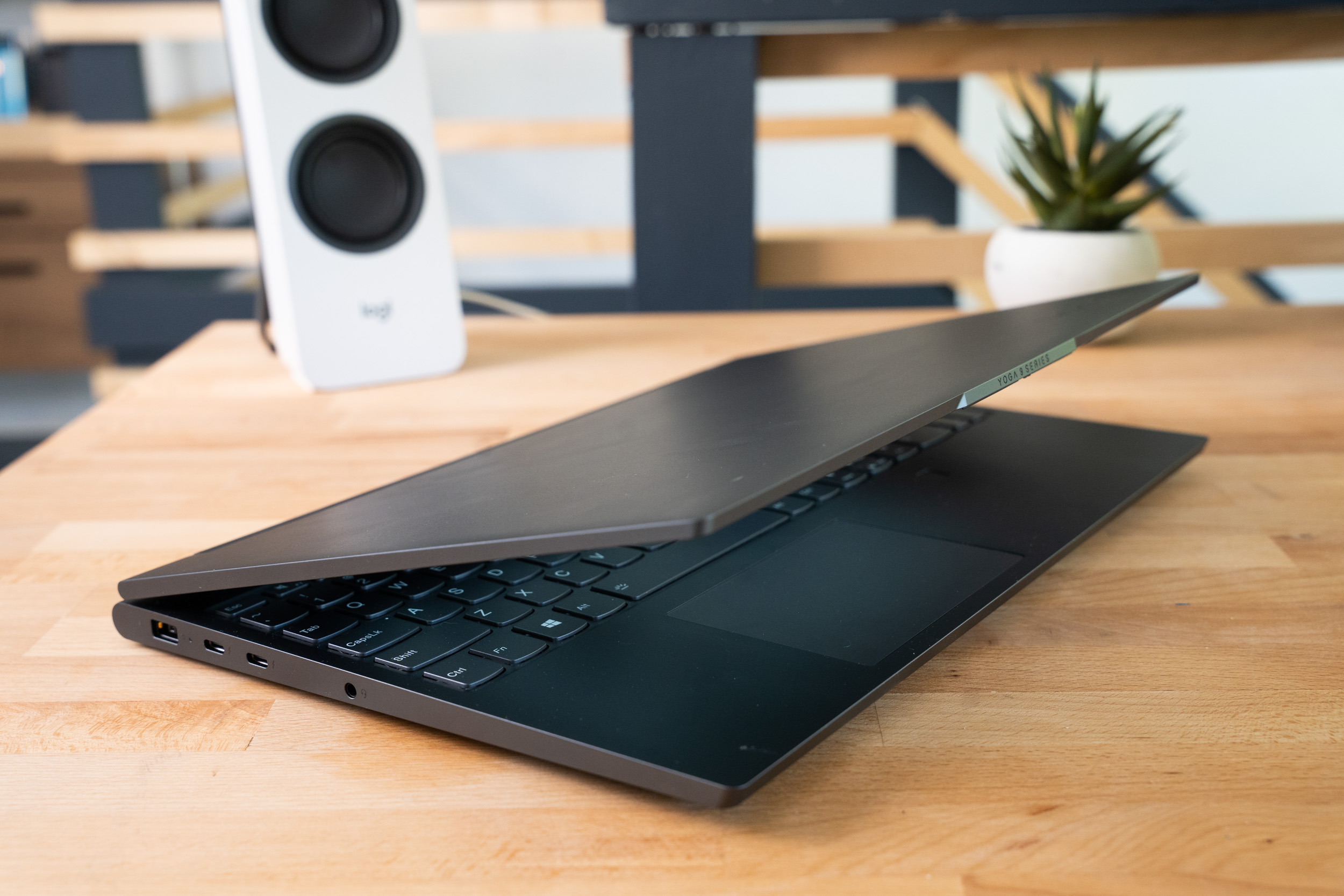 The first thing I’ll say about the 15-inch Yoga 9i that I’m reviewing is that it’s not a budget-friendly laptop. The base model starts at $1,699 and goes all the way up to $2,699 if you want to max things out with 16GB of RAM, a 4k HDR display, 2TB of SSD storage, and that 10th Gen Intel Core i9 I already mentioned. Spending $2699 on a laptop may sound excessive, but if you’re using it as a tool for work rather than something you’re using simply to check your Facebook feed or watch Netflix, the price isn’t as bad as it seems. 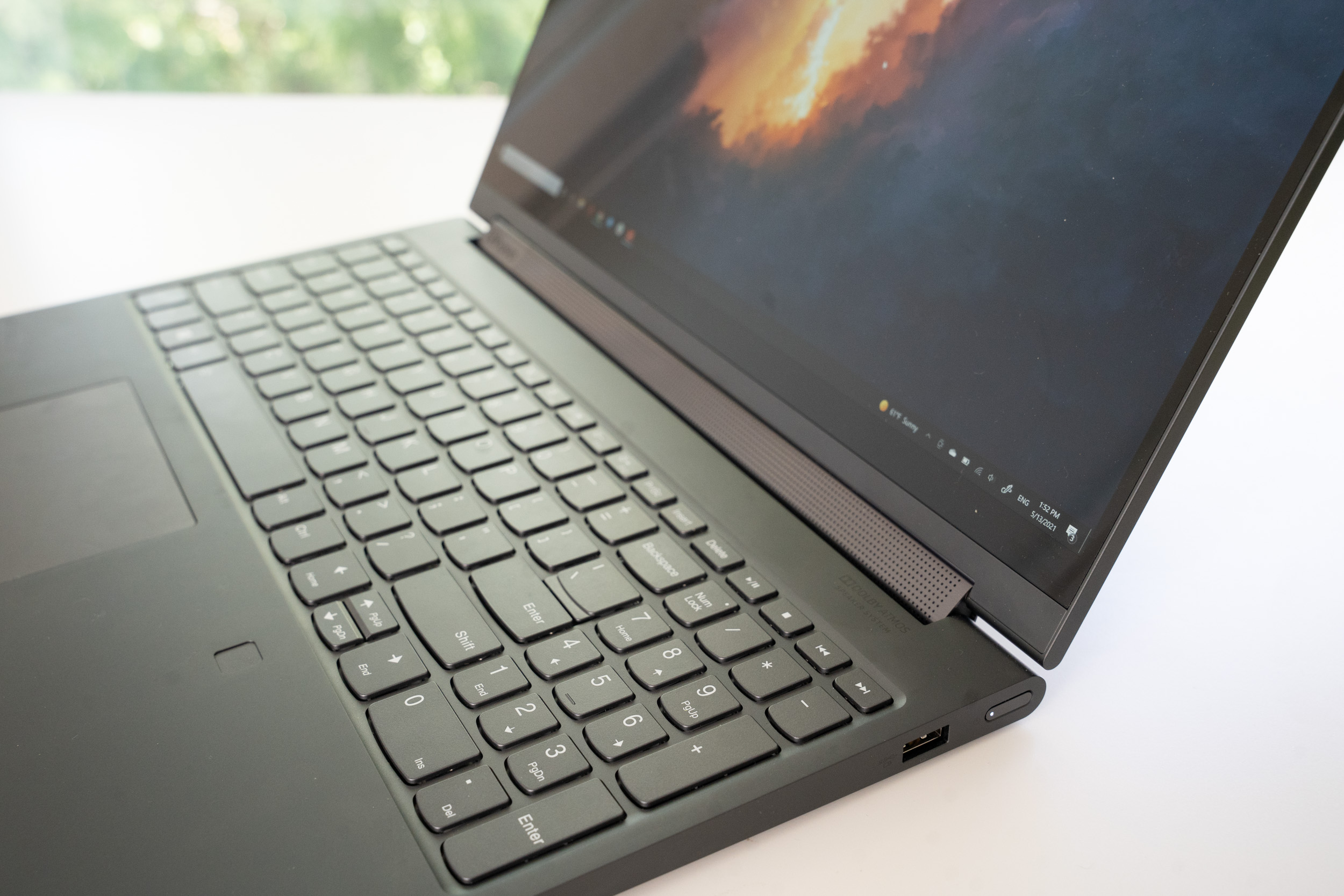 As the name implies, the Yoga 9i is a 2-in-1 form factor which means the hinge allows the display to flip all the way around to the back, allowing the laptop to transform into a massive tablet or flip over into tent mode for watching videos.

Along the left edge are two USB-C ports with Thunderbolt support and Lenovo’s proprietary charging port while the right edge houses a single USB A port and the power button. Since this laptop built for heavy-duty media creation, it’s disappointing to see that Lenovo decided not to include an SD or even a microSD card slot for those who need to transfer files to the laptop from a camera. This is especially consuming when you see microSD card slots on many of Lenovo’s cheaper laptops and even some of their Chromebooks despite the fact that ChromeOS really isn’t built for media editing. 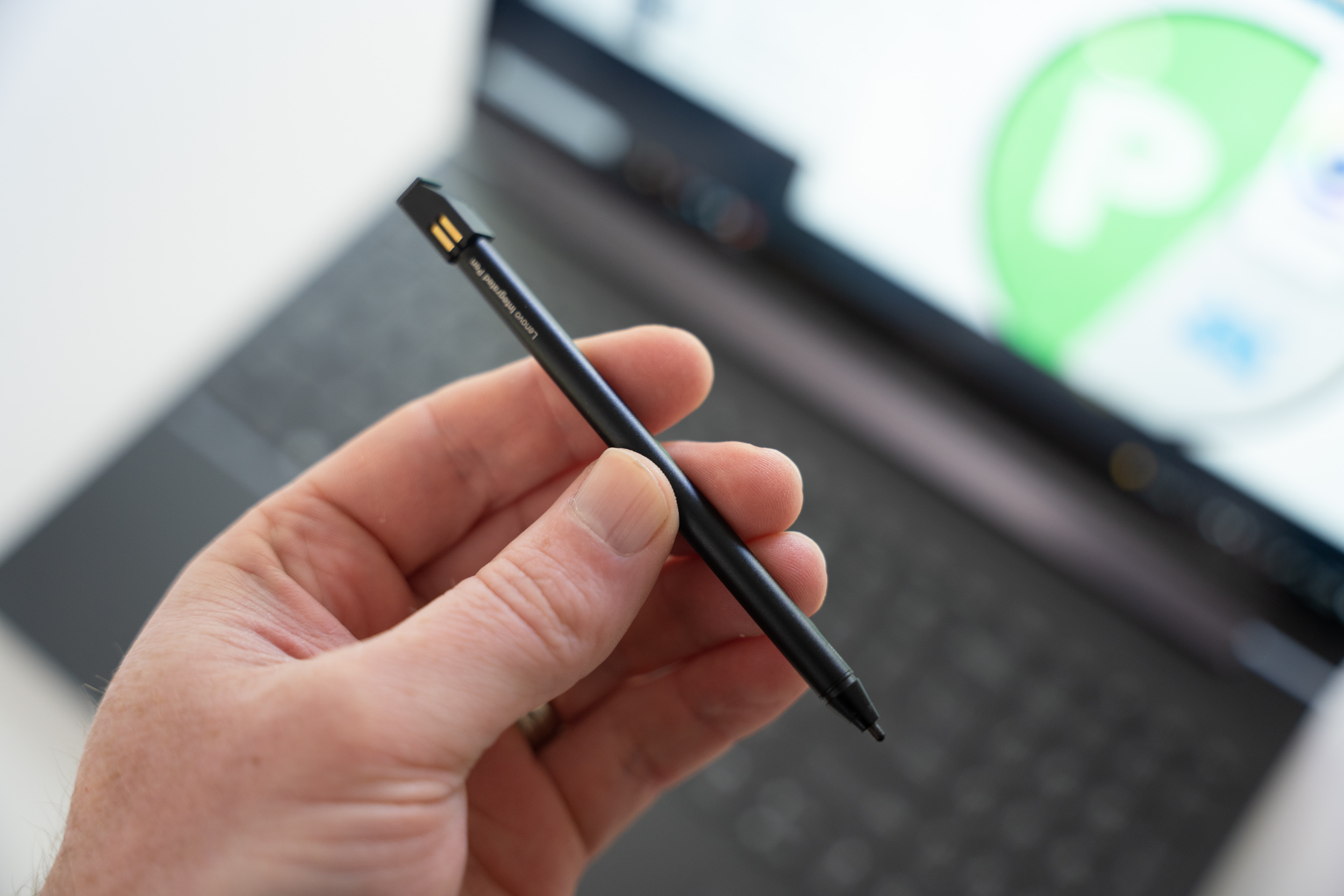 When using the laptop in tablet mode, the Wacom pen that’s stored inside the body of the laptop, along the right edge, comes in extremely handy if you like taking written notes or use a pen for digital artwork. Just like the S Pen on a Samsung Galaxy Note, the pen charges when it’s inserted into its’ slot. It’s not as comfortable as the Surface Pen since it’s quite a bit smaller, but the fact that it comes included with the laptop and that you have a safe and secure place to store it makes it quite a bit more compelling.

But don’t think that it’ll act as a good replacement for an iPad Pro. While Windows 10 works pretty well with touch input, it’s nowhere near as compelling as iOS or even Android tablets, mainly due to how apps are designed for the platform. And of course, a 15-inch tablet that weighs 4.4 lbs isn’t quite as compelling as a smaller device unless you’re resting it on your lap or setting it on a desk while using it. 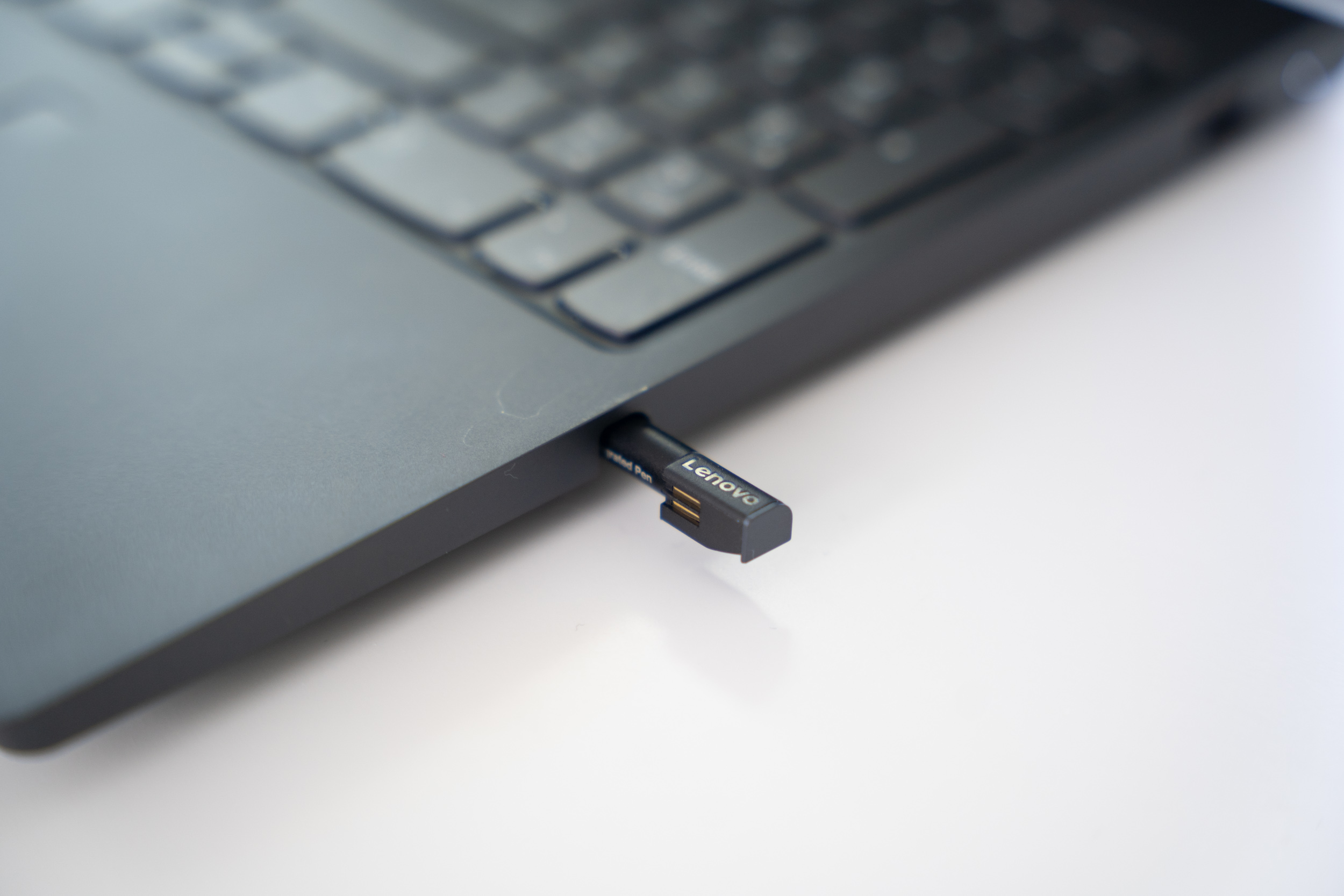 The built-in 720p webcam above the display is a bit of a disappointment. Having a physical privacy shutter that slides over the webcam is a nice touch, the webcam can get the job done in a pinch. But with so many people relying on webcams these days for video calls, the quality you get here on such an expensive laptop is definitely disappointing. You’d honestly be better off using the selfie camera on a $300 smartphone for your Zoom calls.

The laptop uses the same TrueStrike keyboard that we’ve seen on Lenovo’s Legion lineup with quite a bit of room between the keys, a dedicated number pad and customizable backlighting (as long as all the customization you want is off, medium or bright). Since we’re talking about a 15-inch laptop, it shouldn’t be surprising that the typing experience here is comfortable with decent key travel and enough space between each key that allows for pretty accurate typing.

Unlike many of today’s laptop keyboards, there isn’t a noticeable learning curve when switching to the Yoga 9i.

The large glass trackpad gives you plenty of room to navigate the massive display. Lenovo could have easily increased its size by 20% or more, but you’ll have no real issues with using the trackpad if you’re not the type who lugs around a wireless mouse with you everywhere you go. 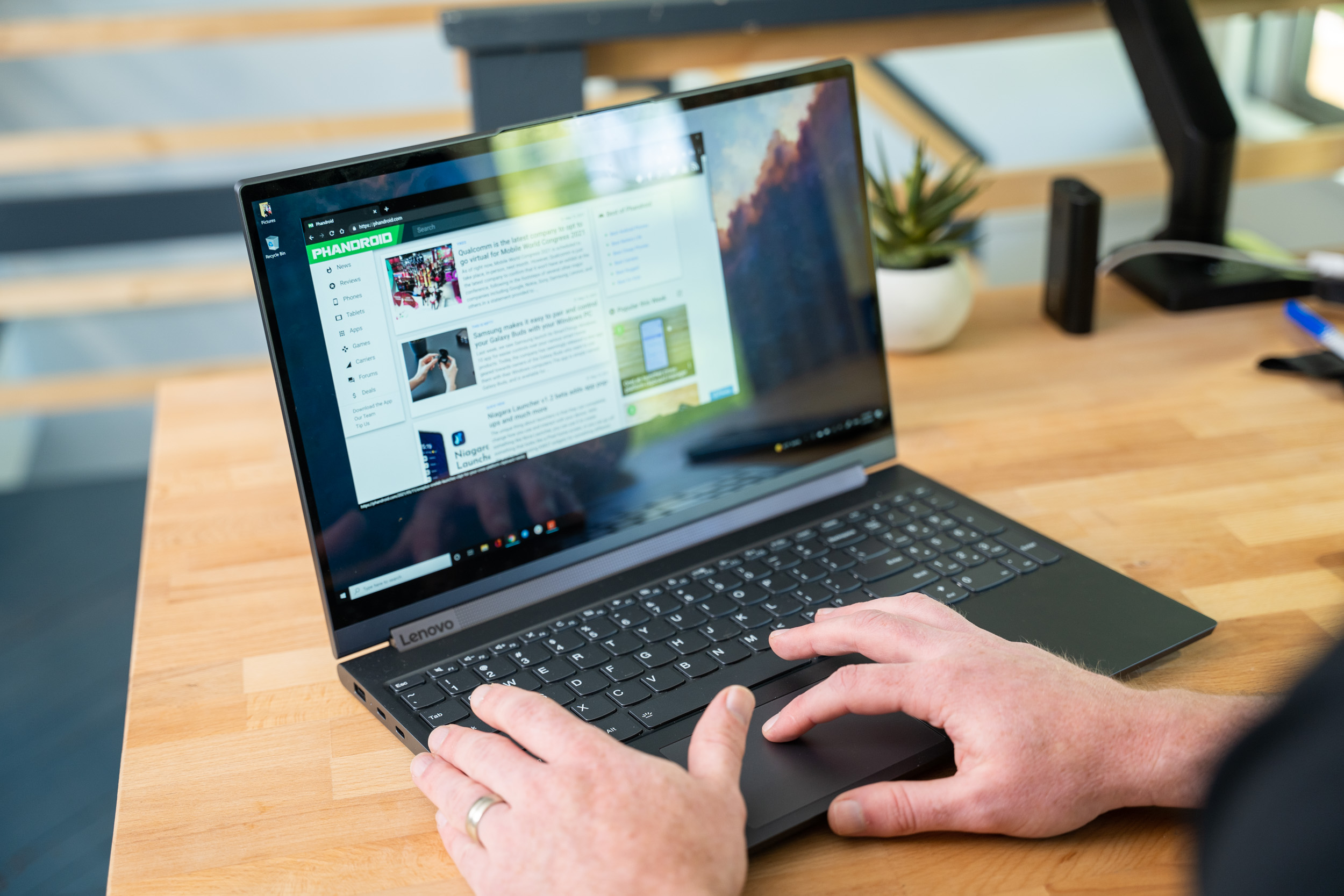 If you do a lot of video, photo, or graphics work, the update to the 4k display is definitely something to consider, giving you a much crisper panel to view your content on with incredibly accurate colors featuring Dolby Vision, HDR support. While the panel can seem quite bright while indoors with 500 nits of peak brightness, the glossy glass finish comes with a lot of glare that can make viewing the display a bit hard if you talk it outside or are working with your back to a window. The display is brighter than what Lenovo delivered with the Yoga C940, but with how bright displays can get these days on a smartphone, 700 or 800 nits of peak brightness is what I would expect when paying more than two and a half grand for a laptop these days.

Lenovo has experimented with a variety of different hinges on its Yoga laptops over the years. The hinge we see here is the same one we got on the previous generation which I honestly think is one of the best hinges we’ve seen on a laptop in years. It’s extremely sturdy while still allowing you to open the lid once handed thanks to the overall weights of the laptop. But the real reason why I love it is that it houses the stereo Dolby Atmo speakers which deliver incredible sound for a laptop. While typically rely on headphones while doing my video editing work or watching shows, I’ve used the built-in on this laptop significantly more than I expected. 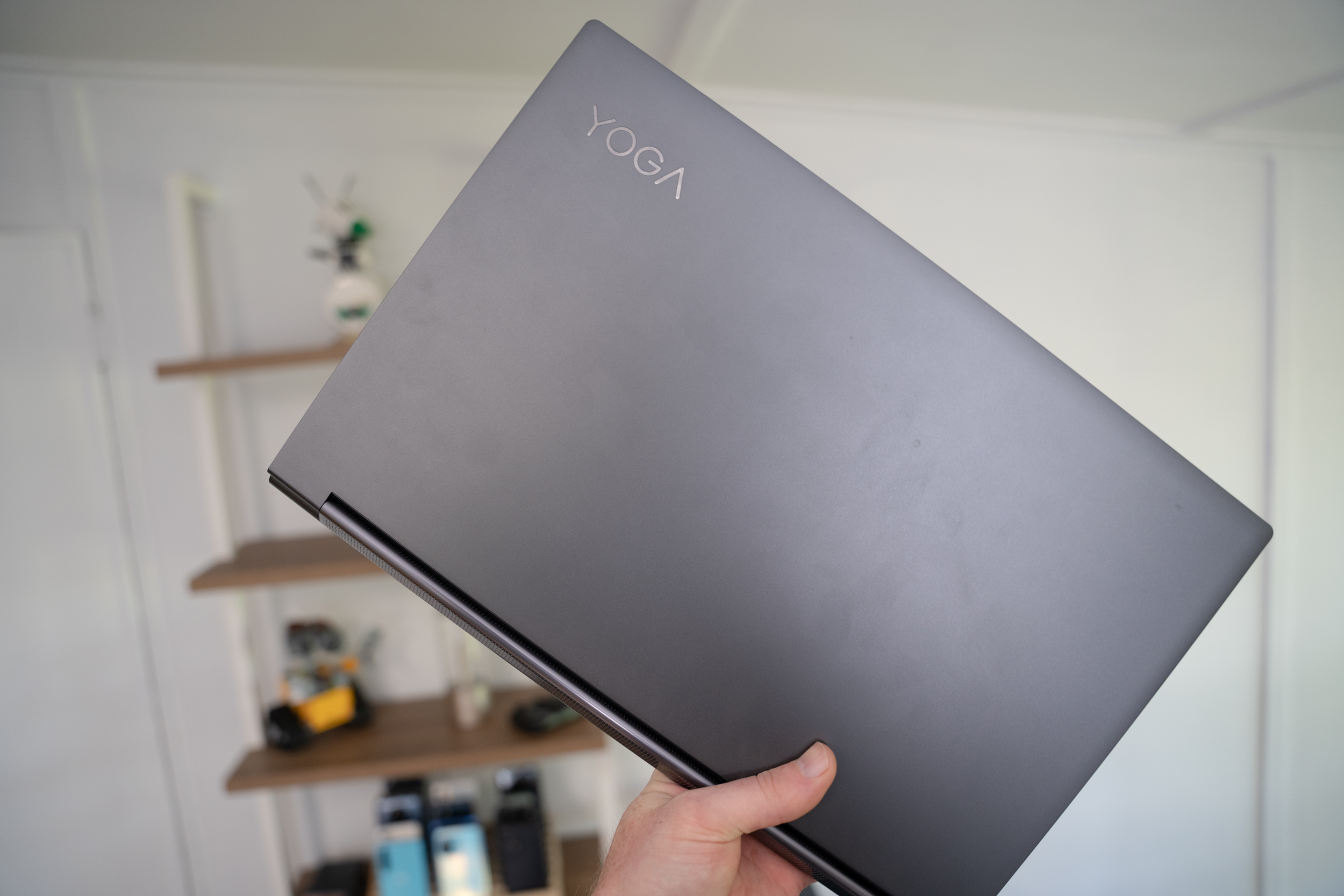 The Yoga Yoga 9i 15-inch was built with performance in mind. It’s not light and when you max out its specs with a Core i9 chipset, a 2TB SSD, 4k display, and 16GB of RAM, it’s definitely not cheap. The good news is that the performance you get out of this machine is definitely respectable. While it’s meant more as a work laptop for creators, it can also double as a gaming machine, just as long as you’re not worried about getting the best frame rates possible or having graphics settings set as high as possible.

That being said, if you don’t have an unlimited budget, getting the Core i7 variant which comes with only 1TB of internal storage will still deliver a great gaming and productivity experience while allowing you to keep an extra $900 or so in your pocket.

When it comes to battery life, the numbers offered up by the 69 Wh can be wildly inconsistent. Depending on what you’re doing, the battery inside this laptop can last between 2 hours while gaming or up to 12 hours if you’re watching videos with headphones for your audio. The reason for this comes down to how hard you’re pushing the GTX 1650 Ti graphics card and the Intel Core i9 CPU. 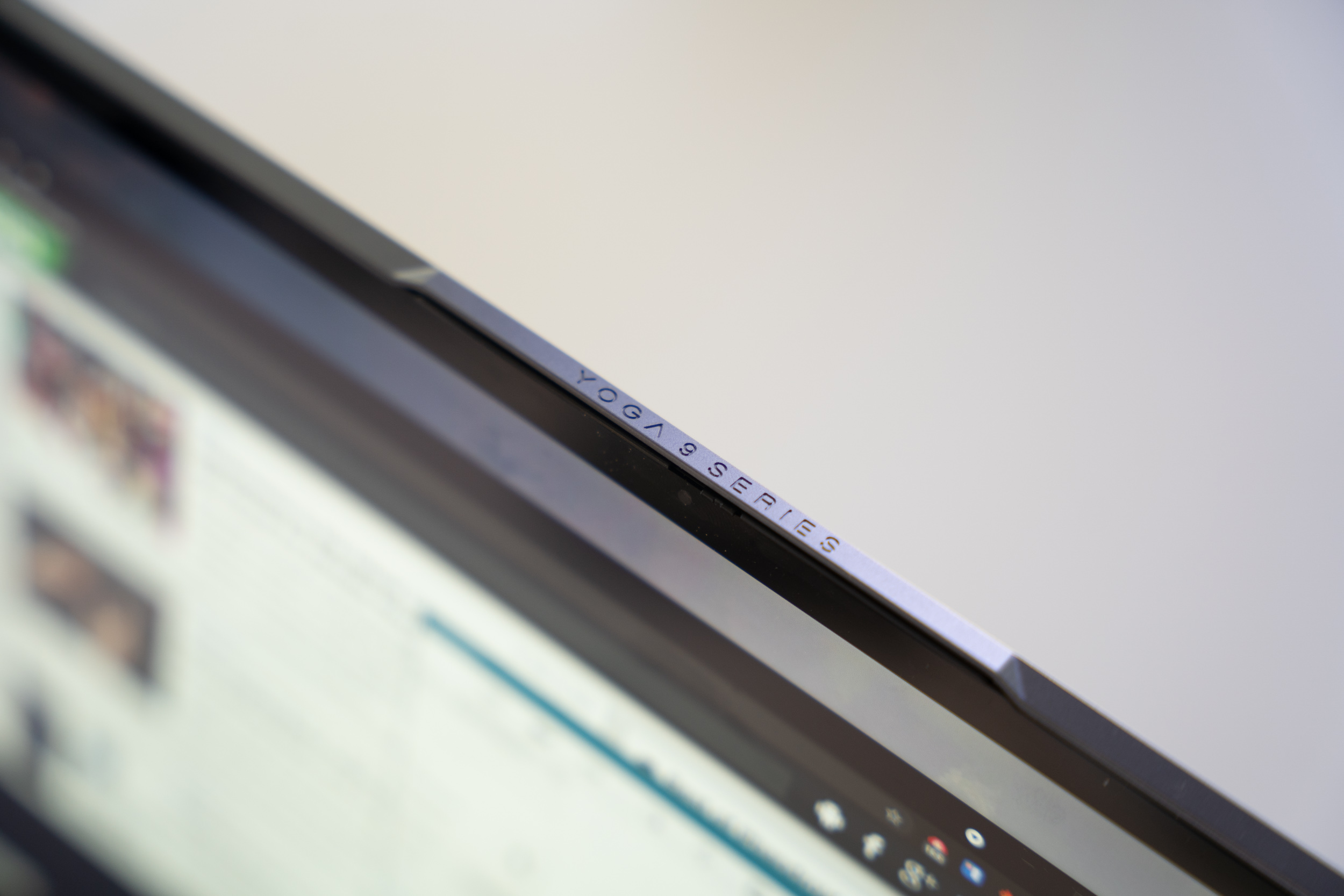 Those who divide their laptop time between catching up on emails in the morning, editing files in PhotoShop or Illustrator, and then jumping into Premiere Pro for a few hours to wrap up a video should be able to get about 5 hours between charges with roughly half of that 5 hour period dedicated specifically to video editing. Cut video editing or any other task that leans heavily on the GPU out of your daily workflow and you can easily get 6-7 hours.

I would definitely recommend taking the massive charging brick with you if you’re planning on spending a whole day working away from your desk. Being able to charge the laptop over USB-C with a much smaller charge would have been nice, but if you’re pushing the laptop to its limits, a 100W PD charger wouldn’t be able to keep up.

While the Yoga 9i showed up at my doorstep a few weeks before I built myself a custom desktop PC for video editing, I still use it a lot more than I expected. The simple answer to why the Yoga can pull me away from a custom-built PC is because Lenovo has built an incredibly versatile laptop with very few compromises.

Being able to have a portable workstation that I can take with me everywhere I go is something that’s extremely hard to pass up.

The Lenovo Yoga 9i is an incredible laptop for those looking to get some serious work done. If all you need is a laptop for some light word editing between catching up on Facebook and your favorite shows on Netflix, there are plenty of laptops that will do the trick for less than half the price.