SUPCASE cases are here to protect your Samsung Galaxy Note 20

We’ve all experienced the heart-wrenching moment when you drop your smartphone. Suddenly everything becomes slow-mo as you watch your $1,000 hit the ground. Sometimes it ends up being OK, sometimes there might be a scuff mark or two, but sometimes, you end up with a shattered display or a dent.

When you’ve paid this much for a smartphone, like the Samsung Galaxy Note 20, you sometimes feel like you’re going to start crying. As careful as we are, it would be impossible that there is no instance during the ownership of a phone that we do not drop it at least once, if not by your hands, then at the hands of someone else.

This is why getting a case for your new smartphone is an important step and also an important consideration, especially if you’re looking for something that’s truly rugged enough to keep your brand new Note 20 protected. If you are seeking a case that will provide you with some of the best protection, then you might want to take a gander at what SUPCASE has to offer.

SUPCASE has been making rugged protective phone and tablet cases for years, and so they’ve applied their expertise to the Samsung Galaxy Note 20. This comes in the form of two different types of cases for Note 20 owners to choose from – the Unicorn Beetle EXO and the Unicorn Beetle PRO. 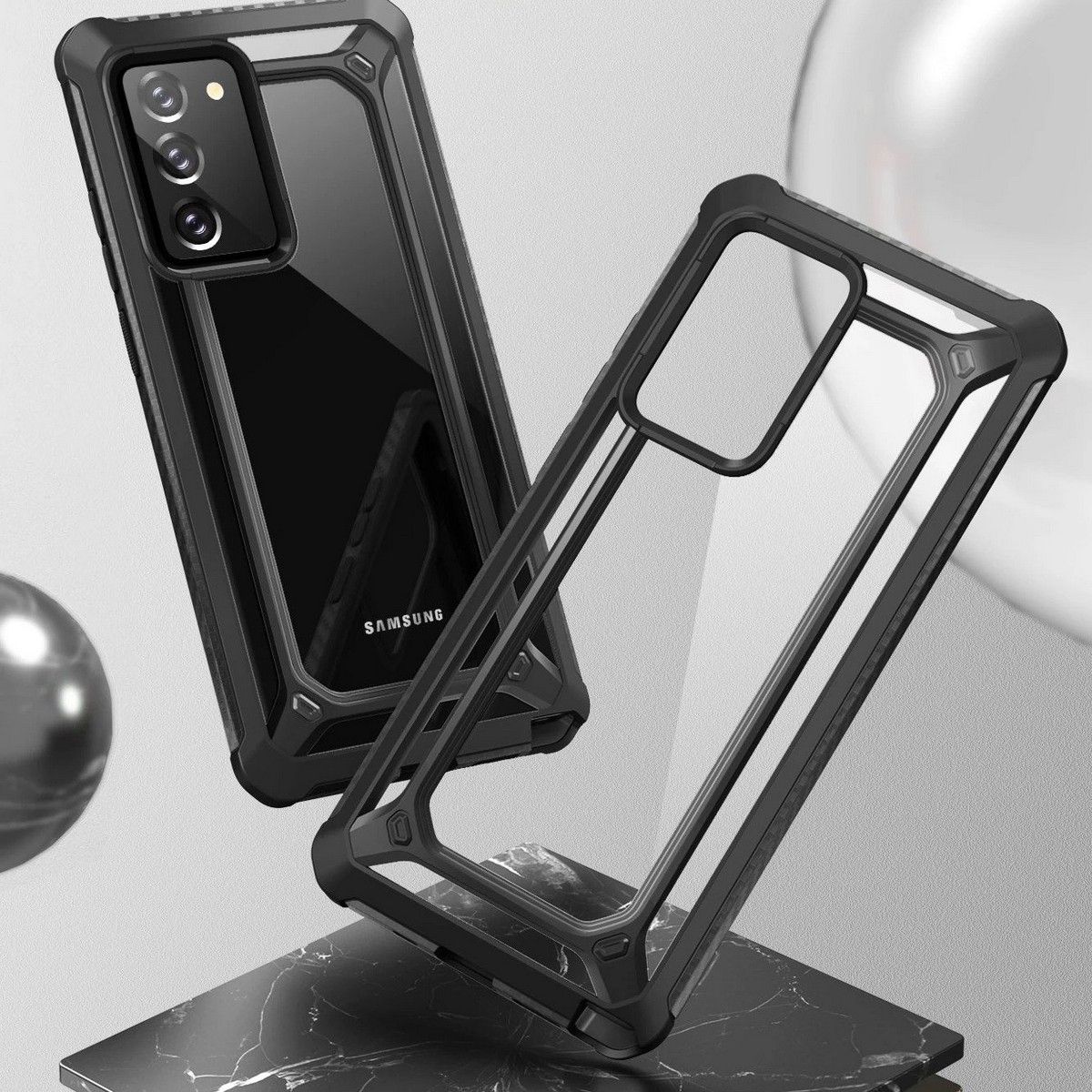 For those who are looking for a case that’s a bit more minimalistic, then the Unicorn Beetle EXO might be the case for you. It features TPU bumpers around the edges and corners of the phone, along with a clear backing so that you can still see some of your phone’s design.

Its exoskeleton back frame has also been designed to provide enhanced grip on surfaces, meaning that it lowers the chance of you accidentally swiping your phone off the table and onto the floor. It also provides the phone with a bit of elevation to help prevent the camera lenses from getting scratched. 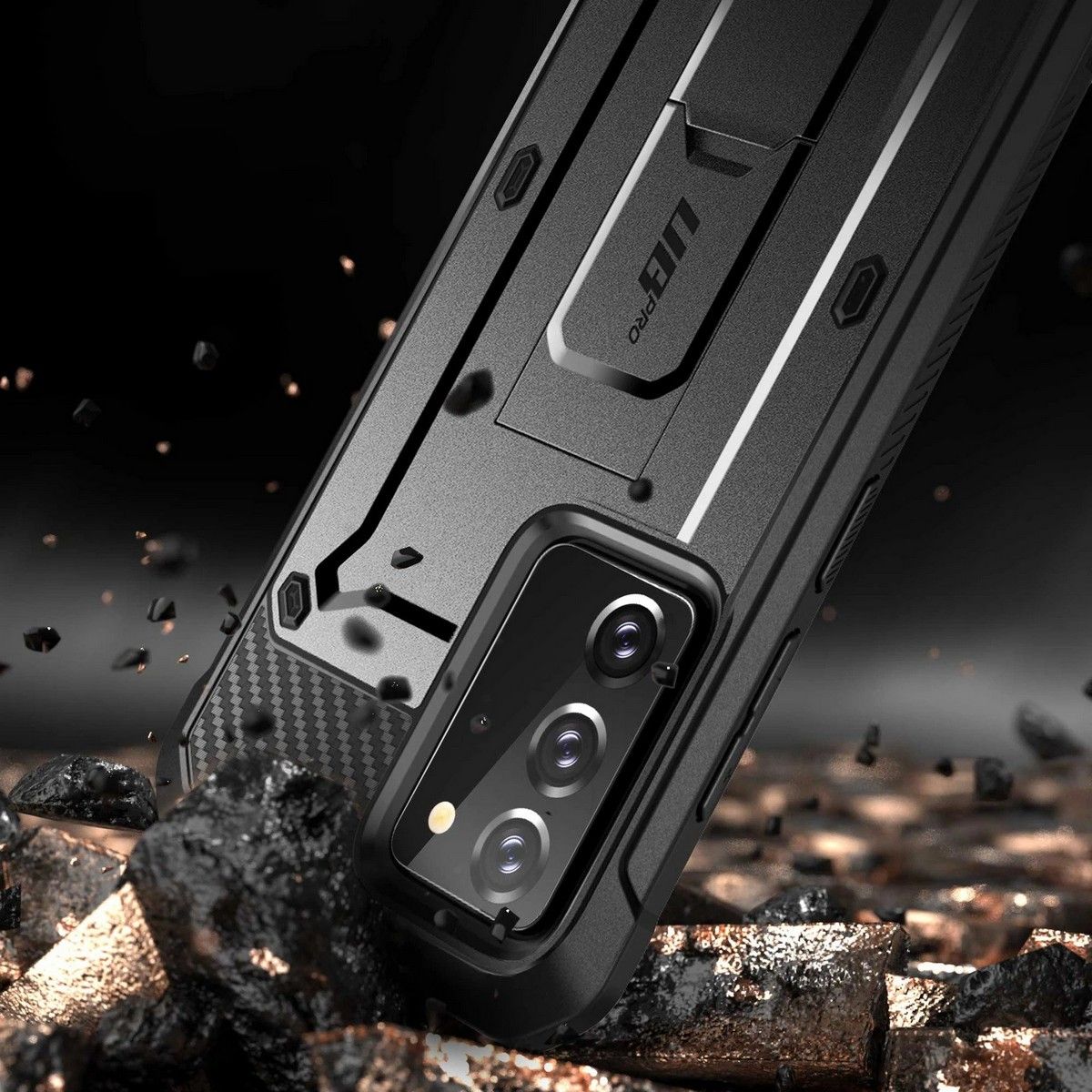 In case you wanted even more features and protection for your Note 20, then the Unicorn Beetle PRO might be the answer. Similar to the EXO, it features TPU bumpers all around the phone to help make it more drop-resistant, scratch-resistant, and also accidental bumps.

There is even a kickstand so that you can prop the phone up at an angle to watch your movies, or it can even act as a mini tripod of sorts for you to take photos or when you’re having a video call. The kickstand provides 3 different viewing angles and even doubles up as a ring holder for a more secure grip.
SUPCASE is even providing users with a free rotating belt clip holster if you prefer keeping your phone within easy reach.

Like we said, SUPCASE has been in the industry for a few years now and are known for creating relatively affordable rugged phone cases that won’t cost you an arm and a leg. The company lays claim to being the first company to own CNET’s annual drop test back in 2018.

The company’s cases have been rated MIL-STD-810G 516.6, but despite that, SUPCASE’s cases appear to have gone above and beyond that in real-world tests. Based on tests conducted by various organizations and publications, it appears that the company’s cases can help phones survive drops from as high as 50 feet.

Chances are you probably won’t need to test that out yourself, but if a device wrapped in SUPCASE can survive a 50 feet drop, we’re sure it will survive a short drop from the table to the ground, or from your pocket to the pavement.

About the Samsung Galaxy Note 20

The Samsung Galaxy Note 20 is the latest flagship handset from Samsung, and it is also their most powerful device to date. The phone comes with a massive display with a 120Hz refresh rate, a triple camera setup system that features a 108MP camera sensor, combined with a laser autofocus system that helps ensure that every shot is in focus.

The phone also packs a Qualcomm Snapdragon 865+ chipset under the hood with 12GB of RAM, making it quite a beast in terms of performance and turning it into the ultimate gaming smartphone. There is also a S Pen stylus that makes the Note series one of the more unique smartphone lineups, allowing users to quickly jot down notes or make little drawings while on the go.

closeOnePlus Nord N10 and Nord N100 unveiled for Europe, heading to the US as well

Oneplus has just unveiled two new phones, setting a record for the number of new devices the company had launched in a single year. The two new phones are within the new OnePlus Nord family, delivering budget-friendly smartphones while maintaining that unique OnePlus DNA.The OnePlus Nord N10 5G is the more expensive of the two, …