With more and more devices in our lives, we have more to charge every night. We have phones, smartwatches, tablets, earbuds, game consoles, and more. And each one requires its own charger, which is not only annoying to keep around, but the wiring mess on your nightstand is an eyesore. Pitaka aims to fix all that with the ultimate charger, the Omni Air.

Made primarily for the Apple ecosystem but working just as well for us Android folk, the Omni Air is a six in one charger that features two wireless charging pads, an Apple Watch charger, a charging stand, a USB-A port, and a USB-C port. But beyond that, it has a few tricks up its sleeves. 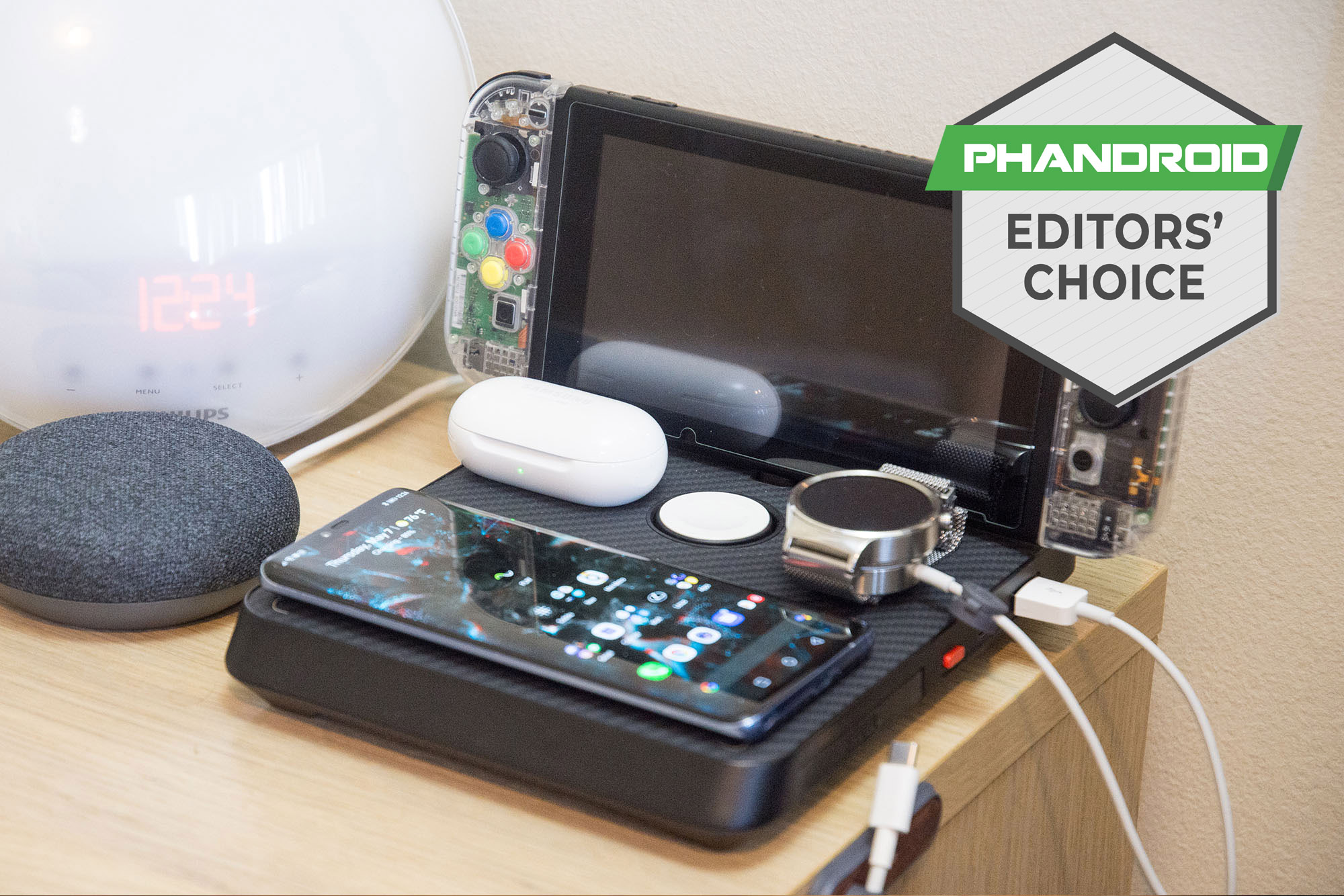 The first thing you’ll notice is the sheet of aramid fiber on the top. This may look like carbon fiber, but carbon fiber is conductive whereas aramid fiber is not. It looks modern and sexy, though it might not fit every interior aesthetic. Still, it sure is pretty.

The main charging surface has two wireless chargers. The lower one has three coils and charges at 10 watts. You can put your phone on there pretty freely and not have to worry about lining it up perfectly. The second coil above and to the left provides 5 watts for your earphones like the AirPods (with wireless charging case) or Galaxy Buds+. 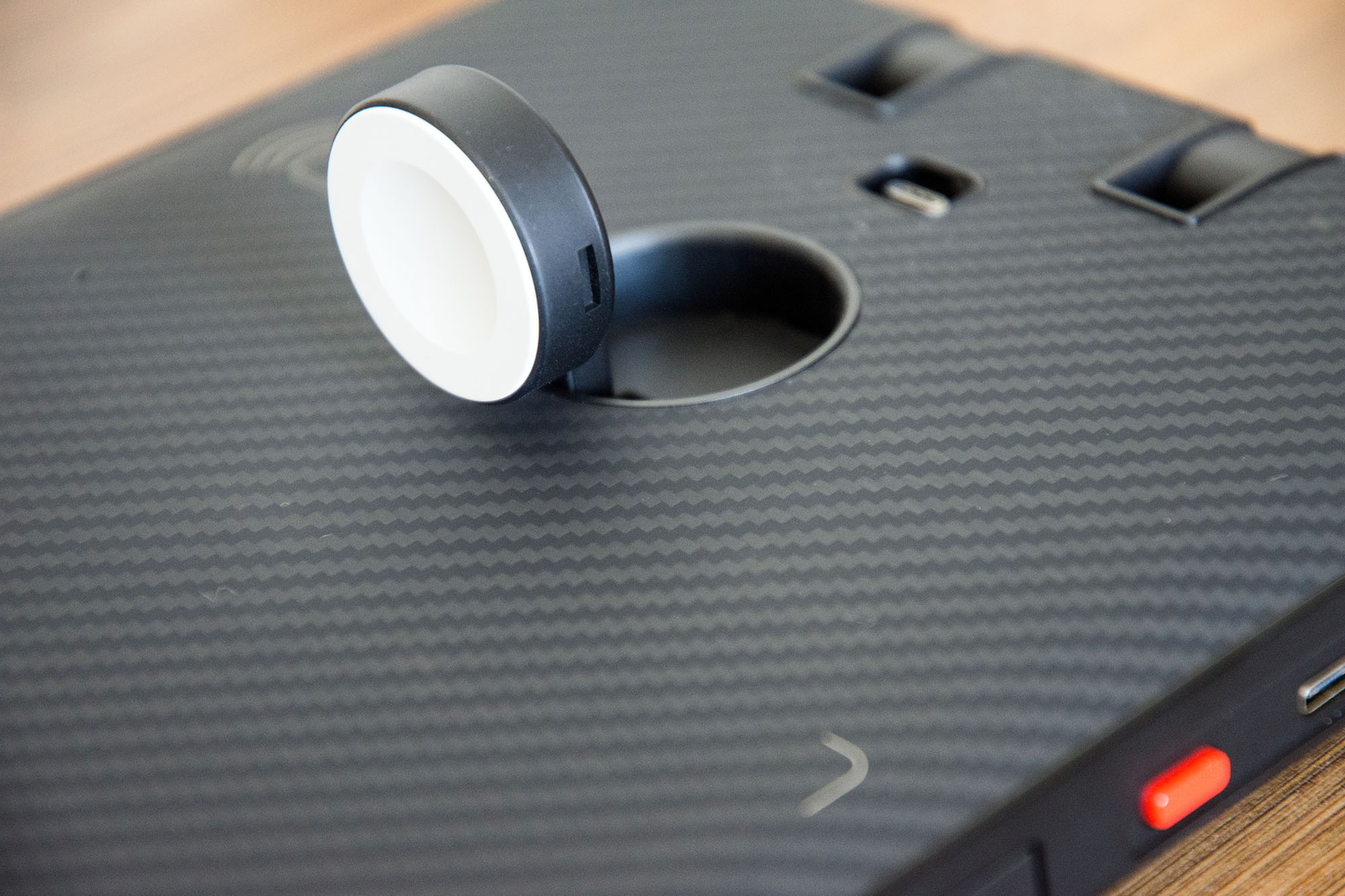 Next to that is an MFi-certified Apple watch charger. This is the one thing that really doesn’t apply to Android users but Apple people will love it. Unlike many chargers designed for the Apple Watch, this one comes built in with the puck rather than you having to put in your own. And if you have a band that doesn’t separate, hit the red button on the side and it pops up so you can put the watch around it.

Behind that you’ll find a small slot with a Lightning connector inside. Flip the stand up from underneath and watch that connector rise up. This is so you can charge devices standing with some support, like an iPad or non-wireless charging AirPods. But when the stand is folded down, hit the button on the back and the Lightning connector is replaced by a USB-C connector. Now you can charge your Android tablet or Nintendo Switch with 18 watts of Power Delivery, plenty to charge almost any device. 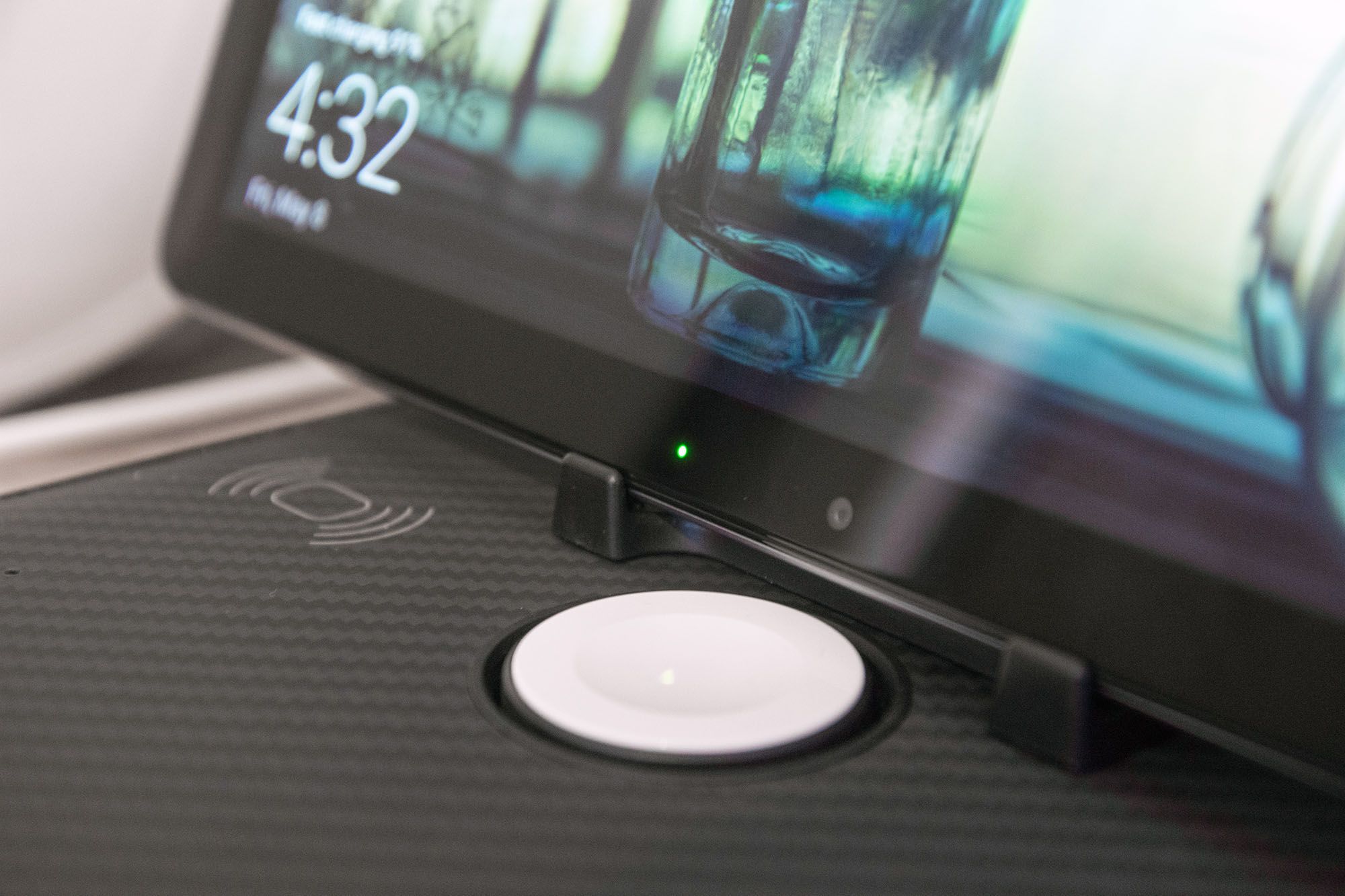 Also included is a small magnetic attachment that goes right in front of the USB-C stand and allows you to prop a tablet on it sideways, using it as a stand to watch content on your tablet in landscape mode. You can also charge it via one of the ports on the side. 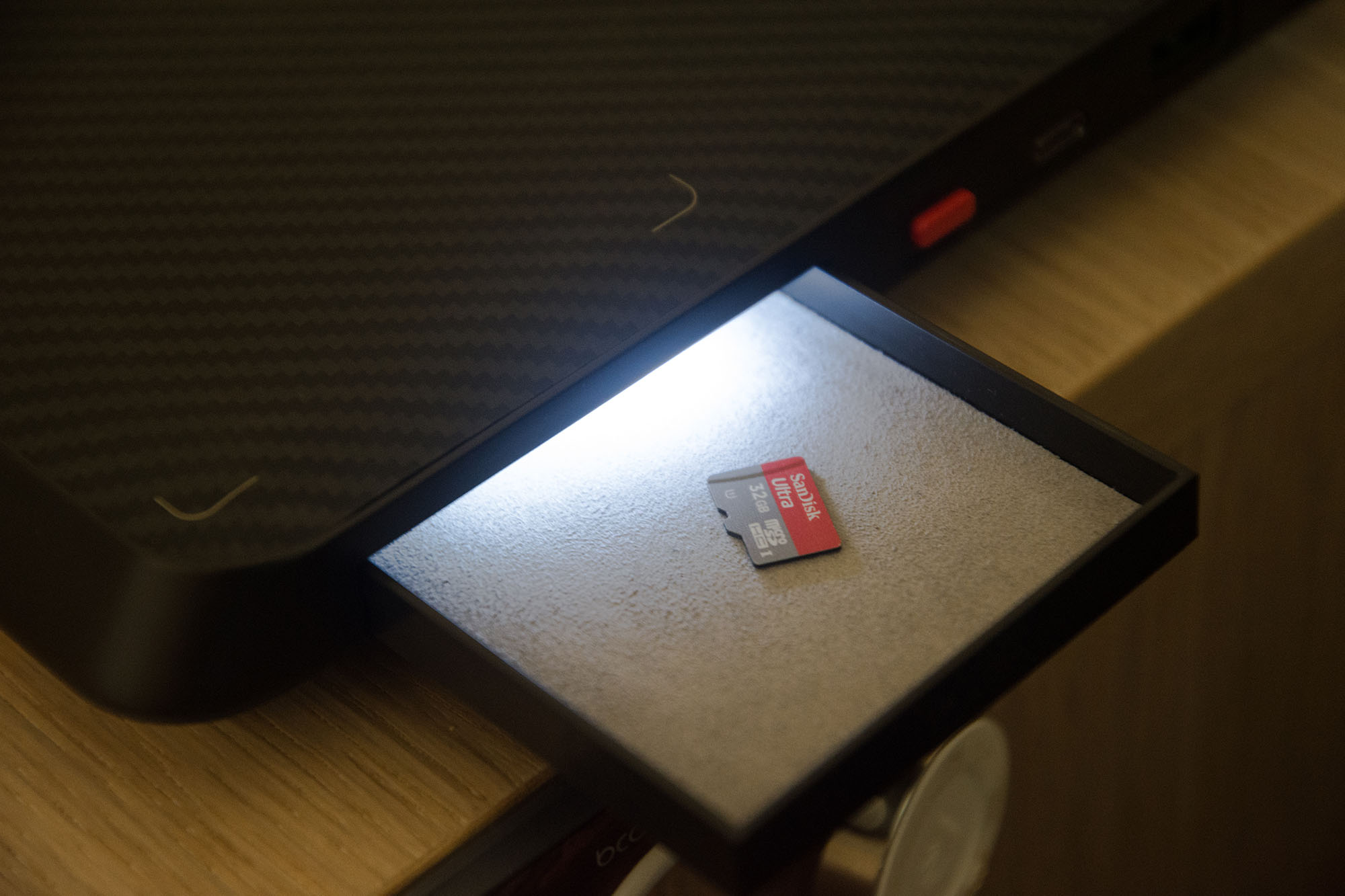 One little trick that’s harder to find is the tiny drawer in the side. Press on it and it slides out, allowing you to store necessities or valuables in a hidden way. This drawer even has a light! Definitely a nice touch.

If you have a lot of chargers by your bed, this is an awesome way to clean up your setup. It replaced two USB hubs by my bed powering a bunch of loose cables. Now I can charge my Switch, phone, earphones, and watch all from one charger. Sadly the Apple Watch charger goes unused, after all this is an Apple user’s dream, but the rest of the features apply to both camps.

And best of all, when you travel, you can take one charger with you instead of a mess of cables. If the Kickstarter reaches its stretch goal, a portable case will be available to buy. It’s not the smallest charger, but it’s only 1.8 lbs and fairly thin.

The only real issue with the Omni Air is price. The MSRP is going to be $199, which is very expensive. Part of the pricing comes from the premium aramid fiber construction and the inclusion of both MFi-certified charging ports and an MFi-certified Apple Watch charger. These add cost where similar products may not include the Apple Watch charger or have any certification. Another part of it is the multitude of ports that do fast charging rather than the regular old 5V/2A.

But in the end it’s a premium product that makes a huge impact to a messy charging setup and looks great doing it. My nightstand’s mess of cables is gone, replaced by one attractive platform that charges everything I use on the daily. And best of all, the Kickstarter still has two weeks to go as of posting this review. You can grab a few of the early bird specials that are left at only $129, and then there are plenty of kickstarter specials left at $143. At these prices it’s a much more affordable buy. 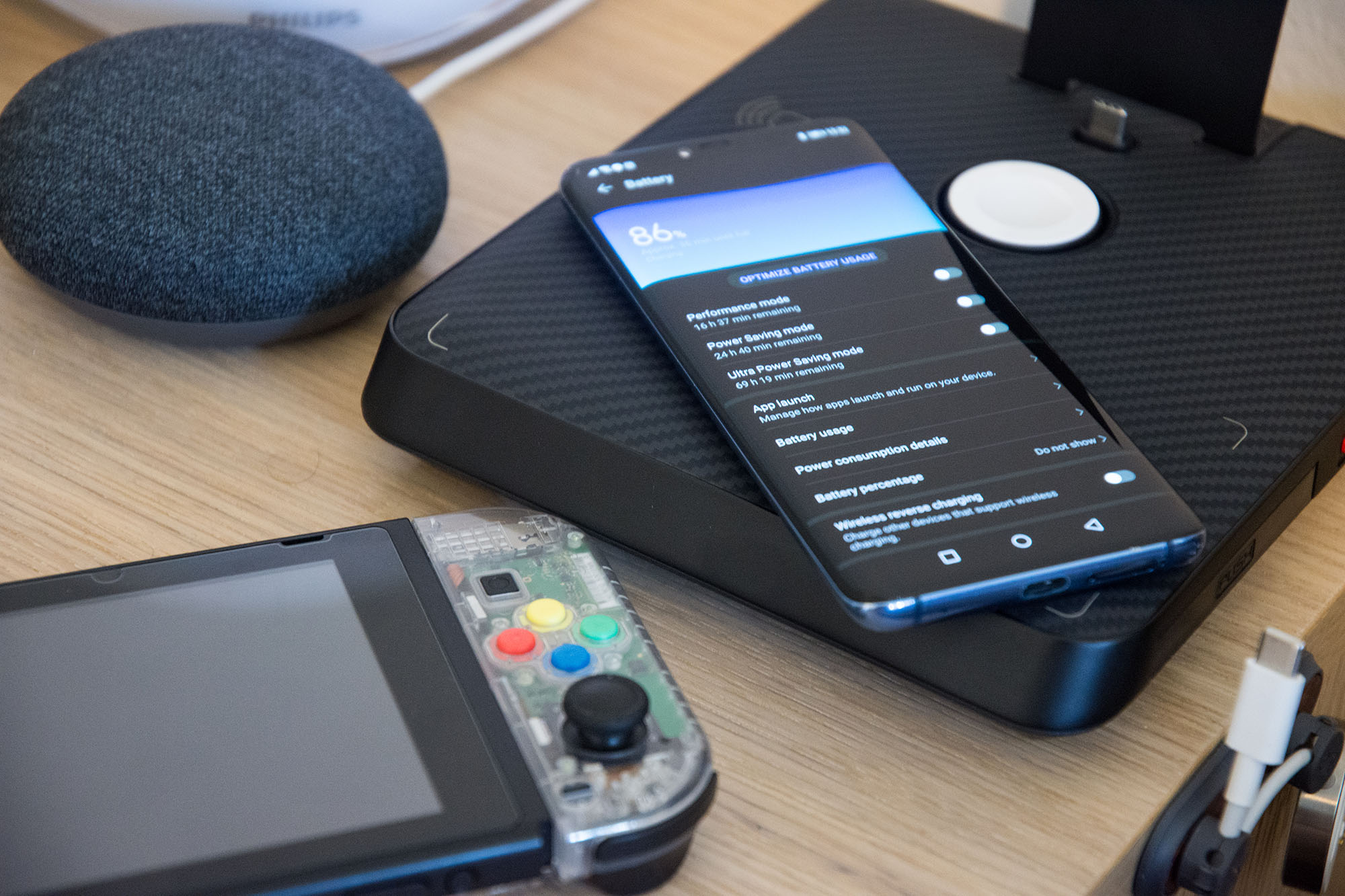 For an Apple user, this is the king of chargers. But if you’re an Android fan, as all of us are, don’t sleep on this one. The USB-C ports and USB Power Delivery support all make for just as good an experience for Android as it does for Apple, even if that Apple Watch charger will never see any use.