I have to be honest, when I used the Galaxy S20+ at the launch event last month in San Francisco, I was a bit underwhelmed. On one hand, you have this amazing phone that packs in all the latest tech, 5G, and a superb display, but all that seems a bit underwhelming when you consider its $1,200 sticker price. And let’s not forget that it’s not even the best Samsung has to offer. For that, you’ll need to shell out another $200 for the Ultra.

So, why would anyone really want to pay this much money for a phone? Well… let’s find out.

To start things off, I’d like to remind you that the Galaxy S20, S20+, and S20 Ultra are all essentially the same phone. The only things that differentiate them are their cameras, display, and battery sizes. The S20 and the S20+ are the most similar between the three since their only differences on the camera front are a lack of a depth sensor on the back which is honestly inconsequential.

All three come with the lastest Snapdragon 865 chipset which also means you get 5G connectivity. But the real step up over last year’s phones is the 12GB of RAM, bumped up from 8GB. To put that into context, these phones have 50% more RAM than most computers which is pretty insane.

No, adding more RAM doesn’t always solve performance issues, but Samsung’s RAM management on this phone is superb. You can literally have two dozen apps and games loaded in the background at all times, never having to wait for them to reload when you want to jump back into them. Yes, this may save you only a few seconds here and there, but it makes the overall experience so much more enjoyable when an app or game opens instantly. 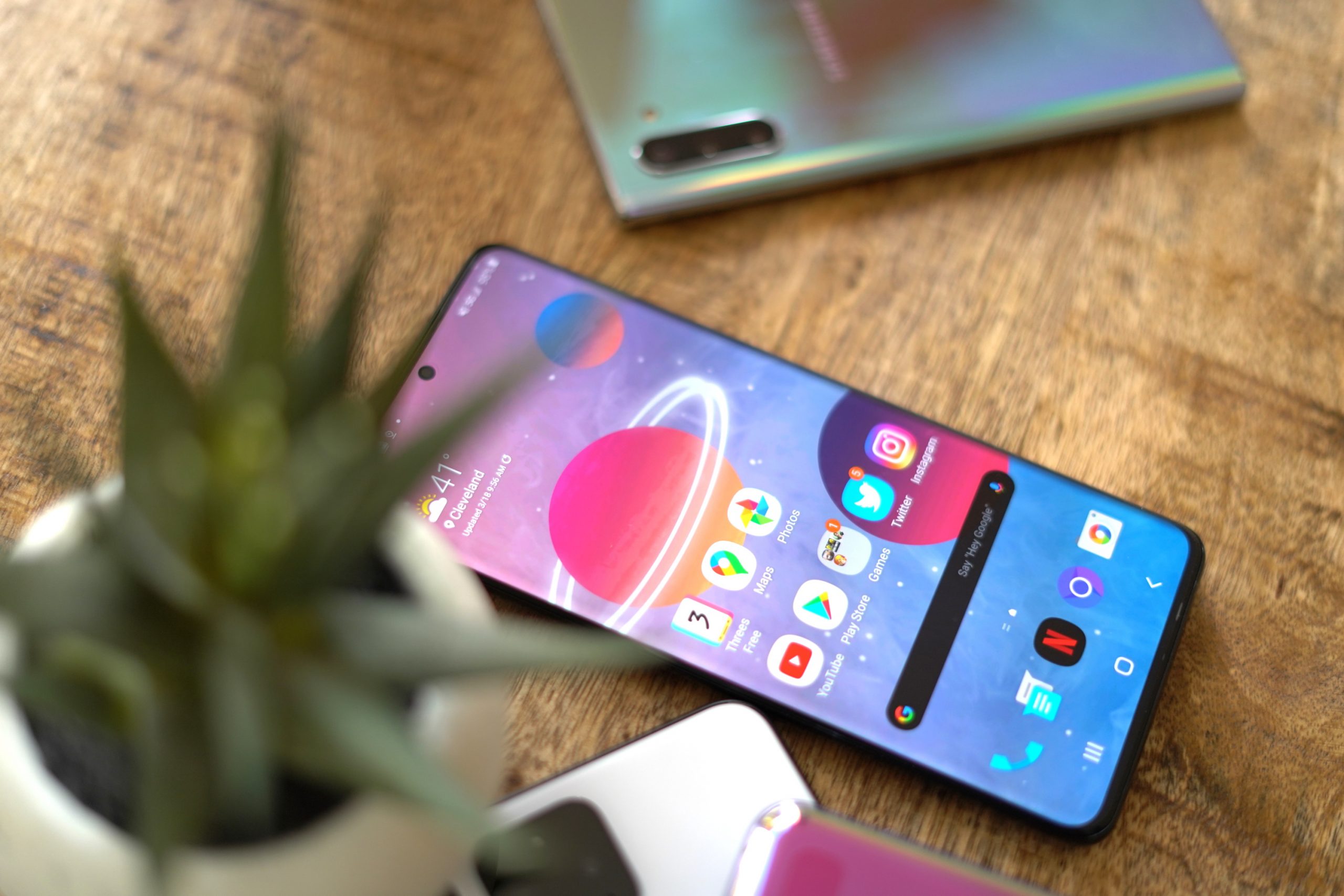 The only place where Samsung skimped out a little was with the phone’s 128GB of storage. For $1,200, I’d expect at least 256GB, but at least you still get a micro SD card slot if you still have one of those laying around.

As is the case every year, Samsung is among the first to deliver a phone with the newest chip from Qualcomm. This time around that’s the Snapdragon 865 and as you’d expect, it’s fast and more power-efficient than the last variant. But while this phone is incredibly fast, you’ll have a hard time feeling the difference between it and last year’s S10+ unless you have them side by side. The real advantage here is that every phone with the 865 chip also comes with 5G. Of course, we’re still not seeing any of the promised speed improvements from any major US carriers with the current low band or mm-wave deployments, but they’ll come eventually and when they do, your S20+ will be ready to take advantage of them.

Protect your Samsung Galaxy S20 with these 12 amazing cases

One issue in the hardware that I’d like to call out is Samsung’s choice to go with Qualcomm’s ultrasonic fingerprint sensor again. While in-display optical fingerprint sensors have gotten faster, larger and more reliable, Qualcomm’s tech is pretty much the same. I complained about how slow it was on last year’s S10+ and it doesn’t look like it’s gotten any better. It works only about 80% of the time, forcing me to enter my unlock pattern after multiple failed attempts.

For me, the most disappointing aspect of these new phones comes down to the design and color options. If you’re a case user, you can completely disregard this complaint. That being said, I think Samsung phoned it in this time around, especially since the last flagship we got from them was the Note 10 with its iconic aura glow finish. By contrast, the S20 lineup is positively dull and uninspiring. 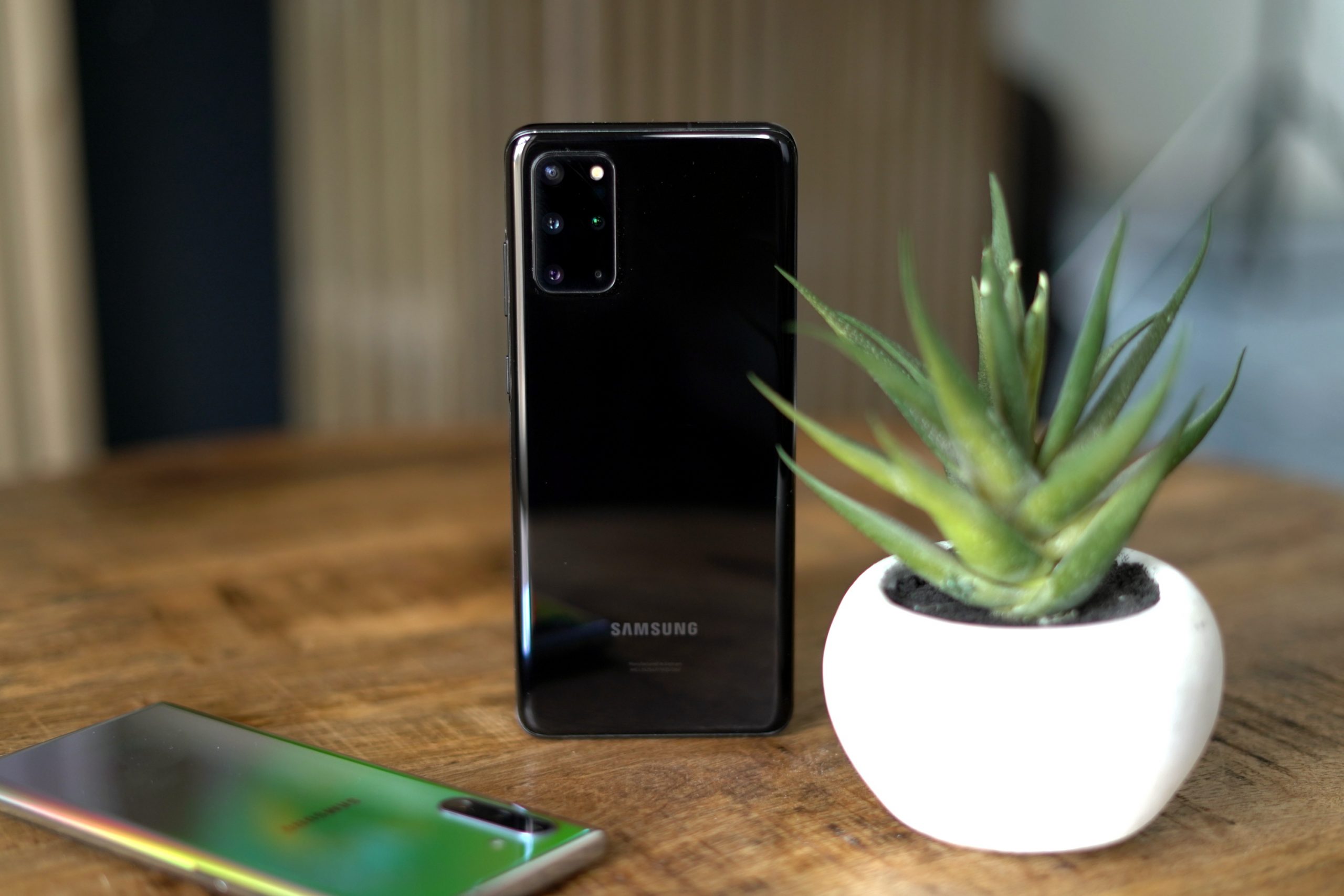 But that’s not all bad news. Usually, my number one complaint when it comes to Samsung phones is the curved display. Despite what you may have heard, Samsung didn’t do away with it completely. It’s still there, but it’s barely noticeable. Leading to fewer accidental touches with the side of your hand and a lot less glare along the top and bottom of the screen when watching a video in landscape. If you’re using an older Samsung phone, it may be worth the upgrade just for that.

OK, I’m kidding on that front. The real reason you might want to upgrade is for the phone’s 120Hz refresh rate. By default, the 6.7-inch display’s quad HD+ resolution only delivery a 60Hz’s refresh rate, but you can bump that up to 120Hz if you’re willing to change the resolution to FHD+.

No matter what people tell you, there is a noticeable difference in clarity between the two settings. But with the higher refresh rate enabled, the phone feels so much smoother. Personally, I made the switch after 3 days with the phone and have not looked back. It will cost you a bit on the battery side, but from what I can tell, it doesn’t make a huge difference.

For as much praise as the Galaxy S20 Ultra has gotten for its 108MP main camera sensor and 100x hybrid zoom, the Galaxy S20+ may actually have a better camera since the software and hardware seem to work exactly as advertised. The main camera setup uses a combination of four sensors paired with standard, ultra-wide and 3x telephoto lenses with a ToF sensor thrown in there for better depth sensing and AR effects. The front-facing camera only has a single sensor, but it captures great images nonetheless. 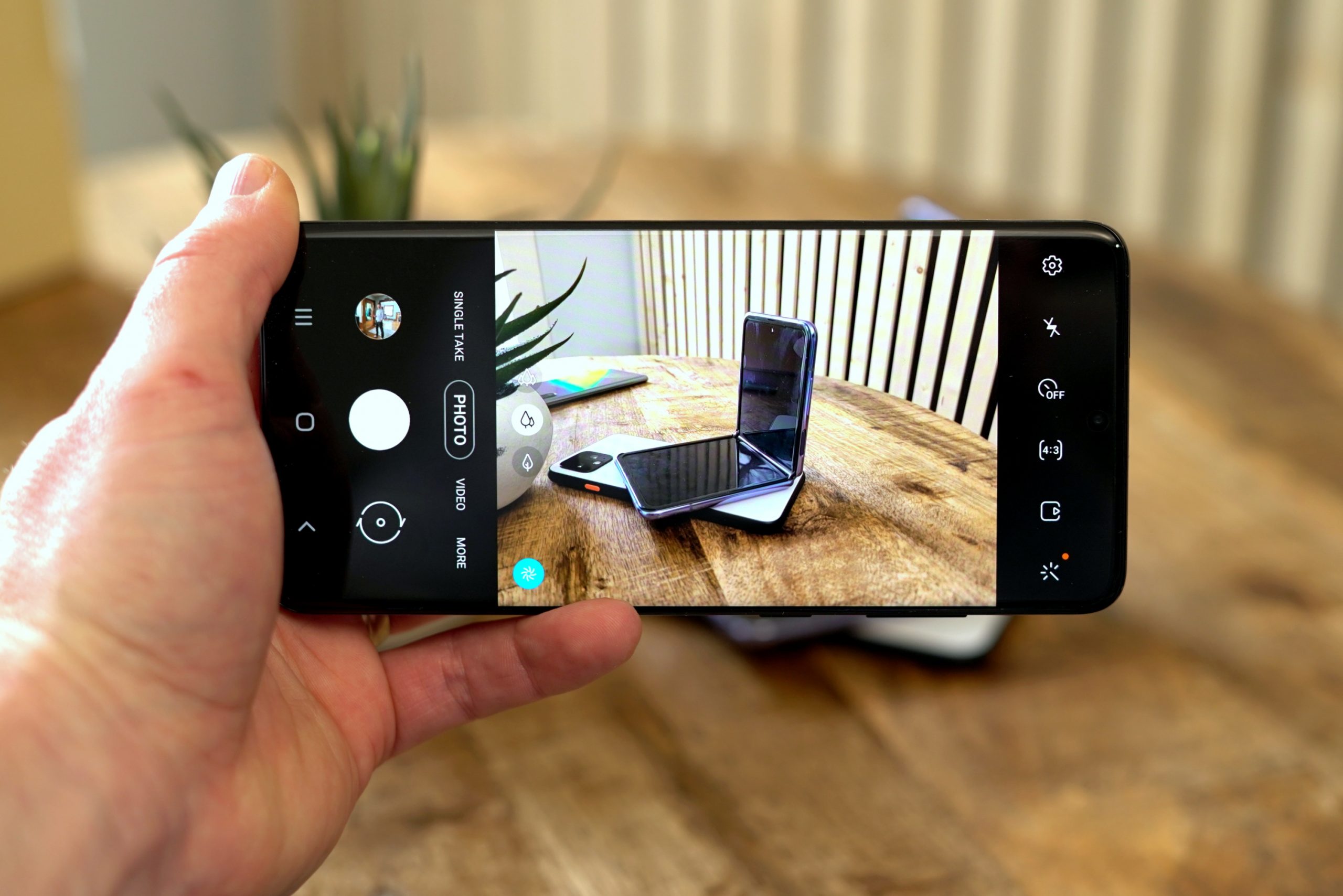 If you’re upgrading for an older Samsung phone, you’ll definitely notice the improvements. Images are crisp, low light performance is spectacular, especially when using night mode and you also get 8K video capture. That last one may be a bit of overkill since 8K TVs are still extremely expensive, but at least you can future proof all your videos starting now.

The only downside is that Samsung does a bit too much post-processing in its images, over smoothing people’s faces to get rid of imperfections and overcompensating a bit too much on HDR photos. The first issue can be toned down a little in the settings, but the only way to remove Samsung’s beauty mode completely is by switching to manual mode in the camera app which is a bit disappointing. 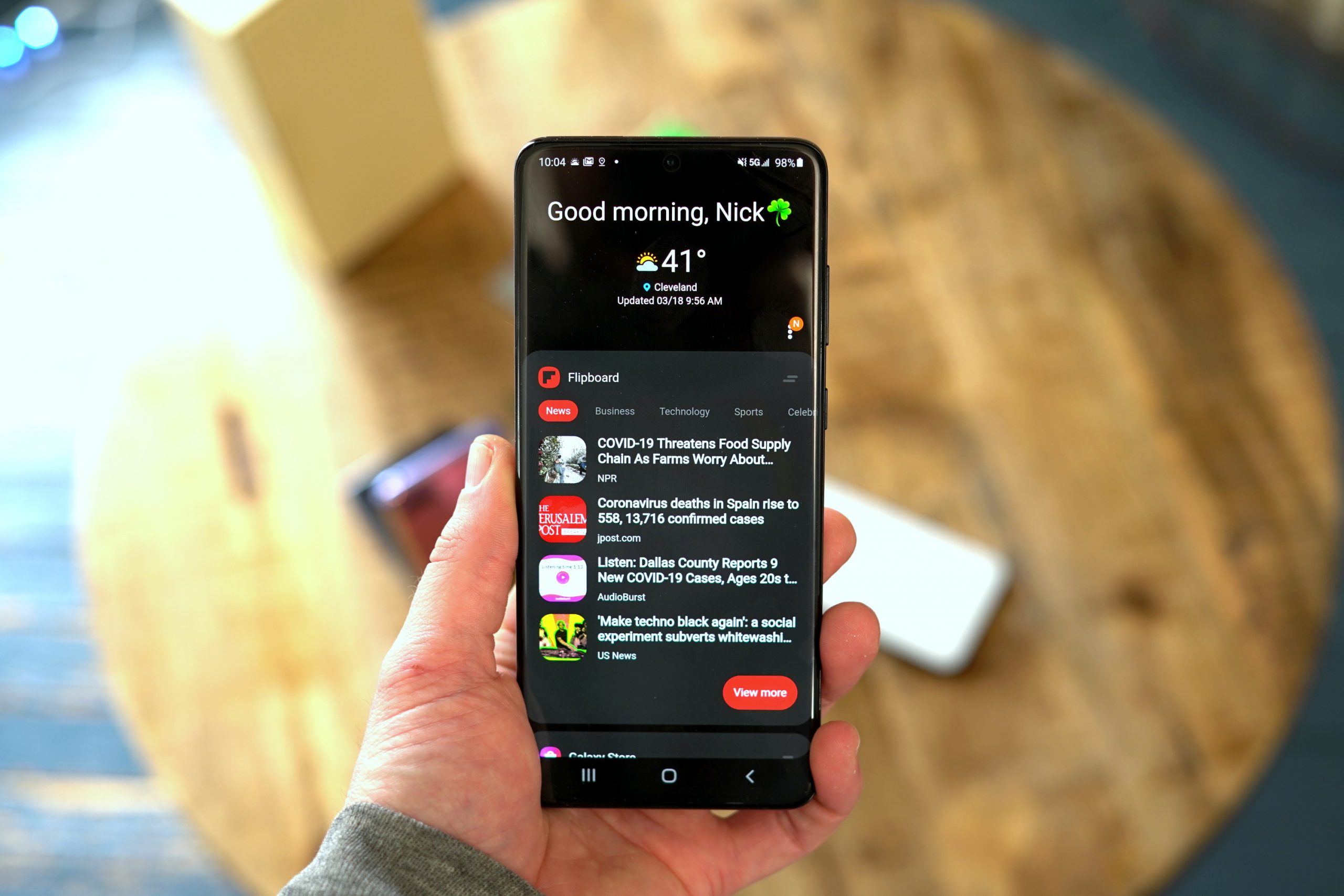 The software is the same, across the line. And what Samsung touted hundreds of tweaks in the latest version of One UI, it’s really hard to spot the minute differences. Compared to stock Android, it still feels a bit bloated, especially once you jump into the settings. Case in point, if you want to find out about the phone’s battery status or tweak its settings, you need to know that it’s hidden inside the Device Care section., which isn’t the most obvious place to put it.

And then there’s Bixby. I get that Samsung has hundreds of millions of customers and that if only 5% of them use the service it makes financial sense, but it’s a horrible service when compared to the Google Assistant and the Bixby daily screen is obnoxiously slow, taking 2 seconds to load each time you accidentally swipe over to it.

My recommendation is to turn it off or just install a third-party launcher from the Play store.

One thing I really enjoy on the S20+ is its 4500 mAh battery which is a little more than 10% larger than the S20’s 4,000 mAh cell. It’s not quite enough to this a two-day phone, but you’ll have a really hard time killing it off in a single day unless you’re willing to play Call of Duty Mobile for 7 hours straight. This finally makes Samsung’s reverse wireless charging feature quite useful since you should typically have quite a bit of power to spare to charge up your friend’s phone.

When you finally do run out of power, topping the phone off takes a little over an hour with its 25W fast charging or about two hours if you have a 15W wireless charger. 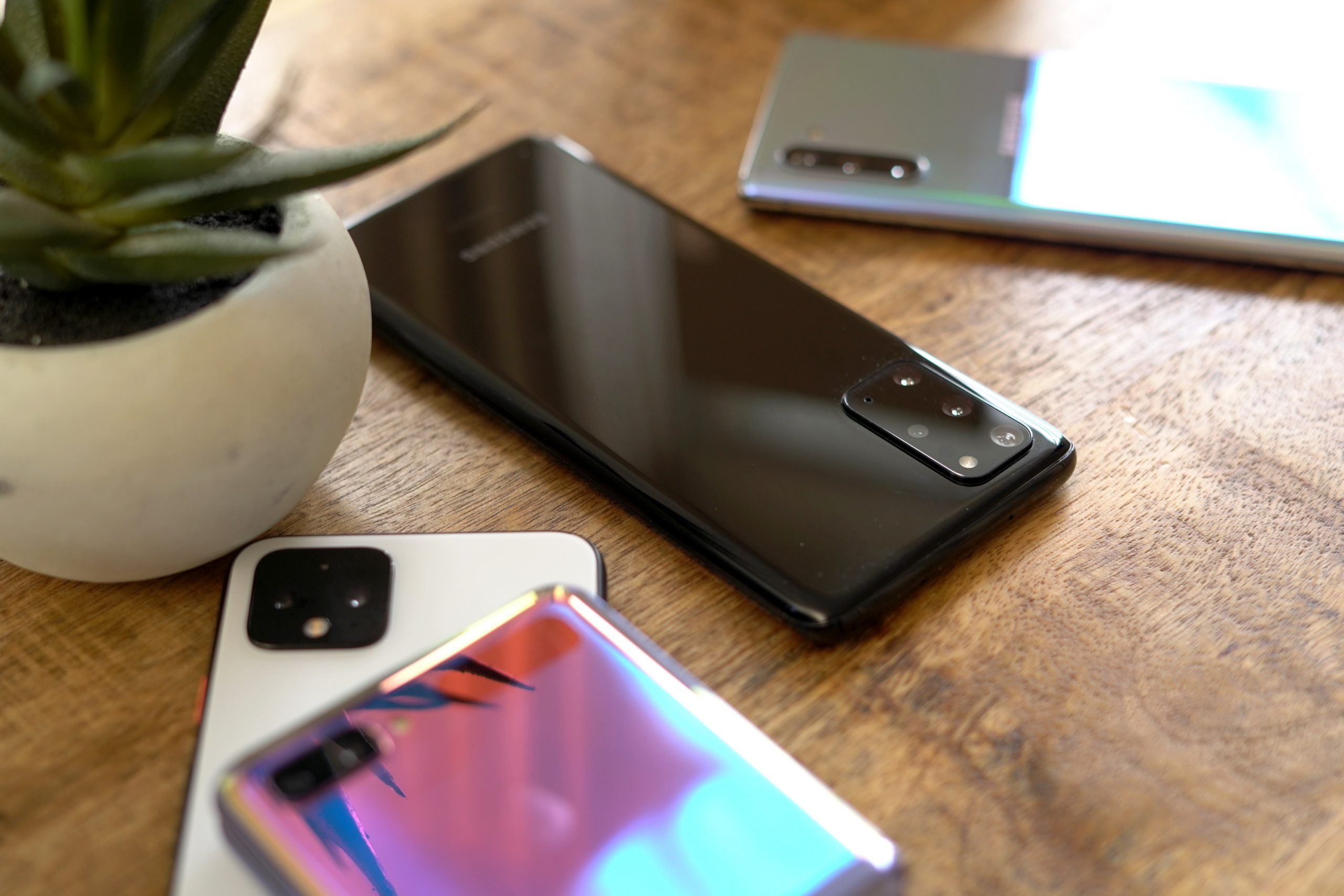 Overall, the Samsung Galaxy S20+ is a great phone, as long as you can get over its $1,200 price tag. Personally, if I had to choose between the S20 and the S20+, I’d go with the smaller sibling. The added half-inch of screen real estate and 12% bump in battery capacity, to me, are not worth the $200 extra Samsung is charging for the S20+.

But if dropping $1,200 doesn’t scare you away, the Galaxy S20+ is probably the most perfect smartphone Samsung has ever built, just as long as you have an extra 30 bucks to spend on a case to cover it up.

The price and the phone’s generic design make the Galaxy S20+ feel like an underwhelming smartphone. But if you don’t mind dropping $1,200 on a smartphone, the phone camera and impeccable performance make the Samsung Galaxy S20+ one of the best smartphones we’ll see in 2020.

This article may containt affiliate links that help support the writers and keep the lights on.