The emulator for Microsoft’s upcoming Surface Duo is now out in the wild, leading to our very first look at the user interface and gestures Microsoft has build on top of Android for its dual-screen smartphone.

Since most will likely forego downloading the emulator to test it our for themselves, Jonas Daehnert (AKA PhoneDesigner) took the time and put together a recording of the main interface while also showing off the various split-screen modes that Microsoft has added to Android.

In context – this feels even more magical. pic.twitter.com/8yLLoioE1K

For the most part, the Microsoft Surface Duo Android UI works exactly as we’d expect a dual-screen device should. Users will have the option to use two different applications at a time (one on each screen) with the ability to drag and drop apps from one screen to the other.  If developers update their apps to take advantage of the new form factor, their apps will be able to display information on both screens at the same time with controls or menus on one and details of the app on the other.

As shows in the image above, the Microsoft Surface Duo will include a variety of different dual-screen display options for applications which will give app developers quite a few options to choose from.

While we applaud Microsoft for its forward thinking, we hope that the work its doing for the Surface Duo is something it is collaborating with Google on to make sure it ties back to core functionality for Android. As we’ve seen over the years, the operating system can be extremely flexible, but there are plenty of examples of one-off developments which never really catch on.

While we’re extremely excited to the usual flagship smartphone updates we’ll be seeing in the first half of 2020, the Microsoft Surface Duo is the device we’re looking forward to the most this year. Long-considered an Android adversary, Microsoft could become a major player in the Android space over the coming years. 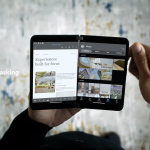 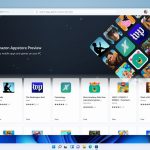