Google reinvents the Chromebook with the Pixel Slate

Google’s Chrome OS and Chromebooks have been around for years, but Google is hitting the reset button with the unveiling of the Google Pixel Slate. The new tablet offers a completely new experience, giving users productivity in a more mobile form factor. The Slate is thin and light with rounded edges and a balanced bezel on all sides, making it the perfect device for surfing the web or sitting back and enjoying your media. It’s a far cry from the utilitarian Chromebooks of the past and feels significantly friendlier than last year’s Pixel Book.

The body of the Pixel Salte is a bit thicker than 7mm and weighs 1.6 pounds which is thinner and lighter than most other 12-inch tablets on the market. The display features a resolution of 3,000 x 2,000 pixels with a new technology which allows electrons to move 100 times faster than they do in a standard display. The Slate also features stereo speakers which direct the audio directly at the user. You also get 2 USB-C posts so that you can plug in multiple accessories (in addition to the keyboard port on the bottom. Unfortunately, there’s no 3.mm headphone jack, so you’ll need to use Bluetooth or USB-C headphones if you want to enjoy your music or video without disturbing others, but Google is kind enough to include a 3.5mm to USB-C headphone adapter in the box. And for extra security, the power button on the side also doubles as a fingerprint sensor. 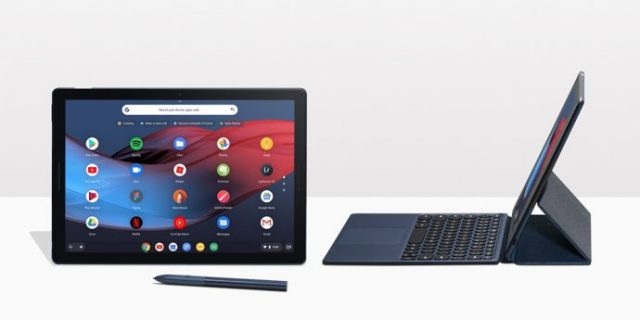 The official Pixel Slate keyboard features full-sized backlit keys which are round and quiet. It also includes a full-sized trackpad. The folio design of the keyboard allows you to use the Slate at different angles thanks to a magnetic connection between the tablet and the keyboard. And when you’re done with your work, the keyboard then folds over the front of the Pixel Slate to act as a protective cover. 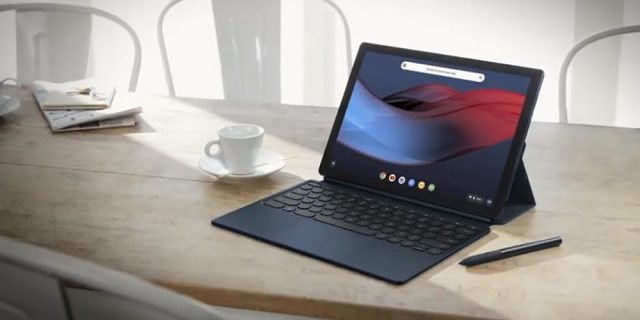 With its front and rear 8MP cameras, the Pixel Slate also uses Google’s computational photography tech so that you can take amazing images. Users will also be able to take portrait shots an have the background of the image digitally blurred. The front camera also comes with a wide angle lens and improved low light photo and video capture making ideal for video conferencing.

The software experience is pretty much what you’re come to experience with new Chrome OS devices. You have split screen support, integrated Google Assistant. And App launcher which suggest which apps you might be looking for, Android and Linus app support. That being said, the Pixel Slate will jump into a “tablet” mode when the keyboard is not connected. This means that your windowed apps expand to full-screen mode, but things switch back to the standard windowed view as soon as you’re docked with a keyboard again.

Google’s official Pixel Slate Keyboard will set you back $199 and the tablet is also compatible with the $99 Pixel Pen. Google will start selling the Pixel Salte and its accessories later this year in the US, Canada and the UK.