For many folks, battery life is one of, if not the most important part when deciding whether or not to upgrade to a new smartphone. Every year, smartphone manufacturers promise improved battery life. This is almost always due to advancements in more efficient processors and optimized Android software, but it doesn’t always translate into actual real world use.

The Galaxy Note 8 comes equipped with a 3,300mAh battery. It’s a tad smaller than the Galaxy S8+’s 3,500mAh battery and a puzzling move, one that could negatively impact battery life, however small. It’s possible Samsung was trying to avoid last year’s issues with the Galaxy Note 7’s battery not having enough room inside its shell and decided to err on the side of caution.

By now we know that battery life is one of those things that will never be the same for any two people. Even when dealing with the exact same devices, there are too many variables at play. Whether it’s apps installed, cellular signal, or services running in the background, all I can do is compare the battery life I’ve been receiving with other similarly equipped devices.

I’ve been spending the better part of a week with the Galaxy Note 8, enough that I can accurately predict the kind of battery life I — and hopefully you — can expect from the phone. Here’s what I found…

Battery life was pretty on par with what you’d expect from the Galaxy S8+. I was consistently hitting 4+ hours of screen on time, sometimes just barely 5 hours before completely exhausting the battery. This roughly translates into “all-day” battery life, but if you’re shooting a lot of video or gaming on the phone, you’ll probably need to top off at some point in the day.

Interestingly enough, the Always On Display had somewhat of a big effect on standby battery life. This is in stark contrast to something like the LG G6 which has their own version of this feature, yet barely sips the phone’s battery. The good news is AOD doesn’t activate when inside your pocket or purse, but if sitting on your desk all day, you’ll definitely lose a few percents over the course of the day. It’s nothing too terribly dramatic (about 1% every hour), so just turn it off if you aren’t getting much use out of it, especially if you’re not plugging in overnight. 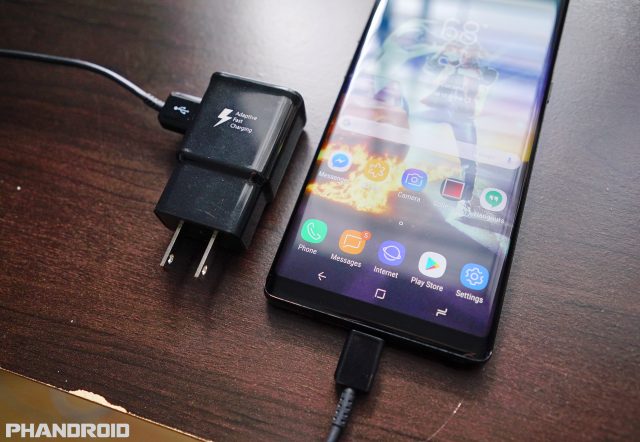 My biggest gripe with the Galaxy Note 8 is its charge times. Now, we’ve seen a lot of advancements in fast charging technology over the past few years. Motorola has their own 30W Turbo Charging technology, Google’s using the USB compliant Type C Power Delivery (3A) on their devices, OnePlus has Dash Charging, while Qualcomm has been touting Quick Charge 4.0 as the next big evolution of fast charging.

The Galaxy Note 8 on the other hand is still using the same old Adaptive Fast Charging tech that debuted all the way back on the Galaxy S6. It’s the equivalent of (and compatible with) Quick Charge 2.0. While it’s definitely faster than what you would get with the iPhone 7, it still doesn’t compare to competing technologies.

For instance, unlike Quick Charge 2.0, 3.0, and 4.0, Adaptive Fast Charging doesn’t work while you’re actually using the device. That’s to say if the screen is on, a notification will tell you that your phone is “Fast Charging” but what it doesn’t tell you is that it technically doesn’t work until the screen goes off. It’s a pretty big caveat, one Samsung never mentions and you wont find on any other device from a competing manufacturer. That being said, if you want to take full advantage of Adaptive Fast Charging — don’t use the phone. 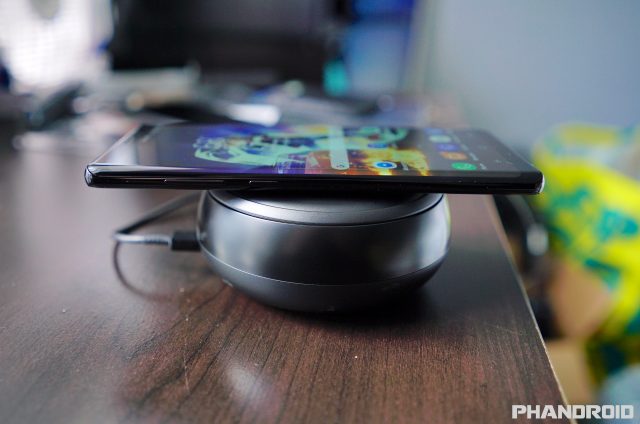 One high note is that the Galaxy Note 8 — like the S8 and S8+ before it — still includes wireless charging. The phone works with both WPC and PMA, takes the guesswork out of compatibility. With news that Apple is now adding wireless for the iPhone 8/X, we could see a resurgence of the technology as it goes mainstream inside of restaurants, coffee shops, automobiles, and the like. You may not use it all the time, but you’ll be happy when you can charge up wirelessly while drinking your PSL. 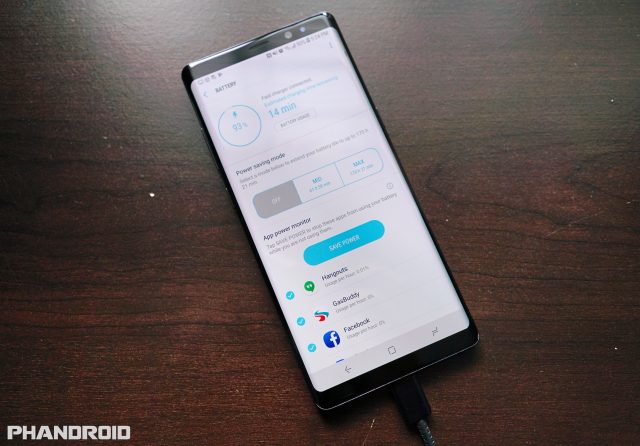 Battery life is a pretty damn important spec — arguably the biggest for some folks — and if you were worried about the Galaxy Note 8 not performing as well as other devices — don’t be. We’d love to hear your thoughts. Any Galaxy Note 8 owners out there care to chime in with their battery life results?