Now that the LG V30 has arrived, it’s the perfect time to see how well it stands up against its predecessor, the LG V20. There are quite a few changes between these two devices, as LG has opted to perform a complete design overhaul while removing some of the best features that were found with previous V-series devices.

Before jumping too far, let’s take a look at the displays. The LG V20 packed a 5.7-inch display, which included the secondary display, while the LG V30 turns things up a notch, moving up to an even 6-inches. However, the biggest difference here comes with the removal of the secondary display, as LG has opted for a floating action bar, which can be moved around the screen to your likely. 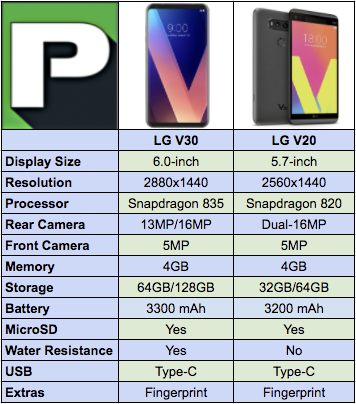 Keeping with the display, we see LG’s bezel-less design from the LG G6 arrive on the V30, offering a 2:1 aspect ratio and a resolution of 2880×1440 pixels. This will give you more screen real-estate without forcing you to perform too much in the way of finger gymnastics while using the device.

The final big design change between these two devices comes with the overall design itself. Gone is the removable battery and metal body, as LG brings the glass and aluminum design of the LG G6 to the forefront while including a sealed battery. This allows for the LG V30 to be IP68 water and dust resistance, along with wireless charging for the 3,300mAh battery. 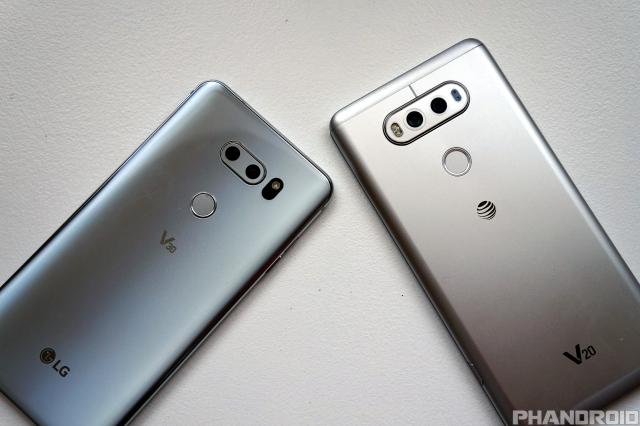 As for performance, we see that LG is using the flagship Snapdragon 835 SoC, to go with 4GB of RAM. This is the same amount of RAM that was found in the LG V20, which has continued to perform well into 2017 for those who opted for the device late last year. As for storage, there’s a slight bump as the V30 will be offered in either 64GB or 128GB options, versus the 32GB and 64GB options found in the V20. Luckily, the microSD card slot has returned, so you can expand your storage up to 2TB.

The cameras also see a slight change, moving from the dual 16MP shooters that were found on the V20. Instead, the V30 will be using a 16MP sensor for standard shots, along with a 13MP wide-angle lens, similar to what was found with the LG G6 launched earlier this year.

There are some who have the opinion that the LG V-series will take over as LG’s premier flagship device moving forward, and it definitely seems to be the case with the LG V30. With flagship-level specs and an all-new industrial design, this may be the real deal.

Let us know whether you’ll be upgrading from the LG V20, or if you’ll be sticking with another device that has taken the place of your daily driver.