How BioShock Rewrote the FPS Rulebook

Videogames have a wonderful habit of taking us to unforgettable imaged places, but, to paraphrase Dorothy, there’s no place like Rapture. An undersea metropolis built by Objectivists and, by the time the player arrives, destroyed by deregulation, its decrepit bathysphere tour warmly welcome us to an utterly hostile and sinister environment. But Rapture’s not just a virtual tourism destination. The setting for 2007’s BioShock has become iconic not just as a visual allegory for 20th century philosophies, but as the subterranean venue in which the first-person shooter was reborn.

Whether you’re new to BioShock or a fan of the franchise, you can now stream BioShock Remastered on NVIDIA SHIELD with a GeForce NOW membership ($7.99 a month and free to try out for one month). BioShock 2 Remastered is also available to purchase via GeForce NOW for 75% off its regular full price for a limited time, and comes with an additional free key to download the game on PC.

In 2007, games were becoming accustomed to a new definition standard. HDTVs made their way into people’s homes, and boxy CRT screens in their beige enclosures were being phased out by sleeker, sharper widescreen displays. Some games used the new definition afforded by that screen and hardware technology to sharpen up textures and narrow the gap between E3 sizzle-reel and final release.

BioShock, a beautiful game in its own right, wielded it differently. Suddenly able to render messages on posters and incidental items throughout its world at a razor-sharp, readable resolution, developer Irrational Games used the environment of Rapture itself as a narrative device.

An early example proves central to the plot: the ‘Who is Atlas’ posters plastered throughout Rapture’s leaky corridors and once decadent ballrooms served as foreshadowing devices to a famous twist, and also as nods to the famous first line in Ayn Rand’s Atlas Shrugged: “Who is John Galt?” Rand’s book was, naturally, central to the idea of Rapture: like John Galt, Rapture’s founding father Andrew Ryan creates a new settlement in which the elite can pursue their individual goals free from society’s shackles, and market regulation.

Irrational employed this newfound environmental storytelling power on a macro scale, with echoes of Nazi architect Albert Speer’s harsh concrete monolith and hard lines in Rapture’s construction, and on a smaller scale. It was evident in the departure boards for the long-destroyed bathysphere transport system, all reading ‘cancelled’. Lurid ‘Adam’ dispensers, bookended by nightmarish bobblehead girls. Art deco advertising posters, tugging on insecurities about appearance to promote the use of dangerous, ultimately disastrous, drugs. In almost any direction you look, BioShock is telling you the story of what happened down here in this bizarre dystopia, and it’s doing so in a way that games simply hadn’t been doing.

What BioShock’s HD Mise-en-scène also conveys by the bucketload is how well-read it is, and as such what a stark contrast it cuts to its contemporaries from the same period. Remember, 2007 was hardly a time of wild intellectual exploration for the FPS, but BioShock went against the grain. Its story asked questions about free will versus determinism, and explored the implications of the Objectivist philosophy that truth is independent from perception, and that only true moral purpose is individual fulfilment. Ask a Splicer about those ideals and they’d provide an illuminating response.

References to Irrational’s reading list are scattered across BioShock’s dense environments. The most immediate is companion character Atlas, named after Rand’s novel. Andrew Ryan’s name, too, is a partial anagram of Ayn Rand and the surname ‘Wynand’ on the player’s fake passport references Gail Wynand, a central character in Rand’s The Fountainhead. But as the literary dystopias like Aldous Huxley’s Brave New World and Stanislaw Lem’s Eden materialise in various forms throughout Rapture, historical and biblical nods join them. Adam and Eve, for example, the two drugs that facilitate use of plasmids to modify the physiology, and are ultimately responsible for the downfall of Ryan’s perfect society. Or Neptune’s Bounty, Apollo Square, and Olympus Heights, each location a homage to Roman or Greek mythology.

Literary references do not maketh the game, of course, and it’s hard to see how most traditional first-person shooters might have been bettered with the inclusion of Sun Tzu quotes plastered throughout its in-game environments. Rather than simply high-minded set dressing in BioShock, these references are a by-product of the game’s astoundingly consistent harmony between narrative and gameplay. It isn’t simply a shooter set in an amalgam of the books it references; it has something to say about them. And it makes its points using you as a conduit.Game theorists like to talk about

Game theorists like to talk about ludonarrative dissonance and consonance. It’s the idea that a game might reinforce its story with the specifics of its gameplay, or that the two might run completely contrary to one another—protagonists shooting hundreds of people and doing untold damage to their surroundings in order to ‘save the day’ is a recurring example of the latter. BioShock doesn’t fit into either categorically so neatly, and that’s exactly what made it such a groundbreaking title. Yes, Irrational found a way to make what’s ostensibly a shooter with limited non-combat interaction into something genuinely analogous to it story and setting. But they also found a way to make the player aware of that; to point out the inherent illusion of choice in games. And above all, to prompt questions from the player about their role in the systems surrounding them.

To spell it out completely is to destroy the magic, but Plasmids are a prime example. Facilitated by the use of two powerful drugs, Adam and Eve, and intended to endow the user with superhuman abilities, they eventually turn users into mindless Splicers and prove the downfall of Rapture. They’re a dramatic visualization of the dangers of unregulated markets: no one was around to warn of these drugs’ harmful effects, and so in the laissez-faire capitalist society beneath the sea they took hold, became unexpectedly powerful, and led to ruin.

In the player’s hands, Plasmids are powerful abilities that modify combat encounters and in some cases provide a new attack. They’re an almost essential survival tool. Is the player subverting the message that Objectivism is bound to fail by harnessing the power of Plasmids and using it against Rapture’s hostile inhabitants, or actually reinforcing it? You are, after all, using Plasmids to pursue your individual goals.

The complex elements of BioShock are ready and waiting to be inspected and scrutinized, but they’re not imposed on the player. Indeed, there’s plenty in the way of technical bombast to focus on instead. With Ken Levine at the helm and the word ‘Shock’ in the title, this was a rebirth of immersive sim principles honed in System Shock and System Shock 2. Talking about RPG elements in shooters is rote now in 2017, but it all started here. Harnessing the new fidelity levels of the time, BioShock made light and darkness powerful, Plasmid abilities light up the screen, and grand, labyrinthine levels appear astoundingly vivid.Activities like hacking could now be depicted in visually interesting ways, and the choices you made about the strengths of your character defined the way combat encounters played out. It was the promise of a dream sketched out in celebrated late ‘90s/early ‘00s titles, realized beautifully.

Activities like hacking could now be depicted in visually interesting ways, and the choices you made about the strengths of your character defined the way combat encounters played out. It was the promise of a dream sketched out in celebrated late ‘90s/early ‘00s titles, realized beautifully.

And it made the experience emergent. And in 2007, that truly meant something. It meant that there was genuine enjoyment to be had by simply watching the gameplay systems interact. The unpredictability was a spectacle in itself. Perhaps it might manifest in a fight between some Splicers whom you’ve set upon each other using an Enrage Plasmid, or sitting back and watch a turret take out your foes. Guiding enemies into a puddle with your Electro Bolt Plasmid equipped, perhaps, ready to harness the water’s conductive power. Two literati thugs, one stone. 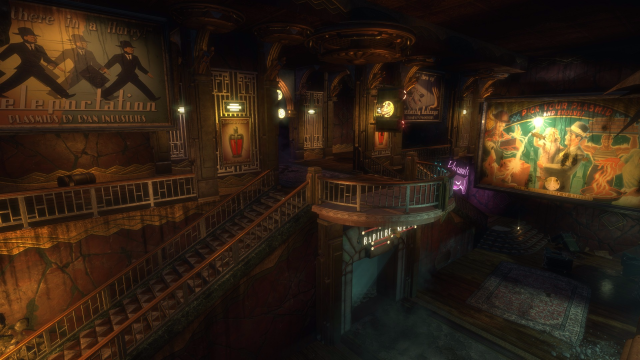 There have been other games with comparable levels of ambition—and successful execution since then. But Irrational’s 2007 release will forever be remembered as the game that seemed to come out of nowhere, and made us stop and think. Perhaps the global politics of the time had a hand in cultivating that perfect storm for Ken Levine’s team. It was, by Levine’s own admission, “a gray age” a decade ago, in which the moral implications of decisions made by world leaders were becoming increasingly difficult to decipher. Still deep into the UK and US’s occupation of Iraq and Afghanistan, there was a growing sense of distrust of authority that BioShock seemed to chime with perfectly when it arrived. It was the antidote to perennially popular military shooters of the time for whom there were no shades of gray. “When I play an ultra-patriotic game,” Levine told Wired at the time, “I’m not comfortable unquestioningly accepting what authorities say.”

Whatever circumstances had to come together in order to produce BioShock—morally ambiguous global news events, a sharp increase in the fidelity of our screens, or the culmination of decades worth of experience honing a sub-genre—come together they did. Perhaps the most telling thing about its ability to redefine first-person shooters is in how enjoyable the experience remains today, and how contemporary it feels in both its themes and its gunplay. There might always be a lighthouse, a man, and a city, but very rarely is there a game of this caliber.

BioShock and BioShock 2 are now available on NVIDIA SHIELD via GeForce NOW. A GeForce NOW membership is free to try out for one month, just $7.99 a month after that, with certain premium titles available to purchase separately including BioShock 2.