Listen to the Jay-Z 4:44 Album without TIDAL X Sprint

Rap superstar Jay-Z today launched his brand new album – titled 4:44 – exclusively on Tidal (the streaming music service that he owns). In an attempt to leverage his humongous following to build the Tidal brand, the company heavily promoted a 30-Day Free Trial that would theoretically allow new users to listen to Jay-Z’s tunes with no strings attached.

Those assumptions were false and likely propagated through social media.

The real deal is as follows- you have to either be:

We’ve listed another option below.

Since most people aren’t Sprint customers and are only now downloading Tidal for the purpose of Jay-Z’s 4:44, they fit in neither of those categories. Painful for hopeful Jay-Z fans, but Tidal might be feeling the most pain when all is said and done. As fans flock to download the app, input their free trial info, and press the play button on “Kill Jay-Z” – the album’s first track – they’re met with the following message: 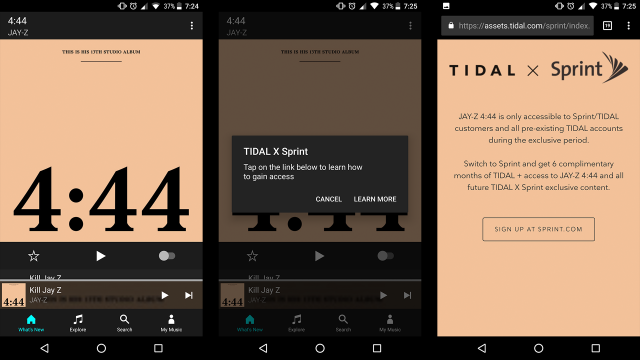 Ironically enough, that first track has inspired violent thoughts about Jay-Z without fans even having to listen to 1-second of the song itself. Don’t take my word for it, check out the 1-Star Reviews in the Google Play Store.

Don’t worry… we’ve got you covered (at least for the next 4 hours).

Today only, Jay-z’s 4:44 is being streamed on iHeartRadio and you can listen right here on the web. You can also download the iHeartRadio App and tune into the station named The Beat.

It will stop streaming at 12:01AM on July 1st, so you’ve got a limited amount of time before your early access to Jay-Z’s album expires. It will assuredly become available on other platforms in the near future, though.

As a huge Jay-Z fan myself, I’ve tried the fix and can confirm it works.

iHeartRadio has also gotten an inside glimpse behind the music and song meanings, which we’ve included below:

If this post helped you out, share this post on social media, hook up iHeartRadio with a 5-star review, and let us know what you think of the album in the comments!