Contrary to popular belief, Samsung won’t be the only manufacturer with the Snapdragon 835 in their phones. We’re hearing from a trusted source that HTC is gearing up to test their own device with that chipset.

HTC hinted toward that when they mentioned that their big new devices will always use the latest chipsets, and considering the HTC U Ultra is rocking 2016’s Snapdragon 821, we’d say they’re drumming up to something better. Here’s the original statement from Chialin Chang on the matter:

Every time there is a brand new CPU with power that we can leverage, we’re always at the forefront doing that. Some people are talking about the timing [of our release] but timing was determined 9 months ago. This is the best CPU out there. When the next flagship CPU comes, HTC will be one of the very first tier doing that.

When we will look back, it will be clear why HTC introduced [these new phones.] We want to have a couple of months of leadership before the next flagship CPU comes. But that will be in another period of time- not at MWC. Not for us or any other player. I can tell you that for sure. When the new CPU comes, HTC will have another flagship.

Sure enough, Samsung confirmed they won’t be at Mobile World Congress with their Galaxy S8, but likely with a tablet instead.

A rumor making the rounds earlier this morning suggested that the device in the works is dubbed “HTC 11” and would have 6GB of RAM and launch with Android 7.0 Nougat, however we have strong reason to believe it’s fake. 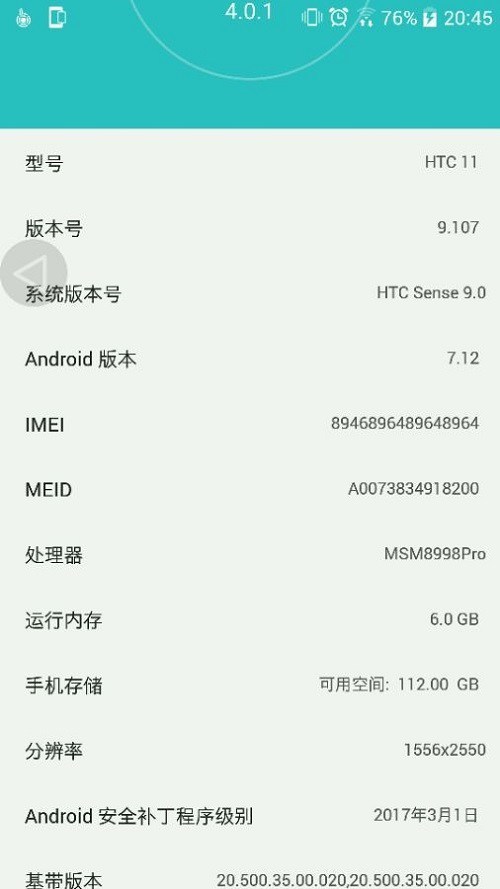 You can make a screenshot say anything these days.

The screenshot seemingly comes from Huawei’s EMUI software despite HTC-styled icons being in the status bar. Also, the IMEI number that shows in the screenshot doesn’t match up with HTC’s historic use of IMEI numbers which start with the numbers 3 or 9. We’re calling it fake, folks.

That’s not to say HTC doesn’t have something of that nature coming, but we aren’t going to bank on it based on a sketchy doctored screenshot from Weibo. Unfortunately, we still don’t know what their exact plans are, but you can bet we’ll share them here once we learn more.