No, apps on Android Nougat do not crash 2.5 times as much as apps on iOS 10

A new report out of Apteligent is making the rounds today suggesting apps on Android Nougat crash way more than those on iOS 10, and it seems some people are blowing the data they presented way out of proportion. That’s why we’re here to tell you that there’s no reason to panic.

Let’s back up a bit: Apteligent’s latest report looks into app crashes for numerous versions of both Android and iOS. What most people are failing to communicate in their reports is that these numbers are specifically for crashes which are caused by network error. In Android Nougat, 20% of the app crashes reported in the period between August 17th and September 15th were due to network crashes (a crash as a result of some sort of communication with the network failing, hanging, or otherwise erroring out).

To put the number into perspective, Apteligent compared it to iOS 10’s network crash rate of 8% and paraded around a figure that suggested Android apps crash 2.5X more than their iOS counterparts. That’s a big scary number! Except it’s not. When talking about overall crash rate, Android 7.0 Nougat is comparable to recent modern versions of Android at just over 6%. 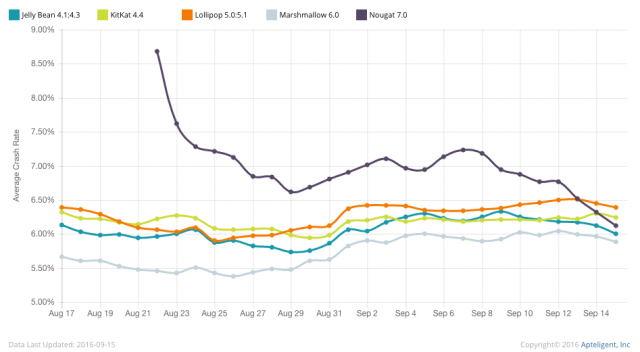 Apteligent’s report also included an alarming-looking chart which you can see above. The purple line is Nougat starting on its first day of availability. There are 3 things wrong with the way it’s being perceived:

So here’s what’s actually happening. Android Nougat apps in that range have only ever spiked as high as just over 8%. As of September 26th, that number sits at 6.44%, while iOS 10 sits at 4.1%. Looking at a similar chart for Apple’s overall crash numbers shows an initial spike to 5.39% before it fell to its current number.

And what Apteligent doesn’t clearly communicate is that not all of these crashes are necessarily faults of the OS — a lot of the times, developers aren’t accounting for network errors the best way they can, and if an unexpected error isn’t caught, down goes the app. Android Nougat’s involvement may be on a more superficial level if it’s found that the OS is somehow handling network code far differently than it has in prior versions, but we seriously doubt it.

So no, apps aren’t crashing 2.5X as much on Android Nougat compared to iOS 10. They are crashing more, but only slightly so, and the fact that there are thousands of devices — 24,000 unique ones, last we’ve heard — and countless variations on Android’s code running on those devices (vs Apple’s 4-5, including tablets, annually) will likely mean that standing will never change.

If anything, all this report tells me is that the adoption rate for new versions of Android is still really sad, and I didn’t need another reminder of the platform’s biggest long-time issue to know that. For the developers who are less interested in fear-mongering — not by Apteligent, but by others reporting on it — and more eager to check out some usable data for your needs, head here for the full report.